Buying a Traeger grill requires spending a serious amount of money.  Traeger’s price tags shock a lot of people, especially if they have just been checking out the Pit Boss grills at Walmart.  So what gives?  How come Traeger’s are so expensive and, more importantly, “Are they worth it?”

The answer is, “Traeger grills are not worth the money.”  When you buy a Traeger you will get a great grill but you will also be paying too much for their expensive departments of R&D, Marketing and Legal.

Let’s look at the components that go into the price tag of a Traeger grill in more detail, check out some alternative manufacturers and then look at the only Traeger that might be worth the money. 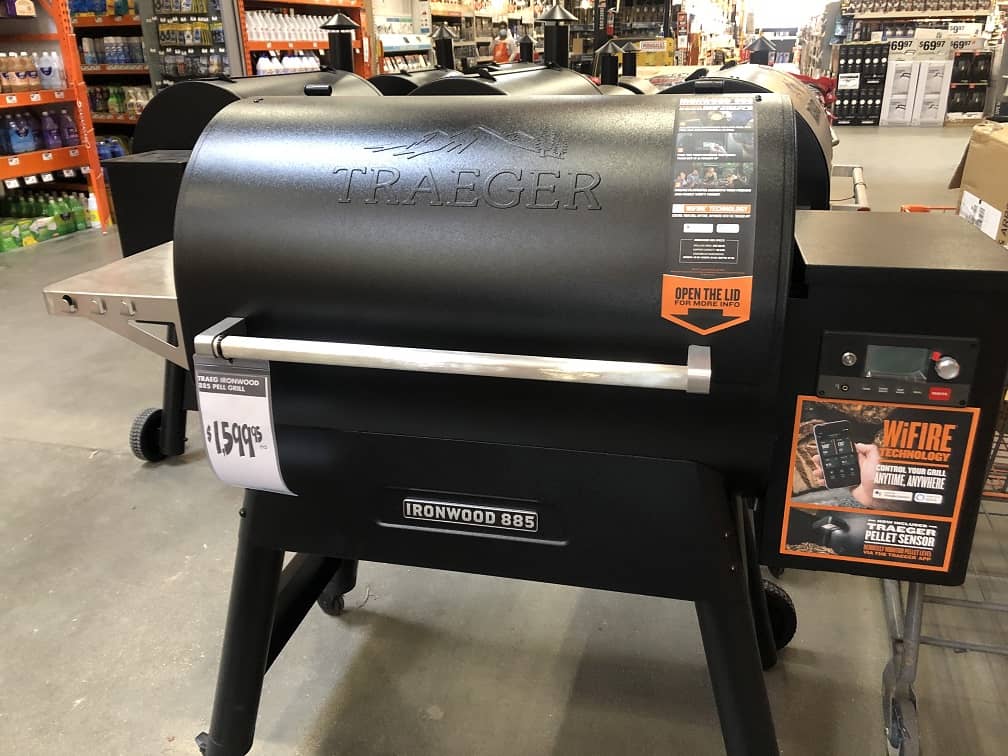 I did a quick check on the price of Traeger grills today and was shocked at how much more expensive they are than just a couple of years ago.  Here is a quick overview of current prices:

Seriously, Traeger thinks one of their grills is worth around $4,000!!!

By the time you buy a grill cover, a bag of pellets and include sales tax you will end up spending at least $1,000 on one of these grills.

What Makes Traeger Grills So Expensive

Here is a breakdown of the things that make Traegers more expensive than brands like Pit Boss and Z Grills.  We are going to be looking at the grills that Traeger is pushing the hardest and these are the Pro and Ironwood as well as the new Timberline grills.  These grills all feature the advanced D2 Drivetrain and WiFire controllers.

Traeger grills are powered by a newly developed “WiFire” controller coupled to a “D2 Drivetrain”.  The D2 Drivetrain consists of a single piece auger and variable speed fan that are connected to a brushless DC powered motor. 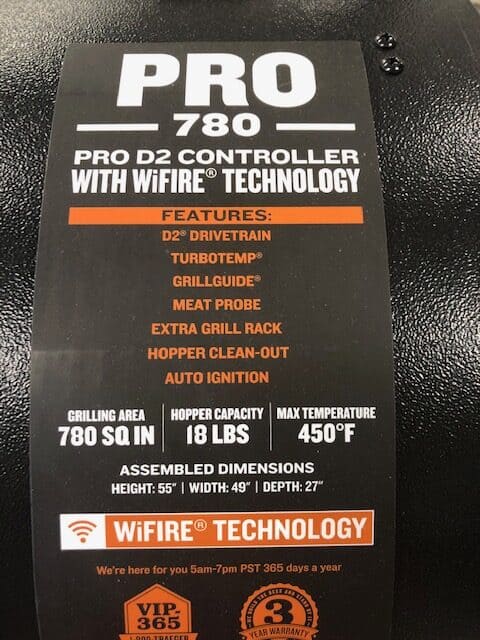 Powering a motor with DC power allows more precise control than is possible with AC powered motors.  The enhanced precision of the motor allows Traegers to maintain extremely precise temperature control.  It also enables a Turbo Temp feature that lets the grill heat up extremely quick and recover faster from temperature losses after the lid is opened.

The fact that the motor is brushless means that it is going to last an extremely long time.

The WiFire controller is a piece of advanced electronics that, among other things, allows you to control the grill through your smartphone. For me the real advantage of the WiFire controller is that it constantly measures the amps being used to power the auger.  If the auger gets a pellet jam the amp usage will go up and the controller will kick the auger into reverse for a few seconds to break the jam!

Again, this is not the type of technology you are going to get on a Pit Boss.

Innovative technologies like the new controller and motor are made possible by an active Research and Development staff.

The development team at Traeger has been issued 24 patents since 2015 for many different aspects of their grills including pellet hopper linings, leg designs, grill racks and mounts, cloud based app control and many others (here is the full list).

Having a staff of people dedicated to making patentable improvements to you products is not cheap and isn’t something you will find at an outfit like Z Grills.

Traeger has been racking up some legal bills recently and paying lawyers isn’t cheap.

A little grill history is in order here.

Traeger grills was founded by Joe Traeger in the 1980s and was run as a family business until being sold to venture capital in 2006 and a private equity firm a few years later.  Joe Traeger is no longer associated with Traeger grills.

In 2019 Pit Boss pulled a funny trick and hired Joe Traeger and his son, Brian Traeger.  Pit Boss sent out some press releases and got some good media exposure.  It helped Pit Boss gain credibility as a serious manufacturer of pellet grills to have Joe Traeger on board.

Traeger Grills did not think it was funny.  Part of the purchase price for the business was exclusive use of the Traeger name. Traeger ended up suing the owners of the Pit Boss brand, Dansons.

In October, 2019 it looked like Danson’s had won the lawsuit but the legal action continued through December, 2019 when Traeger says the case was settled in its favor.

As soon as that case was settled Traeger had to fight a lawsuit concerning the quality of their wood pellets.  The case was dismissed in May of 2020 but could be filed again under a different jurisdiction.

Marketing is a huge expense for Traeger.

Traeger’s marketing efforts are actually a strategic investment.  In a 2017 Forbes interview Trager’s CEO, Jeremy Andrus, detailed the company’s strategy: “Our ambition is not to own the wood pellet market. We already own it. Our ambition is to dominate outdoor grilling globally.”

In order to reach this goal Traeger has to educate the market about the ease of pellet grilling and why people should use a pellet grill instead of a gas grill.  In no uncertain terms, Traeger is going after Weber and that is an expensive proposition.

Another aspect of Traeger’s marketing plan is to build a base of massively loyal customers.  Traeger sponsors many celebrities on the traditional Social Media channels and runs events like “Kitchen Live” that are hard core, live streamed barbecue classes.  Heck, Traeger even employs four full time cooks to test recipes and do photo shoots.  These recipes get uploaded to the Traeger app so you can easily follow along if desired.

Traeger is investing heavily to create a hyper loyal fan base that identifies as #TraegerNation.

Are The Expenses Worth It?

While I love the concept of the new drivetrain and controller they are not something I value.  I am cooking on a Z Grill and an Oklahoma Joe’s pellet grill these days and while the temperature does fluctuate by 15 degrees or so it does not bother me.  For me, close enough is good enough.

If you are the type that is obsessed by precision temperature control then don’t worry as I have a couple of other options for you.

I am also not interested in paying for Traeger’s marketing budget.  Traeger has been successful in building a large TraegerNation and I respect their ambition in going after Weber to dominate the outdoor grilling space globally.  However, this isn’t what I want to spend my money on.

I am going to lay out two branches for you to follow.

The first branch is for the people who just want an affordable pellet grill that gets the job done.  They don’t want fancy bling, advanced technology or slick marketing.  They simply want a pellet grill that works.  You have some great options.

The second branch is for people who are willing to pay for hard core quality upgrades such as precise temperature control and excellent build materials.  You also have some great options.

If You Want A Cheap Pellet Grill

For years I cooked on a ZGrills 7000 series model and loved it.  I gave that grill to a friend and am now cooking on a 10000 series Z Grill. I am delighted with the new grill and my buddy loves the old grill.

Z Grills are clones of the original Traeger design but do not have the fancy electronics and motor of the new Traegers.   A Z Grill is great for someone who wants a highly functional grill and smoker who does not care about fancy branding.

Z Grill has a lot of different models in the $350-$600 price range and I give them a strong recommendation.

Here is the link to check out Z Grills Pellet Grills .  Pro Tip: Z Grills runs great deals from its website so it is almost always cheaper to buy one direct from them instead of Amazon.

When people think about inexpensive pellet grills they typically are thinking about grills from Pit Boss.  Pit Boss has valued priced grills at Walmart and some models that are heavier in features and price at Lowes.  Pit Boss also has a sister company, Country Smokers, that sells pellet grills through Tractor Supply Company.

Pit Boss grills sometimes have some issues with the paint peeling off but that is easily fixed with a can of high temperature grill paint.

Despite the price difference between Traeger and Pit Boss the grills have very similar user ratings.  Please see Traeger vs Pit Boss for more details. 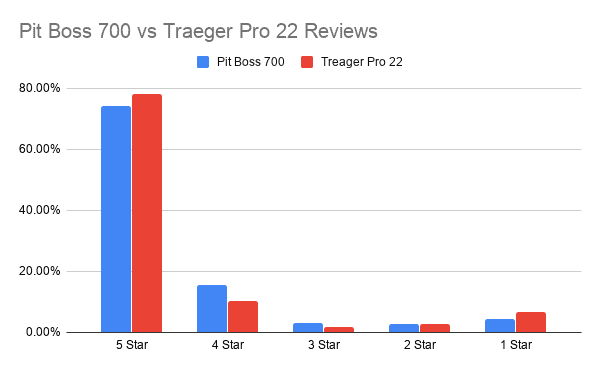 If You Want A High Quality Pellet Grill

If you want a seriously high quality grill with a lower price than a Traeger then you have some options.  The following grills have just as precise temperature control as a Traeger but achieve it with PID controllers instead of a DC motor.

Grilla Grills is located in Michigan and makes ultra high quality pellet grills.  Grilla Grills are more affordable than Traeger because they sell directly to consumers and do not have to factor in distributor markups.

Traeger sells their grills at wholesale prices to Big Box stores like Home Depot.  Home Depot then marks up the price so they can make a profit.  Traeger generally matches the Home Depot price on their website so they don’t undercut their retail partners.

Grilla Grills does not have any retail partners to upset so they can offer you great prices directly.

The Grilla Grills Silverbac Alpha is a beautiful, stainless steel freaking beast of a grill that received a Gold Medal Best Value Award from the grill gurus at AmazingRibs.  The Silverbac has a better warranty than Traeger (4 years vs 3 years) simply because it is a better grill.

The Silverbac Alpha does not have WiFi connectivity.

Here is the link to check out Grilla Grills.

Rec Tec is a company located in Georgia and they make spectacular pellet grills.  Rec Tec is like Grilla Grills in that they sell directly to consumers and do not have a distribution network to support.

I would purchase the RT-590 in a heartbeat instead of a Traeger.  If I had a little extra cash then I would seriously consider upgrading to the RT-700.

The Rec Tec grills do have WiFi connectivity.

Here is the link to check out Rec Tec Grills.

Let me point you to a sweet spot in the Camp Chef lineup.  Before you buy a Traeger take a look at Camp Chef SmokePro DLX 24.  You will get a stainless steel pellet grill with a PID controller and WiFi connectivity.  The DLX is smaller than a Traeger but if you want to talk about getting the most bang for your buck then it is hard to beat this beauty!

Here is the link to check out the Camp Chef SmokePro DLX 24.

The Only Traeger Grill That Is Worth The Money

The new Traeger grills really are nice and the only real issue that I have with them is the value proposition.

There is one Traeger that has all of the advanced technology featured in the new grills and comes with a price tag that I can support.  This grill is the Traeger Silverton 620 which is exclusive to Costco.

The Silverton 620 has almost as much cooking space as the Ironwood 650, has almost all of the same features and costs about 40% less.  If you really want to get a Traeger but don’t want to overpay then head down to your local Costco and take a look at the Silverton.

Here is the link to my full overview of the Traeger Silverton 620.