Pit Boss has come out with a new pellet smoker that is designed to look like an old time whiskey still.  While the design is cute I really can’t think of any reason why anyone should buy this product instead of a Pit Boss vertical cabinet smoker or their more traditional barrel style smokers. 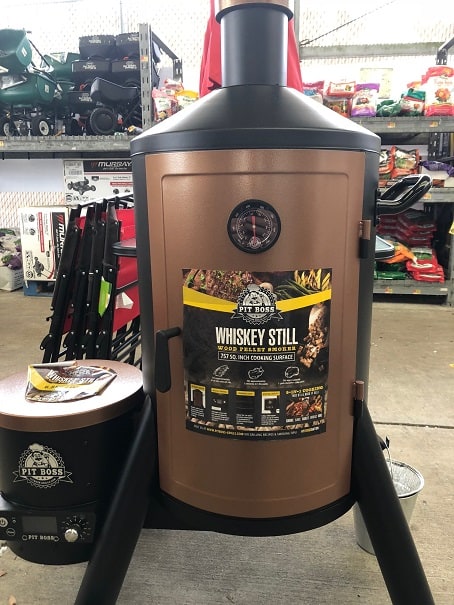 Let me walk you though the basic details of this smoker and then we can look at why it really isn’t a good choice.

This is a pretty basic smoker that, despite the novel outside design, doesn’t have many features. 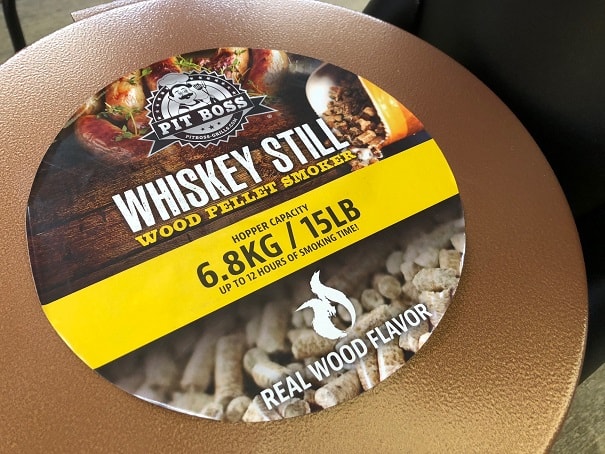 Why I Don’t Recommend the Grill

The major problem with this smoker is capacity.  The 18 inch grates just are not that large and most folks will only want to use two of them.  Here is a look at how much Pit Boss says you can fit in this smoker.

Pit Boss says that with the Whiskey Still you can smoke:

Here is how all of the grates and burn pot assembly look together. 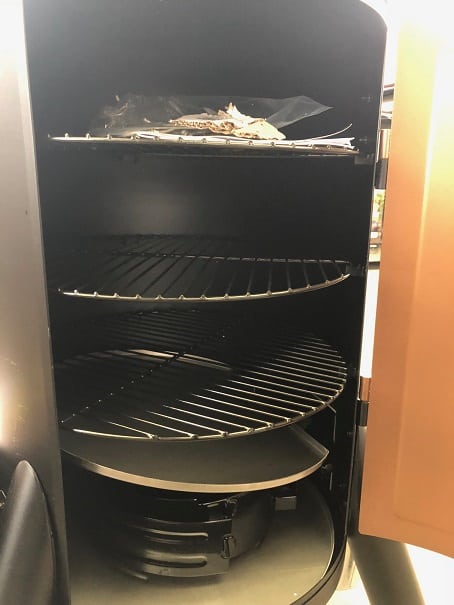 There is no way in heck that the bottom grate will be seeing the same temperature profile as the top and middle grates.  The best use for that bottom grate is to hold an over sized water pan to add moisture and help collect grease.  I suspect that folks will eventually end up only using the top two grates for cooking.

Other than capacity there are a couple of other features about this design that I don’t like.

Accessing the food from the side panel door will be awkward.  Let’s say that you have a big pile of country style ribs smoking away on the top grate and you want to brush them with a little sauce. You are going to have to open the side door and breath in a big pile of smoke while you try to reach the ribs on the back side of the grate.  There is no easy way to access any food that is on the back half of the grates.  This isn’t a deal breaker but it is annoying.

Another feature that is lacking on this smoker is a proper working side table.  You are going to want someplace to put your tongs, paper towels, etc and this smoker doesn’t have it.

Pit Boss makes plenty of full sized smokers that work great and have plenty of capacity.  If you want a Pit Boss Pellet smoker then buy one that is functional, not the one that is cute.

I got an email from a reader, Al W, who had some different opinions about this smoker and was gracious enough to allow me to post them here.  Here are a few thoughts from Al.

1) I think the vertical design of this smoker is a step in the right direction. As we all know, heat (and smoke) wants to travel straight up – not sideways. This is why we end up with convoluted designs like reverse-flow offset barrel smokers which try to obtain uniform horizontal distribution of something that wants to go vertical.

2) The close proximity of the bottom grate to the grease tray is in all likelihood a non-issue. Any direct effect the firepot might have on the lower rack would be by radiant heat. As there are two metal panel components between the firepot and the rack there would be very little if any radiant heat reaching the bottom grate. In addition, the forced convection aspect of all pellet burners further promotes uniform temperatures by circulating large amounts of air (relative to natural convection smokers) through the smoker at all times. I have a Traeger pellet grill which has a similar design (i.e., two metal panels between the firepot and the grate) and have never noticed any type of ‘hotspot’ directly above the firepot.

3) I have in the past used a Brinkmann Smoke ‘n Pit round vertical smoker which has a similar design relative to the door and racks. I agree that access to the rear portion of the racks is limited. Another problem I had with those racks was that if the food item was slid to the front of the rack (as during loading or unloading) the rack would sometimes tip as the portion of the rack in the door opening is unsupported.

4) As the owner of the aforementioned Traeger grill, I don’t think the term ‘a big pile of smoke’ is applicable to any pellet burner.

5) An issue I would have included in the review is that the controller is super low – maybe a foot off the ground? The controller on my Traeger is about twice that high and I feel even that is annoying and inconvenient. Actually, the whole smoker would be easier to use if those legs were a foot or two longer.

I’m not for or against the Whiskey Still Smoker, just wanted to put my two cents in.

Thanks for the input, Al!