Navigating the new lineup of Traeger grills can be confusing, especially when it comes down to sorting out which grills have what specialty features.  Some of the questions that I commonly seen being asked in the bbq forums and Facebook groups are about the Super Smoke mode.

More specifically, which of the new Traegers have Super Smoke, how to use it and why does it matter. 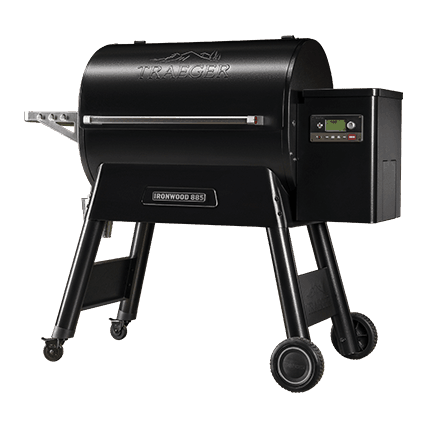 The Super Smoke mode was introduced when Traeger started making grills with its new WiFire Controller that was coupled with the D2 Drivetrain.  One of the confusing issues about the mode is that there are three grills that have the new controller and drivetrain that do NOT come with Super Smoke.

Super Smoke is not available on the following Traeger Grill models.

The absence of Super Smoke on the Pro 575, 780 and Silverton 620 is surprising since they have the exact same controller and drivetrain as the Ironwood and Timberline.

What Is Super Smoke and Why is it Important?

There is an interesting problem with pellet grills that is a bit of a no win situation.

People want to dial in a temperature and have the grill maintain that temperature as precisely as possible.  The problem is that when a pellet grill operates that precisely the pellets are burning very clean and do not produce much smoke.

To combat this problem most manufacturers of pellet grills include some variation of a “smoke” setting on the control panel.  Typically smoke settings run at low temperatures, under 200F, and will smolder pellets to produce billowing white smoke.

Generally you would use the smoke setting for the first hour or two of cooking to put down a layer of smoke flavor and then increase the temperature of the grill to finish the cook.

While the billowing white smoke of most smoke settings does increase the smoke flavor it is not the same flavor you get from the highly desirable “thin blue smoke” profile coveted by professional pitmasters.

The problem of clean burning pellets not producing smoke flavor is expected to be amplified in the new Traeger grills with the WiFire controller and D2 drivetrain.  The D2 drivetrain features a precisely controlled, DC powered, motor coupled with an advanced electronic controller that keeps the temperature locked to within +/- 5 degrees of setpoint.

Traeger built is the Super Smoke mode to offset the lack of smoke produced at higher cooking temperatures.  This mode can only be accessed when the grill is running between 165 to 225F.

Traeger says that you should not expect to see billowing white smoke while in SuperSmoke mode as they have figured out how to create more of the highly desirable thin blue smoke instead.

The Pro 575 and 780 are nice grills but the lack of any smoke setting is problematic. 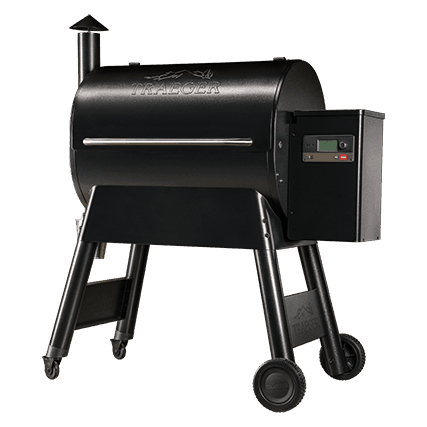 There are two ways that pellet grill manufacturers try to get more smoke into the meat.  The first is by including a Smoke setting which is lacking on the Pro Series. The second is by getting rid of the smoke stack.

When a grill has a traditional smoke stack the smoke rises up from the fire pot and goes out the top of the smoker.  The interaction between the meat and the smoke is limited.

Many manufacturers of pellet grills have eliminated the top mounted smoke stack and replaced it with a series of vents in the back of the grill that are near the cooking grate. This configuration forces the smoke to come down and across the meat before it exits the smoker.

The Traeger Ironwood, Timberline and Silverton grills all have the rear exhaust configuration while the Pro 575 and 780 still have a top mounted smoke stack.

The lack of a Smoke setting or Super Smoke mode combined with the use of a top mounted smoke stack suggests that the Pro 575 and 780 should produce the least smoke flavor of any Traeger grill.

Why Is Super Smoke Missing?

I initially thought that he Super Smoke mode was missing on the Pro Series because of the use of a smoke stack instead of the rear vent configuration.  Since Traeger says that the mode produces more thin blue smoke than white smoke I figured it had to do with airflow dynamics which you should expect to be different between a Pro and Ironside.

But then I saw the Silverton 620 at Costco and am starting to think that air flow has nothing to do with the inclusion of the new smoke mode.

Other than size there are no significant design differences between the 610 and 810 which leads me to believe that Traeger is intentionally leaving this feature off the less expensive grills to get you to buy one that costs over $1,000.

While I think Traeger makes nice grills I do not believe that they are worth over $1,000.  Keeping a key feature off of lower priced grills to force you into their upper price range does not leave a good taste in my mouth…kind of like eating ribs with no smoke flavor.

Before you lay out more cash than you need to on a Traeger I seriously suggest that you check out a Z Grills,  Grilla Grills Silverbac or a Rec Tec.  These Trager alternatives are awesome grills at much lower price points.