If you’ve ever bought a packer cut brisket, you may have found yourself regretful just throwing away all those succulent bits you had to remove from the flat’s fat cap and wishing there was an alternative. If you’ve ever wondered what to do with brisket trimmings, wonder no longer.

There is a wide variety of uses for beef trimmings, so next time you prepare a brisket, set them aside for another recipe or a fun project instead of letting them go to waste. 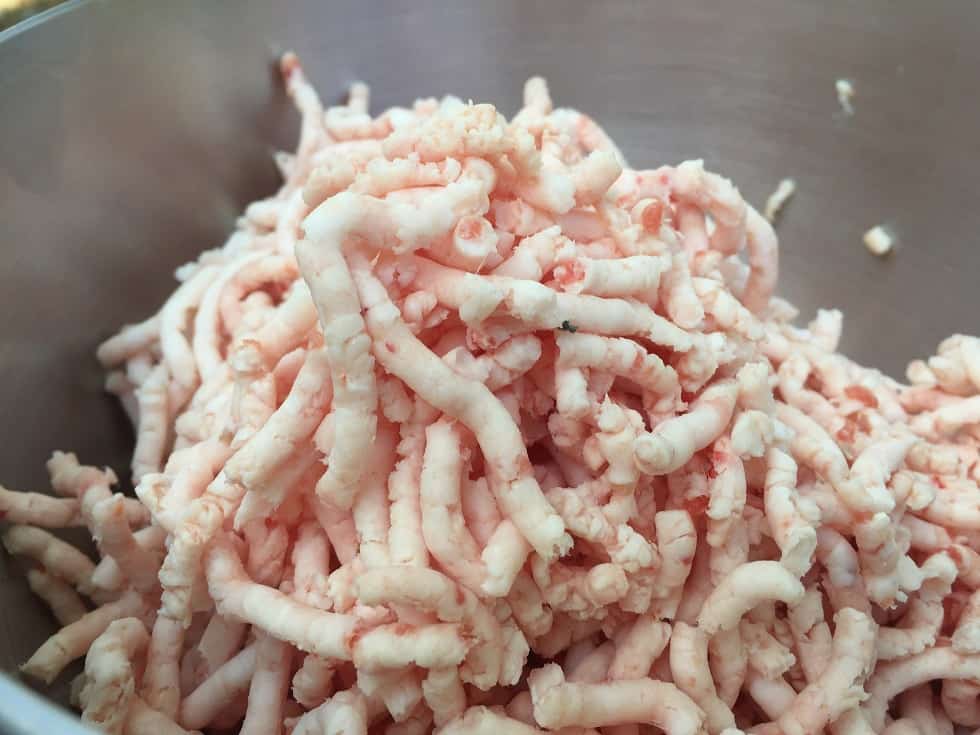 Before you toss that brisket fat into the trash here are a couple of ways to use it in some more meats to stick on your smoker. Briskets are expensive, even at Costco, so you need to use all of it that you can.

The thick cap of fat from a brisket makes the perfect addition to leaner meats to add richness and flavor. Grinding will be easier if you freeze your food processor blade, meat, and fat for about twenty minutes beforehand.

When you’re grinding meat or fat, don’t leave the food processor running; just use the pulse setting as few times as possible or the ground meat will turn to mush.

If your burgers have been a little dry, some brisket fat could keep the leaner meat moist and juicy. The perfect proportion of fat to meat is up to you, but around 20% fat is right.

If you add much more than that, you can render the fat in the pan, ending up with soggy buns. On the other hand, less than 10% fat will result in a patty that’s more like shoe leather than a hamburger. The more well-done you like your burger, the higher fat content it needs to make sure that the meat doesn’t dry out. Use a kitchen scale to ensure you get the ratio you want.

Brisket fat adds out of this world flavor and richness to homemade sausage. Simply blend a little brisket fat with pork shoulder using the same technique you would if you were using it for burgers.

Keep in mind that pork is fattier than lean ground beef so you don’t need to add as much of the brisket fat. An ounce or two of fat to each pound of pork should do it.

Blend in a mixture of cayenne pepper, brown sugar, sage, salt, and black pepper. Just remember not to taste the raw sausage. If you want to test the level of seasoning, fry up a miniature patty to taste.

Rendered beef tallow adds incredible flavor, not to mention a hefty dose of B vitamins and important minerals, to regular home-cooked foods like hash browns. It requires slowly rendering the fat down into liquid form, but it’s quite a simple process.

There are two basic techniques to render fat. Dry rendering is easy to do in a slow cooker and works best if you have a larger amount of fat that is completely separated from any muscle fibers. Just set the slow cooker on low and let the fat render until you are left with only the liquidized fat.

If you don’t have a slow cooker or there is a lot of meat still attached to your fat trimmings, you can use the wet render method.

To wet render brisket fat, put the minced or ground fat in a large stockpot with just a little less water than would be required to cover the fat. Heat until it’s steaming but not boiling, and let it cook until any bits of meat are browned, the fat is rendered, and the liquid is a yellowish color. If there are any stray bits of meat in your tallow, strain them out.

With either method, you can run the cooled, but still liquid tallow through a cheesecloth and even a coffee filter before allowing it to cool overnight. The next day, simply lift out the thick layer of fat, rinse it, and store it for later use.

You can use tallow just as you would any cooking oil like shortening, vegetable oil, coconut oil, olive oil, or even melted butter.

Tallow is excellent for sautéing or roasting vegetables and its flavor matches especially well with potato dishes. If you have enough tallow, you can even deep fry French fries or fried chicken in it.

Tallow adds earthy beefiness when incorporated into baked goods like biscuits or pie crust for savory pies. In fact, some baked goods are traditionally made with tallow as their primary fat.

Yorkshire pudding is a traditional English side dish made of a simple batter baked in tallow. This light and fluffy delight has long been served alongside roast beef at Sunday dinners.

Old fashioned Southern cornbread couldn’t get any more classic than when baked into sticks and fried in tallow or you can simply replace the fat in your favorite cornbread recipe with an equal amount of tallow.

Of course, if you don’t want to add all of that fat back into your diet there are several non-food uses for brisket fat for you to consider!

Tallow has gotten an unjustified bad reputation based on the harshness of old-fashioned lye soap. Today, we have better control over ingredients and don’t have to rely on homemade lye, so we can enjoy the moisturizing benefits of tallow for the skin. Soap made from tallow also has an advantage over soap made from most vegetable oils in that it gets nice and hard and doesn’t melt away quickly. It also has a wonderfully rich, foamy lather that other soaps cannot imitate.

Always weigh ingredients precisely and use a lye calculator. At its heart, tallow soap is simple, consisting of distilled water, lye, and tallow. You can experiment with adding essential oils and even blending the finished product with washing soda to make your own laundry soap!

Making candles from tallow couldn’t be simpler. Melt the tallow in a double boiler or a clean can in a pot half-full of water, prop cotton wicks so they are centered in a jar, and pour the cooled, but not hardened, tallow around the wick. Let it solidify, and you’re all set with homemade, toxin-free emergency candles!

Can You Freeze Beef Fat?

If you need to wait a while after trimming your brisket before using the fat, you can just freeze it. If you have already rendered the fat, it can be helpful to freeze the tallow in muffin tins or ice cube trays so that you have easy-to-use quantities readily available. The fat should keep well for up to a year in the freezer.