It is amazing that pork is so incredibly popular and confusing at the same time.  I have been compiling a list of the most frequently asked questions about pork and one of the big ones is, “What is the Difference Between Bacon and Pork Belly?”

Let’s take a closer look and get that question answered for you!

The single biggest difference is that pork belly is always a “fresh” meat while bacon is always a “cured” meat.  You can use a salt and nitrite cure to turn a fresh pork belly into traditional American bacon.  However, bacon can be made from many different cuts of meat other than pork belly. 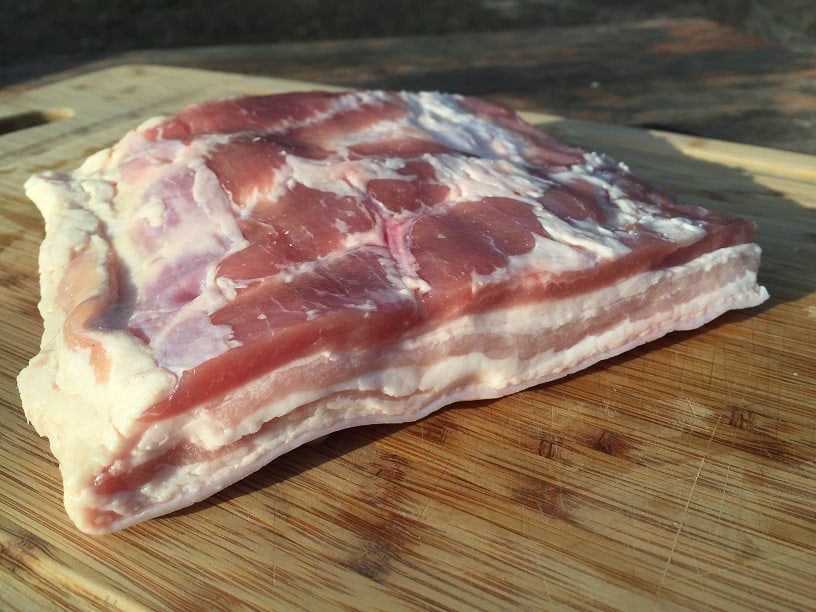 Pork Belly Must be Cured to Become Bacon

Pork belly is a fresh cut of meat that is taken from the belly of the hog and is typically fatty with streaks of lean meat.

In order for a pork belly to become bacon the belly needs to be treated with salt, sugar and sodium nitrite.  This treatment is known as a “curing step”.  Originally people cured pork bellies as way of preserving the meat before the advent of refrigeration.

The salt helped minimize the amount of available water content in the meat which minimized bacterial growth.  The nitrite was essential to eliminate the deadly and persistent bacteria that caused botulism.  The sugar is not required for the cure step but it did help absorb water and minimized the harsh flavor of the salt.

The curing process created a distinct flavor, color and texture in the processed pork belly that we fell in love with and know as bacon.

Other Types of Bacon

Another twist in the relationship between pork belly and bacon is that you can make bacon from other parts of the pig other than the belly.

Remember, making bacon was a way of preserving the belly.  There were other cuts on the pig that also needed to be preserved and were cured in the exact same manner as the belly.

Other popular cuts of pork that are used to make bacon are the loin, for Canadian Bacon, the shoulder, for Buckboard Bacon, and the cheeks for Jowl Bacon.  For what it is worth, I think Jowl bacon is the most amazing bacon ever created.

How is Uncured Bacon Different From Pork Belly?

There are voices saying that eating cured meats is unhealthy.  While I am not going to go into that debate, I will say that the belief that nitrites are harmful has led to some highly questionable, and borderline unethical, marketing practices from some bacon producers.

Since the primary difference between a a pork belly and bacon is that the belly is “Fresh” and the bacon is “Cured” then it would seem like “Uncured Bacon” and “Pork Belly” would be the same thing.

Producers are using the term “Uncured Bacon” to mean bacon that has not been treated with nitrites.

However “Uncured Bacon” is almost always treated with celery juice/powder/extract which just so happens to be LOADED with nitrites.  The nitrites from celery cure the bacon just like the nitrites from traditionally cured bacon.

Because the nitrites in celery is “naturally occurring” producers get to make the claim that there are no added nitrites and therefore the bacon is “Uncured”.

Please see “What Does Uncured Mean?” for more details.

What has always confused me about these two meat products is the relative availability.

You can go into almost every single grocery store in America and find bacon.  Heck, there are usually 4-6 different brands fighting over the limited shelf space.

But go into those same stores and try to find a slab of pork belly and you will walk away empty handed.  The amount of stores that carry fresh pork belly are extremely limited.  See “Where to Buy Pork Belly” for more information.

What’s more, when you do find fresh pork belly for sale it is almost always more expensive on a per pound basis than the sliced bacon which has undergone more processing.

Why does curing, slicing and packaging a belly make it less expensive than a non-processed belly?

There is something about pork economics that I clearly do not understand!

Ready for More Pork Knowledge?  Check out this article on What is the Difference Between Pork Chops and Pork Steaks!