Salami is one of the most delicious and appealing cured meats. It’s a delightful anytime treat and is terrific as a picnic staple or a midnight snack.

However, while salami is incredibly popular, most of us don’t know what’s in it, what it’s made of, and the difference between the varieties. 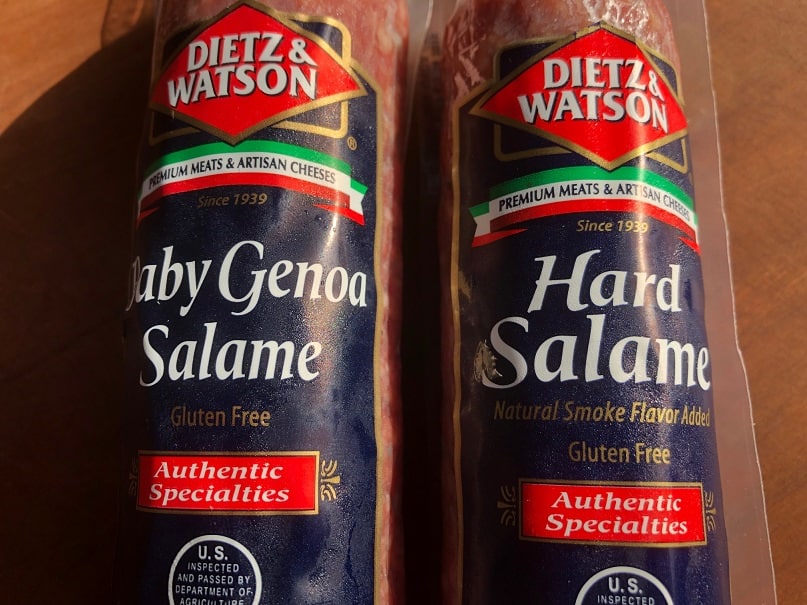 Salami is seasoned, cured meat that is fermented, air-dried, and stuffed into a casing. Salami is never cooked, but the curing process makes it safe to eat.

Pork is the most common meat to make salami with. However, other meats can be used. First, the raw meat is coarsely ground and mixed with the desired spice blend. Next, makers add yeast to stabilize the salami’s color and control its pH levels.

The fermentation process ensures that the meat is acidic and it’s hard for harmful bacteria to grow. Fermentation usually lasts between 48 and 96 hours.

Salami is cured for several months until the meat has lost 25 to 50 percent of its original weight. The curing chamber is usually around 50 degrees Fahrenheit and has about 50 percent humidity. In addition to the curing process, hard salami is usually smoked.

What is Salami Made Of?

Most salami is made with pork. However, different regions around the world use different meat in salami. Some use a mixture of pork and beef. Kosher salami uses beef. In France’s Provence region, residents use donkey meat. In Northern Italy, traditional salami is made with goose meat. Venison and turkey are also used to make salami.

The Different Types of Salami

There are many different types of salami. Different places in the world have their own methods and specific spice blends. Some salami is flavored with red wine, and some are smoked for added flavor. Certain Italian regions use leftover parts to create salami.

Genoa salami is tangy and sharp and has a flavorful spice blend. Genoa is often a lighter shade of red than hard salami.

Soppressata can be cured on uncured dry salami. Soppressata is known as a heritage salami, and each Italian region has a different method of creating its salami. Residents often slaughter the pig themselves and use all of its parts to create the salami.

Soppressata Toscana is often made from parts of the pig that are typically leftover, including the pig’s head. First, the head is boiled for several hours. Then, the meat and skin are chopped, seasoned, and stuffed into a casing that is typically larger than other salami varieties.

Different seasoning is used depending on the region. The cooking liquid is poured into the casing, and the liquid binds everything together.

Soppressata is typically pressed while it is drying. This lends it an unusual oblong shape rather than the round shape of most salamis.

Each region has its own Soppressata specialty. The Calabria region’s salami is protected with a Protected Designation of Origin stamp.

The USDA only accepts chemicals as curing agents. So, while salami that has been cured using salt is cured, it is labeled as uncured salami.

Salami labeled uncured has been cured using salt, juice, beetroot powder, and celery powder. This uncured salami is safe and ready to eat without cooking.

What is the white stuff on salami?

The white powdery exterior is mold. This penicillin mold is perfectly safe to eat and is similar to the outside of Camembert or Brie. The mold grows during the fermentation process. The white mold is usually only present on artisanal salami.

Some like to eat the moldy casing. However, there is no shame in removing the casing and eating just the salami.

Is the Salami Casing Edible?

Most salami casing is edible. However, you shouldn’t eat synthetic or plastic casing. It is edible if the casing is natural. Here is more information on what sausage casings are made of.

If you want to remove a natural casing before eating the salami, you can cut it off. First, cut off a small piece of salami on either end. Next, start at the cut-off end and make a shallow cut down the salami. You just want to slice the casing and not the actual salami. Finally, you can peel back the casing and remove it before eating your salami meat.