Pork can be a flavorful piece of meat, which is one of the reasons why it is one of the most widely consumed proteins around the world. With so many cuts available, it’s important to know what each has to offer. The pork cushion meat is highly versatile, allowing you to take advantage of this white meat. So, the question becomes: what is pork cushion meat good for?

What is Pork Cushion Meat?

Pork cushion meat refers to a boneless piece of pork that comes off of the picnic shoulder. More specifically, the cut is from the anterior side of the shoulder. Due to its location, it is comprised of a lot of muscle, which also means it is lean.

Once the cushion is removed from the bone, it is commonly triangular-shaped. Depending on the size of the pig as well as how the butcher makes the cut, the cushion will average two to three pounds. 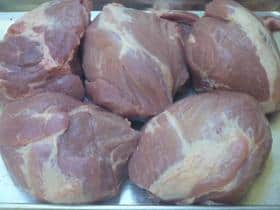 In some instances, there’s also a lot of connective tissue as well as intramuscular fat. This is highly desirable when making certain pork dishes, including pulled pork.

The pork cushion meat is commonly mistaken for the pork butt. While they are both part of the foreleg of the pig, they are derived from different parts. The cushion is located lower on the leg. The butt is located directly above it. The butt isn’t as muscular, so it has more fat that can lend to flavor. Since both are still in the same area, the cooking methods are very similar.

What is Pork Cushion Good For?

Pork cushion can be utilized in a number of different ways. Due to the connective tissue that is present, you’ll want to marinate, tenderize, and/or cook it slowly so that you don’t experience any chewiness.

This type of pork roast can be kept whole. You can also choose to slice into the cushion to create cutlets. If you choose to work with cutlets, you can marinate them or pound them out so that they can be breaded and fried. Just don’t try to put the whole roast into the pan to fry as it will result in a chewy texture.

Some of the most common ways to utilize pork cushion meat include:

The meat is easy to work with, so you can braise, stew, roast, or smoke it. As long as you take your time with the meat and set it on low heat over an extended period of time, you can enjoy tender pork.

Pork cushion can also be utilized in homemade pork sausage. Once it goes through the meat grinder, the various tissues and fats will be broken up, allowing you to create a great texture for sausage.

How to Smoke Pork Cushion

Smoking pork cushion meat is one of the most popular ways to work with this cut. The low and slow method develops the flavors and tenderizes the meat.

It’s important for the pork to reach room temperature before you begin the smoking process. Placing it on the counter for about an hour works well.

Heat the smoker to 225 degrees.

Be sure to season the pork cushion roast using a flavor profile that you will enjoy. You might want to try a dry rub, which will often consist of paprika, brown sugar, salt, black pepper, and dry mustard. You can also choose to marinate the roast overnight in a mix of apple cider vinegar and various herbs and seasonings.

Once the smoker has reached 225 degrees, place the pork inside. Plan on smoking the meat for about 2 hours for every pound. This means that your roast will likely be smoking for between five and six hours.

Before you cut into the pork cushion, allow it to rest for about 30 minutes.

The pork should be tender enough that you will be able to pull it apart with a fork. 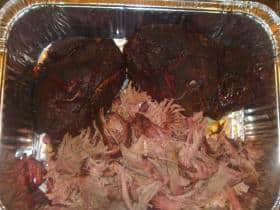 It’s easy to get overwhelmed by the various cuts of pork that are on the market. In total, there are around 18 cuts.

The pork cushion is comprised of the picnic shoulder. However, pork shoulder is a slightly different cut. The main difference has to do with the fat content. Depending on what you want to cook, one cut is going to be better than the other.

The pork shoulder is taken slightly above the cushion, so it is a bit fattier. It is commonly known as pork butt or even the Boston butt. The cost of the shoulder is a bit higher in price. The cushion isn’t as popular, but you can get it from any butcher. Knowing about the cushion can save you some money. When you’re looking to smoke a piece of pork while being more economical, you can choose a pork cushion and save a few dollars per pound.