Many people are searching for better, healthier foods to eat and this is reflected in the surge of products labelled as “Organic”, “All Natural”, “Hormone Free”, “Antibiotic Free” and “Uncured”.

Many of these labels are misleading and “Uncured” in one of the worst offenders.  Let’s take a close look at what “Uncured” really means so you can decide if uncured meats are a heathier alternative to traditionally processed meats and whether or not you should consider the products safe to eat. 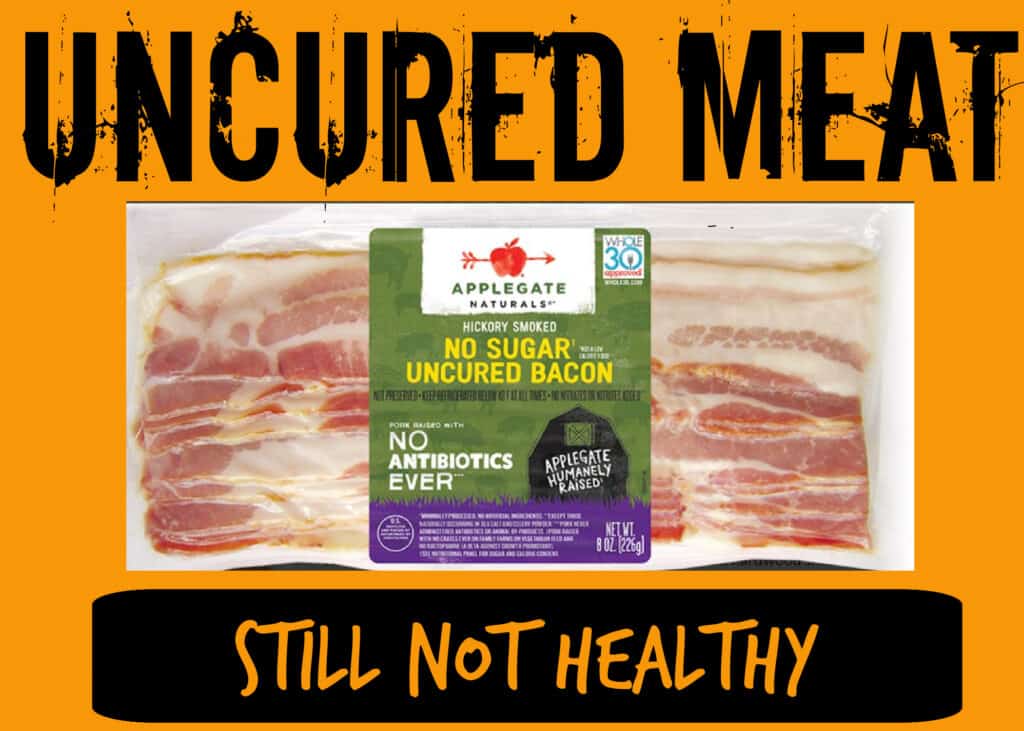 What Does Uncured Mean?

“Uncured” refers to a meat product that is not processed with the traditional chemical additives of sodium nitrite and/or sodium nitrate. The “Uncured” label implies that the meat product is free from added nitrites and nitrates but, in almost all cases, this is incorrect as most “Uncured” meat products have equivalent nitrite/nitrate content as their traditionally “cured” counterparts.  The only difference between the two products is the SOURCE of the additives.

Why Meat Products Are Treated with Nitrites and Nitrates

To really understand what is going on with these misleading labels we need to talk about what it means to cure meats and the role played by nitrites and nitrates.

Curing is a form of meat preservation that involves treating the meat with large amounts of salt and small amounts of sodium nitrite and sodium nitrate.  Nitrite is a fast acting chemical that is excellent at killing hazardous bacteria that would spoil the meat.  The nitrate slowly converts to nitrite over the course of weeks to provide a time delayed bacterial protection barrier.

While the primary role of nitrite is to provide protection against harmful bacteria it also changes the color, texture, aroma and flavor of the meat.  Cured meats, like Summer Sausage for example, have a distinctive flavor that many people have come to love.

There have been numerous studies that indicate that eating processed meats like bacon, pepperoni and hot dogs increases your risk of contracting colorectal cancer.

The World Health Organization’s International Agency for Research on Cancer (IARC) has classified processed meats as a Group 1 carcinogen. This places processed meats in the same cancer causing category as cigarettes.

The exact mechanism that makes these products carcinogenic is not well understood but it is suspected that either the harm comes from the nitrites themselves or from heterocyclic amines that are created when the processed meats are heated during cooking.

While processed meats are in the same Group 1 categorization as cigarettes this does not make the two products equally dangerous.  Being named a Group 1 carcinogen reflects the strength of the evidence that something is a carcinogen, not the inherent danger.  For example, the American Institute for Cancer Research points out that eating high amounts of processed meats doubles a person’s chances of developing cancer while smoking cigarettes increases the risk by 20 times.

How Uncured Meat Products Use Nitrites/Nitrates

Given the health risks associated with eating processed meats it is natural for people to want products that do not contain nitrites and nitrates.

The problem is that food producers are using loopholes in the United States Department of Agriculture labeling requirements to market meats as “Uncured” but that still contain large amounts of nitrites and nitrates.  The specific details of this situation are outlined in depth in this excellent research paper published by Sebranek and Bacus in the journal Meat Science.

In a nutshell, the loophole is that you can call a meat product “Uncured” if you do not add any artificial ingredients.  However, there are many natural ingredients such as celery and spinach powders that have massive levels of naturally occurring nitrates. Take a look at the label any “Uncured Bacon” product and it will say something like:

Celery powder has a nitrate content of approximately 2.75 wt% and can be combined with bacterial starters that rapidly break the nitrate down into nitrite.

The marketing of “Uncured” meats is so misleading that in 2019 the Center for Science in the Public Interest and Consumer Reports joined forces and petitioned the USDA.  The title of the request is, “Petition to Require Accurate and Non-Misleading Labeling on Meat Processed with Non-Synthetic Nitrates and Nitrites.”

Is Uncured Meat Safe to Eat? Is it Healthier or Better?

I will make the speculation that “uncured meat” might be slightly more dangerous than traditionally cured meats due to the lack of regulation.  The USDA has tight specifications for exactly how much artificially added nitrite and nitrate are permitted in different food products but no regulations on how much is permitted from natural sources.

Given the lack of USDA specifications on using naturally occurring nitrates from celery powder as a curing agent, and the fact that the nitrate from celery powder gets slowly converted to nitrite, it is impossible for a consumer to know what concentration of nitrites and nitrates are in their “Uncured Meat”.

The terms “Cured” and “Uncured” only concern meats that are traditionally treated with nitrites and/or nitrites for preservation or flavoring.  These are products like pepperoni, bacon, country hams, hot dogs, etc.

Fresh meats like ground pork breakfast sausage or raw chicken breasts do not get treated with nitrites.  Technically fresh meats are “Uncured” but it does not make sense to refer to them as such because they are not traditionally cured in the first place.