In 2020 Weber-Stephens brought its first two wood pellet grills to market after much hype and fanfare on Youtube. Weber appears to have been strategic in their market entry as their two grills, the Smokefire EX4 and EX6, are designed to go head to head with the pellet grills produced by Traeger. 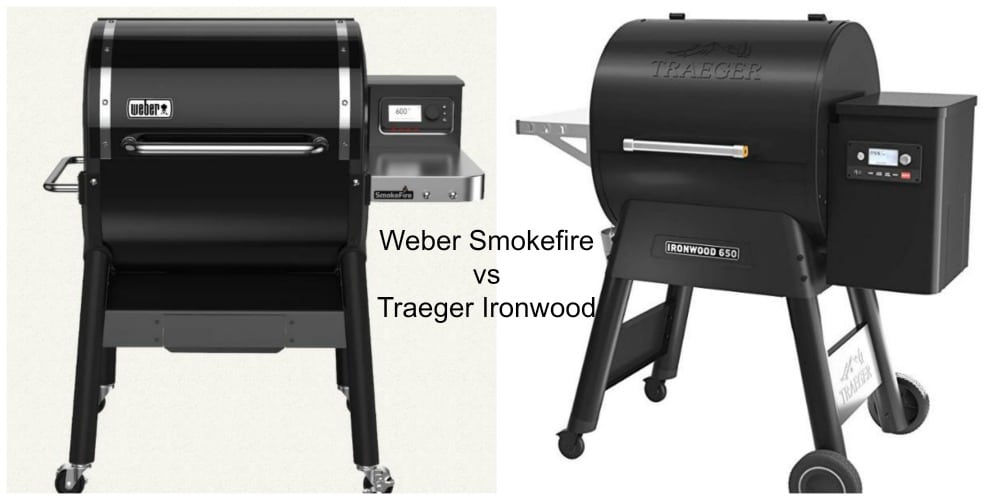 As some background, in 2017 the relatively new CEO of Traeger stated that the plan for Traeger was not to dominate the pellet grill industry but was to dominate outdoor grilling globally.

For that goal to be successful Traeger was going to have to up its game and come up with grills that could compete with Weber.  The result is that Traeger came up with three new product lines (Pro, Ironwood and Timberline) that were actually pretty dang good and are viable alternatives for traditional gas grills.

Here is a look at how the Weber Smokefire grills stack up against Traeger’s Pro, Ironwood and Timberline grills.

I compiled the buyer reviews posted on the following websites: Traeger, Weber, Amazon, Ace Hardware, Home Depot and Lowes on June 11, 2020.  I specifically compared the Weber EX grills against the Traeger Ironwood counterparts since those are the grills that are most similar in price points, size and features. 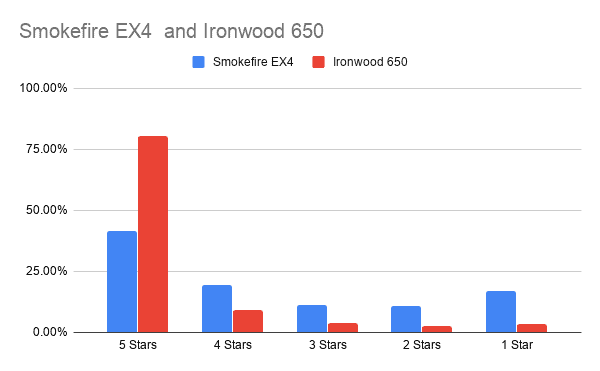 The situation is even worse for the EX6. 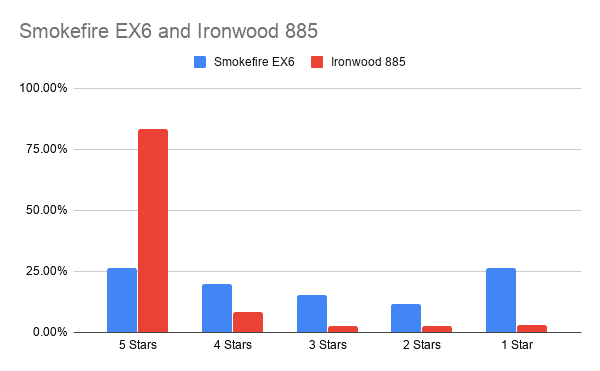 The reasons for the high level of dissatisfaction for the Weber pellet grills are diverse.  Issues run from uneven heating, damage upon delivery, grease fires, pellets not feeding into the auger and non-functional control paneles.

The following is a breakdown of the significant design difference between these grills.

The Smokefire is a little bigger, a lot hotter and 20% less expensive than the Ironwood.  You get the same trend on the larger Smokefire EX6 vs the Ironwood 885.

Let’s take a closer look at the issue of cooking area.  The Weber grill has 3.5% more grilling space than the Traeger and, for all practical purposes, that difference is insignificant.  I highlight the grilling area because it defined Weber’s strategy for the Smokefire series: Make a grill that is better than Traeger in every single detail.

The Differences That Matter

So if the grate size isn’t that big of a deal then what, other than price, really makes the Weber grill different?

The biggest complaint about pellet grills in general is that they struggle to generate sufficient heat to be great grills.  Pellet grills are amazing at “Low and Slow” but are just okay for high heat grilling.

For years the highest stated temperature that Traeger said you could get with one of its grills was 450F.  With the Timberline and Ironwood series the top temperature rose to 500F.  If you throw a set of infrared emitting GrillGrate panels into an Ironwood at max heat you will be able to put a decent sear on a steak but the GrillGrate panels are not standard and will set you back another $70 bucks or so.

The Weber Smokefire comes in with a maximum temperature of 600F which is plenty hot enough to put a great crust on a steak.  With the improved top temperature it looks like the Smokefire is one of the few pellet grills that actually performs as a high heat grilling machine.  If you want a pellet grill that has serious searing power then look at the Oklahoma Joe’s Rider DLX that can sear at temperatures of 700F! 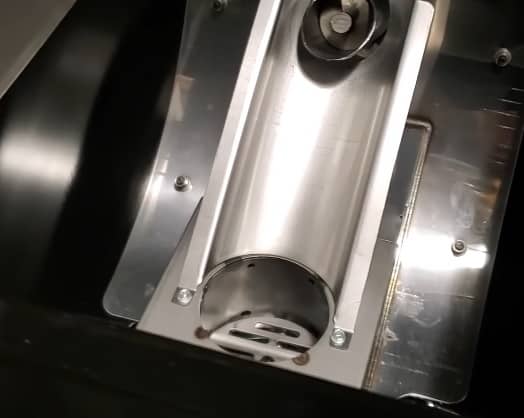 The Weber design is intended to prevent a rare but serious condition that happens with pellet grills.  Sometimes the burning pellets in the firepot will ignite the pellets that are still in the auger.  Once a fire starts in the auger it can burn backwards and reach the entire pile of pellets that are stored in the hopper.  This burnback scenario does not happen very often but is scary as heck when it does.  The elevated distance between the auger and the fire pot should eliminate the possibility of burnbacks.

Additionally, the Weber auger is designed to sense any pellet jams and will work its way backwards and forwards to fix the problem.

Traeger, and almost all other pellet grills, manage grease by collecting it on a large heat deflector/grease tray located between the cooking grate and the fire pot.  The grease tray is sloped and the collected grease drains away to a grease bucket of some type.   Overall this type of grease management system works pretty well.

The Weber grease management system is completely different and is based upon how grease is handled in the Genesis gas grills.  On the Smokefire the grease drips into the firebox, is partially vaporized by stainless steel Flavorizer bars and then falls into a grease trap at the base of the grill.

In other words, a Traeger collects grease ABOVE the flames while a Weber collects grease BELOW the flames.  The driver behind this change was to reduce the probability of a grease fire.  Grease fires are not very common in pellet grills but can happen when people get lazy and don’t clean their grills as often as they should.

The use of Flavorizer bars on the Smokefire does not appear to be a good idea.  Two of the larger problems reported by users is that the Smokefire suffers from grease fires and the cooking surface has a very uneven temperature distribution.  Specifically the grill gets much hotter on the right than on the left.

Here is a video that shows the heat distribution problem.

Here is a video that shows the grease fire problem.

Management of sawdust is an issue unique to pellet grills.  As wood pellets burn in the fire pot a fan blows air to help the fire burn and distribute heat through the grill.  The fan also blows on any wood dust that comes out of the auger and sends it all over the base of the grill.  Over time there will be a large accumulation of sawdust in the base of the grill that must be cleaned out as it is a real fire hazard.

Weber addressed this problem by designing a new fire pot.  The fire pot on the Smokefire has slots in the bottom that allow any dust that comes out of the auger to fall through and collect in the grease tray.  This results in significantly less dust being blown through the grill which should make the Smokefire safer to operate. 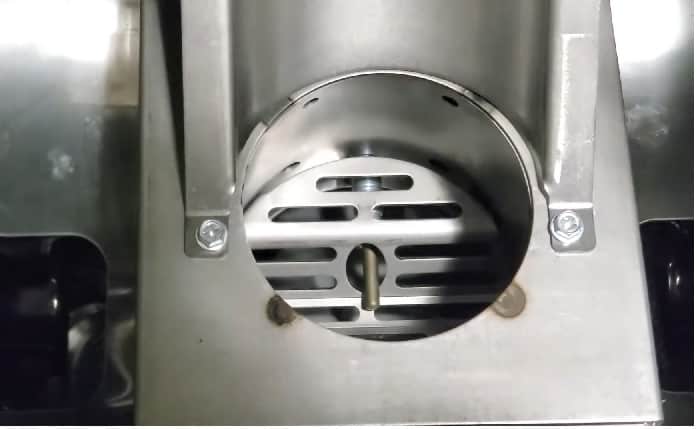 The Traeger system for grease management and sawdust management work fine if you take the time to clean the grill on a regular basis.  Weber recognized that most people hate cleaning their grills and do not do it often enough.  In response, Weber engineered a system that does not require cleaning as often.

The Ironwood hopper holds 20 pounds of pellets and the Smokefire hold 22 pounds.  This component is not critical but I like to point it out as another example of Weber’s attention to detail.

There is a sensor in the Smokefire hopper that lets you know when the grill is low on pellets and only has about two pounds left.  While wood pellets can come in any size bag, one of the most common sizes is 20 pounds.  This means that when the low pellet alarm goes off there is enough room for a full bag of pellets.  You can dump the pellets into the hopper and throw away the bag.

When the hopper gets low on the Ironwood you only have room for most of the bag of pellets and will need to store the remaining few pounds somewhere out of the way.

While Weber had some nice ideas about the pellet hopper they messed up one important detail, the slope.  The hopper did not have enough slope so pellets were not sliding into the auger.  Weber has been sending out new inserts that fix this problem but it is amazing that they messed up on this critical detail in the first place.

The Weber grill has a PID controller while the Ironwood has Traeger’s D2 control system.  The Traeger D2 controller is pretty solid and I do not know if the PID on the Weber is a meaningful improvement.  However, there are a lot of folks who swear by the PID as the gold standard so I figured it was worth mentioning.

Both grills come with Wi-Fi connectivity and have associated apps.  One of the biggest complaints about both brands is the difficulty of connecting the grills to Wi-Fi and the usability of the apps.  That being said, Weber’s app is newer and appears to have more bugs.

Weber had some great ideas when they designed the Smokefire grills but have stubbed their toes when they ventured into this new market.  I have no doubt that the next generation of Weber pellet grills will be vastly improved but for now the clear winner between these two brands is Traeger.

Right now the only reason the buy the Weber instead of the Traeger is price which is pretty funny considering how expensive Weber grills typically are!

What do you think?  Which grill would you buy??

Want to advertise, work together or give me a hard time?  You can reach me at Da[email protected]