Weber currently offers three models of electric grills in the US and these are the Q 1400, Q 2400 and the Pulse 2000.  All three of these models are excellent electric grills that will work great on your apartment or condo patio.

There are some notable differences between these three options so let’s take a look and see which one is right for you.  FYI….finding unbiased information on the Internet is tough and I want to provide you the best information possible.  I would like for you to know: 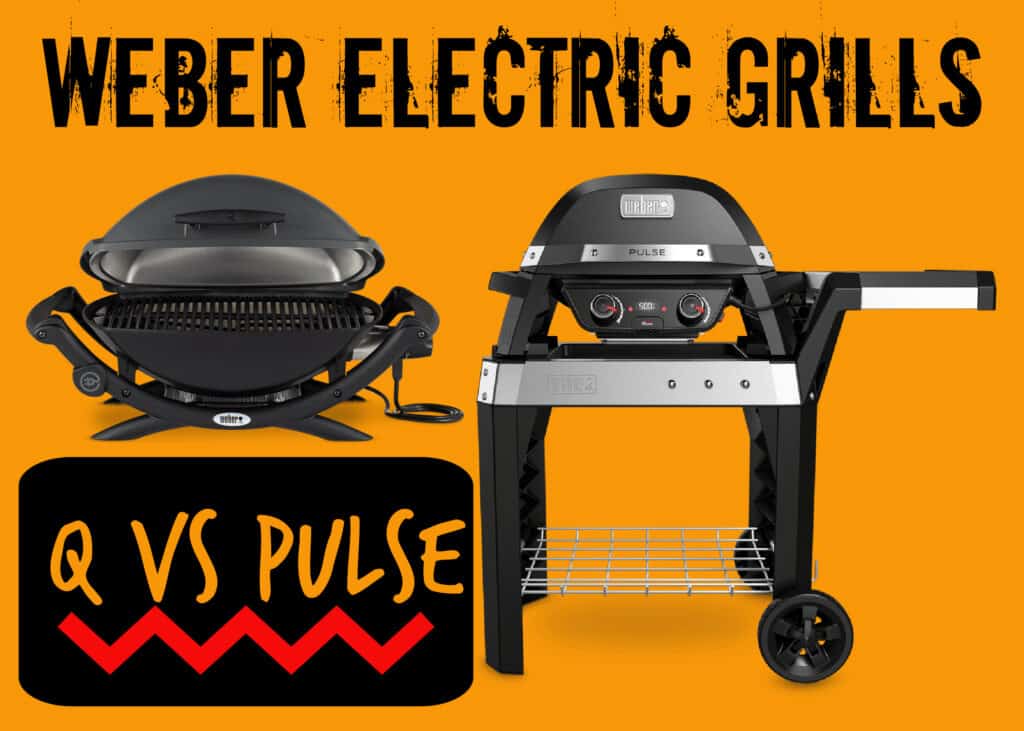 Here are the base specifications for the two grills.

The warranty for both grills covers the cook box, lid assembly, and other plastic components for five years while the heating element and associated control system is covered for two years.

I pulled all of the customer reviews from Amazon and Home Depot for these grills and ended up with 2,795 ratings split almost equally between the two models.  This data is current as of December, 2020 and the graph below shows what the reviews looked like. 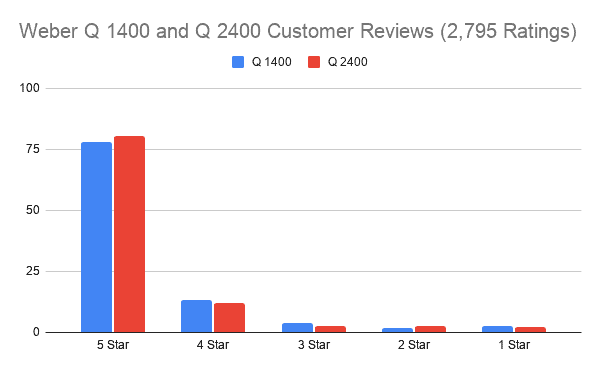 The results are even better than the data indicates as about a third of the 1 Star reviews on the Home Depot site were actually extremely positive.  Here is a look at a couple of examples.

Almost all owners love these grills and were impressed by the performance.  Both grills are able to reach temperatures of over 500F, are easy to clean and have high quality construction.  The biggest complaints about the grills is that neither one has a lid thermometer or side tables. 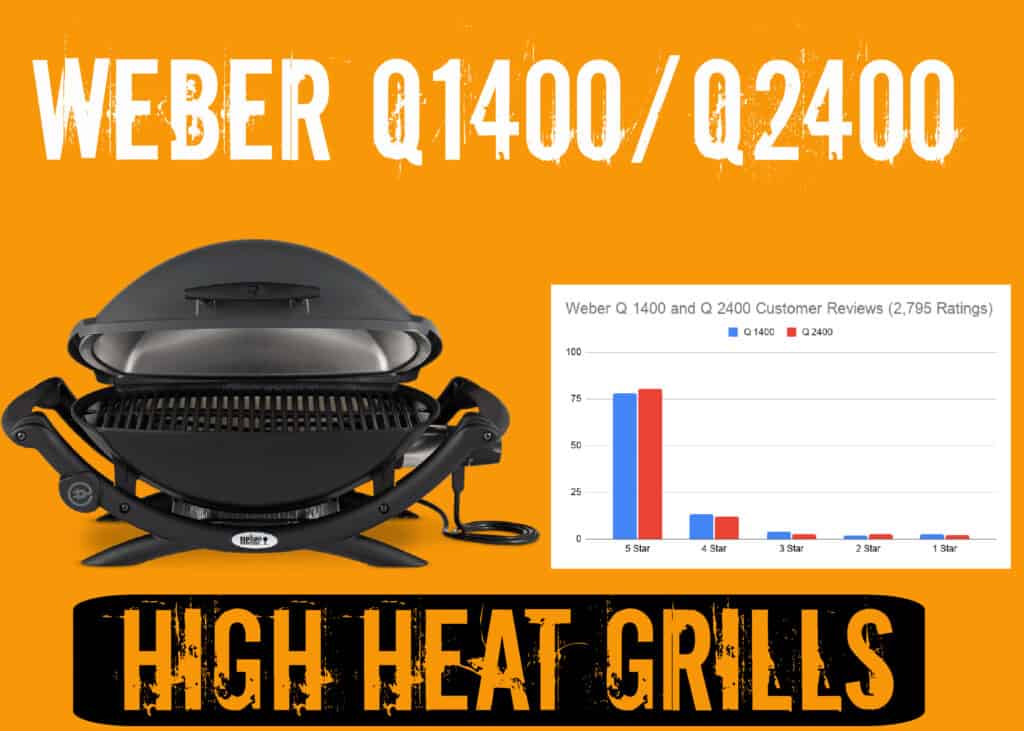 Which One is Better?

This is going to sound counter-intuitive but the smaller Q1400 is the better grill.

While you might be tempted to go with the Q2400 because of the larger cooking area you first need to understand how these grills work.  These grills cook food through the radiant heat from the electric heating element and conductive heat that is transferred from the heavy cast iron cooking grate to the food.  The conductive heat transfer from the cooking grate is extremely important.  In order to get the heavy cast iron grates hot enough to be effective you need to preheat these grills before you add your steak or burgers.

Here is the trick.

You might not think that an extra 10 minutes of preheating is that important but it significantly impacts the life of the heating element.  A heating element is only good for so many operational hours before it fails.  You will get fewer cooks from the element on the Q2400 compared to the Q1400 simply due to all of the extra time the element will need to preheat the heavy duty cast iron grates.

For the mathematically inclined:

I am going to toss out a generalization here that might not apply to you but take a moment to consider.

Most people who are looking at these grills are living in an apartment or condominium where open flames on the deck or patio are forbidden.  These folks are usually only cooking for 1-4 people and don’t really even need the extra space you get on the Q2400.  Here is a look at the capacity of the Q1400 so you can see if it will be large enough for your needs. (Image Credit and Source) 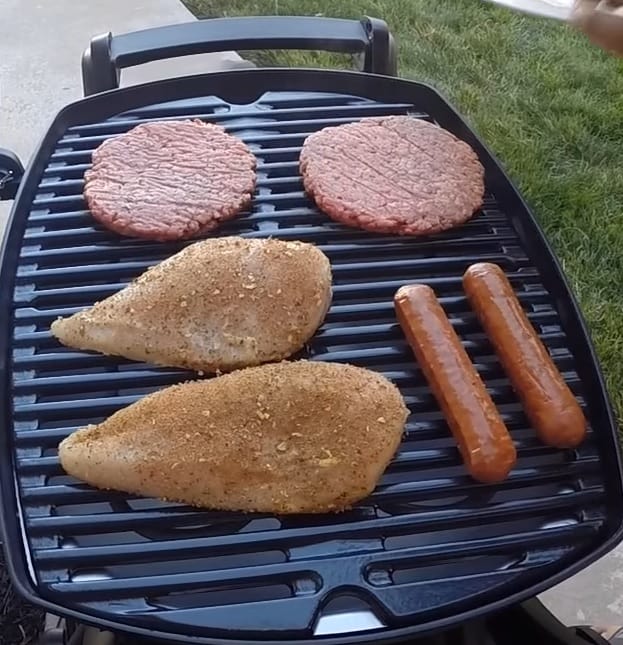 The Pulse 2000 is beautiful, versatile, has every feature that you could ever want and is ridiculously expensive. 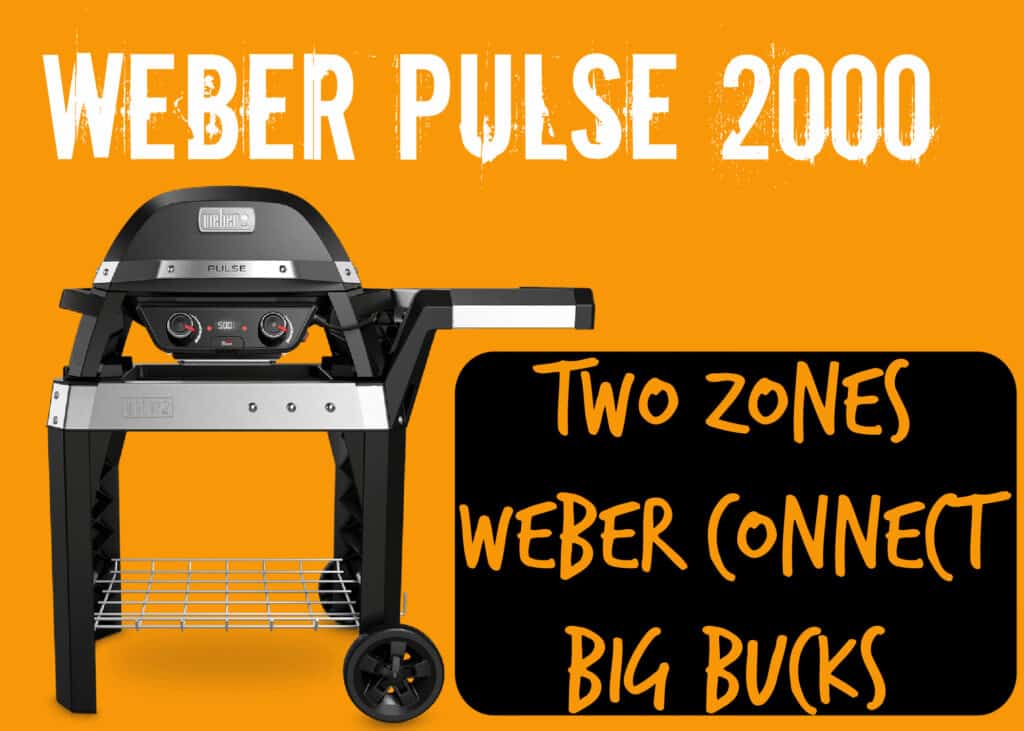 There are some obvious massive differences between the Q and Pulse grills.

While all three grills have the same power output at 1560 watts, on the Pulse the power is split between two independently controlled heating elements.  The Pulse has Right and Left side control knobs that allow you to set up two different temperature zones inside the grill.  You can sear a burger with high heat on the right side of the grill while toasting the buns with low heat on the left side of the grill.

The Pulse also has a digital thermometer that lets you know the temperature inside the grill but note that this will be an average temperature as it cannot switch between the left and right side if you are running a two zone heating profile.

The Pulse comes with two meat probes and has the capacity to accept up to four.  Please note though, that in order to use the meat probes you need to use the Weber Connect Smart Grilling application onto your phone.

I have no doubt that the Pulse 2000 is a wonderful grill but I just can’t get past the price tag.

If the two zone temperature control of the Pulse gets you excited then just go ahead and buy two of the Q1400s with carts, etc. and it will still cost less than the Pulse.

At $899 the Pulse is in the same price range as a Weber Spirit or Genesis and I have a hard time saying that it is worth the money.