I love cooking ribs and I love rotisserie grilling so I figured it made sense to combine the two and start cooking ribs on a rotisserie!  Let me show you two ways that you can have more fun with your grill by taking some ribs for a spin!

Here are how you can cook a single slab of ribs on your rotisserie as well as how to cook up to four slabs if you want to invest in a little extra equipment.  I have a High Heat technique for ribs with a crisp, crunchy exterior and a chewy center and a Low and Slow method for fall off the bone tender ribs.

A Single Slab of Ribs on a Rotisserie

This is a High Heat technique that I like for a couple of reasons.  The high heat cooks the ribs in about 90 minutes which is great for a weeknight meal.  This technique also produces a rib with a much different texture and flavor than your standard “3-2-1 foil wrapped” ribs.

You set this up by weaving the rotisserie rod between the rib bones, about every three ribs, and securing the ribs with the rotisserie forks.  You are going to want to season your ribs with more of a savory than sweet profile as the high heat will burn the sugars in a sweet rub.  A simple rub of salt, pepper, paprika and garlic would be perfect here.  If you need some rub ideas then check out my post on Baby Back Rib Dry Rub Recipes. 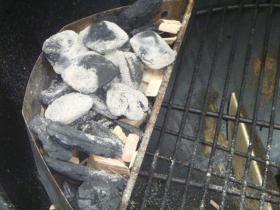 All of the vents were wide open and the kettle running about 400F at the dome.  I added the rotisserie ring and let the ribs spin for about 75 minutes.  The aroma of roasting ribs was incredible!  The ribs got sauced with Sweet Baby Ray and spun for another 15 minutes while the sauce set.  The charcoal had burned down and the kettle was running cooler at this point so I wasn’t too worried about the sauce getting scorched. 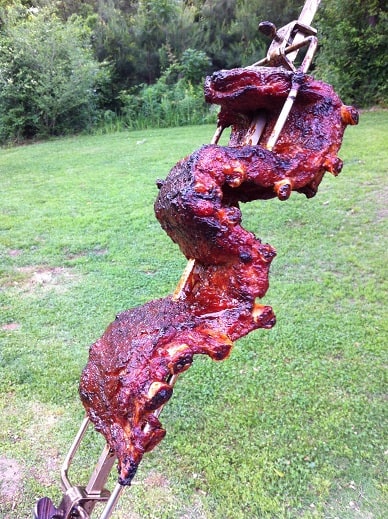 The ribs were not bite through tender like you get when using Myron Mixon’s Rib Recipe but did have a great crispy crust.  It was a nice change of pace for cooking ribs and it was nice that they were ready after only 90 minutes.  The downside to this approach to rotisserie ribs is that you can only cook a single slab at a time.

If you wanted to use this technique to create more tender ribs then you would only use a single charcoal basket which would lower the temperature inside the grill.  The cook would probably take about four hours and you would need to refill the charcoal basket every hour or so.

Up to Four Racks of Ribs on a Rotisserie 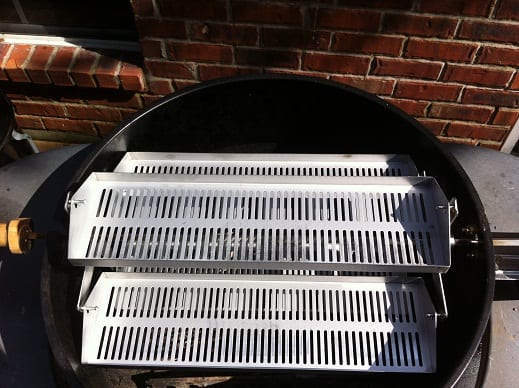 For this cook I only loaded two slabs of St Louis ribs onto the Ribolator but, since it has four trays, you can easily cook four racks of ribs at a time. 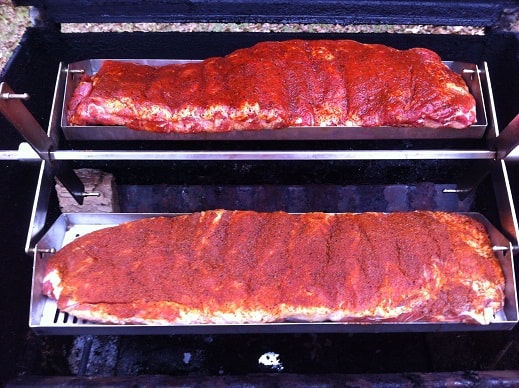 I did these ribs on an old Weber Genesis.  I had the back burner set to High and the front and middle burners were off. This burner configuration had the grill running at an average temperature of about 275F.  I could have dropped the temperature to 250F by turning the back burner to Medium instead of High.  Again, you can also use the Rib-O-Later on a 22 inch Weber kettle.  If you want to go “Low and Slow” then only use one charcoal basket.

When you are working with the Rib-O-Later it is tricky to take the ribs off, wrap them in foil and get them back onto the tray.  It is not impossible but the balance of the trays gets thrown off.  Instead of messing around with foil I started spritzing the ribs with apple juice after two hours.  At four hours the meat had pulled back from the bone and a toothpick was sliding easily through the meat.  These boys were done!  If you are working with the more tender Baby Back ribs then I would drop the temperature and cook them for a bit longer (See How Long to Smoke baby Back Ribs at 225F for more details.)

Think you can’t make great ribs using a rotisserie on a gas grill?  I disagree 🙂 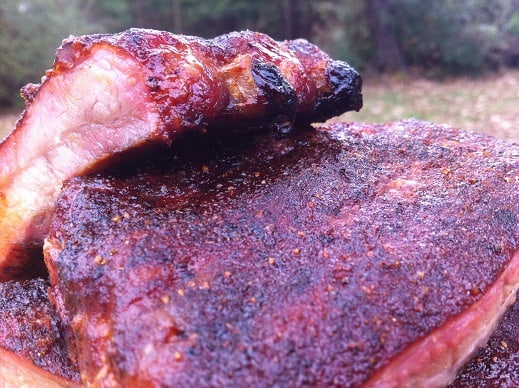 If you have a gas grill and love ribs then give some serious thought to grabbing yourself a Ribolator.  Next time I need to cook ribs for a crowd this is going to absolutely be the technique I use.

Here is a nice video showing the Rib-O-Later in action!