Two awesome steaks that come from the sirloin primal are the picanha and tri tip.  There is a lot of confusion about these steaks with some people even thinking that they are the same cut of beef.

Let’s take a look at the similarities and differences between the picanha and tri tip to so you can up your steak game! 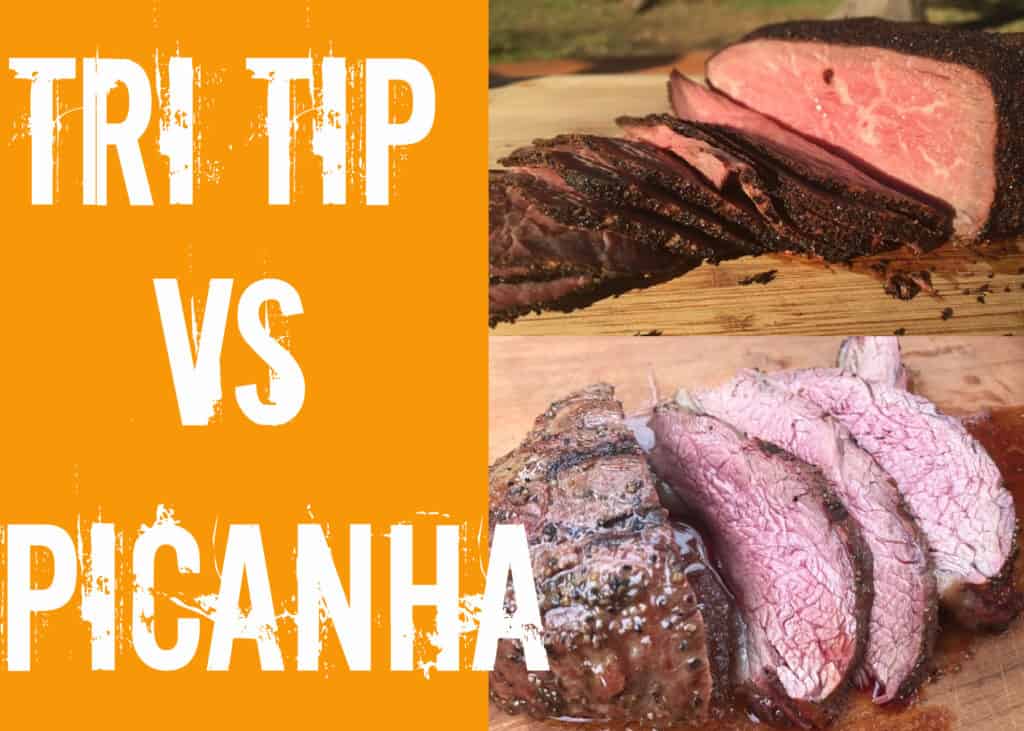 What The Picanha and Tri Tip Have in Common

Both of these cuts come from the Sirloin primal which makes them working muscles that have a lot of flavor.  On the flip side, because they are working muscles they are not as tender as the ribeye, flat iron, teres major or tenderloin. From a flavor and tenderness standpoint there is very little difference between the two cuts.

Tri tips and picanhas are relatively inexpensive when compared against the prices for ribeye and tenderloin but are often very difficult to find at the grocery store.  If you are trying to find either of these cuts then these links will help you out

What is Different About Tri Tip and Picanha

Despite these steaks having so much in common there are still plenty of differences. Many of the differences are cultural and related to how people name, cook and serve these steaks.

Picanha comes from the Top Sirloin subprimal and is covered by a large fat cap (See the article, What is Picanha? for more information).

This cut has several different names with many of them based upon the location and description of the steak.  One alternate name for this steak is “Top Sirloin Cap” which makes perfect sense.  Another name for the steal is “Coulotte” which has a French origin related to the word “cap”.

The name “picanha” is the Brazilian name for the steak and, according to Wikipedia, is related to a pole that ranchers use to help move cattle. 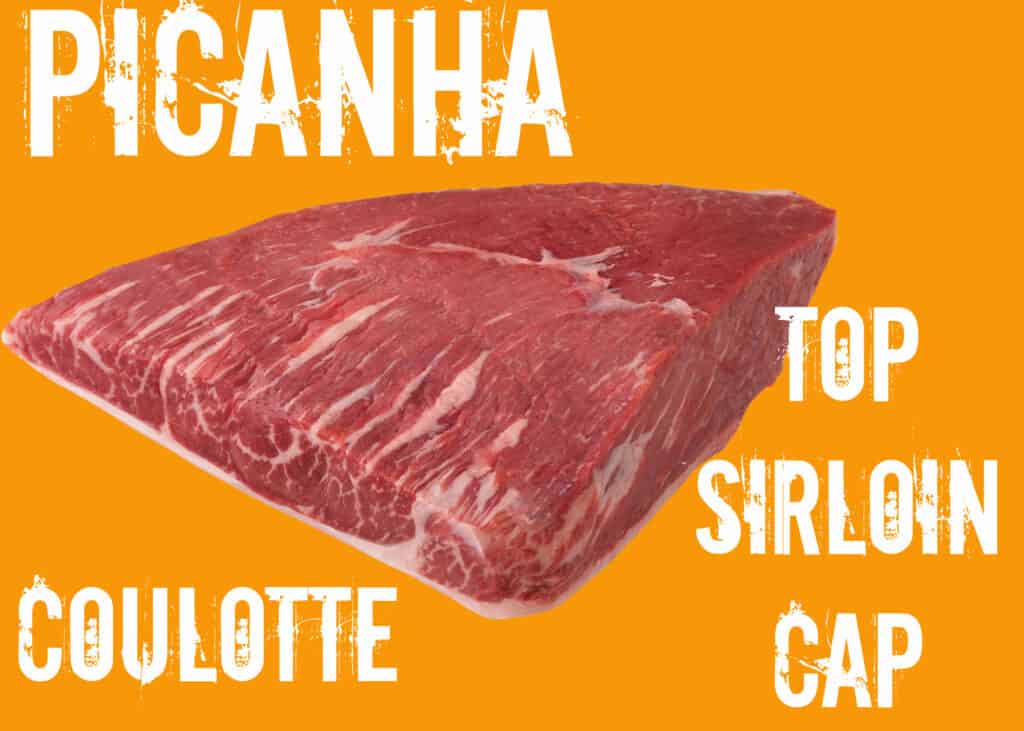 The picanha has a slightly triangular shape which is one reason it is often confused with a tri tip.

The picanha has a significant fat cap but many American butchers will remove it.  When I am lucky enough to find one of these I will trim off some of the fat cap but will leave most of it intact. 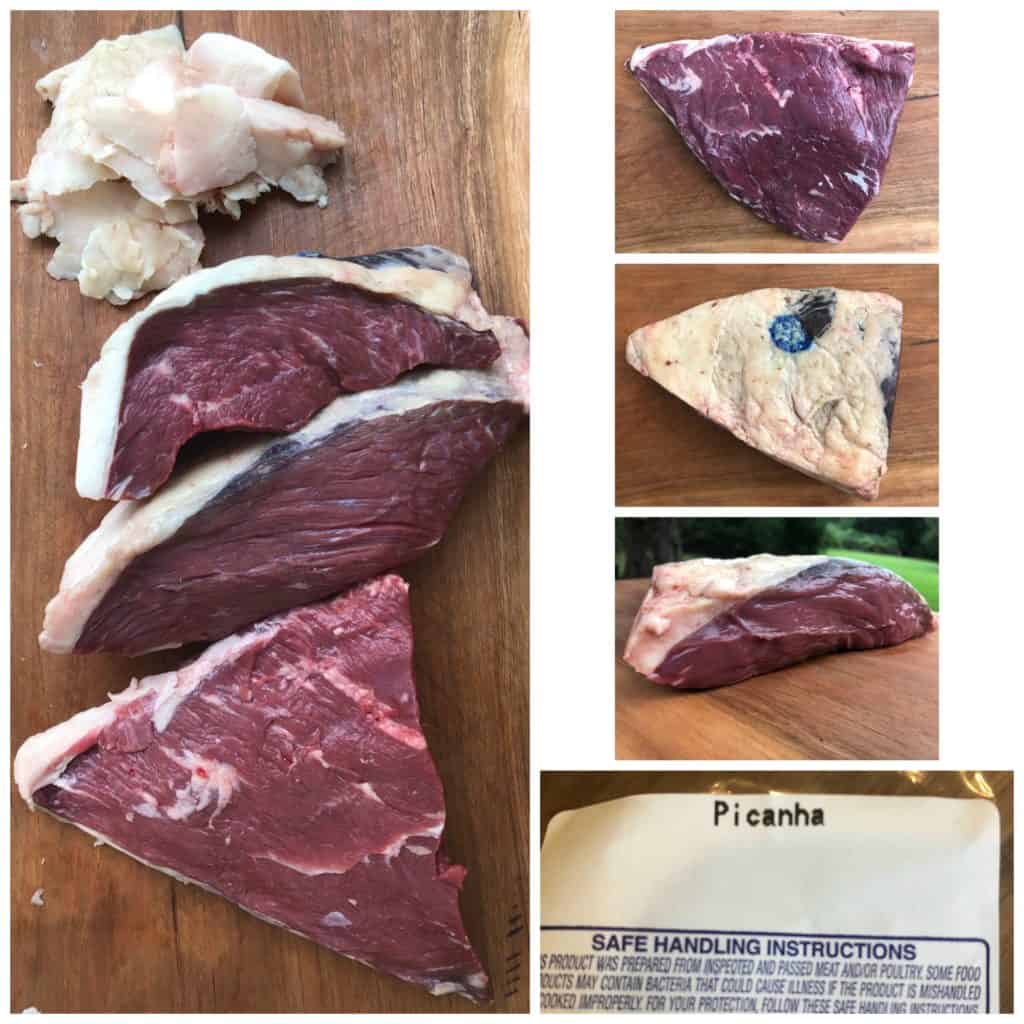 The picanha is extremely easy to separate from the Top Sirloin.  Here is a quick look at a typical American preparation.  The butcher is referring to the cut as the “coulotte” and “sirloin cap” which is probably more appropriate as he completely removes the fat cap.  I can’t imagine that any Brazilian meat cutter would ever take the fat cap off.

These steaks are what you see being served on skewers at Brazilian steak houses.

What is Tri Tip 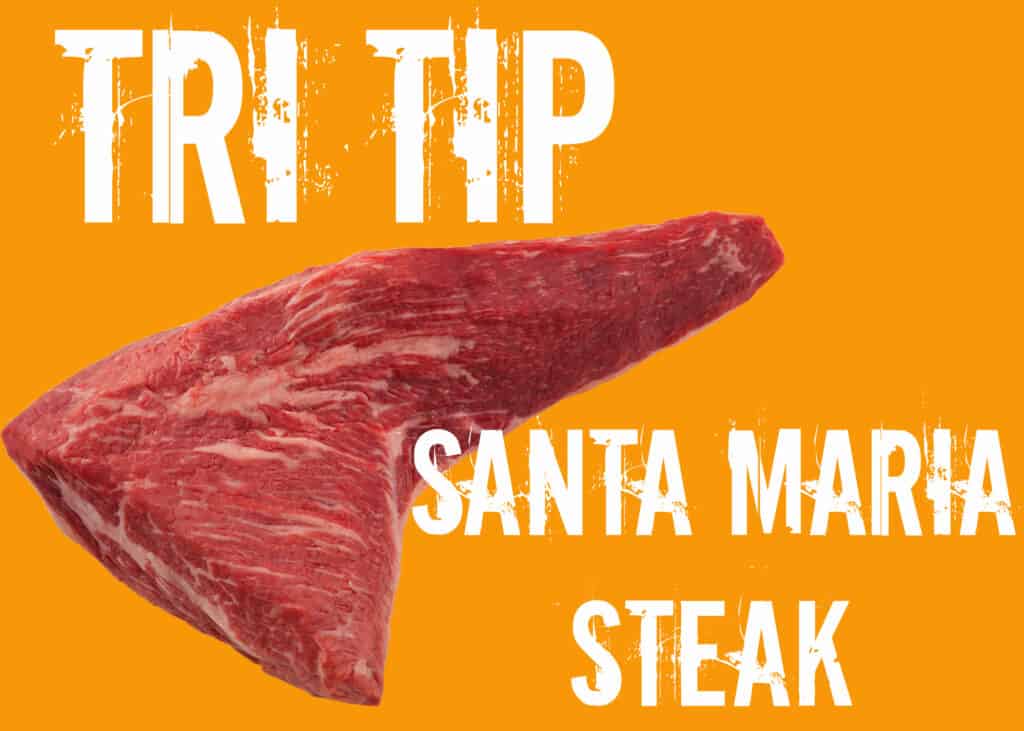 The secondary name for this cut, Santa Maria steak, comes from the story that this cut was popularized in Santa Maria, California in the 1950s by a man named Bob Schutz.

It turns out that the tri tip is difficult to harvest from a steer and many butchers would end up grinding the cut for hamburger meat. Bob realized that the cut was actually an incredible steak and could be bought pretty cheaply.  Bob started selling tri tip at his store, the Santa Maria Market where it quickly became a local favorite.

Here is a great video discussing the “origins” of the tri tip that also shows the effort required to remove this cut from a hindquarter.

Tri Tip is Better than Picanha

My favorite between these two cuts is the tri tip. This is the same conclusion I came to when comparing Tri Tip vs Brisket.

I like to smoke tri tip for about an hour and then sear it off over high heat for a perfect medium rare.  I like the large slices I can get from a tri tip and enjoy how the roast looks.  Here are a couple of posts showing how I approach tri tip.

Here is a video I shot cooking a tri tip to show off the versatility of the Spider Grills pellet adapter.

Of course everyone has different opinions on which cut is better and why.  To that end I want to share two videos from some of my favorite YouTube channels, Sous Vide Everything and Pitmaster X.

Here is the head to head challenge from Pitmaster X.

Here is the challenge from Sous Vide Everything.

The big take away from these challenges is that while these cuts have many things in common that they are absolutely not the same cuts of beef.  Which one is actually better is pretty much a toss up and will come down to your personal preference and whether or not you can even find them in your local stores.

But both are seriously great eats!