Both summer sausage and salami will scratch your cured meat itch. These delicious snacks come in seemingly endless varieties, are shelf-stable, and have been favorite treats for hundreds of years.

While they are similar, they have different origin stories, moisture content, and texture. So let’s delve into two of our favorite year-round cured meats. 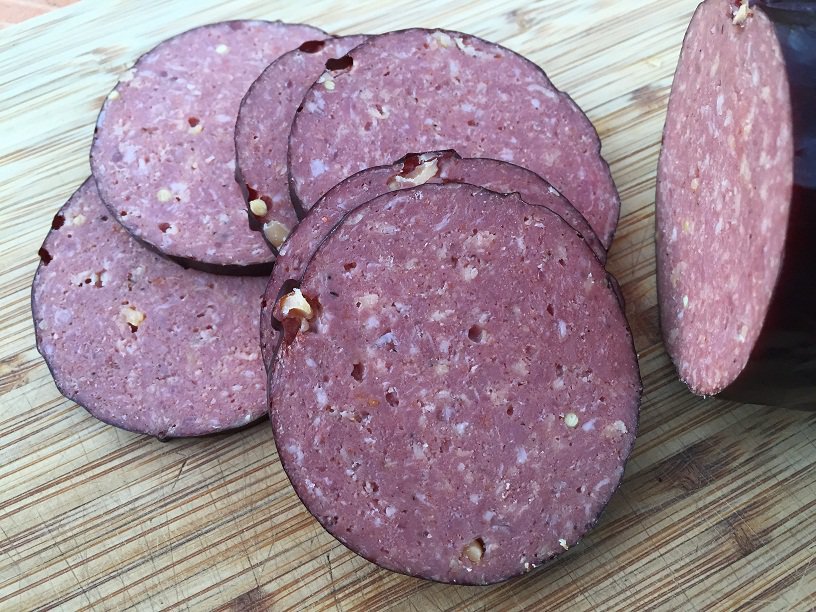 Salami refers to any cured, encased meat. Salami was first created in the warm, dry Mediterranean. Salami offered a way for farmers and peasants to preserve meat without refrigeration. Salami can be stored at room temperatures for up to 40 days.

Salami is traditionally made with pork but can also be made with beef, venison, or donkey meat.

The meat is ground, then mixed with fat and spices. Finally, the mixture is stuffed into a casing and fermented. The fermentation process dries out the meat, allows healthy bacteria to grow, and stops harmful bacteria.

There are hundreds if not thousands of different salami types. Salami varies by region, and each area has its specialty. Salami makers use different meats, spices, and preparation techniques.

The most popular salamis originate in Italy. For example, Genoa salami originates in Italy’s Genoa region. Genoa salami is usually made with pork, garlic, salt, whole peppercorns, and wine.

Felino salami originates from Felino in Italy. This salami has minimal spices and looks bright red. It is made with pork, cane sugar, garlic, red wine, and other spices.

Hard salami is often smoked or has smoked flavoring added. It is usually made with pork and has finely ground pepper. 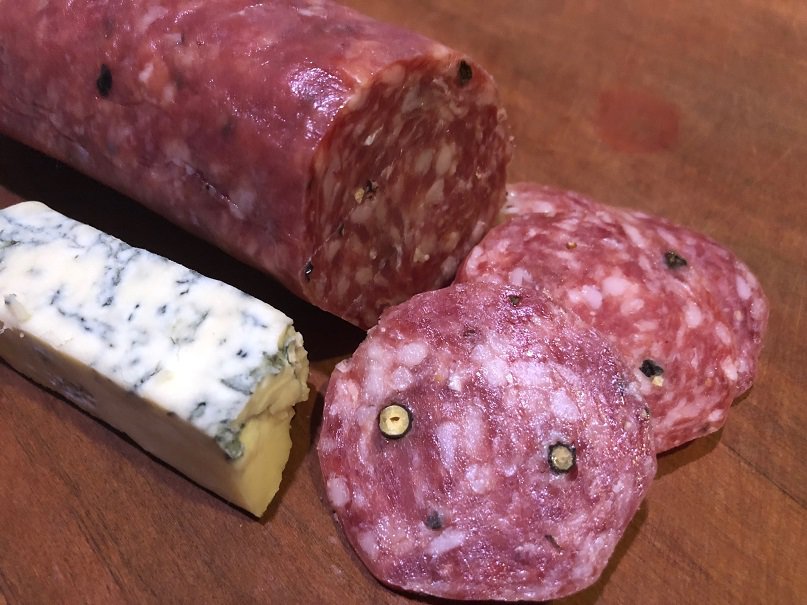 Pepperoni is one of America’s most popular types of salami. Pepperoni was first made in America by Italian-Americans. Pepperoni is spicy and well-known as a pizza topping.

What to Eat With Salami

People usually don’t just eat salami by itself. Salami is most often eaten as part of a charcuterie board with wine and cheese. Hot and cold Italian subs and sandwiches often feature salami. Salami can be used as an ingredient whenever you want a delicious, meaty, spicy addition.

Salami can be added to egg dishes such as scrambled eggs, omelets, and frittatas. Salami works well in both pasta salads and hot pasta dishes. It’s delicious with otherwise boring macaroni and cheese.

You can add chorizo to nachos for a meaty, spicy treat. Thinly slice pepperoni and add it to salads or leafy green recipes. To spice up your next brunch, add salami to your Bloody Mary as a garnish.

How Long Will Salami Last?

Salami is a hardy cured meat. Its low water content and the addition of preservatives and antioxidants help it resist bad bacteria.

If the salami doesn’t have a “Keep Refrigerated” label, it’s safe to keep it on the shelf.

Unrefrigerated whole salami usually lasts about six weeks. Cut salami should be refrigerated and will last about three weeks in the fridge.

What is Summer Sausage?

Summer sausage refers to a shelf-stable sausage that can be stored without refrigeration. Summer sausage is fermented and dried or smoked.

Summer sausage originated in Germany. The summer sausage process traditionally began during fall and winter when pigs and livestock were slaughtered. The meat would dry over winter when cold temperatures preserved the meat. Then, the sausage would be ready to eat in the summer.

Since there was no refrigeration until recently, summer sausage offered a great way to enjoy meat without worrying about it spoiling. Like salami, summer sausage is ground, spiced, cured, and stuffed into casings. It is usually made with pork but can be made with beef or venison.

Like salami, there are many different types of summer sausage. Summer sausage is either dried or smoked, and each preparation style offers a different flavor profile.

Summer sausage is most often made with pork or beef. Sometimes, it’s made with more exotic meats such as venison. Craft summer sausage makers mix in different ingredients and spices to make a unique and flavorful creation.

Popular summer sausage mix-ins include garlic, mustard seeds, and different cheeses.  Here is a great recipe for an all beef summer sausage.

What to Eat With Summer Sausage

How Long Will Summer Sausage Last?

Most summer sausage can be stored on the shelf for up to six weeks. After opening, it should be stored in the fridge and eaten within three weeks. Check the label for storage instructions.

Summer sausage originated in Germany and often has a smoky flavor. Summer sausage retains more moisture than salami and is softer and easier to slice and chew. Common additions to summer sausage include garlic, spices, and cheese.

Salami originated in Italy and has hundreds of varieties. Popular salamis include Genoa salami and pepperoni. Salami is often spicy and has a harder texture than summer sausage.

Salami and summer sausage are perfect treats for a picnic or to spice up any recipe that calls for a meaty flavor. Try both and let us know which your favorite is.