London Broil is an economical cut of beef that benefits tremendously from sous vide cooking.  I like to perform a few extra steps on the beef when I cook this cut and make it into a pretty tender roast that tastes like it was cooked on my smoker. 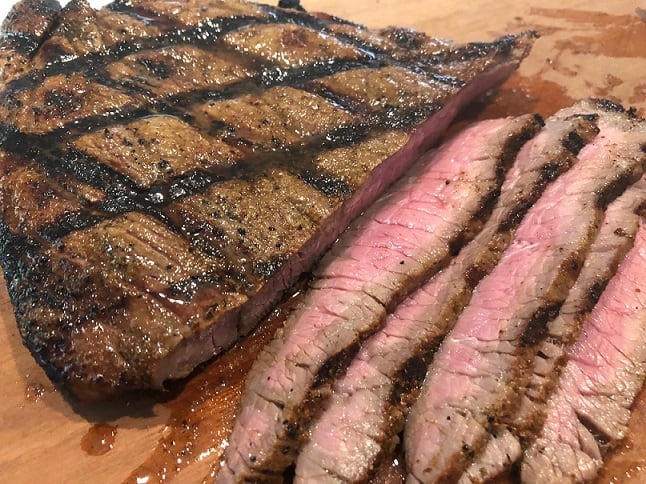 London Broil is a generic term for a large steak/roast that is usually cut from the Top Round.  The cut is flavorful but has little marbling and can be incredibly tough.

To make the steak more tender you will want to dry brine it.  Coat the steak liberally with kosher salt (approximately one tablespoon per pound) and let the steak rest in the refrigerator overnight.

After the steak has brined overnight rinse the steak to remove excess salt and pat dry with paper towels.

Optional Step:  If you want to make the London Broil taste like it was cooked on a smoker then brush each side of the steak with 1/4 teaspoon of Liquid Smoke.

Season the steak with a low sodium steak seasoning (there is already plenty of salt in the steak from the dry brine.)  I used Miner’s Mix Steak and Veggie rub.  You could simply go with black pepper, onion powder and garlic powder and it would still be amazing.

The steak was vacuum sealed and cooked sous vide at 129F for two hours (some recipes will simmer a London Broil for up to 6 hours).  I was using the Anova immersion heater and it worked great.

Just like the pretty much everything cooked by the sous vide method, this steak didn’t look too impressive coming out of the sous bag.  However, after a quick sear she was looking like a champ!

You can sear yours in a cast iron pan for a 90 seconds per side.  I seared mine on a GrillGrate panels that I heated over the stovetop burner.

Here is where I will lose any barbecue authority that I may have built up over the years.

I just used liquid smoke and cooked a bagged steak in a pot of water and it was just as delicious as a traditional Smoked Top Round Steak.

London Broil is usually a cut of Top Round.  This piece of beef comes from a working muscle on the steer and as a result it is very flavorful but lean and tough.  The combination of a dry brine and sous vide cooking helps make the steak tender.
Keyword Sous Vide London Broil