Soppressata is the name given to two completely different types of Italian sausage.  Both types of sausage are made from 100% pork and are great for charcuterie platters and sandwich making.

Let me walk you through the differences of these two sausages and share some recipes.

What most people refer to as soppressata is the fermented, dry cured and thinly sliced sausage you can get at the deli counter. There are many regional variations on this sausage such as di Calabria, di Puglia, etc.  This style of sausage is a special type of salami.  Sopressata is distinct from Genoa and Hard salami in that it has a coarser grind which results in very visible fat particles. 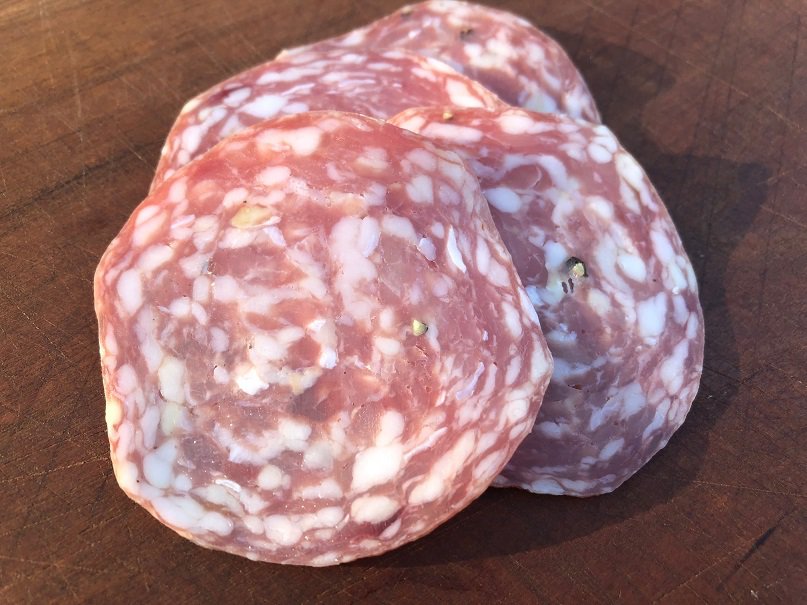 The di Calabria version of this sausage has DOP registration and must be made in Calabria from 100% pork that comes from pigs raised in the Calabria region of Italy.

There is a great recipe for this style of dry cured salami at Wedliny Domowe but, as it requires precise fermentation and dry curing temperature and humidity controls, the authentic version of this sausage is beyond the skill levels of most home cooks.

The name “Soppressata” is a bit confusing; in no small part because I don’t know how to speak Italian.  I read many descriptions of the sausage that said it got its name because it used to be pressed and somewhat flattened. To a degree, this reasoning is supported by a little Google Translate action.

But here is the thing…this style of sausage is not pressed any more and I can not think of any good reason why someone would have wanted to press a salami in the first place.

That brings us to the OTHER type of soppressata!

When you ask Google to translate the full name of this sausage here is what you get.

Soppressata Toscana is a fully cooked sausage, made in the Tuscan region of Italy, dedicated to making sure all of the pig is utilized.  Ideally you make this sausage with a pig’s head where the eyes, brains and ears have been removed.

Typically the pig head is simmered in water for 4-5 hours until everything is tender.  The meat, fat and skin are removed from the bones, roughly chopped, seasoned and then stuffed into large casings with some of the gelatinous cooking liquid.

Traditionally, this sausage is pressed to expel excess cooking liquid. This version of why soppressata is a “pressed sausage” makes much more sense than the reason given for the dry cured version.

After pressing, the Tuscan sausage is allowed to cool in the refrigerator where the gelatinous goodness sets firm.

I wanted to have a go at making this sausage but did not have access to a pig head.  While full heads are not available at my grocery, several interesting parts are, so I improvised!  I decided to make this a “Head to Tail” sausage went with pig tails, pork neck bones and jowl cheek meat. 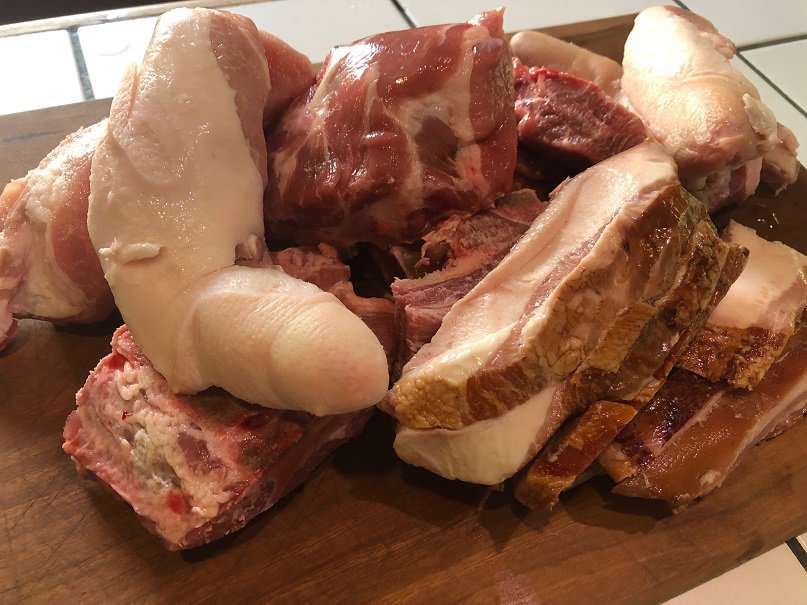 Add the neck bones, pig tails, salt and onion to a stock pot and just barely cover with water.  Bring the water to a boil and then reduce the heat to a gentle simmer.

Allow the meat to simmer for three hours and frequently skim any coagulated protein scum that floats to the surface.  After three hours, slice the jowl into strips and add to the simmering stock.  Continue to simmer for another 30 minutes.

Remove all of the meat from the stock and allow to cool until workable with your hands (~5 minutes).

Bring the stock to a boil and allow it to reduce in volume while you are working with the meat.

Remove all of the meat, fat and skin from the necks and tails. Be careful to not allow any small bones to remain with the meat.

Rough chop the strips of jowl into a 1/4 inch dice.

Combine all of the meat, fat and skin and season with: 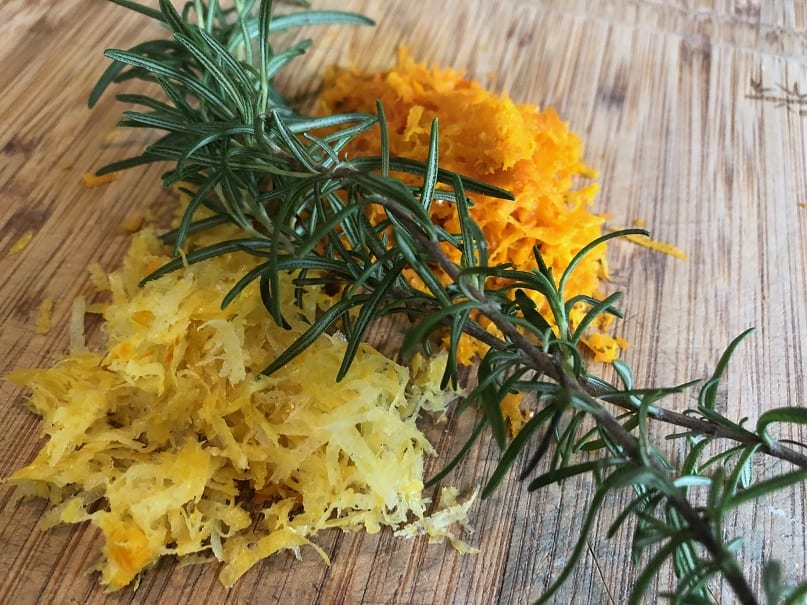 I prefer to mix everything with my hands as it lets me do one last check for any small bones.  One of the nice things about this sausage is that the meat is already cooked so you can give things a taste while you are mixing and adjust the seasonings on the fly. 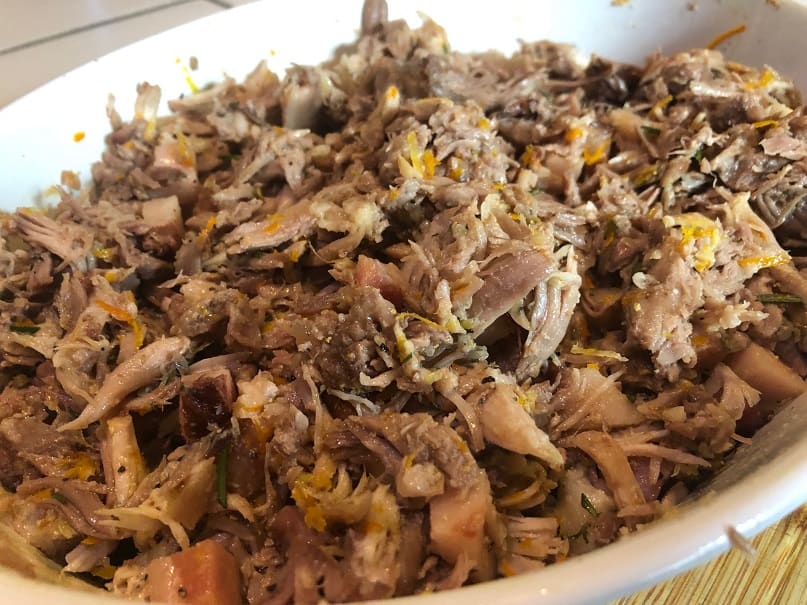 At this point the pork will be damp but has the ability to soak up more liquid.

Ladle 1 cup of the boiling stock into the pork and mix well.  Add more stock in 1/4 cup increments until liquid starts to pool in the bottom of the bowl.  This gelatinous stock is the glue that holds this sausage together.

Pack the meat tightly into 1.5 inch fibrous casings (or larger if desired) and tie off.  Place the sausages into the refrigerator to allow the collagen to congeal. 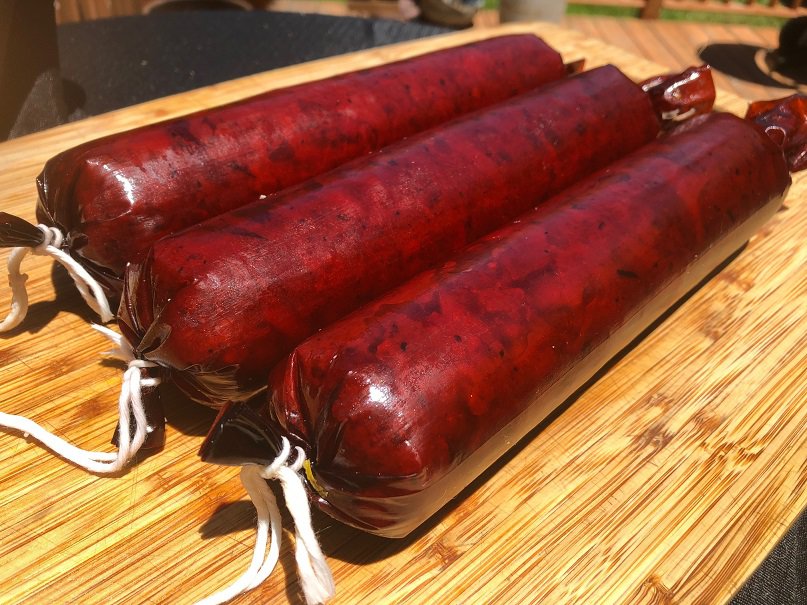 Let the sausage cool for at least four hours but overnight is preferable.

When you serve this sausage keep it cold and slice thin. There is a lot of richness to a sausage like this and it pairs well with some crusty bread and a cold, dry white wine. 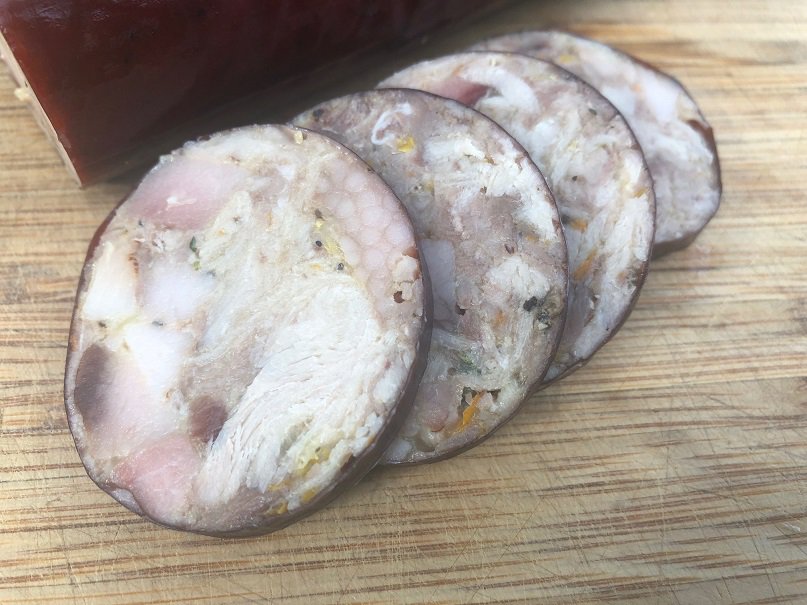 This is an extremely rich sausage so cut very thin and serve with a crisp dry white wine.
Keyword Soppressata