I was at the store the other day and saw some nice chuck roasts and briskets.  I couldn’t decide which would be better on my smoker so I bought one of each to do an official smoked chuck roast vs brisket comparison.

Both cuts of beef were just under four pounds with the brisket being comprised mostly of the flat with a little bit of point.  This was an awesome “side by side” and I learned a lot! 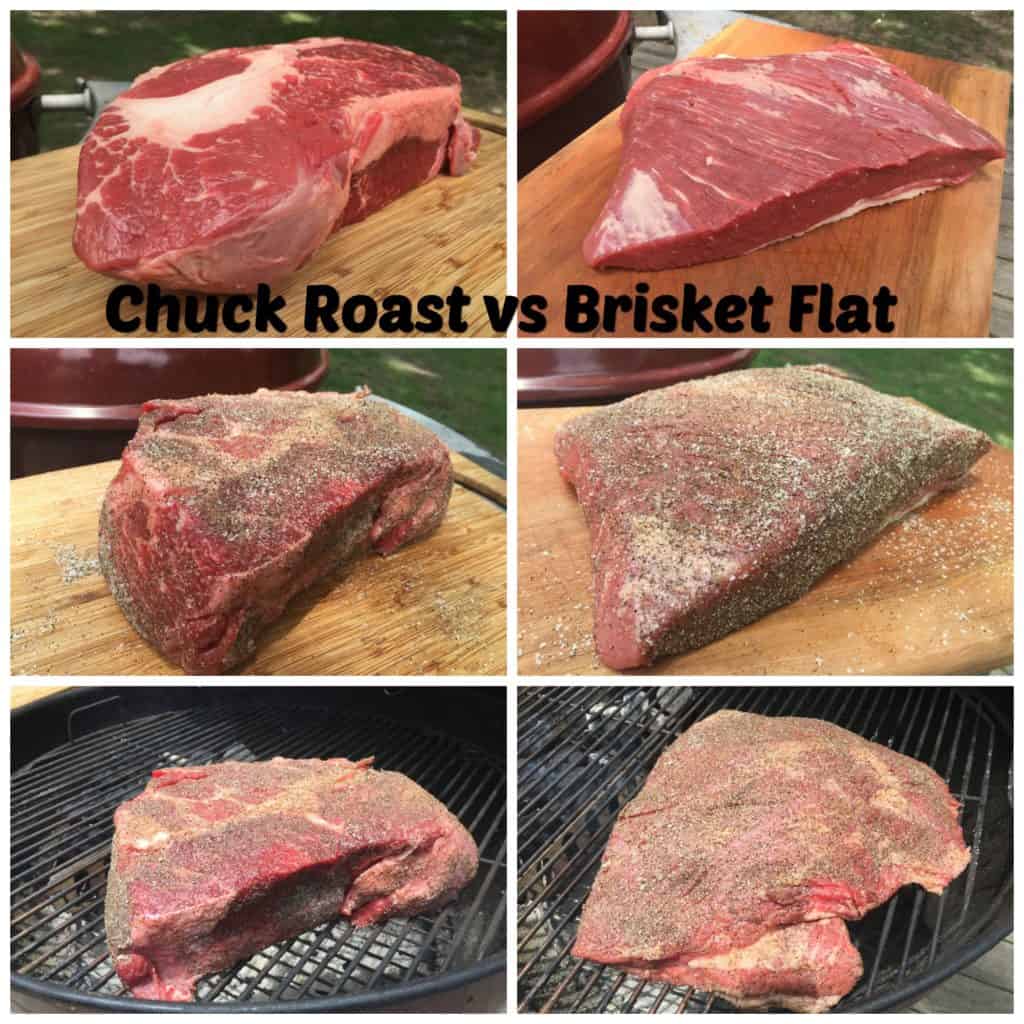 What is Different Between These Cuts?

The biggest difference between these two cuts is the intra-muscular fat.  The chuck will typically have a large amount of fat inside the meat while brisket has most of the fat on the exterior of the meat.  There is so much exterior fat on the brisket that people argue about whether the fat cap should be up or down in the smoker.  You never hear that debate for a chuck.

The chuck is composed of several different muscles The chuck is much more like the fatty, juicy “point” on a brisket instead of the lean “flat”.

The names of these cuts can be a little confusing so let me walk you through some of the nomenclature.  The terms “chuck roast” and “pot roast” are interchangeable.  I have seen recipes where people use a brisket flat to make “pot roast” but, in my opinion, briskets are not pot roasts.

The chuck is cut and sold in several different manners giving you cuts like an Eye Roast, Arm Roast, Blade Roast and Seven Bone Roast. Almost all of these roasts are composed of multiple muscles surrounded by fat, collagen and connective tissue.

The chuck and the brisket have more characteristics in common than different.

Both cuts come from working muscles on the front of the steer so they are tough but flavorful. They have a significant amount of fat and collagen that require a long cook time to break down.   Interestingly enough, according to Cook’s Illustrated, the collagen in both the brisket and chuck is mainly insoluble and does not break down into gelatin very easily.

Both cuts are great for feeding a crowd, are relatively inexpensive and are some of the best meats to put on your smoker.

How to Smoke on a Kettle

I seasoned the chuck and brisket the same and used a kicked up beef rub:

Kicked Up Beef Rub for Chuck and Brisket

If you wanted to go a little bolder you could season them with my Championship Brisket Rub.  You could also pump up the flavor with one of these brisket injections.

I smoked the pot roast and the brisket on a Weber kettle at about 275F with a little bit of cherry wood for smoke.

The cook was pretty straight forward.  The beef was smoked for four hours until it stalled out at 162F then wrapped tightly in foil and powered through for two more hours until it was probe tender at about 205F internal.

While the beef was smoking it got spritzed about every 45 minutes with a new mix I am working on.  My beef spritz is primarily coffee with some hot sauce, cider vinegar and Worcestershire.  No real recipe on it yet..still a work in progress.

Straight out of the smoker these two cuts couldn’t have looked more different.  The lean brisket flat was respectable and unpretentious.  The smoked chuck roast was oozing melted collagen and simultaneously looked luscious and a little drunk. 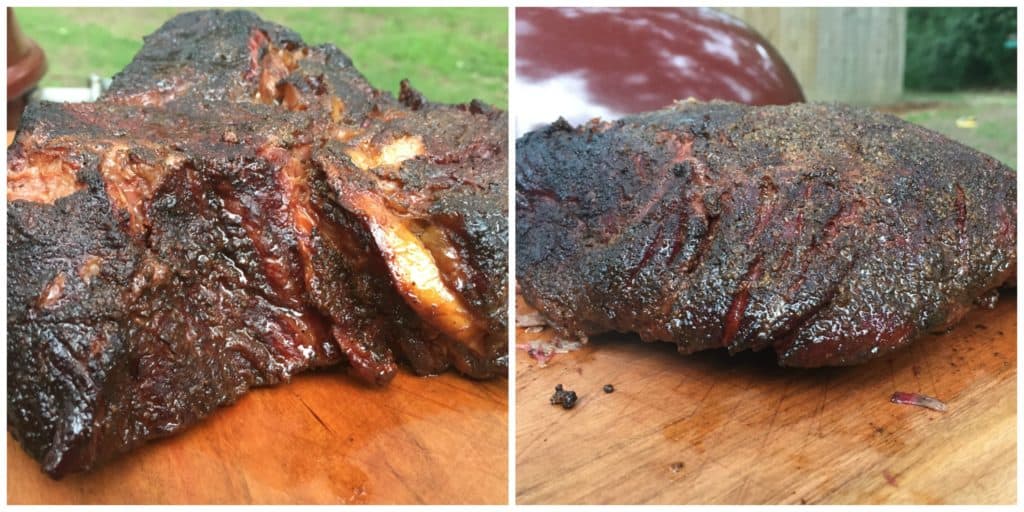 When I sliced them open a similar theme emerged. The smooth brisket slices were 100% prettier than the ragged fat strewn shreds of chuck.

But when I dug in for the taste test the tables turned. 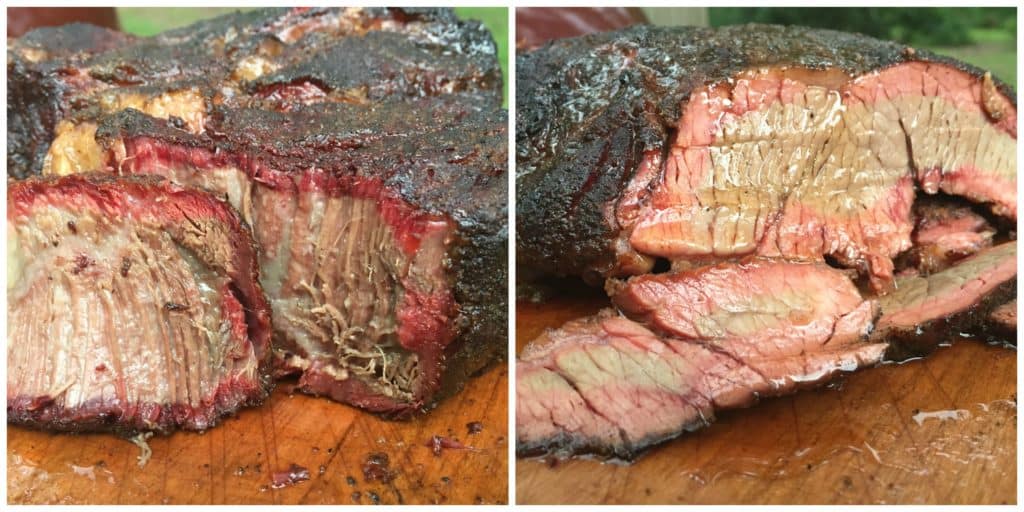 While the brisket looked prettier the smoked chuck roast was out of this world delicious.  After tasting slices of both the smoked chuck and brisket I was sold.  I wrapped the smoked brisket flat in foil, threw it in the refrigerator and spent the rest of the afternoon devouring that luscious chuck!

I thought I had reached a pretty solid conclusion in the chuck roast vs brisket battle.  The brisket was prettier but the chuck was better eating.

But then the next day happened.

I decided to try the leftovers side by side and couldn’t believe how much the flavor profiles had changed.  The brisket was so dang good it made me week in the knees.  The chuck was okay but nothing special. 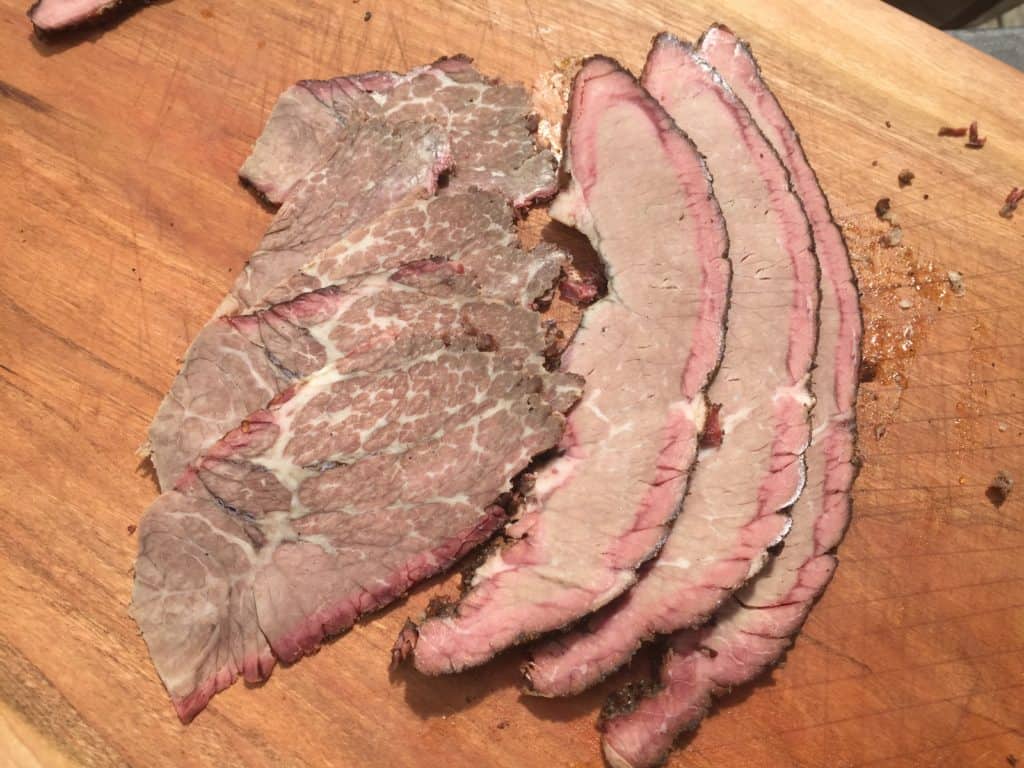 I had a pack of drooling pups circling the kitchen counter at this point and they know I am a sucker for heads cocked to the side with begging doggie eyes.

I had to give them some snacks and I didn’t hesitate.

I tossed all those pups slices of the chuck and kept that amazing brisket all to myself!

Which is the Best?

I hate to chicken out but this battle is a tie.

If you are looking for something that tastes amazing and don’t care about presentation then go with the chuck roast.  I would suggest going ahead and turning the chuck into shredded or chopped beef, adding a touch of spicy hot sauce and serving as sandwiches.

If you are looking for something that tastes great and looks beautiful then go with the brisket.  If you are fortunate enough to have leftovers the next day then you will be glad you smoked a brisket!

If you want to check out another Head to Head brisket battle then check out Brisket vs Tri Tip! 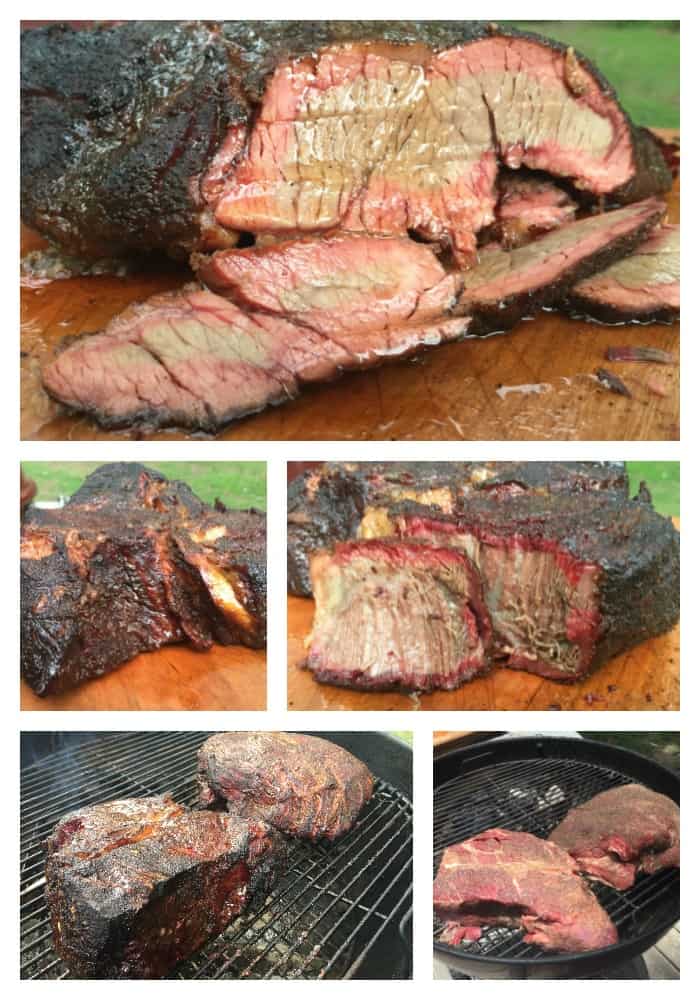