Smoking bratwurst is a quick and easy cook on your barbecue pit that can make some seriously great eats if you pay attention to the little details.  Keep scrolling and let me show you how to smoke brats and make them turn out great!

How to Smoke Brats

The steps below apply to any kind of smoker.

I am using a Z Grills pellet grill for this cook but you can also cook brats in an electric smoker by the same technique.

If you are using an electric smoker do not soak your wood chips in water before adding them to the smoker box.  The brats do not take long to cook so you want your wood chips to put off as much smoke as possible in a short period of time.

The Steps for Smoking Brats Are: 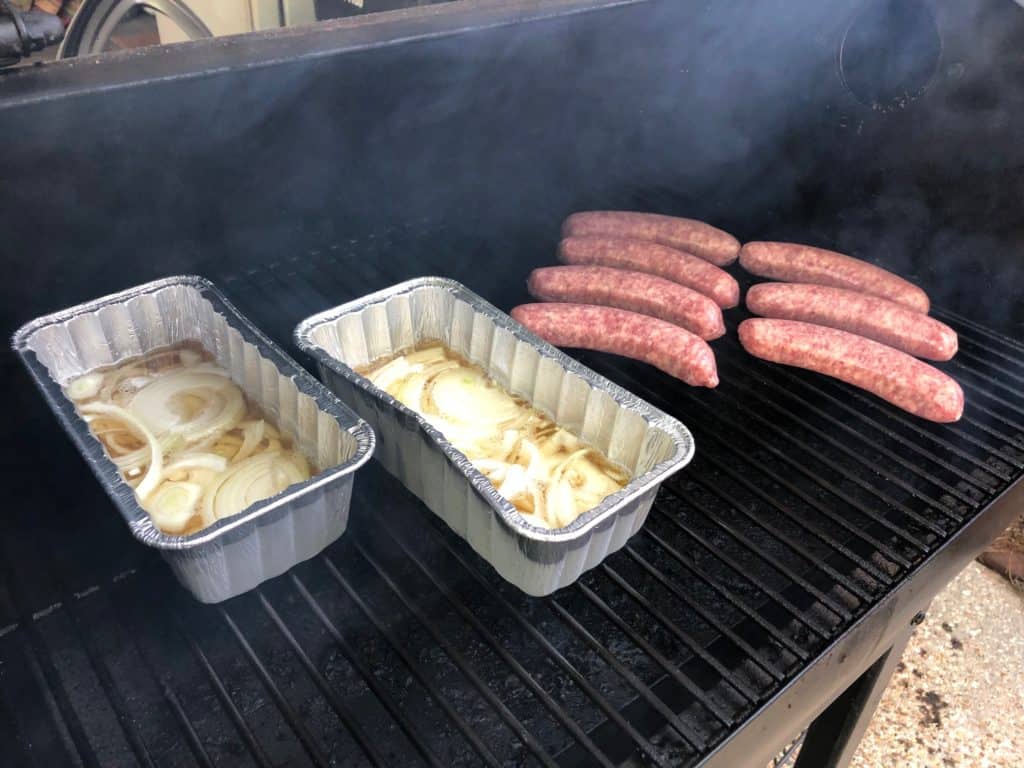 Why Smoke at 225F and How Long Does it Take?

I smoke bratwurst at low temperatures to give it plenty of time to take on flavor from the smoke.  It typically takes about 45 minutes at 225F for the brats to finish cooking.

You could easily smoke these guys at 300F if you wanted but they would only be in the smoker for about 30 minutes.  Smoking at a lower temperature such as 200F would increase the smoke profile but I have a hard time controlling the temperature of my pit at such a low setting.

It is important that you monitor the internal temperature of the brats.  The brats are done at 165F.  Every degree past 165F takes you a step closer to breaking the meat/fat emulsion inside the sausage.

If I grind my own meat and make the sausage myself then I will cook the sausage to 150F.  If I don’t know exactly what is in the sausage then I err on the side of caution and go to 165F.  By the way here is my homemade bratwurst recipe.

If you break the emulsion by overheating the brats will form big pockets of grease under the casing that will spew juice everywhere when you bite into it.  You end up with the confusing situation of juice running down your arms while gnawing on a dry sausage in your mouth.

I transfer the brats to the beer bath when they hit 140F and let them soak up another layer of flavor for about fifteen minutes until they hit 165F. 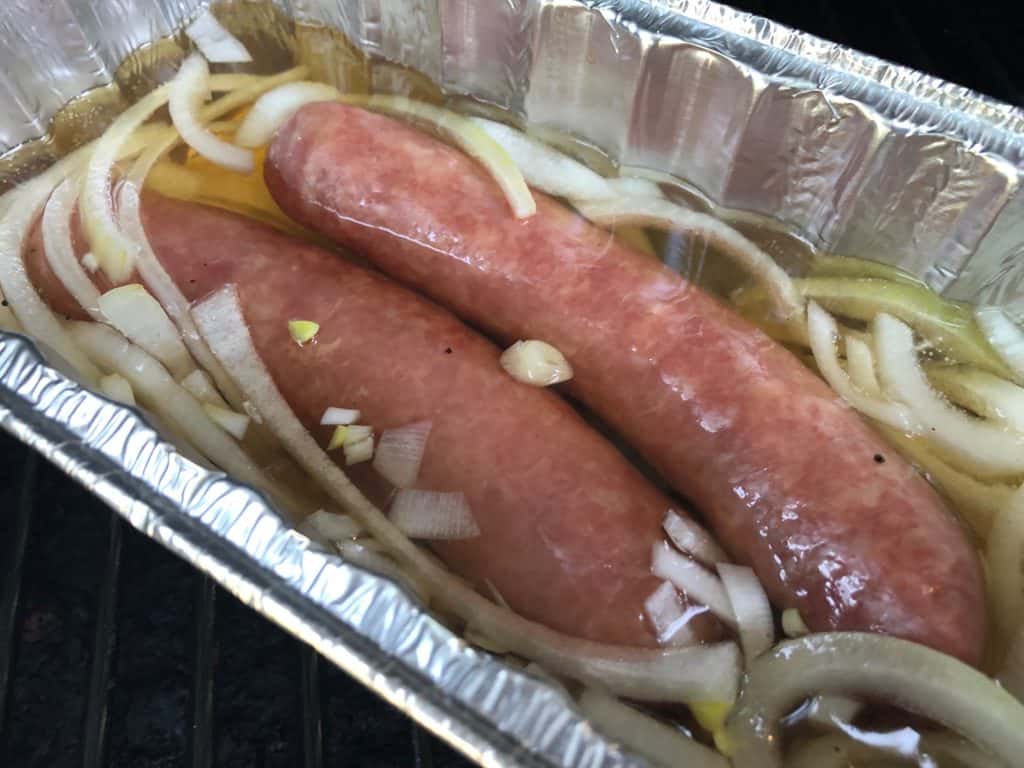 It can be a tough call when you are deciding between cooking brats “Low and Slow” on a smoker or “Hot and Fast” on a grill.  Here are some of the pros and cons of each method.

You can grill a brat faster than you can smoke them so if you are in a hurry the grill is the way to go.  That being said, when I smoke brats I have time to drink two beers and I only get to drink one when I grill!

The skin on a grilled brat is crisper and has more snap on it than a smoked brat.  You can also put down some nice grill marks when grilling.

The biggest benefit of grilling is also the greatest problem.  You get an amazing aroma when the grease drips out of the brat and hits the flame.  Some of that aroma makes its way back onto the sausage and adds an amazing flavor.

The fact that the grease is dripping out means that you are breaking the sausage emulsion and your brat is drying out.  It is also easy for the dripping grease to cause a flareup and burn the brats.

Smoking the brat gives the skin a reddish color and toughens it up a little.  Some folks don’t like the tougher skin on a smoked bratwurst.  It doesn’t really bother me…it is just a little tougher than the skin on a grilled brat and is still easy to bite through.

You can put down a nice little smoke ring on brats which is always fun to see. 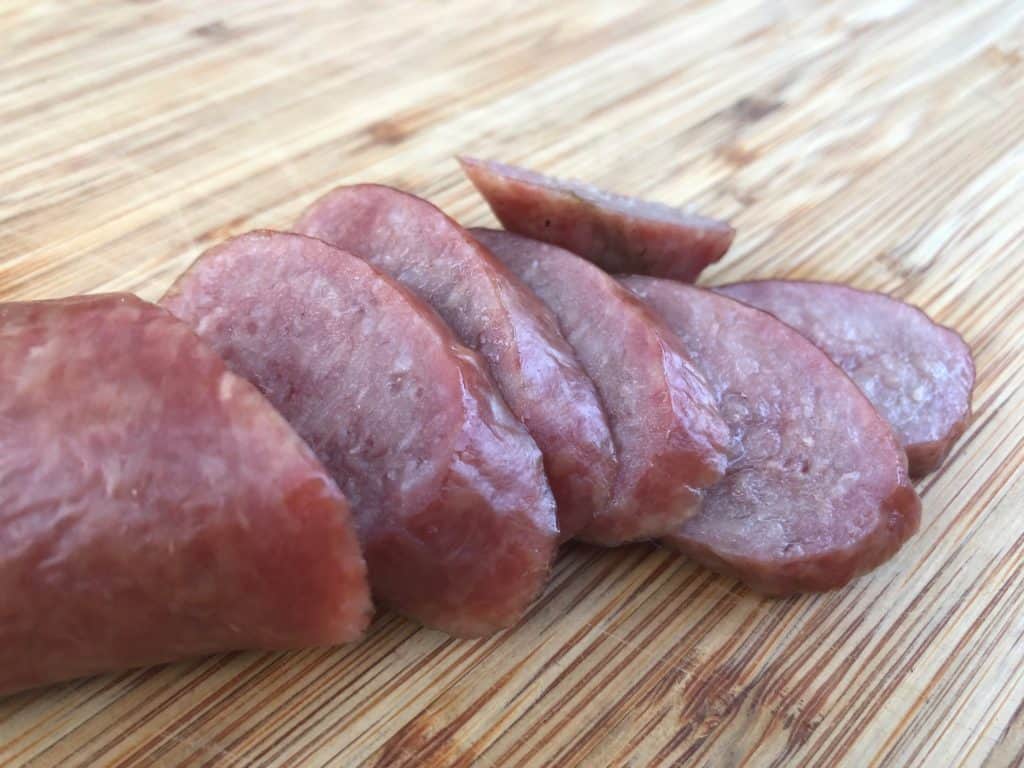 The Details That Matter

There are a few details you should pay attention to that will make the difference between an “okay” and “amazing” brat.

The brats are not going to be in the smoker very long (compared to a brisket or a pork butt) so I prefer to go with a strong wood like hickory.  Bratwursts are traditionally a boldly flavored sausage and its natural flavor profile will not get washed out and overpowered by hickory.

If you don’t have hickory available then pecan is a great substitute. There is nothing wrong with using a milder wood like apple if you want a lighter smoke profile.

Please get some decent buns!  A brat is a heck of a sausage and you shouldn’t waste the experience with a cheap bag of hot dog buns.  Spend an extra two bucks and buy the sturdy buns with poppy seeds or get some made from potato rolls or pretzel dough.

Veggies! Cook up some onions and peppers or grab some crunchy kosher dill pickle spears.  Either way, the veggies bring more flavor and help balance out the heavy greasiness of the sausage.

Mustard! I put out a couple of different kinds of mustard for people to choose from. Plain yellow, spicy brown and Dijon mustards are staples at our house.   Whatever you do, do NOT let a bottle of ketchup ever get close to a bratwurst.  I don’t believe many true rules exist in the world of barbecue but no ketchup on brats is one of them. 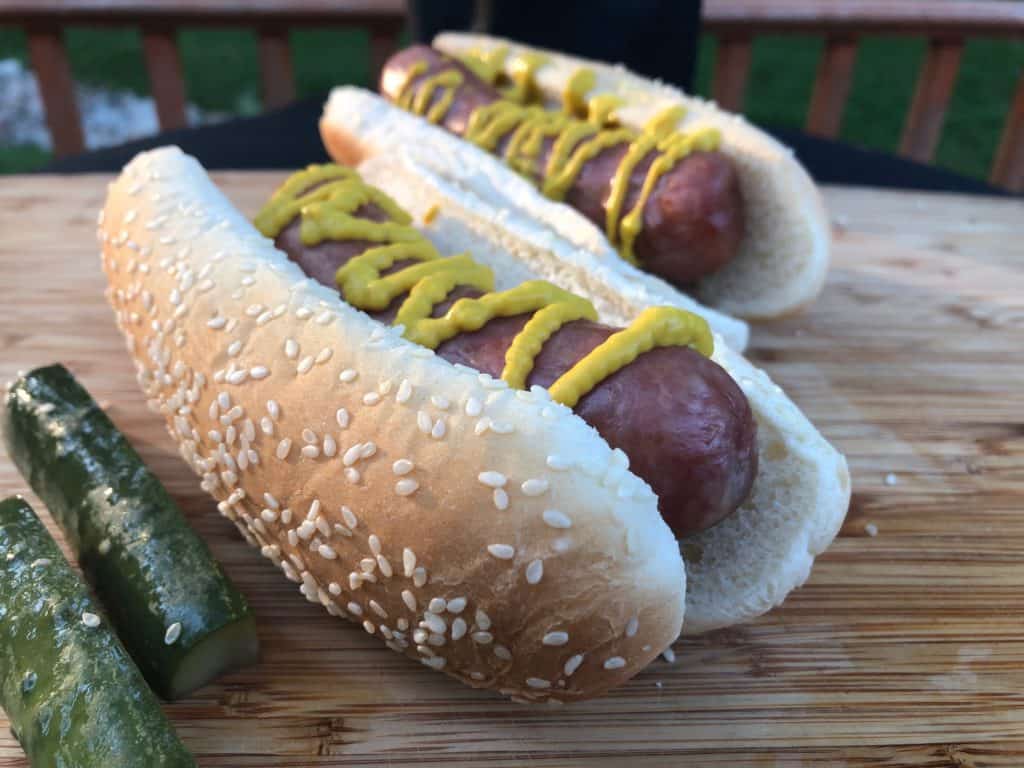 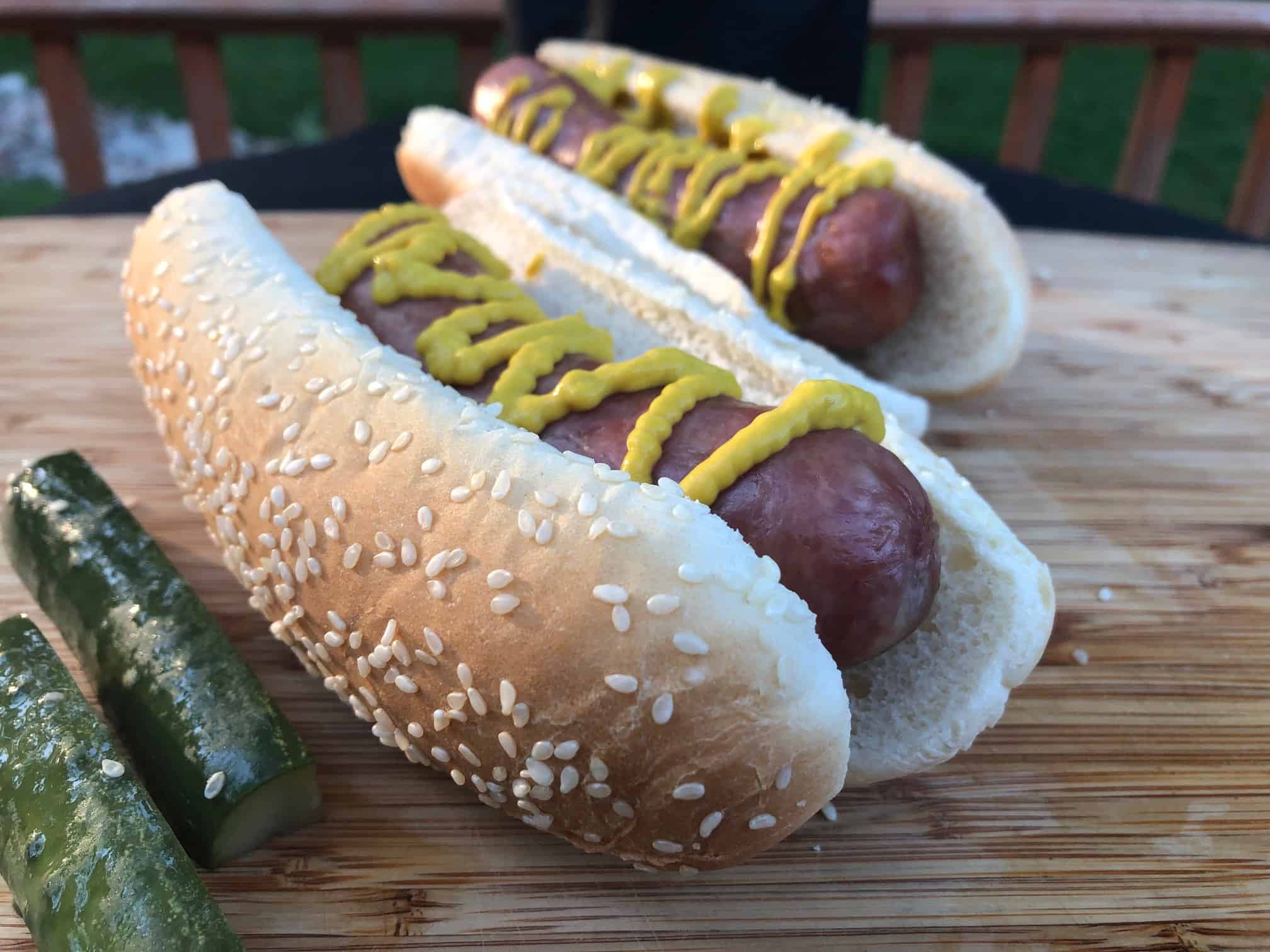 Brats are smoke on a pellet grill to a temp of 140F and then transferred to a beer and onion bath where they simmer in flavor while they finish up cooking.
Print Recipe Pin Recipe
Prep Time 5 mins
Cook Time 45 mins
Total Time 50 mins
Course Main Course
Cuisine American
Calories 400 kcal

Once the brats have reached 165F you can remove the beer bath from the smoker and use it as a "holding tank" for the brats.  The brats will not overcook while holding but will soak up more flavor.
Keyword Smoked Brats