Salted, cured meats have always had their place in our pockets, tables, and cravings. However, the varieties and their differences can be a little overwhelming and confusing. Salami and pepperoni are satisfying and delicious but have different backstories and flavors.

Let’s take a quick look at these two famous meats to understand what they have in common. 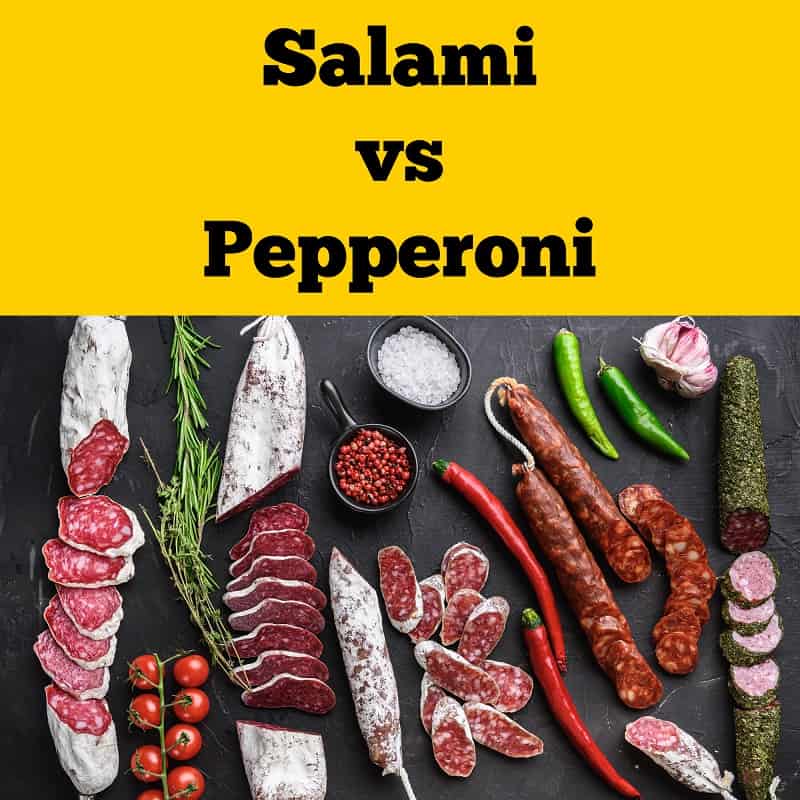 Salami is a cured sausage that is most often made with pork. This hardy, tasty sausage has been around since Roman times (if not before) and was a popular way to have a meaty meal without needing fresh meat. Even with today’s modern refrigeration, salami and pepperoni with their unique and spicy flavors are still a sought-after delicacy and delight.

Salami is not cooked, but it is not raw either. Instead, the meat is ground, mixed with salt, pepper, sugar, and spices, and then fermented and dried.

Salumi (with a “u”) refers to all Italian meats that are cured, cooked, or preserved.

Salami is believed to have originated in Italy in Roman times. The word salami comes from the Latin word “salare,” which means salt. The Italian word “salame” refers to all types of salted meat.

Salting and curing meat allows the salami to last for up to 40 days at room temperature. In the days before refrigeration, cured meats offered a way to supplement an irregular supply of fresh meat.

Salami was popular with peasants and hunters as it could be carried without going bad and enjoyed as an on-the-go meal.

Salami was historically made in the Mediterranean and southern Europe, where the warm, dry climate was perfect for fermenting sausage. Italy, Spain, Hungary, Germany, and France are all known for their salami production.

Its believed that salami has been made for over 2,000 years. Italy was probably the first country to produce salami. However, many Mediterranean and southern European countries were making salami and other cured meats at the same time.

Each salami type represents a specific region and a different set of techniques and ingredients. Italy is known for Genoa, Finocchiona, Mortadella, Pepperoni, Salami Cotto, and Soppressata. In addition, France, Hungary, Spain, and Germany all have traditional and distinctive salami recipes.

Salami is most often made with pork. However, it can be made with beef, veal, or poultry. Some countries even use duck or donkey in their salami recipes. Sometimes salami is made with a mixture of meats such as pork and beef.

While pepperoni tastes and even looks slightly different from most salami varieties, pepperoni is actually a type of salami. However, this variety is relatively new and was first created by Italian Americans in the early 1900s and has evolved into America’s favorite pizza topping.

Pepperoni is a salted, cured sausage and has a unique spice blend. It was first created by Italian-Americans and first noted in 1919 in New York City. The word “peperoni” refers to bell peppers, and bell peppers are a distinct ingredient in pepperoni. Today, pepperoni is the most popular pizza topping in America.

Pepperoni is based on salamis made in southern Italy. It might have been inspired by spicy Calabria and Apulia salamis that feature dried chilis. Pepperoni started to become popular in the early 1900s in New York when Italian-American butcher shops and pizzerias began to flourish.

Pepperoni pizza is a uniquely American concoction. Pizza was born in Italy, but usually featured tomatoes, chees, oil, garlic, and anchovies. The first documented pepperoni pizza was first made in the 1950s.

In a nod to ancient history, pepperoni became popular because pizza chains loved toppings that traveled well and were inexpensive.

Pepperoni is made with pork or a mix of pork and beef. You can get turkey pepperoni that must be labeled as such. The meat is ground, and salt and sodium nitrate are added to cure the meat. Pepperoni’s distinctive color comes from nitrate.

It is seasoned with peppers, garlic, fennel, mustard seeds, and paprika.

Lactic acid bacteria are added to lower the pH balance for better preservation. Finally, the meat mixture is stuffed into casings and ferments before drying for around 20 days.

The Key Differences Between Pepperoni and Salami

Salami refers to any salted, cured meat, and pepperoni is actually a specific type of salami. Salami is an umbrella term that covers delicious meats from different areas.

Pepperoni is a specific type of salami that was first made in America and is an extremely popular pizza topping.

The main difference between salami and pepperoni is pepperoni’s distinct taste and ingredients. Salami could be made from various meats, and different regions produce salami with different spices.

However, pepperoni is usually made with pork or a mixture of pork and beef. So if it’s 100% beef, it is labeled beef pepperoni. If it’s made with turkey, it’s labeled as turkey pepperoni.

Pepperoni is spicy, slightly smoky, and has a soft, fine-grained texture.

Pepperoni and salami are usually served differently. Pepperoni is a very popular pizza topping, and salami is often served as part of a cold charcuterie platter.

Which Is Better – Pepperoni Or Salami?

Pepperoni is a popular pizza topping because it’s absolutely perfect on pizza. It heats well and has crispy, curly edges.

Salami is more versatile and often used in charcuterie boards, with wine, and as a snack. It’s also popular in Italian sandwiches and other hot and cold Italian dishes.

Can You Substitute Salami for Pepperoni on Pizza?

You can substitute salami for pepperoni on your next pizza. However, salami is less spicy and less flavorful. Salami turns a different color when cooked in the oven and burns quickly. With its spicy flavor, gorgeous color, and perfectly crispy edges, Pepperoni is the preferred pizza topping.

If you want to try using salami on pizza, you might want to add extra spices such as garlic or chipotle.

Salami and pepperoni are both delicious and distinct. Salami’s first creators would be proud that their meat made to travel well has indeed traveled well while acquiring new flavors and textures for new generations.