I was surfing Amazon the other day and stumbled across the Napoleon Shish Kebab Wheel rotisserie attachment.  It looked cool, cost less than $20 and had a bunch of nice reviews. 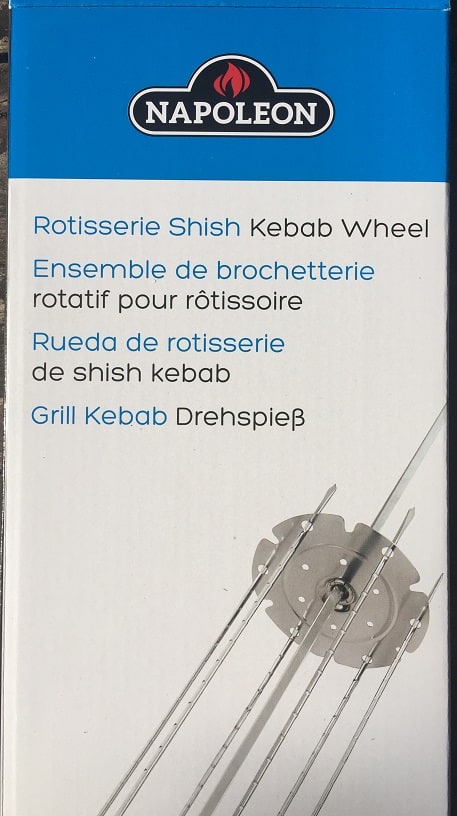 I love breaking out the rotisserie and spinning meat over open flames.  Cooking outdoors is serious fun for me and watching a rotisserie spit turning elevates that fun to a whole new level.

I have owned several rotisserie accessories over the years including the Rib-O-Lator and a couple of different baskets. I am a sucker for grill gadgets and when I saw this shish kabob wheel I knew I had to try it out!

The kit comes with two support wheels and six shish kebab spits.  It took me a few minutes to figure out how to put everything together but it made sense in the end.

One side of the kebabs fits into the grooves and inner holes. 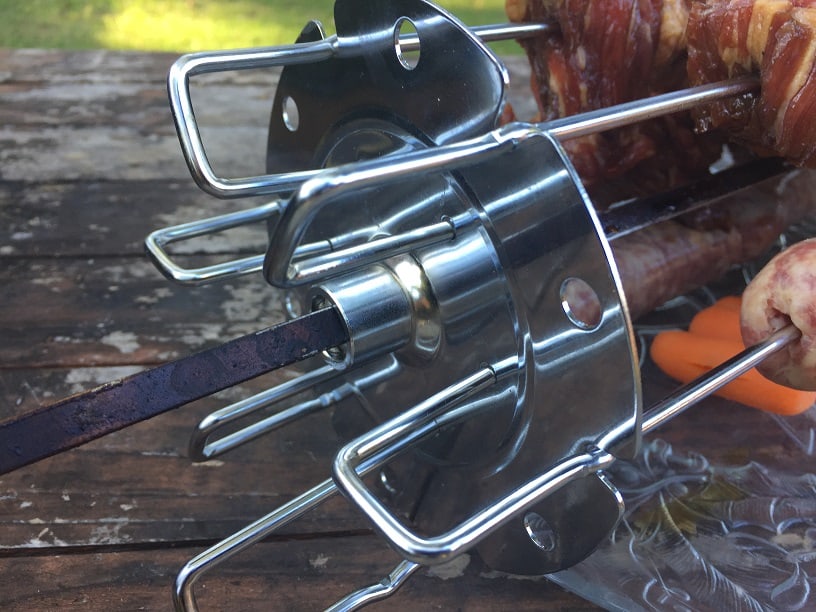 The other end of the kebab spits slide through the upper holes on the other support ring.

Both support rings are held onto the rotisserie spit with thumb screws.

For the inaugural run I loaded three spits with marinated beef chunks, two spits with bratwurst and one with baby carrots.  Why carrots?  Heck if I know…I was feeling frisky.

The beef chunks were roughly one inch cubes of sirloin steak that had been marinated in soy sauce, brown sugar, garlic, lime juice and ginger.  I just threw the marinade together and was not working from a recipe.  The beef was marinated for about four hours before it went onto the spit.

The kebabs are long enough to easily hold two bratwursts.

I loaded everything onto my Weber kettle rotisserie with the coals banked for indirect high heat.  I used a full chimney of lit Kingsford charcoal and made sure when I banked them on the side of the grill that none of the charcoal would be directly under the shish kabob wheel.  The wheel is compact enough that I did not have to remove the cooking grate.

(Although I was using this toy on a Weber kettle you can use it on just about any gas grill as well.)

I turned on the rotisserie, stepped back to watch the wheel spin and busted out into a big, goofy grin.

I learned several things in this cook.  The first thing I learned is that grilling baby carrots on a rotisserie shish kebab is a dumb idea. The carrots were more than happy to fall off and, to be honest, I was glad that they did.

I also learned that when you use this wheel assembly you will be happier if all of the spits are loaded with the same thing.  The bratwurst were finished after about 45 minutes but the marinated sirloin needed longer to cook.  Taking the spit with the brats off of the wheel while it was still over a hot charcoal grill was just about as much fun as you can imagine.

Speaking of taking the spits off the wheel, the other thing I learned (that made me feel extremely stupid) is that the spits are HOT.  I was careful when I took the spits off but did not wait long enough for them to cool down before I grabbed one to pull off the beef. Ouch.

The end products turned out pretty nice.  The wheel did a fine job for grilling the brats but I still prefer smoking bratwurst over this method.

The marinated sirloin was an absolute delight. I got a beautiful char, the beef was tender and the flavors from the marinade made my mouth happy. 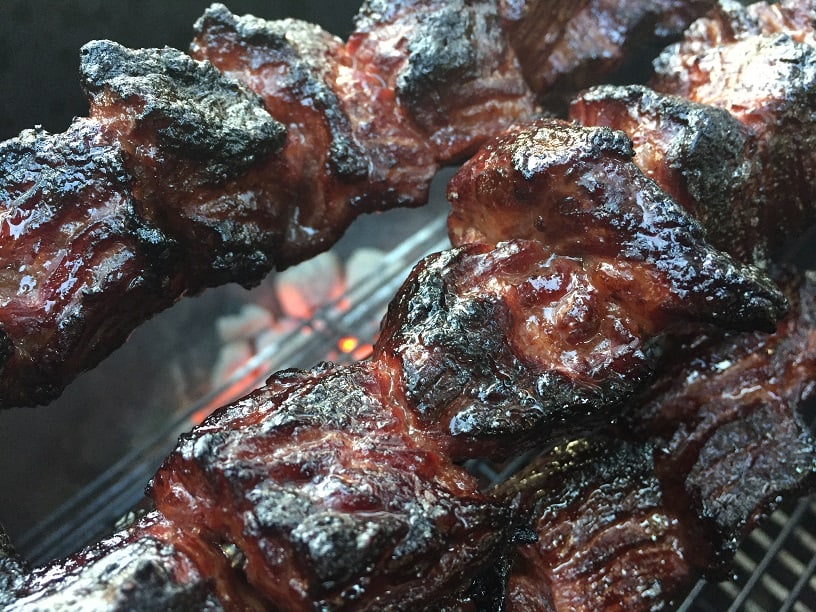 Should You Buy This?

I had a lot of fun playing with this grill accessory and it worked exactly as advertised.  That being said, the shish kebab wheel didn’t bring any functionality to the party that I didn’t already have with the Rib-O-Lator.  This gadget is going into my stash of grilling gear that is too nice to throw away but that I probably won’t use again.

For me the best way to think about this accessory is that it is different, interesting, works as advertised and only costs about $20.  That combination ticks all of the boxes for something that would make a great gift for the griller in your life.  When someone gets this as a gift they will be excited to try it out and will get at least $20 worth of entertainment.  Beats the heck out of buying them a set of grill tongs.