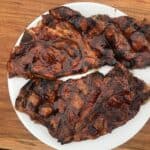 Smoked and Grilled Pork Steaks on the Weber Q1200 Who says you can’t cook amazing barbecue on an itty bitty gas grill?  This is a powerhouse of a technique for making killer grilled pork steaks! 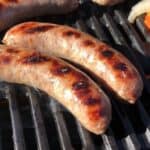 Beer Brats on the Weber Q1200 Here is another fun way to put a Weber Q1200 to use, making Beer Brats!  These were some of the best beer brats I have made in years!  The trick is to make sure the onions and peppers have plenty of time to simmer in the beer before the brats start poaching. 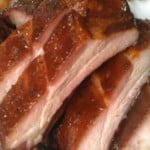 How Long to Smoke Baby Back Ribs at 225F Your complete guide to smoking baby back ribs. We look at the influence of using foil, how large the ribs as as well, the preferred tenderness and throw in a few extra tips.

How Much Pulled Pork Per Person A guide and calculator to figure out how much pork to buy and the appropriate serving size.  We also throw in some ideas on what to do with leftovers. 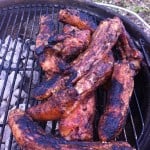 Smoked Pig Tails Don’t knock these until you try them.  Pig tails are like bacon on steroids.  I rarely cook these just because of how rich, fatty and decadent they are.  if you want the skin to be tender you MUST braise the tails first. 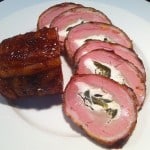 Grilled Bacon Wrapped Stuffed Pork Tenderloin This recipe looks impressive but was incredibly easy to put together.  Wrapping pork in bacon is always a winning combination! 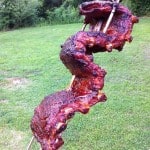 Two Takes on Rotisserie Ribs You can do a lot more with ribs than the same old “3-2-1” sticky sweet competition style recipe.  This article shows you two extremely different ways of cooking ribs on a rotisserie.  Let’s take those bones for a spin! 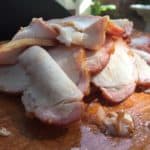 How Long to Smoke a Pork Loin We look at two different ways of smoking a pork loin, for sliced or shredded pork, along with the factors that influence cook time and the target temperatures you are aiming for. 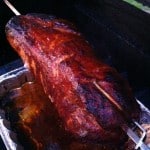 Rotisserie Pork Loin Two takes on cooking a pork loin on a rotisserie. I like cooking loins on a rotisserie more than chickens. Loins seem like they were perfectly designed for rotisserie grilling.  Check out the rubs and injections I use to make these rotisserie pork loins amazing! 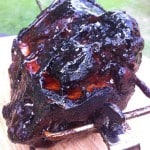 Rotisserie Pulled Pork I was curious if I could make some great pulled pork on a gas grill with a rotisserie. Why? Just because I guess. I used a bone in pork butt for this cook and it turned out much better than I expected! 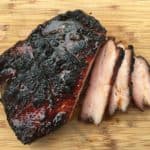 Smoked Pork Belly If you are fortunate enough to find some pork belly to cook then here are two techniques that will simply pack it with incredible flavor. These were some nice days at the grill! 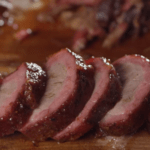 Competition Style Pulled Pork A detailed look at several different ways competition teams prepare and smoke pork butts for pulled pork. The level of trimming and the approach to maximizing the money muscle are fascinating. 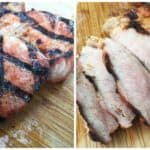 Pork Sirloin Tip Roasts: Smoked or Grilled for Good Eats! I picked up a pork sirloin tip roast from Costco and spent some time figuring out the best way to cook this cut. I think it closely resembles a loin and benefits from grilling and brines. It is an okay cut but nothing amazing. 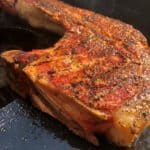 The Most Interesting Pork Chops in the World Have you ever heard of a Kan Kan pork chop? I hadn’t either until I saw them being sold by Cheshire Pork. This is an incredibly interesting way of cutting pork chops. These chops were a blast to cook and delicious to eat! 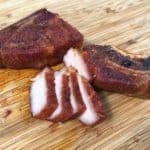 How Long to Smoke Country Style Ribs at 225F A close look at how to smoke country style ribs. There are a couple of different cuts of pork that are sold as Country Style Ribs and that makes cooking them confusing. This article will explain everything you need to know. 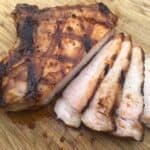 How to Grill Thick Cut Pork Chops on a Weber Q1200 There are lots of ways of cooking pork chops but I decided to throw this recipe a curve ball by using a mayo slather.  As long as you don’t cook your chops past 145F then they are going to turn out just fine. 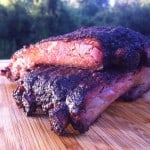 Baby Back Rib Rub Recipes: Three Styles Ever feel like your barbecue is stuck in a rut? Tired of using the same flavor profiles again and again? Here are a couple of completely different dry rubs to try on your baby back ribs. Go ahead and change things up every now and then. 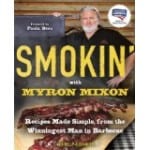 Myron Mixon Baby Back Rib Recipe Take a sneak peak at how the Winningest Man in barbecue cooks ribs that win him the big money. Competition techniques are constantly evolving so I suspect this recipe is no longer exactly how Myron does ribs. It is still a pretty dang nice technique though! 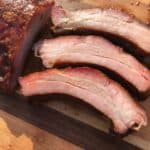 The Best Wood for Smoking Ribs Have you ever wondered about which smoke flavors pair the best with different types of meat? It turns out that the folks on the competition bbq circuit wondered that as well and have already done all of the research for you. Come find out what are the best wood flavors for smoking ribs. 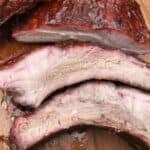 Baby Back Ribs at Costco The Costco baby back ribs are extra large and meaty.  Some people love the size of these ribs while others think they taste too much like a bland pork loin.  These ribs are big enough that it is worth taking the time to soak them in a brine overnight. 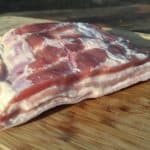 Where to Buy Pork Belly One of the hardest parts about making an incredible dish like pork belly burnt ends is finding a raw pork belly to start with.  You wouldn’t think it would be difficult to find this iconic cut of pork in the grocery store but you would be wrong.  Unless you have a Costco nearby then you are probably going to need to order some online.  This article shows some great sources where you can buy a pork belly. 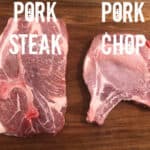 What is the Difference Between Pork Chops and Pork Steaks? This is a quick guide that illustrates the differences between these two cuts, where the come from on the hog and the cooking challenges presented by the lean chops. 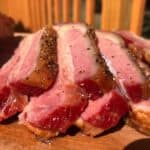 What is the Difference Between Bacon and Pork Belly? The confusion between bacons and bellies is understandable.  This article shows you the key differences between these to wonderful cuts and dispels some myths about some “natural” products.