When I was shopping for my latest pellet grill I looked at Rec Tec and Traeger and, after doing the research, bought a Rec Tec.  Let me walk you through the pros and cons of these brands so you can decide which is right for you. 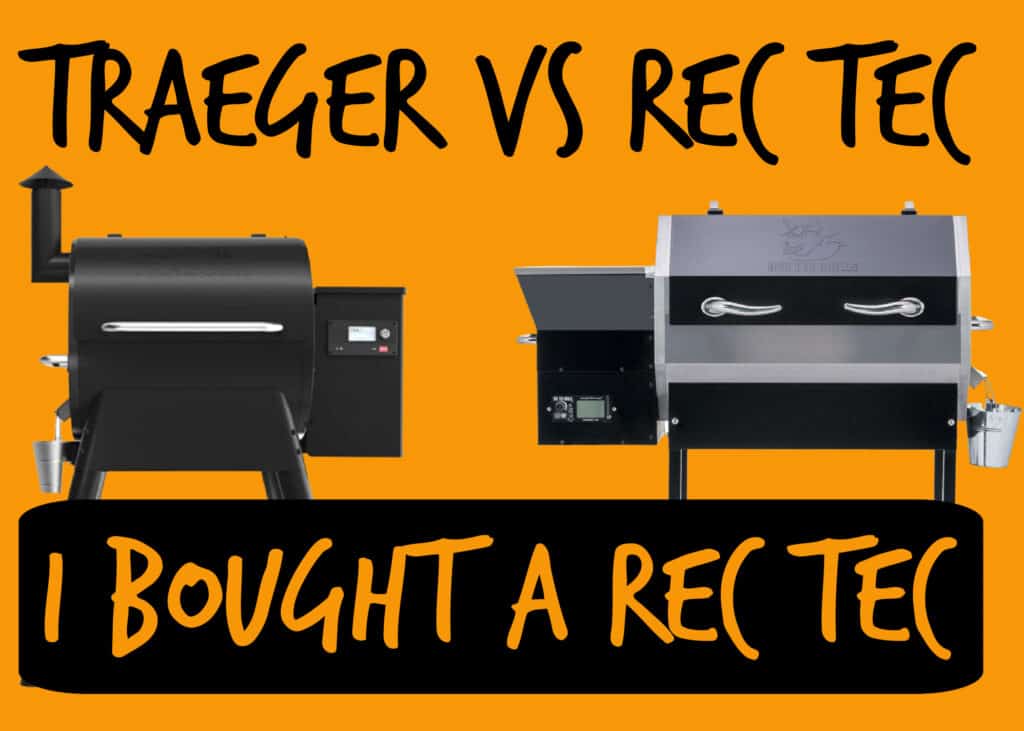 When I was doing my research I was comparing the Rec Tec RT-590 against the Traeger Pro 575 as these two pellet grills have similar size, features and price tags.  Both grills function with nearly identical internal configurations with a fire pot covered by a heat deflector, a solid sloping grease tray and cooking grates.

Neither brand features a sliding mechanism on the grease tray that offers direct flame grilling like on a Pit Boss or Camp Chef pellet grill.

As of the time of this writing the Manufacturers Suggested Retail Prices (MSRP) for these two grills are:

The six areas where I found significant differences between these grills were:

Let’s look at each of these factors in more detail.

The Rec Tec RT-590 provides 590 square inches of grilling surface on the single primary cooking grate.  The Traeger Pro 575 combines a 418 square inch primary grate and a 154 square inch elevated secondary grate to give you 572 square inches.  With the exception of my Oklahoma Joe’s Rider DLX I almost never use the elevated secondary grates on a grill.  Elevated grates get in the way and run at different temperatures than the primary grate.  When I look at grilling area I usually only pay attention to the primary cooking grate as I typically take the elevated grates out.

Another minor difference between the grates is that the Rec Tec uses stainless steel rods for the grate compared to porcelain enameled steel on the Traeger.  Personally I like the looks of stainless steel better but I am not going to claim that there is a major performance difference.

I am going to call a tie between these grills when it comes to the pellet hopper designs as I like each one for a different reason.

I like the Rec Tec pellet hoppers for the simple reason that they hold enough pellets.  The RT-590 holds 30 pounds of pellets compared to an 18 pound capacity on the Traeger Pro 575.  The reason this matters is that most wood pellets are sold in 20 pound bags.  You can dump a full bag of pellets into the Rec Tec but you can’t with the Traeger.  This might seem like a little detail but it is annoying to have to store partial bags of pellets.

I like the Traeger pellet hoppers because they have a magnetic hopper dump mechanism that makes it easy to swap out pellets.  You might want to do a pellet swap if you were burning hickory pellets when you were smoking a brisket but now want to switch over to apple pellets to smoke some baby back ribs.

There is not a pellet dump on the Rec Tec.  I talked to a Rec Tec customer service rep and he said that, if you remove the hand guard, it is pretty easy to scoop the pellets out of the RT-590.  Ehhh…sounds like not much fun to me.

Both companies offer nice warranties and have great customer service.

Traeger offers an industry standard 3 year warranty on all components.

I have no idea why there is such a wide variation in warranty coverage on the Rec Tec grills considering that they use the same components and have equivalent build quality.

These are some factors that have absolutely nothing to do with cooking performance or durability and are completely subjective.

I think the Traeger Pro 575 is a handsome grill that would look just fine sitting on your back deck.

I think the Rec Tec grills look over the top and are just outrageous enough to stand out and grab everyone’s attention. 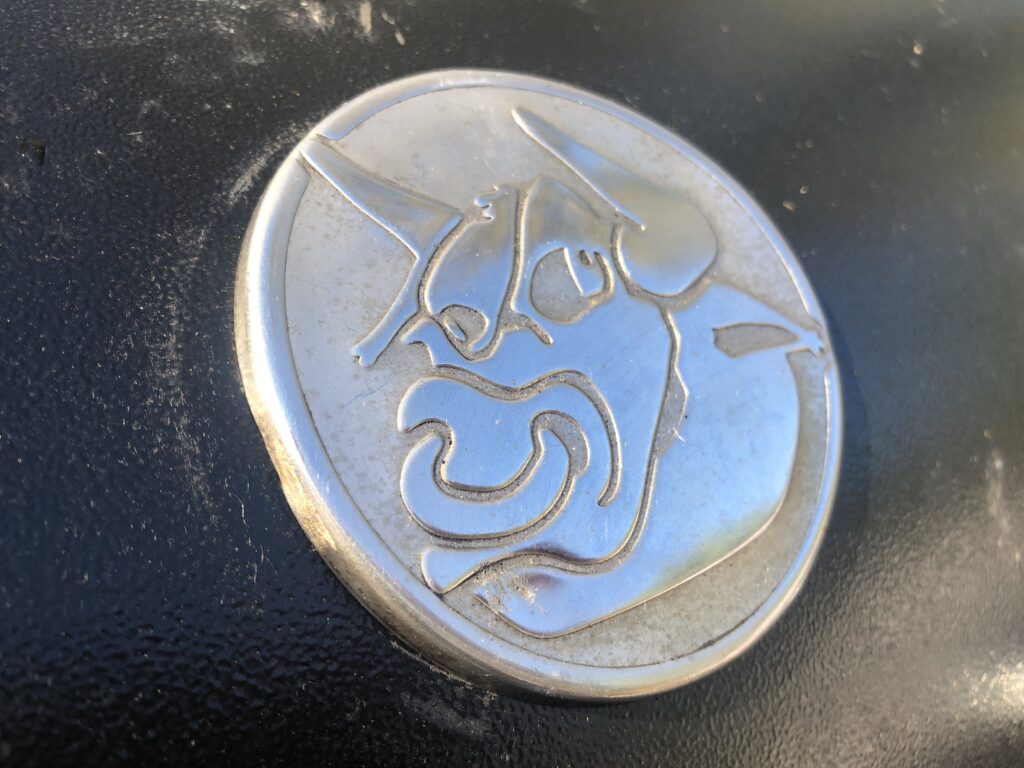 I really like the angry bull on the front badging and am in love with the polished stainless steel horn handles.  The bull theme on these pellet grills reminds me of the bull themed Lamborghinis….over the top outrageous, completely unnecessary and absolutely perfect.

For years Rec Tec had the absolute best control systems but Traeger has finally caught up with its introduction of their D2 drivetrain and WiFire system.  I actually like the Traeger system a little more than Rec Tec’s.

Both grills come with WiFi connectivity and apps that let you monitor the temperature of your meat, control the temperature of the grill, etc from your phone.  Given how often app updates happen and new features get added I think it is pointless to describe the functionality differences or say who has the better app as that could all change tomorrow.

Rec Tec uses a PID controller that is in a smart, constant feedback process loop where it constantly adjusts the auger pellet feed rate and blower fan to dial in an exact temperature setting and hold it with minimal variation.  With a Rec Tec you can set the smoker to 225F and expect your smoker to stay between 220 and 230 F all day long.

Traeger has upgraded their crude controllers to what they are calling a D2 Drivetrain.  What makes the D2 Drivetrain special is that it has been engineered to run on Direct Current (DC) power with brushless motors.  Without getting too deep into the physics of things, most controllers run off of Alternating Current (AC) power in which the current is constantly swapping polarities.  The constant alternation makes AC power “sloppy” and not very useful for precision control.  Direct Current is very clean and you can design equipment where precise control is possible.  The comparison I like to make is that your refrigerator runs on AC while your computer runs on DC.

The D2 Drivetrain has enabled the new Traeger grills to have precision temperature control that is on par with what is obtained with a PID.

The reason I like the Traeger system a little more than Rec Tec is the “pulsing” my Rec Tec does at low temperature settings.  I have talked with other Rec Tec owners and what my grill is doing is absolutely normal.  The pulsing happens when I am running at low temperatures like 225F.  The grill will get to exactly 225F and then will turn the fan off.  When the temperature drops to 224F the fan will turn back on for a few seconds to get the temperature back to 225F.  The cycling “On/Off” of the fan isn’t the most pleasant thing to listen to.

This is the main reason I bought a Rec Tec instead of the Traeger.

One of the biggest problems with cooking on a pellet grill is that you don’t get as much smoke flavor as you do cooking over charcoal and wood.  This problem occurs because the wood pellets burn so cleanly that little smoke is produced.  This problem is even more pronounced in pellet grills that have high precision controls like you get with the RT-590 and Pro 575.

Traeger knows that this is a problem.  Traeger fixed the “no smoke flavor” problem in their high end Ironwood and Timberline grills by using two methods.

The first method was they removed the top mounted smokestack and placed the smoke vents in the back of the grill close to the cooking grate.  This forces what little smoke that is produced to come down and across the meat before exiting instead of up and out through a smokestack.

The second method was that they introduced a Super Smoke Mode into the control system that would run at lower temperatures and produce loads of smoke flavor.

If you want to buy a Traeger grill that puts out great smoke flavor then you will need to spend at least $1,200 for the Traeger Ironwood 650.

By contrast, the RT-590 does have a Extreme Smoke Mode and has rear mounted smoke vents.

I want smoke flavor in my barbecue so I bought a Rec Tec.

Although I did most of my comparisons using the RT-590 as a benchmark the grill I ended up getting was the smaller RT-340.

This is going to be a secondary grill to use if I want to cook steaks for lunch while I am smoking ribs for dinner on my other grill.  I really didn’t need the capacity of the RT-590 and, since my deck is getting full of grills these days, I appreciate the smaller footprint of the RT-340.

I also like that the RT-340 has collapsible legs for easy portability.  I like the idea of having a high performance pellet grill that I can take on the road! 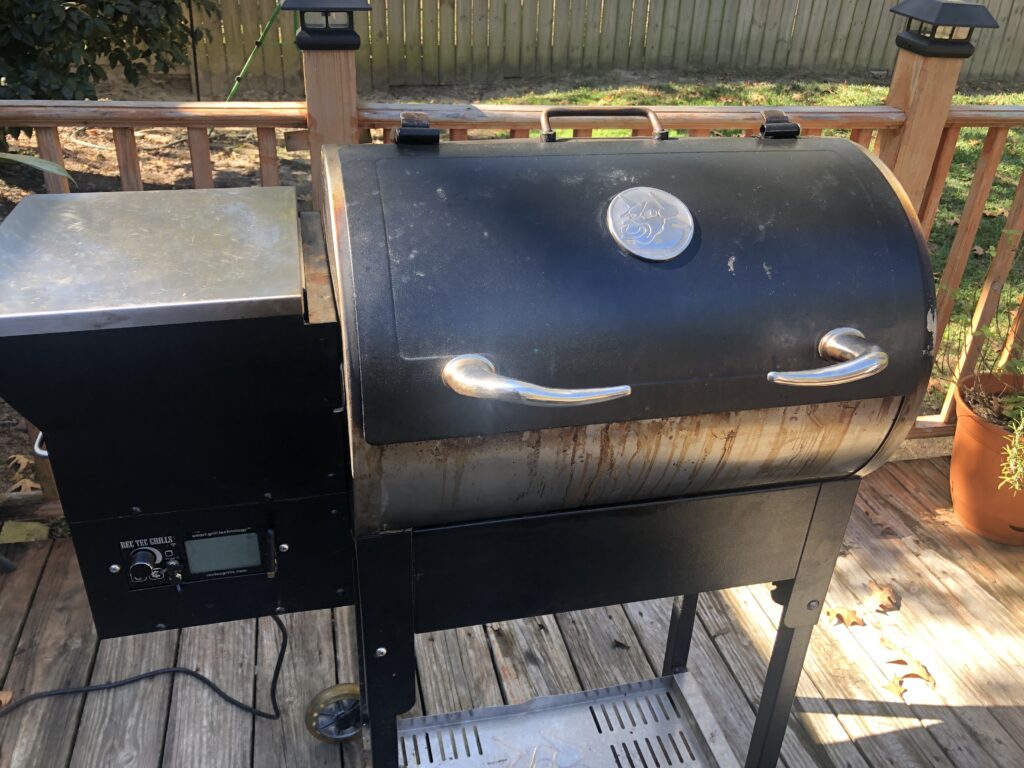 Update: After many months I realize that the RT 340 was not the right grill for me.

What about you?  Do you have any strong opinions or experience in comparing these two brands?  if you do then drop a comment below and help us all learn together!