This is a tough review for me to write.  I bought a Rec Teq RT 340 and after using it for a few months realized that I do not like this pellet grill.  What makes me upset is that I if I had done enough research in advance then I would not have made the purchase in the first place.

Stick with me as I review the RT 340 and you can decide for yourself if this grill is right for you. 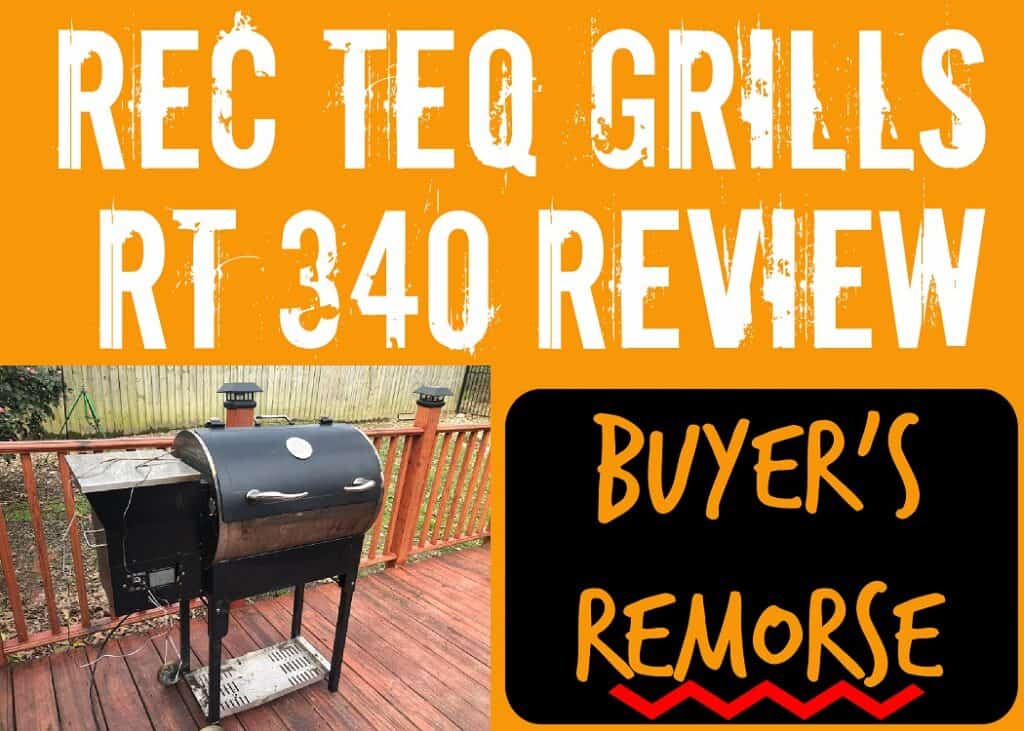 Let me start by saying that I have no animosity towards Rec Teq.  I think they are a fun brand and their grills look amazing.  This grill performed exactly as designed.

My feelings about this grill are nothing that Rec Teq customer service could have done anything about.

Let’s take a look at what you get when you buy an RT 340.  To start off with, you get a sharp looking grill with beautiful badging and those sexy horn handles made of polished stainless steel! 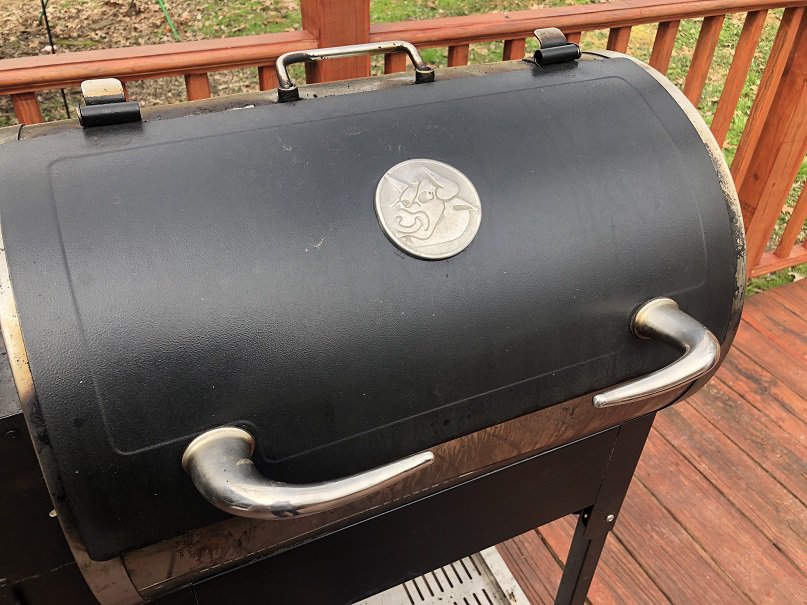 The grill is mostly made in China with some assembly performed in Georgia.  The assembly is extremely solid and I fully expect this grill to last for many years.

The RT 340 is portable and has foldable legs which lets you collapse the grill to a height of 24 inches.  There are handles on both side of the grill for easy lifting but given the 90 pound weight and awkward size you will want to have an extra person help you lift it into the back of your vehicle.

To collapse the grill you need to lay it on its back and remove the bottom tray before folding the legs into a locked position.  A nice touch is that there is a latch on the pellet hopper lid that prevents the pellets from dumping onto your deck as you collapse the grill.

As of February, 2021 the grill is being sold as a combo package that includes 180 pounds of pellets.  The price of the grill without the pellets has historically been about $600.

Other then styling, the key feature of the grill is the PID WiFi enabled controller.  The PID allows for precision temperature control while the WiFi connectivity allows you to monitor and control your grill from anywhere with your phone. 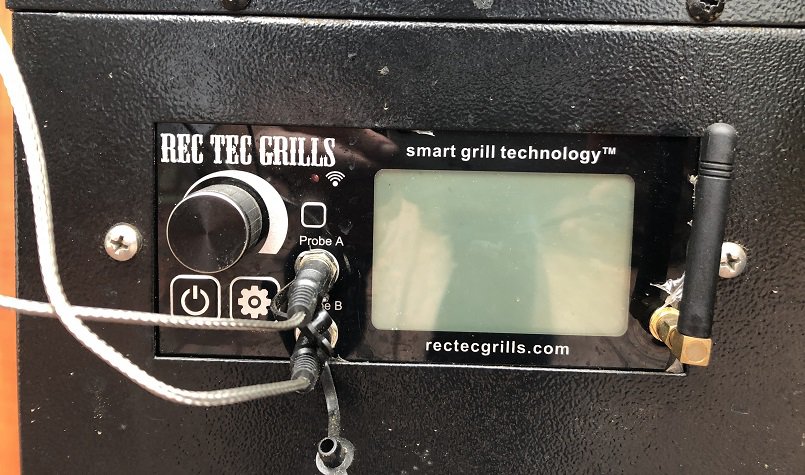 Once the grill is connected to WiFi you can use the app to turn the grill on or off, monitor and adjust the temperature of the grill and keep track of the temperatures being recorded by the two meat probes.  You can even program alerts that let you know when the meat thermometers are approaching target internal temperatures.

You can control the grill without using WiFi but it is a nice feature to have available.

The trick to connecting this grill to your WiFi is to make sure that you are connecting to the 2.4 GHz signal from your router and not the 5.1 GHz signal.  The 5.1Ghz signal is great for rapidly transferring large amounts of data but is typically too weak to pass through exterior walls and reach your grill.  Because of this, manufacturers of WiFi enabled pellet grills use the slower but stronger 2.4 GHz signal for connectivity.

I ran some standard tests to map out the temperature profile, maximum temperature and stability of the grill.

The first test was the “Biscuit Test” where I placed 16 Pillsbury instant biscuits across the surface of the grill which had been preheated to 350F.  I closed the lid and after the biscuits had cooked for 10 minutes flipped them over to map out any hot spots. 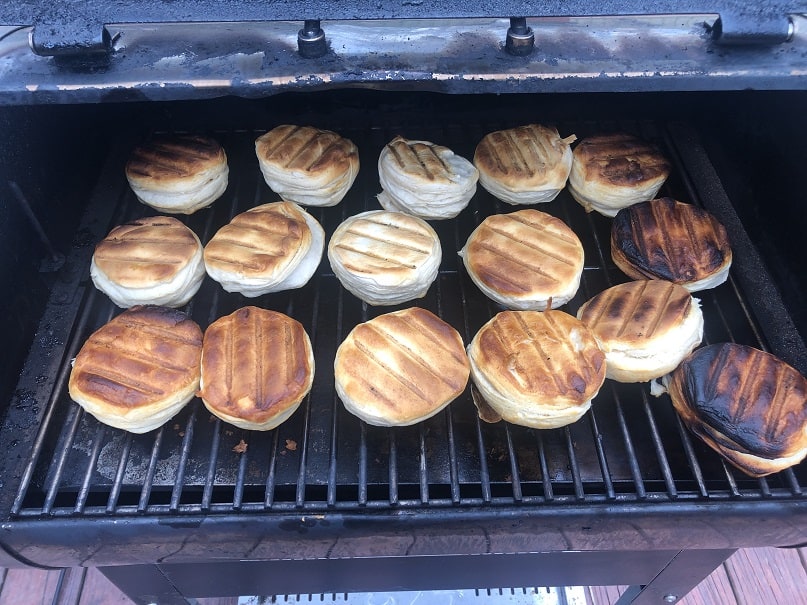 This grill has extremely even temperature distribution. 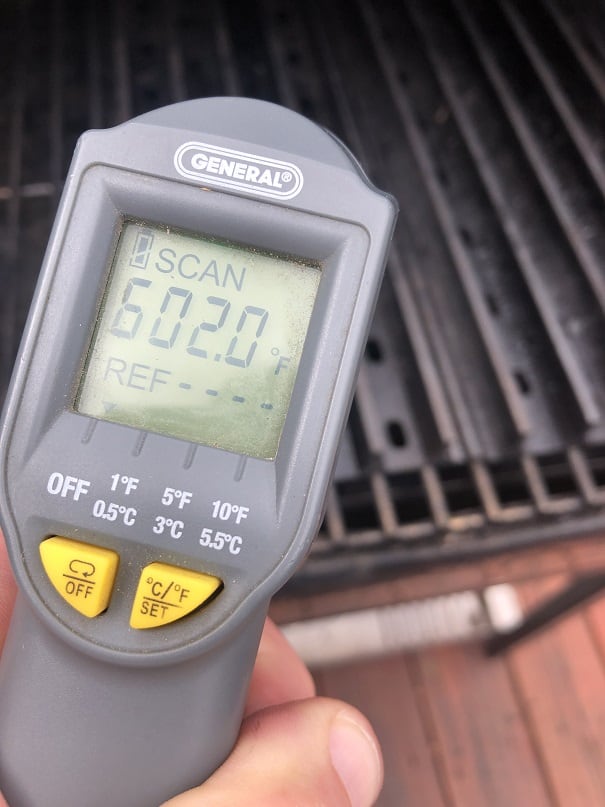 This grill definitely gets hot enough to sear steaks.  I am able to get some amazing grill marks when I use this cooker. 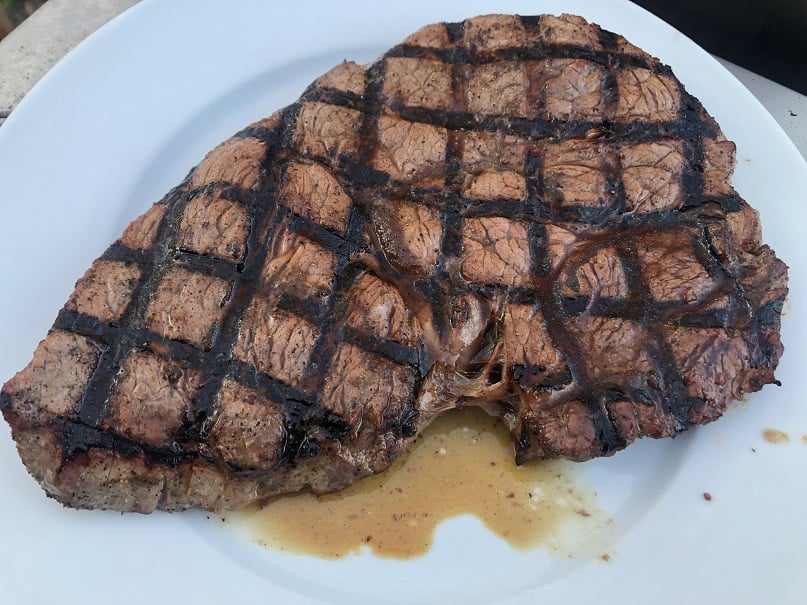 For the last test I used the app to measure the stability of the grill when it had been set to 225F.  In general the temperature was very steady but fluctuations did occur.

The app shows a temperature range of 215-242F.  The app only grabs a data point every minute and missed the true high temperature of 257F. 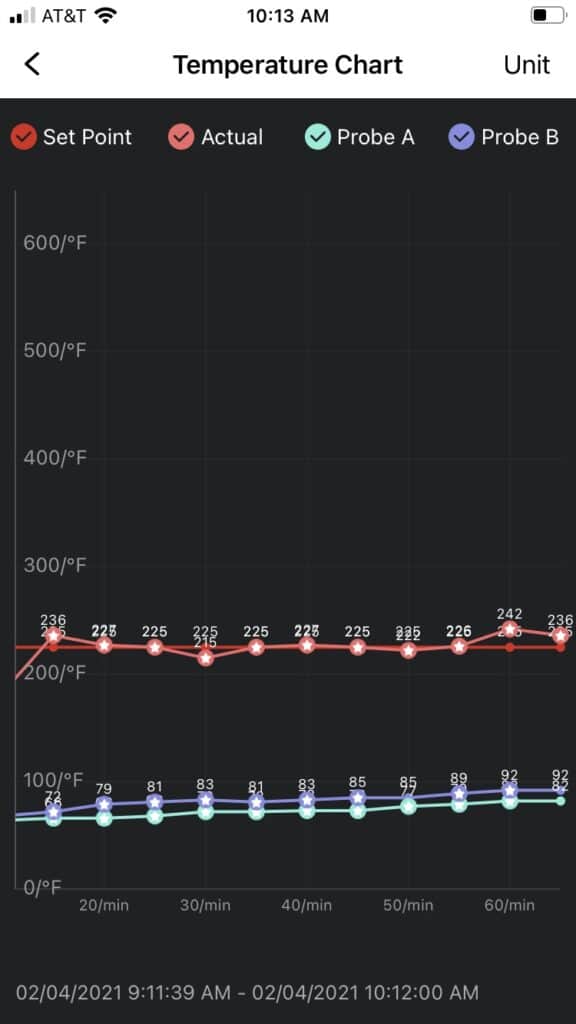 Here is a look at how much room six large chicken quarters take up. 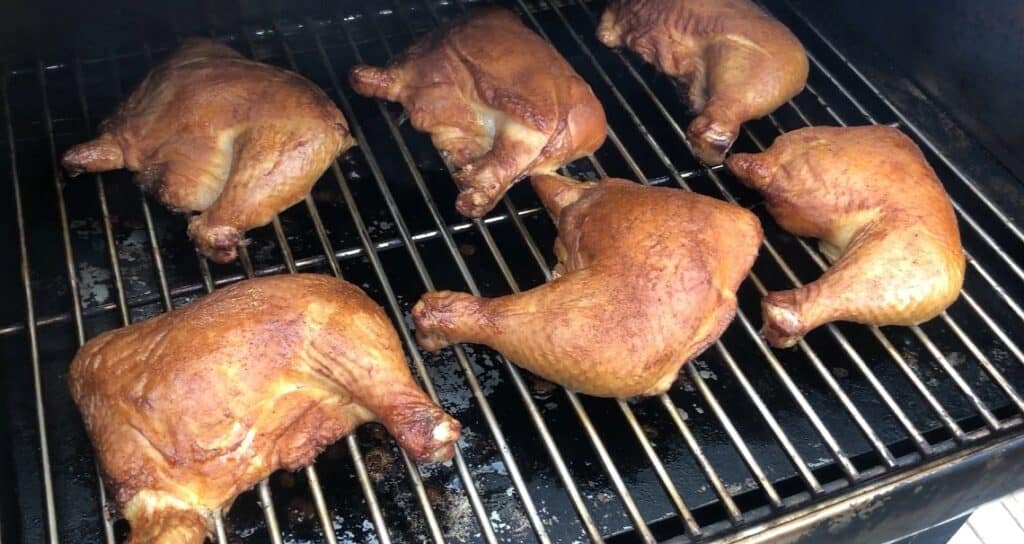 How many racks of ribs you can fit will depend on where you buy your ribs.  I cook the large baby back ribs from Costco and fit two racks on the grate.  If you are buying smaller baby backs (under three pounds) then you can probably get three racks onto the grate without them hanging over the grease tray edges. 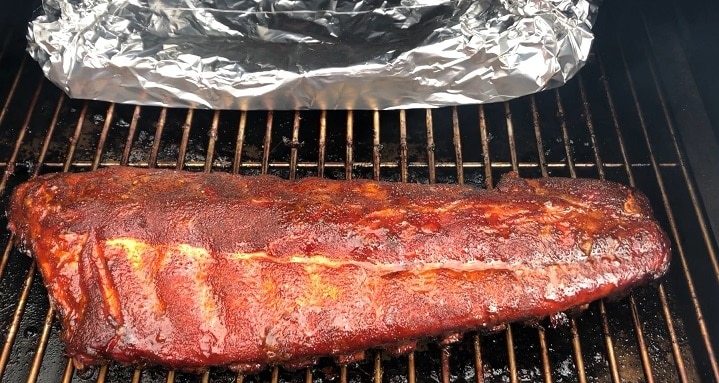 You could easily fit a couple of pork butts or a whole brisket into this cooker.

The only thing to watch out for on a size perspective is that you only have about seven inches of clearance under the lid.  The low clearance means something like a beer can chicken might be a problem if the bird sits up too tall.

I don’t like the RT 340 for a variety of reasons. Many of the reasons will seem trivial and I would gladly ignore them if it wasn’t for the the last reason which is the deal breaker for me.

Let’s start with the small details.

The Small Details That Bug Me

Features: This is an expensive, premium grill and as such I expect it to have premium features.

This grill does not have any tool hooks or a pellet dump on the hopper.  You might not care about a lack of tool hooks but when you have to remove the hand guard and start scooping out pellets by hand you are going to be asking, “How much did I pay for this?”

If you buy the small RT 340 then you get a warranty that is shorter than Traeger, Pit Boss, Camp Chef or Z Grills.

The problem is that the actual cooking grate has dimensions of 19.75 x 15.5 inches and provides 306 square inches of cooking surface.  This is 10% less than advertised.

What is more, you really should only cook directly above the grease tray.  If your meat sits past the edge of the grease tray then it will drip grease into the bottom of the grill and you run the risk of a grease fire.

The grease tray is slightly smaller than the 306 square inch grate which will put your actual working area under 300 square inches. Sure, like I said above, the grill has plenty of space but crediting it with 340 square inches bothers me.

Noise: One of the means the grill uses to maintain a tight temperature range is by controlling the fan that provides combustion air to the fire pot.  What bothers me is that, at low smoking temperatures, the grill will turn the fan off for a while and then kick it back on when needed.

The sound pulses bother me.  This might not be a big deal for you.

Cleaning: You need a Shop Vac to clean the lower portion of the grill.  It is a pain in the butt to haul my Shop Vac from the garage to my back deck and then back to the garage to dump the ashes.

I really wish I had performed research about the Shut Down Cycle on this grill.

All pellet grills have some type of shut down cycle that is intended to make sure all of the pellets in the fire pot are completely burned away before powering down.

On my Z Grills 1000 pellet grill the shut down cycle consists of the fan blowing air into the fire pot for ten minutes before powering off.  This is the same sequence for Traeger pellet grills.

On my Spider Grills pellet adapter the fan blows for fifteen minutes before powering off.

On the RT 340 the shut down cycle consists of the fan blowing for not 15, not 10…but only 5 minutes.  After five minutes the fan turns off, the auger turns on and delivers a big pile of pellets into the fire pot so you will have a quicker start the next time you fire up your grill. 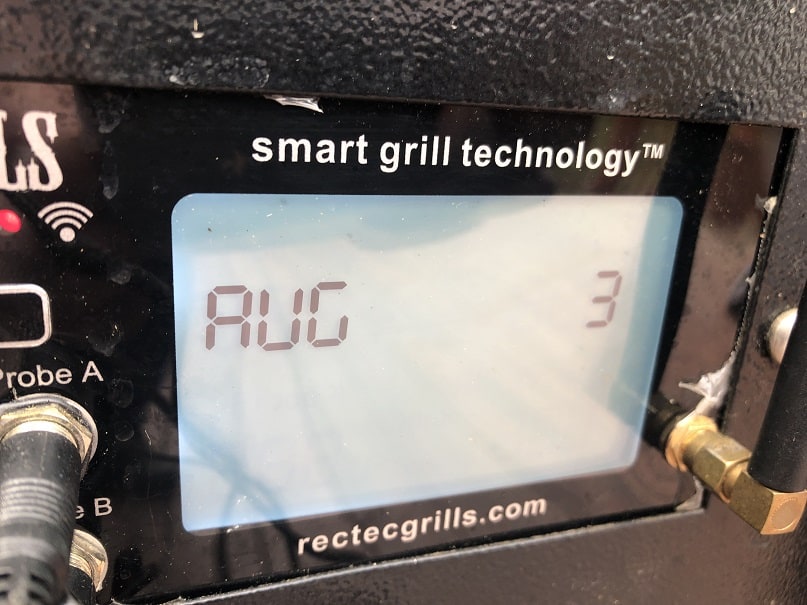 The auger starts turning after 5 minutes of fan blowing.

Here is what the fire pot looks like after the entire shut down cycle is complete. 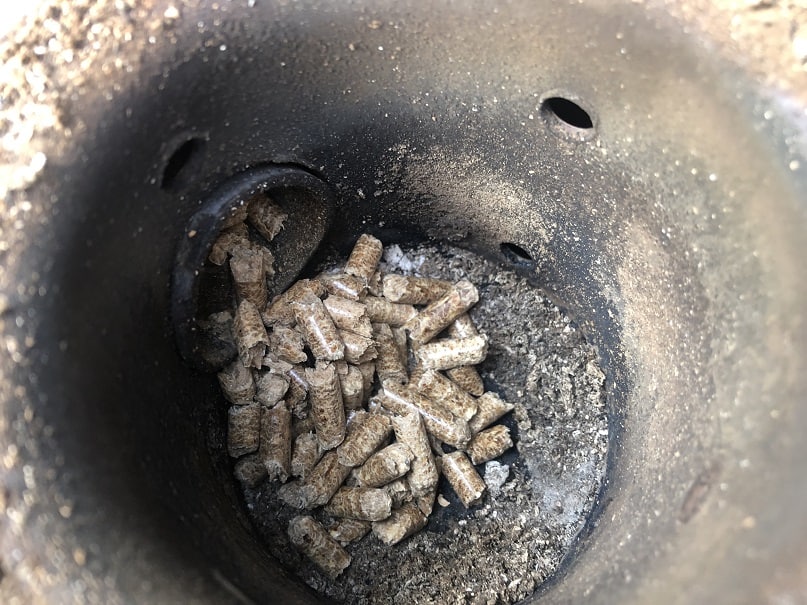 The problem is that, on multiple occasions, the five minute blower activity has not fully burnt the last pellets in the fire pot and the new pellets provided by the auger will ignite.

There have been multiple times that I have used my grill, shut it down and came back 20 minutes later to a smoker that was billowing smoke.  I have even had the fire start going back through the auger after a shut down. 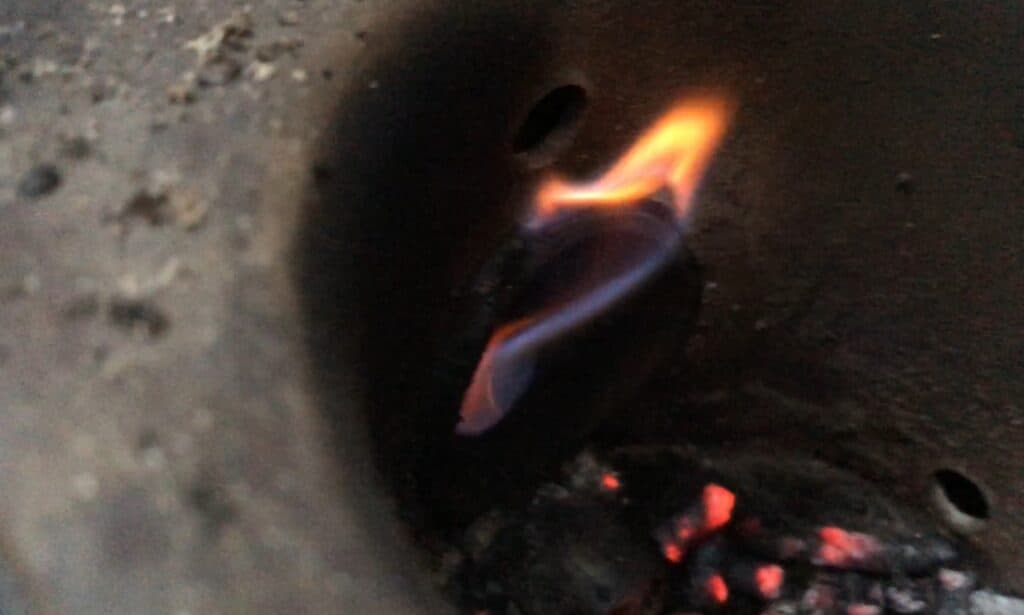 When the fire got to the auger I had smoke coming out of the pellet hopper.  I wanted to make sure that this didn’t turn into a hopper fire so I took out the pellets.

Because there is not a pellet dump.

Once I figured out what was happening I did some searching and found other owners were having the same issue. It sounds like this happens more frequently when the grill has been used for high temperature cooking and there are more pellets left over in the fire pot.

There are work arounds and hacks you can do to fix this problem.

I read about one guy who waits five minutes until the fan is done blowing and then unplugs the grill before the auger can turn on.  I saw that other folks turn the grill to 180F for several minutes before entering the shut down cycle.

Some folks avoid this problem by only using the RT 340 as a Low and Slow smoker and don’t even bother with high temperature grilling.

The thing is, I don’t want to figure out a hack for a premium grill.

Now, every time I finish grilling I sit around and nervously wait for 30 minutes.  When I don’t have the time to baby sit the grill I take out the grate and grease tray and use a spoon to scoop out all of the pellets the auger just dumped in.  It sucks to deal with the hot and greasy metal.

I have stopped using this grill because I do not want to deal with the shut down cycle.

I Should Have Known

I am frustrated with myself for making this purchase and not with Rec Teq.  The grill looks and functions exactly as designed.

Everything that I don’t like about the grill was public knowledge and I just didn’t do my homework.

Update 2022:  A representative from Rec Teq reached out and provided the following explanation of the shut down cycle.

“The 300 sec fan cycle is a standard on all our recteqs as it is plenty of time to cool the recteq which is all it is for. It isn’t to extinguish the fire. The 30 seconds of the auger turning after the fan cuts off is not to prime the pot for the next cook but to ensure that there are no burning pellets inside of the auger tube and thus prevents burn back and a hopper fire. The pellets are going to smolder after the shut down cycle, that is something that is unavoidable which is why in the user manual it states that once the shut down cycle is done it is best to leave the lid closed and give the recteq 10-15 minutes or the fire to completely extinguish. When the recteq is first turned on, that is when it primes the pot. The auger turns for 30 secs at start up putting pellets into the pot before ignition. We have used the same shutdown sequence since the very first recteq we sold and have no issues with how it preforms. I hope this clears things up a bit.”