If you are trying to decide whether to get a ribeye or a porterhouse steak then I suggest going with the ribeye.  While both of these steaks are excellent the ribeye has better flavor, a more consistent texture and is easier to cook.

The only real advantage that a porterhouse has over the ribeye is the size and presentation.  If you are going for a visual “wow” effect then the porterhouse is a consideration.  Of course, there is one special ribeye steak, the Tomahawk, that blows the porterhouse out of the water on all fronts.

Porterhouse vs Ribeye: What Are the Differences?

Below is a picture of a ribeye (on the left) and a porterhouse (on the right) side by side.  Both of the steaks weighed in at just over one pound. 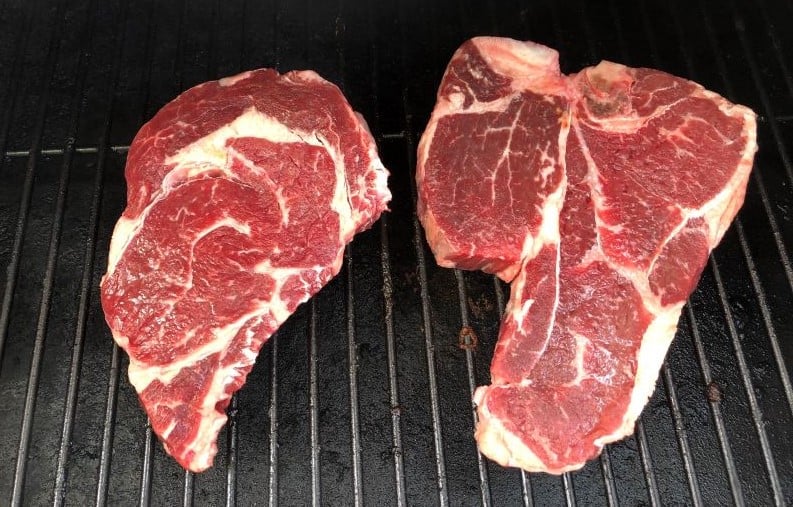 The ribeye comes from the center of the steer in the rib section.

The porterhouse comes from a little further back on the steer in the short loin section.

You can see in the diagram that the Short Loin section also has a portion of the Tenderloin and that is where the porterhouse comes from.

The porterhouse is actually two different cuts of steak, a Strip Loin and a Tenderloin, separated by a bone.  USDA requirements state that in order for a steak to be called a porterhouse the tenderloin section must be at least 1.25 inches wide.  If the tenderloin is between 0.5 and 1.24 inches wide then the steak is called the T Bone steak.

Which Steak is Better?

I will try to take my personal preferences out of the equation and just share a few facts first.

What this means is that one side of the porterhouse is incredibly tender but a little bland while the other side is more flavorful but tougher.

Compare this to a ribeye where the entire steak is tender and delicious and I will take the ribeye over the porterhouse!

The Porterhouse is Harder to Cook

The fact that the porterhouse is composed of two extremely different steaks makes it tricky to get this thing perfectly cooked.  Basically you will have to overcook the tenderloin or undercook the strip loin as the super tender tenderloin cooks quicker than the tougher strip loin.  This isn’t going to be a huge deal but is frustrating for perfectionists 🙂

Another aspect that makes cooking the perfect porterhouse challenging are the bones in the middle of the steak.  Here is how I usually grill a Porterhouse on a charcoal grill.

Sometimes I like to do a reverse sear where I slowly bring the steak up to a target temperature and then sear them in a cast iron pan or on a set of GrillGrate panels.

When I do this with a porterhouse the meat draws back and exposes the bone a little.  The raised bone makes it harder for the meat to come into direct contact with the cast iron skillet and it doesn’t sear as well.  The picture below shows the sear each of the two steaks took on after one minute in a smoking hot cast iron skillet. 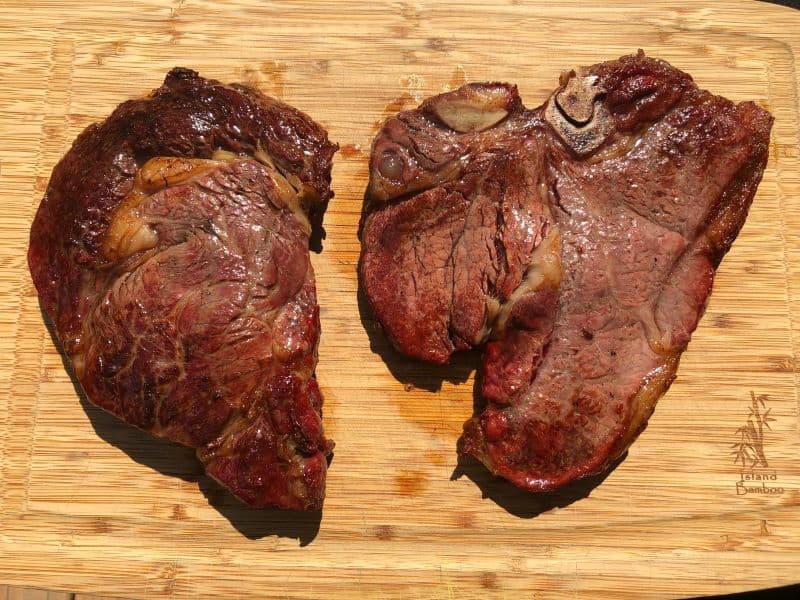 Be Careful Buying a Porterhouse: You Might Get T-Bones!

If you decide to buy some porterhouse steaks to cook at home then you need to pay attention so you don’t get ripped off.

I have bought “Family Packs” of porterhouse steaks at two different grocery stores and fell for a stupid trick on both occasions.

The top steak in the pack was a beautiful porterhouse while every single steak underneath was a freaking T bone.  I don’t know if the folks at the meat department were intentionally ripping me off or if they simply don’t know the difference between a T bone and a porterhouse.

The Porterhouse Has The Size Advantage

You can get either of these steaks at any weight you want but where the porterhouse steals the show is in the width of the steak.  A one pound porterhouse is a much wider steak than a one pound ribeye.

While the width of a steak doesn’t sound important the reality is that we first eat with our eyes and your brain will always register a porterhouse as a bigger steak than a ribeye.

I owed a buddy a steak dinner for helping me with a project.  I fixed a big spread with baked potatoes and a few extra sides.  I handed him a standard dinner plate with a porterhouse steak on it and had fun watching him struggle to fit anything else on the plate.  All he kept saying was, “This steak is huge!”

Bring in the Tomahawk

Of course, there is a particular cut of ribeye steak that shuts this comparison down completely.

A Tomahawk ribeye is a completely over the top monster of a ribeye that is designed to be a stunning visual display. 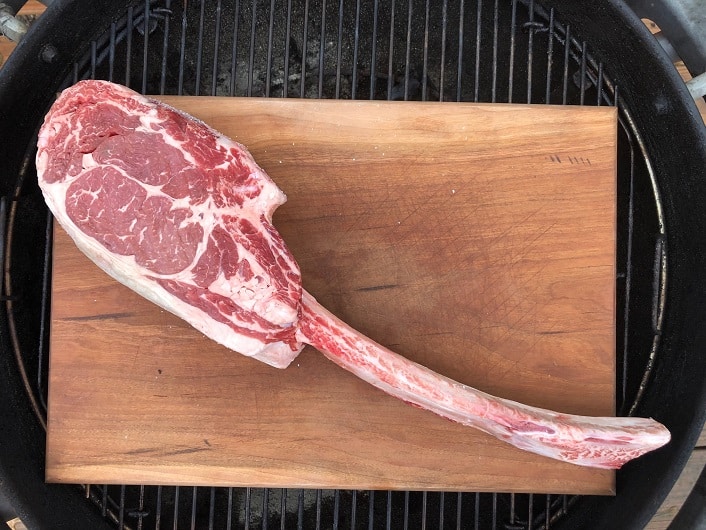 The Tomahawk is almost always overpriced but I don’t care…I love them!

If you want to absolutely stun your guests then forget the porterhouse and buy some Tomahawk ribeyes.

Here is more information on How to Grill a Tomahawk Steak.