If you are in the market for a new charcoal grill, and willing to pay for quality, then a PK Grills has to be on your list.  PK grills can be used as a great charcoal grill for world class steaks and can put out some amazing Low and Slow barbecue when you use them as smokers.

These grills are solidly built, will never rust and are exactly the type of item that gets passed down from father to son.  You will make memories with a PK.

Let’s do a quick review to see what makes the PK grills special.

This article is meant to help you figure out the differences between the different PK charcoal grills.  However, there are a few things I want to mention before we get into this guide just to let you know where I stand with these grills.

What Makes These Grills Special?

PK grills are beautiful, born again pieces of classic Americana.   These grills were originally manufactured in Tyler, Texas between the 1950s and 1960.  In 1960 the company was sold and production moved to Little Rock, Arkansas until the company went out of business in the mid 1970s.  The “PK” in the name stands for “Portable Kitchen”.

Since these grills have a classic look and last forever it is not surprising that they became highly collectible during the 80s and 90s.  One collector loved his grill so much that he bought the rights to the grill and relaunched their production out of Arkansas in 1998. How is that for a loyal fan base?

There are a variety of reasons why these grills have such a loyal fan base and these include:

Let’s look at each aspect in more detail.

The body of PK grills are made of thick, cast aluminum.  This material will not rust…EVER.  There are many PK grills in service today that were manufactured in the 1950s.  These ancient classics have wobbly legs and rusted grates but the cast aluminum bodies are rock solid.

I personally own a PK grill that was made in the 1960s (the monster sized Presidential Model) and love to cook on it.  My PK is almost 60 years old and I believe it will easily last another 20-30 years. 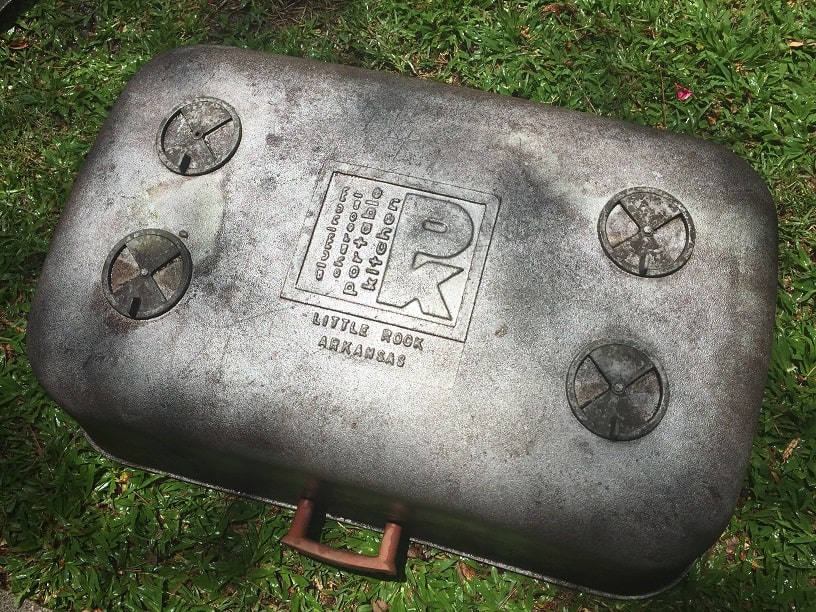 The thickness of the aluminum casting means that these grills are excellent at retaining heat and can hold temperatures better on cold, windy days.

While these grills will not rust it does not mean that they are indestructible. You can damage these grills if you let the burning charcoal touch the sides or bottom of the grill.  You must keep the charcoal on the steel charcoal grate to prevent burn through and pitting.

The current models of PK grills have a four point air control system that lets you dial in exactly how much air gets into the grill and how it circulates inside the grill body.

If you are serious about grilling with charcoal then the ability to control air flow, and consequently the temperature inside your grill, is one of the most important performance factors.

Another benefit of these grills being constructed from cast aluminum is that even though these are thick, heavy duty grills the aluminum is still very light compared to steel.  You can detach the grills from their bases, easily pick them up and put them in the back of a vehicle.

Some of the premier grilling contests are the competitions coordinated by the Steak Cookoff Association (SCA).  At SCA events competitors have three hours to trim, season and grill a ribeye steak with prize money of up to $10,000 on the line.  If you ever go to an SCA event you will see a lot of PK grills in action.  PKs are so popular at SCA events because they are great cookers and it is easy to haul them around.

PK offers two grill models, the Original and the upgraded 360.  In order to appreciate the upgrades on the 360 you first need to understand the problems that they solve.

The Original PK grill is designed to look and function just like the grills made between 1950 and 1975.  It is an amazing cooker and looks beautiful.  While the dedication to the original design is admirable it also means that they have stayed dedicated to all of the design flaws the grill had when it was first introduced almost 70 years ago.

Issues with the Original

While the Original is a wonderful grill there are three issues that you should be aware of.  None of these problems should be considered critical flaws.  Instead think of them as little aggravations that can pile up over time. 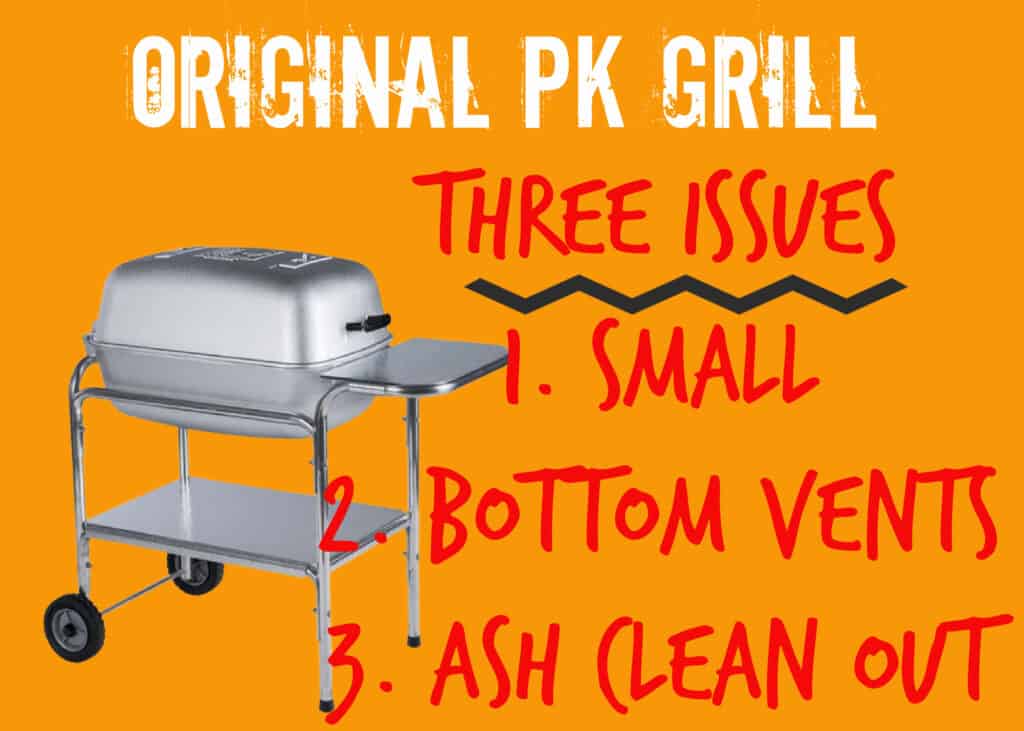 The Original PK is not a small grill but it really isn’t that large either.  The Original has 305 square inches of grilling space which gives it more capacity than an 18.5 inch Weber kettle (240 square inches) but a little less than the 22.5 inch kettle (363 square inches).

You will find ways to make due with the space on the Original but at times you will find yourself wishing it had just a little more. 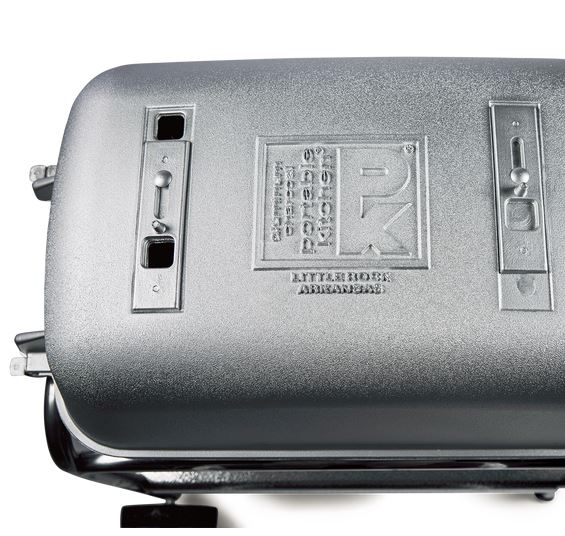 The sliders work GREAT for controlling the air flow and regulating the temperature of the grill.   Typically you will run with either one or both of the top vents completely open and will control the air flow by adjusting the bottom vents.

The issue with the vents is that adjusting the bottom sliders can be a pain once you start grilling.  You have to squat down to get underneath the grill and use a pair of tongs to push/pull the hot metal sliders.

This is not a fatal flaw by any means and some people don’t mind the design.  However, if you are an older guy like me and have bad knees the thought of adjusting the bottom vents is painful.

There is not a simple way to clean the spent ashes out from this grill.  There is no ash removal mechanism and the only holes in the bottom of the grill are the two air inlets.

Some folks use a Shop Vac to get the ashes out of the grill while others use a little shovel.  Personally, I detach the lid from mine, remove the grates, carry the base to the trash can and dump it upside down.  It works but it is awkward.

A lot of folks switch to lump charcoal because the amount of ash that they will have to deal with is greatly reduced compared to Kingsford briquettes.

The PK 360 was designed to fix all of the problems with the Original.

Other upgrades on the 360 include and a highly accurate Tel-Tru lid thermometer, a stainless steel cooking grate and stands about six inches taller.

Here is the full breakdown of the differences between the Original and the 360.

Here is a great video walk through of the PK 360.

I pulled all of the customer reviews for both of these grills from the PK website and from Amazon.  The combined data set (current as of January, 2021) included 873 ratings from real customers.  The reviews for both models are plotted side by side below. 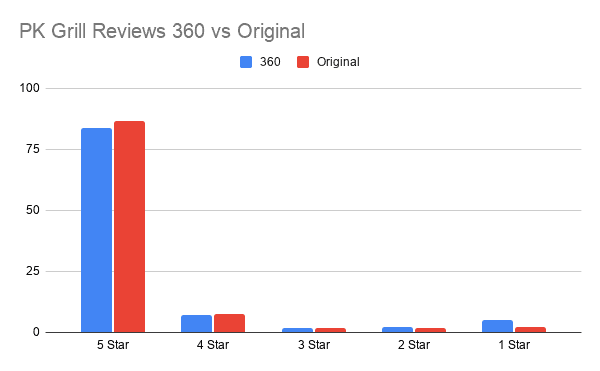 The ratings for the two grills are nearly identical and show that, in general, folks who have bought one typically love the grill.

Other Common Questions About These Grills

When you get on the barbecue forums and Facebook groups you will see that there are a lot of questions about these grills which is understandable as they are a serious investment.  Here are some answers to the most frequently asked questions.

Are PK Grills Made in the USA?

When the PK was brought back to life in 1998 it was a 100% American made product sourced from components in many states.

Today the manufacturing locations of the grill is not obvious.  When this question was asked on the Amazon listing for the Original grill there was an answer posted in 2019 from “Eli B” who said “Made in America” was printed on the outside of the box but some of the smaller boxes that contained parts like the wheels were marked “Made in China”.

PK Grills vs Weber: Which is Better?

You could start a fight with this question 🙂

I own two Weber kettle grills and find myself using them more than my PK.  The biggest reason that I do not use my PK (which has the same base configuration as the Original) as much as my kettles is because of the ash removal.

While the ash clean out was addressed in the design for the 360 it is still a bit of a pain compared to the One Touch system on a Weber kettle.  Here are the steps required to clean out the ashes for the two grills.

PK Grills claims that their grills are better than a standard kettle because they have four air vents instead of two.  More air vents results in more precise air flow and temperature regulation.

The warranty on the grill body is better for a PK than Weber (20 vs 10 years).

One serious advantage that comes with owning a Weber kettle is the huge array of accessories that are available.  You can get a rotisserie, a Slow n Sear, a Spider pellet adapter, and a ton of other accessories.  I love playing with new toys and there are so many more available for Weber kettles.

I do not have a strong case to say that one of these grills is better than the other but my personal preference is towards Weber.

Are They Worth the Money?

The pricing of the PK grills makes this a tough question to answer.

The Original has an MSRP of $369 which makes it a little less expensive than a Weber Performer Premium ($399).  The Performer is an outstanding grill and given that the Weber vs PK battle is such a close call then I think it is fair to say that the Original PK is absolutely worth the money.

The 360 PK has an MSRP of $799 and that is problematic. When the 360 was first being marketed, PK justified its price by comparing it against the price of a Big Green Egg.  To me it does not make sense to compare the Original to a Weber Performer and the 360 to a kamado style cooker.  The performance characteristics of the 360 are nothing like an Egg.

The 360 costs twice as much as an Original but is neither twice as large or twice as good.  The 360 also costs $300 more than the fully tricked out Weber Performer Deluxe that has a built in propane ignition system for lighting your charcoal.

The reasons to buy a 360 are for the look and because you want the best that PK has to offer.  You will not be doing it because it is a great value.