I bought the Pit Boss two burner tabletop griddle a few months ago and cooking on it has been a lot of fun.  I wanted to share my review of this griddle and cover some important aspects such as propane usage, physical dimensions and performance. 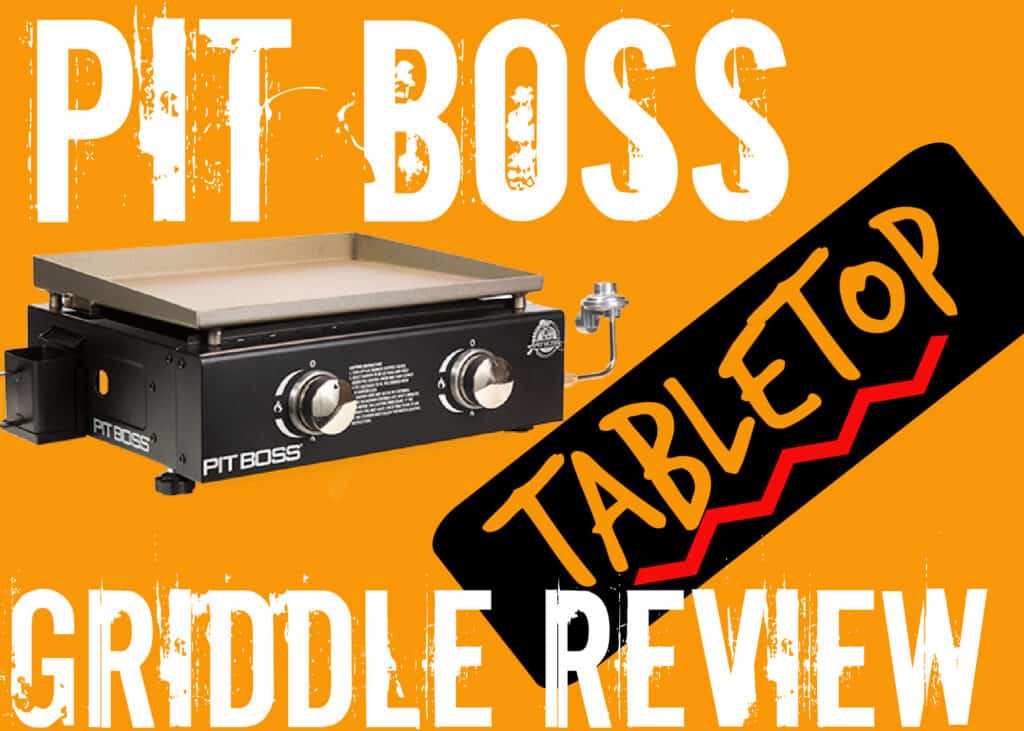 Please Note:  I want you to have the best, most unbiased information possible.  To make sure that you can trust this review you need to know:

Pit Boss currently makes three tabletop griddles and, before we jump into the full review of the one that I am using, I am going to walk you through the differences of the three models so you can decide which one is right for you.

Three Models of the Tabletop Griddle

There are currently three versions of the tabletop griddle and there are some significant differences between them both in terms of features and price.

All models come with a five year warranty.

Let’s look at which one might be better for you.

One and Two Burner Griddles

The One and Two Burner griddles are identical with the exception of the burner tube configuration.  The one burner griddle has an “H” shaped burner while the two burner griddle has two linear burners.  The difference in burner configurations has the possibility to introduce different heat distribution patterns on the griddles but given how small the actual cooking surface is I do not expect this to be significant.

I prefer the two burner over the one burner for a couple of reasons.

The first reason I like the two burner model better is that you can set up dual temperature zones.  You can have the left side of the griddle turned up to High while you are cooking a couple of smashburgers and have the right side set to Low for toasting the burger buns.

The second reason I like the two burner model better is that you can get more mileage from your tank of propane.  The burners on both of these griddles are rated for a total heat output of 18,000 BTU/hr.  If you just want to cook a couple of ribeye steaks on the one burner griddle then you need to turn the dial to High and use the full 18,000 BTU/hr.  The problem is that you do not need the entire griddle surface to be hot in order to cook two steaks and you end up wasting propane.  With the two burner griddle you can turn a single burner to High, and only use 9,000 BTU/hr, and cook the steaks on one side of the griddle.

The efficient use of propane might not seem like a big deal but when you are fueling the griddle with a one pound propane bottle the issue is huge.

Prices change all of the time but, in general, these griddles cost under $100 with the single burner typically cost about $15 less than the dual burner.  The price difference between these products is almost negligible so I went with the two burner model.

The Sportsman is designed to be highly portable as demonstrated by the locking lid and side handles.  Placing the handles on the side of the Sportsman meant the grease tray had to be relocated to the front of the griddle.  Personally I prefer the front mounted grease drain.

The Sportsman has two semi-circular horseshoe burners which, in theory, ought to provide better heat distribution than the linear burners on the standard two burner griddle.

Overall I think the Sportsman will probably the a better griddle.  The reason I didn’t buy a Sportsman is that the portability is not a feature that I personally need and the $199 Sportsman currently costs TWICE as much as the standard two burner griddle.

There are all sorts of different reasons for buying small griddles like this and for some people it is so they can have a portable cooker for their RV or camper.  When I research these products I always see a lot of questions about physical dimensions so I figured I would drop those here for your convenience.

I do not have measurements for the Sportsman.

The bottom line is that this griddle is fun as heck to use!

Here is a look at some biscuits I burnt while trying to do a heat distribution test that should give you an idea about the cool area on the griddle as well as how large the griddle is. 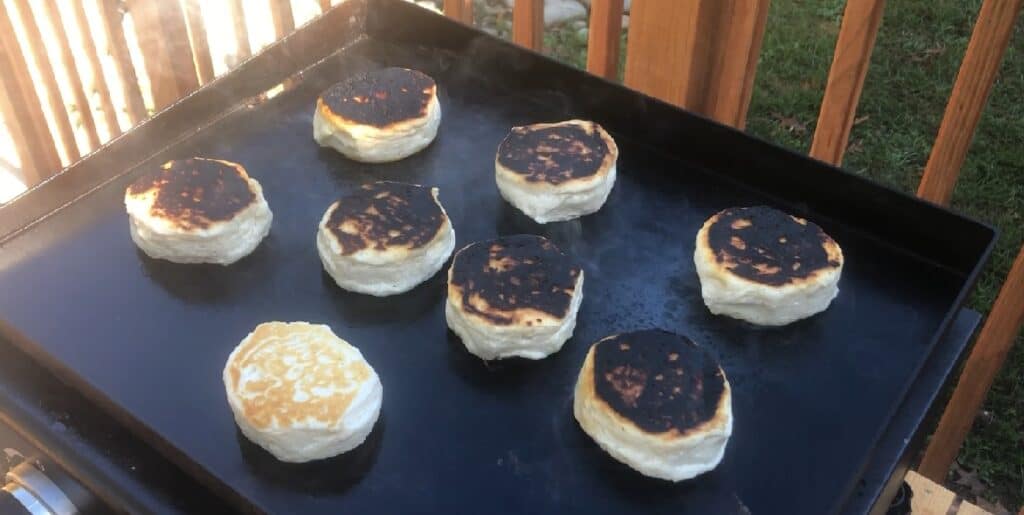 The cool front is not necessarily a bad thing as it provides a nice holding area that can keep finished foods warm.

This cool zone exists because the burner tubes do not have any flame ports in this area.

Overall I am a big fan of this griddle but I do want to share a couple of things that I am not crazy about.

This griddle burns through a one pound bottle of propane really fast.  The propane usage is large enough that it really makes me aware of my cooking style.  Should I be cooking on Medium instead of High?  Do I really need both burners?

There are 21.591 BTUs in a pound of propane which means when both burners are on high and consuming 18,000 BTUs per hour you only get 1.2 hours per bottle of propane.  Remember though, this 1.2 hours is not pure cooking time as you have to figure in how long it takes the griddle to heat up as well as the cleanup at the end of the cook.

I have consistently been getting about three cooks per one pound bottle of propane.

It sucks to run out of propane mid cook and I am embarrassed by the pile of empty propane bottles I have stacked up.  You can’t recycle those bottles and you are not supposed to throw them in the trash.  Around here they need to be taken to the Hazardous Waste collection day our city has twice a year.

On one hand you could say that this is simply a problem inherent to tabletop griddles and grills.  However, other manufacturers of small griddles have adapters that allow you to hook your griddle up to a standard 20 pound propane tank.  Pit Boss does not have an adapter for their tabletop griddle and could not recommend any third party adapter when I enquired.

I am exploring third party adapters and will update this review when I find one that works.

The real issue that bothers me about the grease drainage system is that while grease flows into the external bucket exactly as designed, grill crud gets stuck in the narrow opening and is difficult to dislodge.

The space where all this crud collects is too narrow for me to reach with either my spatula or the putty knife I use to clean my griddle.  I usually end up using a bamboo skewer to reach in and knock things loose but it is a bit of a pain to deal with.

Again, this is not a major issue but is something that bugs me.

Comparisons to Other Tabletop Griddles

There are several other manufacturers of tabletop griddles including Blackstone, Blue Rhino, Char Griller and Royal Gourmet.  I will be testing each of these brands in the coming months and will post those reviews as well as a head to head comparison as they are competed.

Overall I have had a lot of fun with the griddle and am pleased with the purchase.