Let’s take a look at some of the specifications and features of this grill to see if it is right for you. 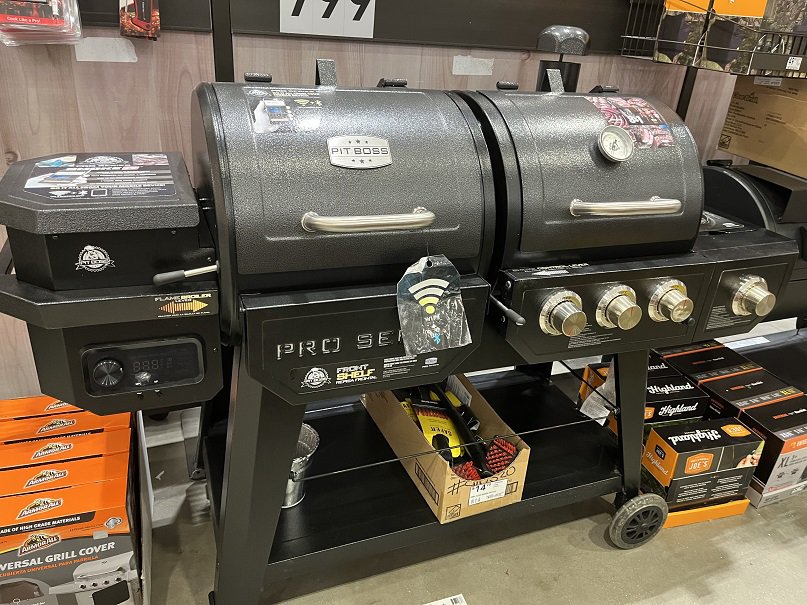 Combo grills are great options for people who want the flexibility to do slow cooking with wood smoke and be able to do some quick grilling over an open flame.

Here is a promotional video for the earlier version of this grill (Pro 1100) from Pit Boss.  The only meaningful difference between the older model and the current model is the upgraded controller on the pellet grill side (we will cover that in more detail below).

The cooking area on the Combo grill is equally distributed between the pellet and gas fired chambers.

While the 1,230 total square inches of grilling space sounds like a massive grill, the fact that it is broken into so many sections makes the effective grilling area much smaller. 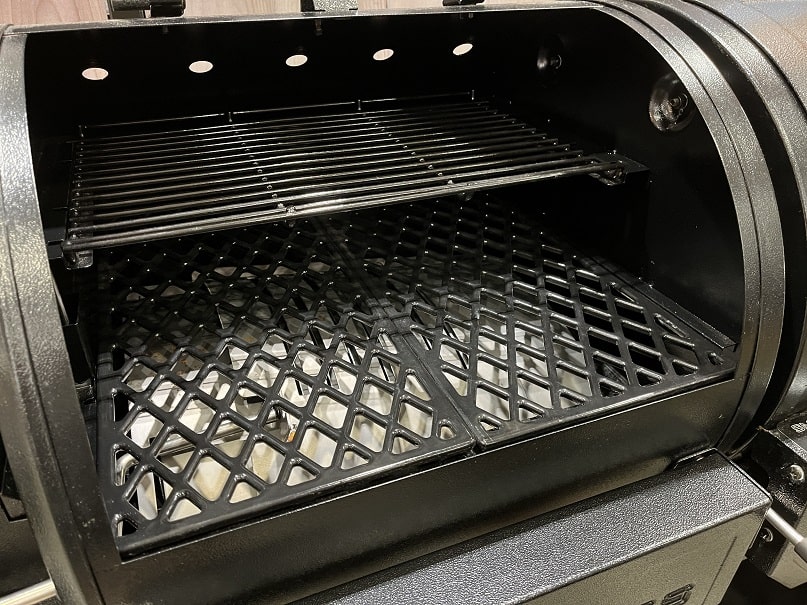 For example, on the pellet grill side of the smoker you can fit two slabs of baby back ribs on the primary grate and a third slab on the secondary elevated grate.  While the capacity to smoke three slabs of baby backs is perfectly fine for most people it is less than one would intuitively expect from a grill with 1,230 square inches of cooking space.

The temperature control for the pellet side of the grill has been updated to a PID system with WiFi and Bluetooth connectivity.

The PID controller is a mixed blessing.  PIDs are great for maintaining a steady temperature but, because they are so steady and clean, are notorious for producing low levels of smoke flavor.  This is common across all brands of grills with PID controllers and is not a “Pit Boss Issue”. 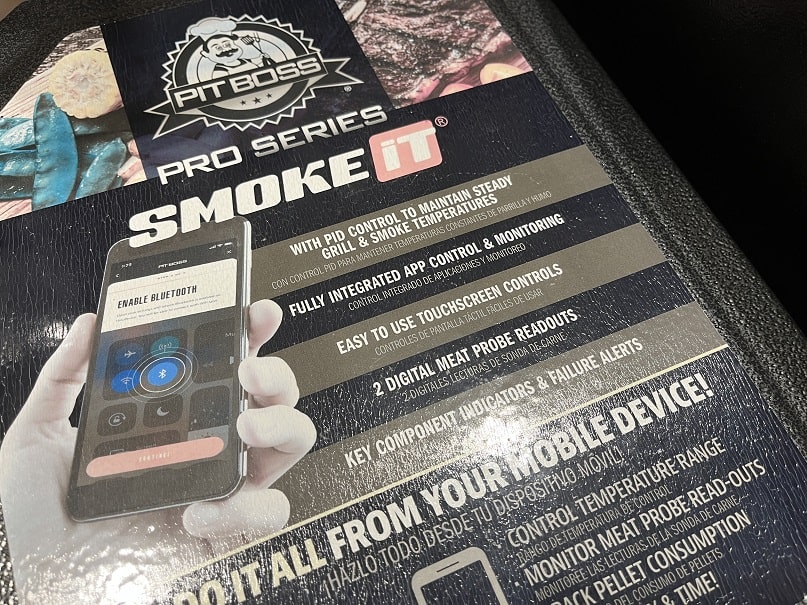 The reviews on the WiFi/Bluetooth connectivity and the associated SmokeIt app are mixed.  The early reviews for the system, when it came out around 2020, were pretty bad.  However, this is really just a software issue and it sounds like major upgrades were made in subsequent updates.

The temperature control on the gas fired side of the grill is manually controlled through the burner knobs for the three independent propane fired burners.  Each burner is rated for 12,000 BTU/hr for a combined heat output of 36,000 BTU/hr.  This heat is spread across 352 square inches on the primary cooking grate for a specific heating value of 102 BTU/hr per square inch.  That is a seriously hot grill!

The Combo has a pellet hopper with a 22 pound capacity.  I like the size of this hopper because when you get down to just a pound or two of pellets then you can dump the full contents of a 20 pound bag of pellets into the hopper.

Each cooking chamber has its own grease management system.  The pellet grill drains into a drip bucket underneath the grill while the gas fired side of the grill has a removable grease try that slides out from the side of the grill.

There is no advanced ash management system for this Combo grill so you will need to use a Shop Vac to clean out the fire pot and the body of the chamber after every few uses.

The grill comes with two stainless steel meat probe thermometers that plug into the control panel so you can monitor the internal temperature of what you are smoking.  I do not believe the leads are long enough to use on the gas grill side of the Combo.

There is an adjustable Smoke Control Lever between the pellet side and gas side of the grill which lets you add smoke flavor to the gas side while you are grilling. I suspect with a little creativity you could also use this arrangement to do some cold smoking. 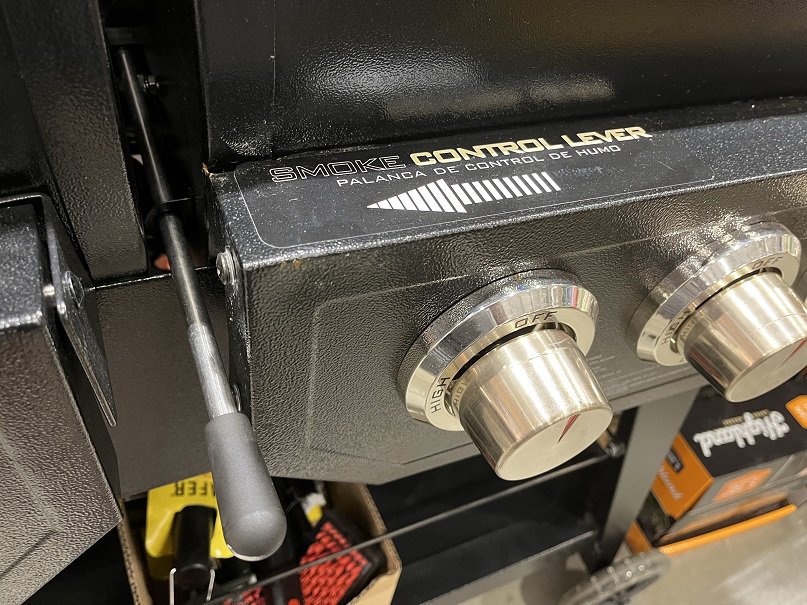 The pellet grill side of the Combo has a slidable heat shield that allows you to directly grill your food over an open wood fire if desired.

The Pro Series 1100 Combo is backed by a five year warranty on all components.

The Pro Series 1100 Combo is a Lowes exclusive product and currently retails for $799.

I searched the web for the best reviews that I could find and broke them out into two categories.  The first category is the 5 through 1 star reviews provided by people who have purchased the grill and the second category are the video reviews on YouTube.

I compiled all of the reviews left for this grill from the Lowes website. 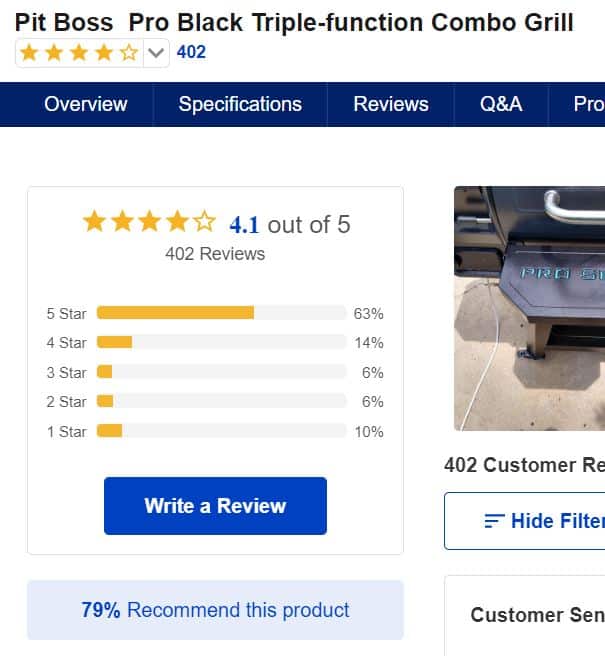 This grill has over 400 reviews available which I consider to be a large enough data set to be reliable.

The grill has received 63% 5 star and 14% 4 star reviews which combine to give a Customer Satisfaction Rating of 77% which is pretty standard for Pit Boss products.  On the flip side, when you combine the 1 and 2 star reviews you find that 16% of people hate the grill.

The biggest complaints about the grill fell into three main categories:

Some of the representative negative reviews are posted below.

Absolute junk. Bought this grill 2 years ago (seems to have changed slightly). The gas side started giving problems after about a year and then stopped working. Kept using the pellet side until the auger quit this week. The metal is burning through and really all the internal parts are falling apart. Can’t believe I paid this much and it only lasted 2 years.

This grill has now broken 3 times in the past 6 months and is not even a full year old. I’ve had to do multiple repairs myself, all a waste of time because of this sub par product.

Should You Buy the Pit Boss Combo Grill?

This is not a grill that I would consider purchasing.

The grill looks great and the idea of a combo grill is seductive.

The reality is that if you buy this grill then you will spend a LOT of money to get a small pellet grill that is okay and a small gas grill that is subpar.

I think you would be much happier if you bought a mid sized Pit Boss like the Classic or 700FB1 for smoking and then got a nice gas grill like a Weber Q or Traveler.  The total cost would be the about the same and you would have a much nicer setup.