Pit Boss has introduced several new PID controlled pellet grills and it has created confusion as to what the differences are between the models and which one is the best.  There are two grills in particular, the Pit Boss Platinum Laredo 1000 and the Pro Series 850, that appear to be nearly identical in price and features.

Let me walk you through the upgrades and key differences on these grills and why, if I was buying a new Pit Boss, I would purchase the Laredo. 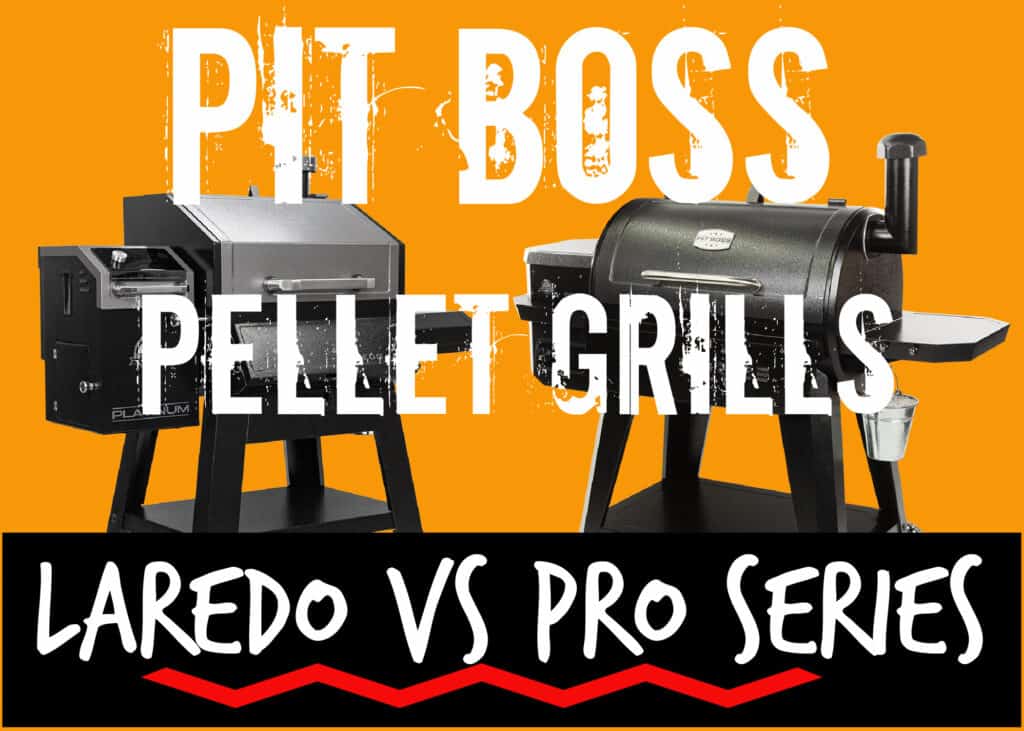 The Pit Boss Platinum Laredo 1000 comes in one size while the new Pro Series grills come in two sizes, the full size Pro 850 and the oversized Pro 1150.  Here are the stats on how all three grills stack up against each other.

From a price standpoint, as well as the size of the primary cooking grate, I think the Platinum Laredo 1000 should be directly compared against the Pro 850 model.

Both of the Pro and Laredo grills are updates over previous generations like the Austin XL for several reasons.

The standard Pit Boss controller that comes with grills like the Austin XL were good enough to get you in the right ballpark as far as temperature is concerned.  If you set your grill to 250F with a standard controller then the temperature will typically swing between 235-270F during the cook.  Your average temperature will be very close to what you dialed in but the variance can be large.

A PID controller uses smarter logic and better feedback to control temperatures.  Every pellet grill that I have used that had a PID was able to achieve a target temperature and hold it within +/- 5 degrees.  If you set wither the Laredo or Pro to 250F then you should expect it to have a swing between 245-255F.  As far as temperature control is concerned this is a massive upgrade.

I love the idea of being able to check the internal temperature of my steaks without having to get up and walk outside.  The ability to change the temperature on your grill remotely is also very cool!

That being said, I can’t decide if being able to connect you grill to your phone via WiFi is a brilliant idea or an abomination.  Lord knows that getting up and doing more walking is something I need to do and I sure as heck do not need another excuse to stare at my phone.

One of the selling points for Pit Boss pellet grills has always been the ability to slide the heat shield to one side and get access to direct flame grilling over the wood pellets that are burning in the fire pot.  The problem with this direct flame grilling has been that to move the heat shield you first had to remove the cooking grate and then use a pair of tongs to move the shield.  It worked but was a hassle.

On one of the first generation Pro series grill, the Pro 1100, Pit Boss added a lever located outside the grill body that would move the shield for you.  This lever worked great but was in an awkward location on the right side of the grill underneath the side table.

Pit Boss has finally gotten the design right and have placed an easy to use lever on the top left of the grill where it is easy to reach and manipulate.  The lever location is in pretty much the same location for both the Laredo and Pro Series grills.

Drawbacks to Both Grills

These grills are not perfect and there are four main things you ought to know before you buy either one.

The design feature of Pit Boss pellet grills that allows direct flame grilling is a double edged sword.  In order to provide you with direct flame access there is not a heat distribution shield above the fire pot.  The lack of a heat distribution shield creates a significant hotspot directly over the fire pot and a very uneven cooking environment.

The hotspot can be managed in a couple of ways.  You can be aware of the issue and keep moving your food around during he cook or you can do some simple modifications at the grease tray levels to mitigate the issue.  Here is a great video that walks you through the hotspot issues and what simple modifications you can make to improve the heat distribution in a Pit Boss pellet grill.

The app and associated WiFi/Bluetooth connectivity have disappointed a lot of people.  The issues with the app are plentiful.

The biggest complaint I have seen is that despite the transition to a digital platform the grills are still limited to the same temperature settings as are on the standard controllers.

There is a large disconnect between what Pit Boss says the controller can do and what actually happens in the real world.  You cannot make 5 degree adjustments and you still cannot set the grill to 275F.  The customer review below summarizes the issue well. 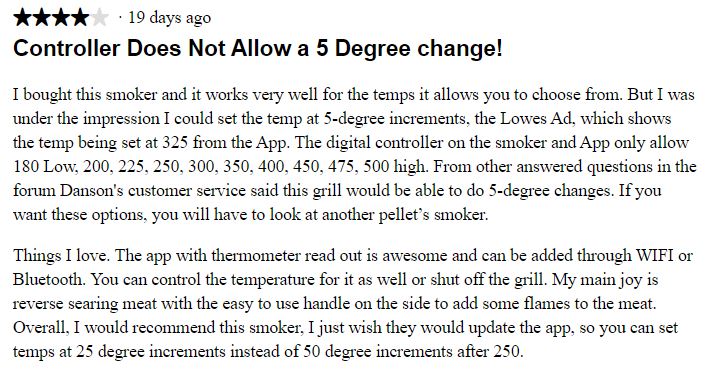 Other people have complained about the limited functionality  within the app as well as non-working features such as the “Recipe” function.  A larger issue appears to be the role of WiFi vs Bluetooth.  It looks like the WiFi is only used to update the firmware on the controller and is not used for connectivity with your phone.

You are able to control and monitor your grill with the Bluetooth connectivity which is nice but limits your range.  Here is a great video that demonstrates many of the current issues with the app.

This falls into the camp of it is impossible to make everyone happy.  People love PID controllers because of the tight, precise control over temperatures. If you set these grills to 250F then they are going to stay at 250F.

The downside is that because PID controllers are so precise they burn pellets cleanly and don’t produce as much smoke as a standard “sloppy” controller.  A standard complaint about pellet grills with PID controllers is that the meat tastes like it was cooked in an oven.  Some manufacturers build in features like a Super Smoke Mode into their controllers to combat this issue but I am not aware of such a feature on the Pit Boss design.

You can get more smoke flavor with these grills by running them at the lowest temperature setting for the first couple hours of smoking or by using a supplemental smoke tube.

Unfortunately, both of these grills have very mediocre customer reviews.

Below is a snapshot of the customer reviews for the Pro 850 from Lowes website.  When you combine the 1 and 2 Star reviews you find that 16% of owners hate their grill.  Further, when you look at the positive reviews you see that only 75% of customers would recommend this grill to a friend. 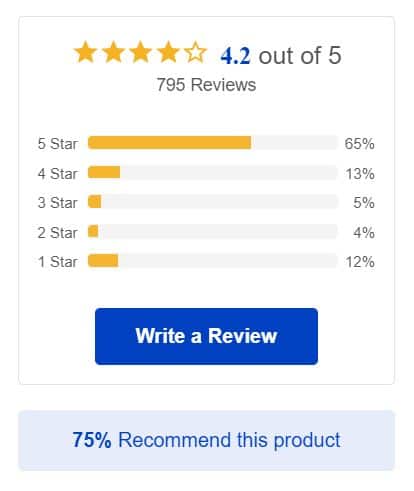 When you combine the 1 and 2 Star reviews you find that 23% of owners hate their grill.  Oof.

The complaints about these grills are pretty similar.  Build quality is low, the app doesn’t work, no smoke flavor, etc.

Major Differences Between the Pit Boss Laredo 1000 and Pro 850

Both of these grills are affordable alternatives to a Traeger but I don’t think that I would buy either model. If you are looking for a budget friendly pellet grill then I suggest checking out my Z Grills Review.

If I had to choose between these two models then I would absolutely purchase the Laredo instead of the Pro 850. 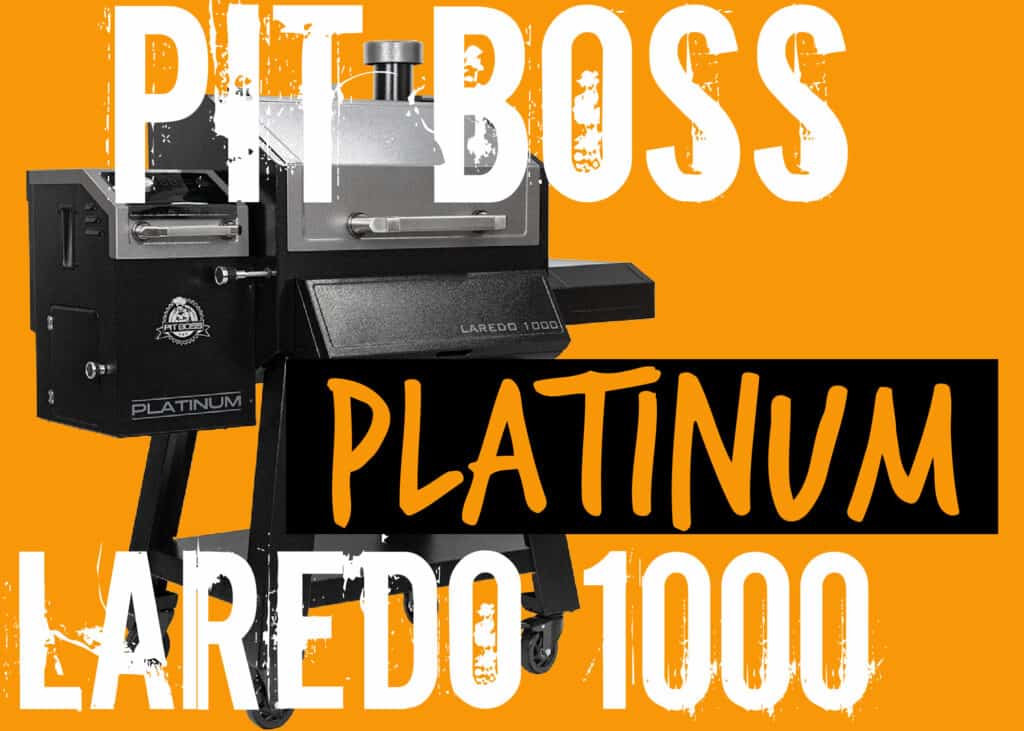 There are several small reasons and two large reasons why I prefer the Platinum Laredo 1000.

The small reasons are that the Laredo has more grilling space from to the secondary grates, comes with an extra meat probe, has a larger pellet hopper and even has a built in grill light for night time grilling.  These reasons are not really that important though.  I hardly ever use secondary grill grates and built in grill lights usually get gunked up by smoke and grease.

The major reasons I would choose the Laredo are the cooking grates and ash cleanout system.

The Laredo’s Cooking Grates are Easier to Clean

A big reason why I prefer the Laredo is the design of the cooking grate.  The Laredo has a simple cooking grate made from coated rods compared to the cross hatch grate on the Pro 850.

The grate on the Pro 850 is heavy duty and looks cool.  What I dislike about cross hatch style grates is that I have a hard time getting grates like these clean.  It is much easier to clean off a simple rod grate like you get on the Laredo. 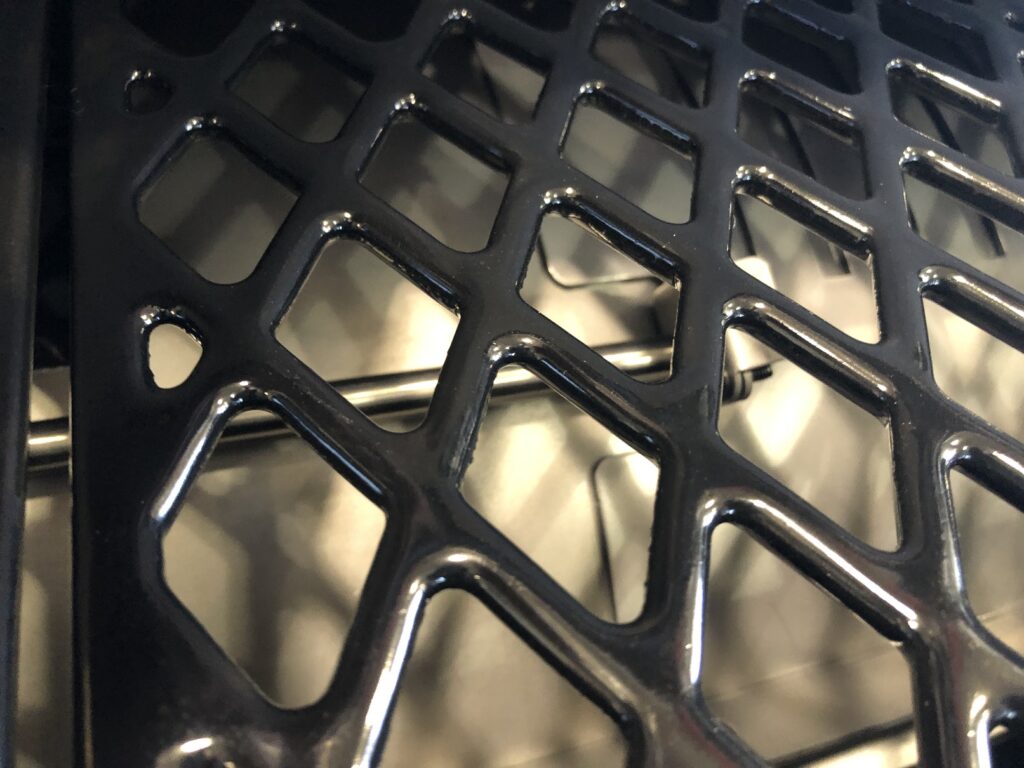 Another massive reason I would go with the Laredo is that it has an ash cleanout system on the front of the grill.

One of the things I hate most about pellet grills is hauling out the shop-vac to clean the ashes out of the bottom of the grill.

If you buy the Pro 850 you are still going to have to break out the shop-vac about once a week because, unlike on the larger Pro 1150, this grill does not have an ash cleanout system. 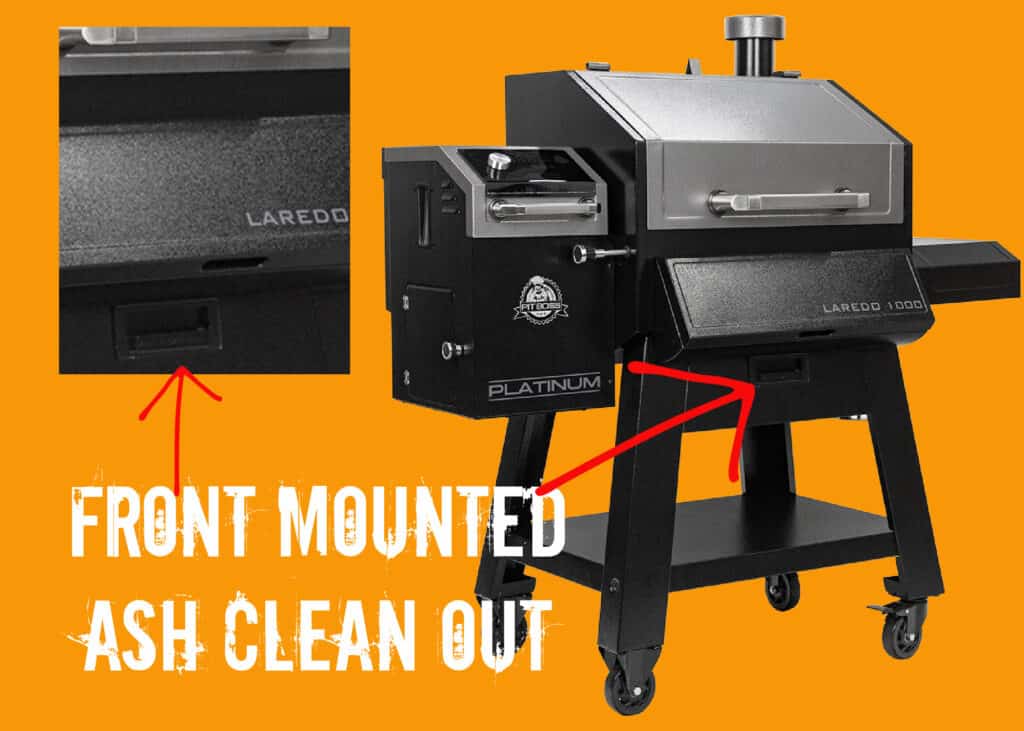