Pit Boss has four vertical electric smokers, two with digital controls (Silver Series) and two with analog controls (Blue Series).  I wanted to share the information I have on this new product line so I put together this Pit Boss Electric Smoker review.

There are two versions of the Blue Blazing analog electric smoker, the 2 Series and the 3 Series.  The only difference between the two smokers is that the 2 Series has three cooking grids while the taller 3 Series has four.  The respective cooking area is 593 versus 791 square inches.

These smokers are powered by a 1650 watt heating element that lets these cookers operate between 100F and 325F.  There is a water tray inside the main cooking chamber and a tray for wood chips that slides out for easy refilling while you are smoking.

The biggest feature to understand about these smokers is that they have an analog control system which means you will have to spend some time learning how to dial in the temperature you want.

These smokers have been around for a few years now and there are very few customer reviews to be found on the Internet.  I was able to find a couple of reviews at Walmart and a few some more at Amazon. The reviews on the Pit Boss website are mixed up with the reviews for their Copperhead vertical pellet smokers so they really were not useful. 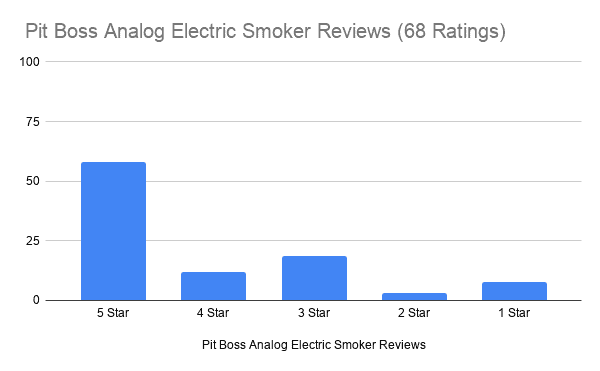 Combining the 58% 5 Star reviews with the 12% 4 Star reviews indicates that 70% of buyers were happy with this smoker and 30% were not.  I do need to point out that the relatively low number of reviews does not make this a robust data set so take these values with a grain of salt.

Personally I would not encourage someone to purchase a product that 30% of owners didn’t like and less than 60% gave it a 5 star rating.

While these smokers get low ratings I don’t entirely blame Pit Boss.  There are inherent problems with electric smokers in general such as difficulty generating enough smoke at the right temperature, slow heat up times and difficulty maintaining temperatures in cold weather.  Many of these problems will be become magnified when the smoker has an analog control system that must be manually adjusted to adapt to different weather conditions.

There are two versions of the Silver Star digital electric smoker, the 2 Series and the 3 Series.  The only difference between the two smokers is that the 2 Series has three cooking grids while the taller 3 Series has four.  The respective cooking area is 593 versus 791 square inches.

These smokers are powered by a 1650 watt heating element that lets these cookers operate between 100F and 400F.

There is a water tray inside the main cooking chamber and a tray for wood chips that slides out for easy refilling while you are smoking.  The Silver Star smokers have a digital control panel that makes it easy to set the desired cooking temperature.

I was able to find three times more reviews for the digital smokers than I found for the analog models.  The increased number of reviews did not fundamentally change what people thought about the product.  Here is what the data looks like for the 211 reviews I compiled (current as of November 24, 2020) 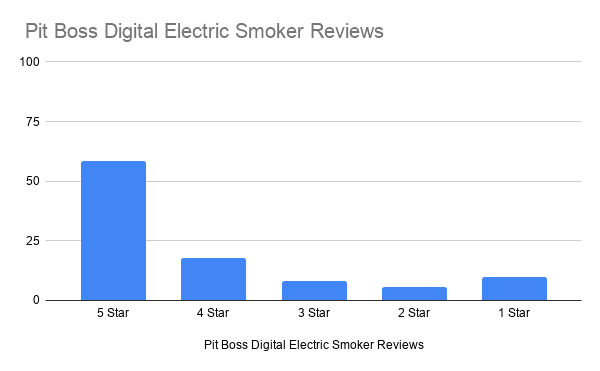 Combining the 58% 5 Star reviews with the 18% 4 Star reviews indicates that 72% of buyers were happy with this smoker and 28% were not.  I was surprised to see that both the analog and digital versions of these electric smokers each had a 58% 5 Star rating.

When it comes to electric smokers masterbuilt has been King of the Hill for quite a while.  So if you are looking at a Pit Boss electric smoker then you need to compare them against the Masterbuilt products.

Masterbuilt makes a lot of different models of smokers including some that have Bluetooth, rotisseries, etc.  To keep this comparison fair I chose two smokers that are extremely popular, sold at the Big Box stores and have the same basic functionality and price as the Pit Boss smokers.  For the analog comparison I chose the John McLemore Series that is sold at Lowes ($189).  For the digital comparison I chose the MES 130B that is sold at Home Depot ($249).

Here are the head to head customer reviews for the analog controlled models (Pit Boss Blue vs Masterbuilt John McLemore).

Here are the head to head customer reviews for the digitally controlled models (Pit Boss Silver vs Masterbuilt MES 130B). 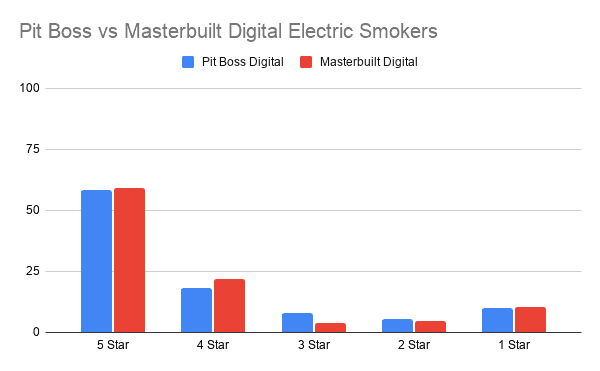 As far as I am concerned these two brands have nearly identical customer ratings.  I do not think that there is a large enough data set to try to split hairs on these reviews.  On average, about 70-75% of owners really like this type of smoker and are pleased with the purchase.

When you read through the negative reviews for the Masterbuilt smokers you will see that both brands get very similar complaints.  That really isn’t surprising given how similar the designs are between the brands.

If you are trying to choose between these brands then I would either wait around and see which one goes on sale first or buy simply based upon which one you think would look nicer sitting on your deck.

Should You Buy One?

This is a tough call.

I am not a huge fan of electric smokers but I do understand that they have an attractive price point and seem like an easy way to get started smoking meats.  While I suggest there are other smokers that are better for beginners I do understand that this type of smoker will be the entry point for many people.

If you go into this knowing that you probably won’t be able to hit/maintain the top advertised temperatures then, at these price points, I think you could have fun with one of these.  I suspect that if you took the time to construct some windbreaks for these smokers then they would be able to do better in adverse weather.

When you are dealing with smokers that cost around $200-$250 you shouldn’t expect it to perform like a competition grade offset smoker.  Be prepared to do some tinkering and learning the personality of these smokers…it will be a great excuse to sit outside and drink another beer 🙂