The Pit Boss Austin XL is a Walmart exclusive pellet grill that ticks a whole lot of the right boxes.  The grill is massive, looks nice and has a very attractive price of just under $500.

There are a few things to consider before you buy this grill and you especially need to take a look at all of the user reviews that are charted below. 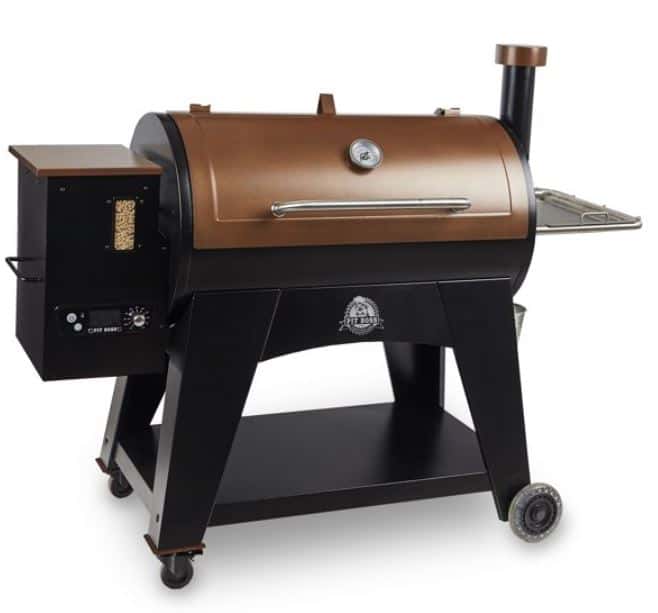 Some extra goodies you get with the Austin XL include a removable stainless steel side/serving tray and a meat probe that displays on the control panel.

The biggest extra that you get with the Austin XL is the Flame Broiler that comes with most Pit Boss grills.  The Flame Broiler is a series of slits in the heat shield that sits directly over the fire pot.  The slits can be covered by a second heat shield if you don’t want your meat to have direct access to the flames.

I like the Flame Broiler system because playing with fire is a huge part of grilling for me.

There are four issues related to the design of the Austin that ought to be considered before you make the purchase.

The tradeoff you are making to have direct access to the flames is that the grill is going to have an uneven temperature profile.

The second issue has to do with the shape of the grease tray.  The grease tray directs dripping grease from inside the grill to a small pail outside the grill body.  The tray on the Austin is a rounded dome that works fine but is a pain to clean.  You can try lining the tray with foil but the need to be able to slide the tray around for the Flame Broiler aes that complicated.

The grease tray on other pellet grills like Z Grill and Traeger are straight sheets that are easily lined with foil and can be scraped clean with a spatula.

The third issue is the smoke stack design.  The Austin has a top mounted smoke stack that looks like what we think a smoke stack ought to look like on a smoker.  A fundamental problem with almost all pellet grills though is that they burn too clean and don’t produce a strong smoke flavor on your meat.  To counter this problem manufactures are now placing the smoke outlet vents in the back of the grill near grate level.  The rear mounted vents makes the smoke come down and over the meat before exiting the smoker.

The backed based smoke vents are now common on some new Pit Boss grills as well as higher end Traegers like the Ironwood.

The fourth issue is that the grill is massive.  I realize that size is one of the reasons you want this grill but I don’t know of many people who actually need this much capacity.  You can get the smaller Classic grill, save yourself $100, and still have plenty of grill space.  You should also consider that the Austin weighs almost 200 pounds and as a result will be a bear to assemble.

The Austin has been on the market since 2018 and there has been sufficient time for a meaningful amount of user reviews to be posted.  I compiled all of the reviews for this grill from the Walmart, Pit Boss and Amazon websites and ended up with 409 real world reviews (current as of June 18, 2020).  Here is what the data looks like. 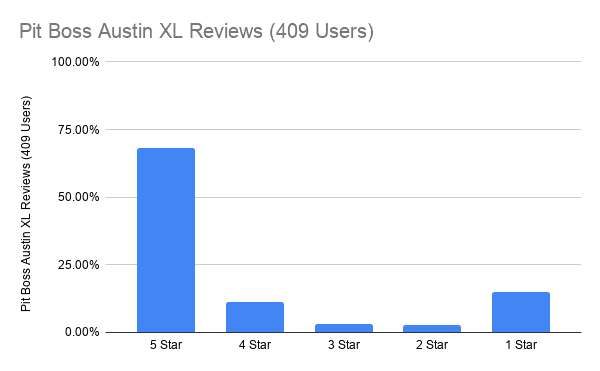 Only 68% of reviewers gave the Austin a 5 Star review while 15% felt compelled to leave a 1 Star review.  Having less than 70% 5 Stars and more than 10% 1 Star is a worrying situation.

There were many different types of complaints about this grill.  The primary issue was that the paint would bubble then peel off which allows the grill to rust.  Secondary issues were reliability issues that ranged from broken augers, faulty hot rods and bad motherboards.  Here is a link to all of the 1 Star reviews on Walmart.

Should You Buy The Pro Series 1100 Instead?

The combination of the Austin’s large size and low price is what made the grill so attractive to so many people.  However, paying about $500 for a grill that has 15% 1 Star reviews is a bit troublesome.  If what you want is a large Pit Boss pellet grill then you might be tempted to spend an extra $100 and get the Pro Series 1100 that is exclusive to Lowes. 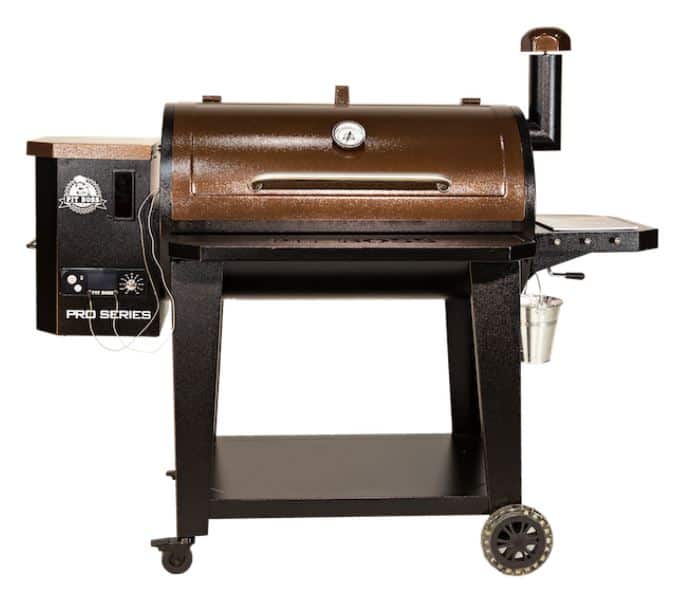 The Pit Boss Pro Series 1100 is a massive, great looking, and solidly built grill with plenty of extra features that costs about $600.

Unfortunately the user review profile of the Pro Series 1100 is almost identical to the Austin XL. 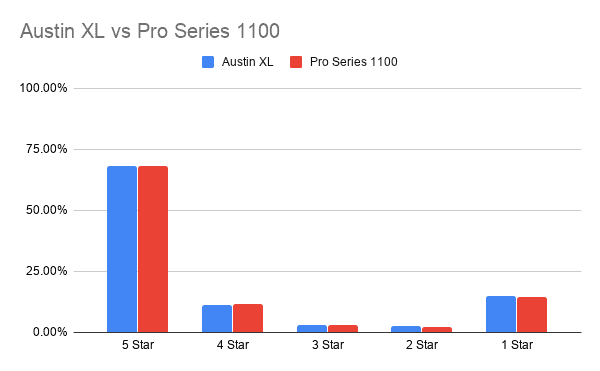 If I were trying to decide between the Austin and the Pro Series 1100 it would be hard.  These grills are a coin flip…if you get one that works and don’t mind dealing with paint issues then both are worth looking at.