The Oklahoma Joe’s Bronco is a game changer in the world of drum smokers.  The Bronco offers precision temperature control, multiple cooking options, easy portability and attractive styling.  The Bronco is offered in two models, Original and Professional, with the primary difference being size and cost.

This article will show you the key features of the Bronco, explore some real world customer reviews and compare the Bronco against other types of smokers so you can determine if the Bronco is the right smoker for you. 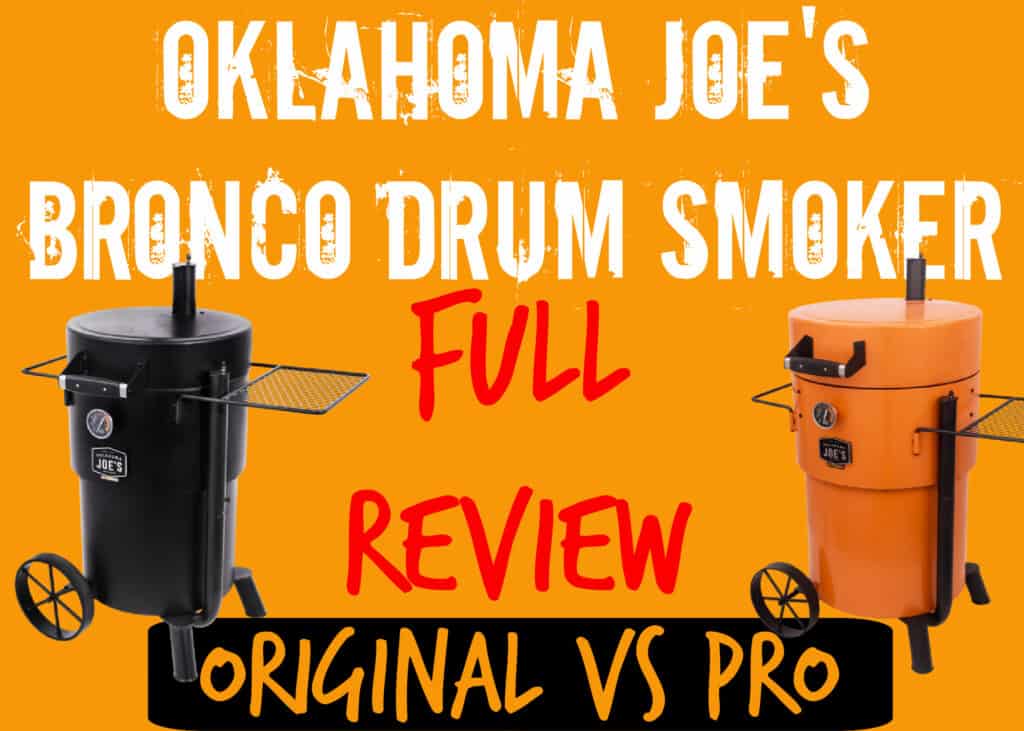 This article is meant to help you figure out the important features and benefits of the Bronco drum smoker.  However, there are a few things I want to mention before we get into this guide just to let you know where I stand with this smoker.

The Bronco is a well designed, non traditional drum smoker. 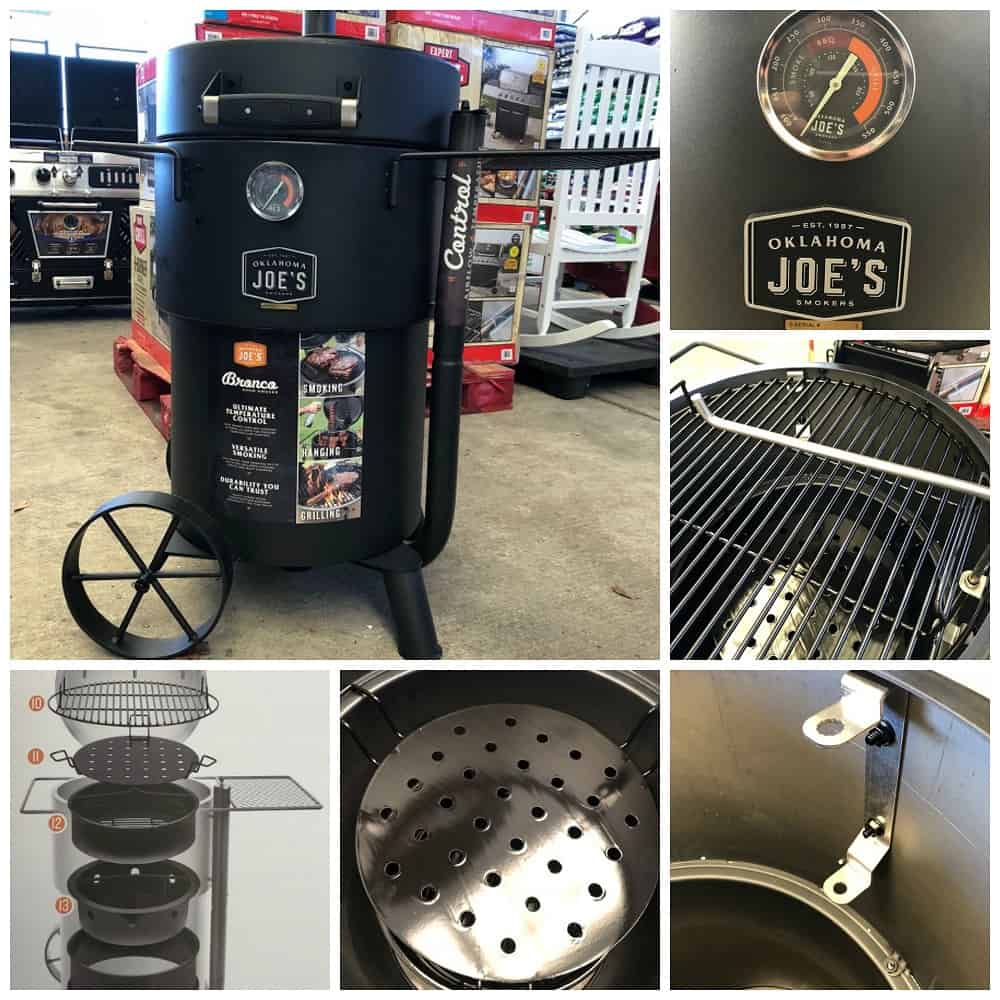 Most drum smokers take a 55 gallon steel barrel and modify it to become a smoker.  They drill holes for air vents, add brackets to serve as grate holders, etc.  The original lid for the barrel is fitted with a handle and used as the smoker lid.

In contrast, the Bronco is a multi-component cooker that has been designed and engineered to look like a drum.  The body on the Bronco is comprised of two drum sections that are bolted together.  Additionally the Bronco has a hinged lid with extra dome clearance like you find on a kamado smoker. The base of the lid is fitted with a sealing gasket that sinks into a shallow groove at the top of the drum body. 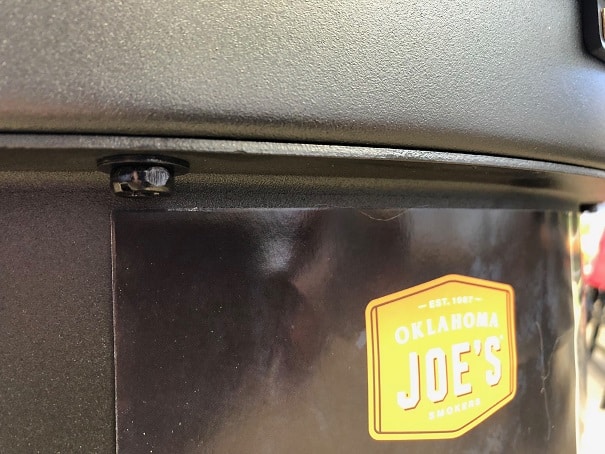 The Bronco has an 18 inch grate that offers 284 square inches of cooking area.  The charcoal basket holds about eight pounds of charcoal and is covered by a perforated heat deflector plate.  The heat deflector is removable if you want to cook directly above live coals.

There is a single air intake in the floor of the smoker and a single air outlet in the lid.  Both air vents have movable covers with calibration marks that let you dial in a temperature.  The combination of tight construction, a sealing lid gasket and an easily regulated air supply makes it extremely easy to set and control temperatures in this smoker. 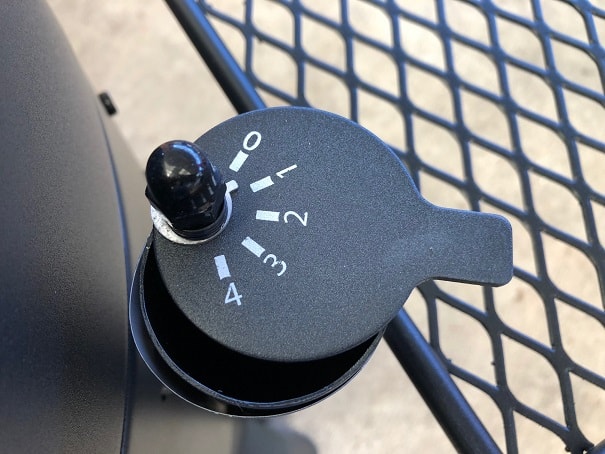 Other nice features of the Bronco include a body mounted over sized thermometer, metal side table and classic Oklahoma Joe branding including the wagon wheel tires.  To the best of my knowledge, the Bronco is the only drum smoker that has a side table and let me tell you, having a little working space to put your cutting board, grill tools or a platter of burgers is a really nice feature.

The Bronco is also the only drum smoker that has wheels which makes moving it around very easy.

The Bronco is a multi-functional cooker that can be used three different ways. You can use the Bronco as a traditional smoker, as a charcoal grill or to hang and smoke ribs and chicken from the three stainless steel meat hanging rods. 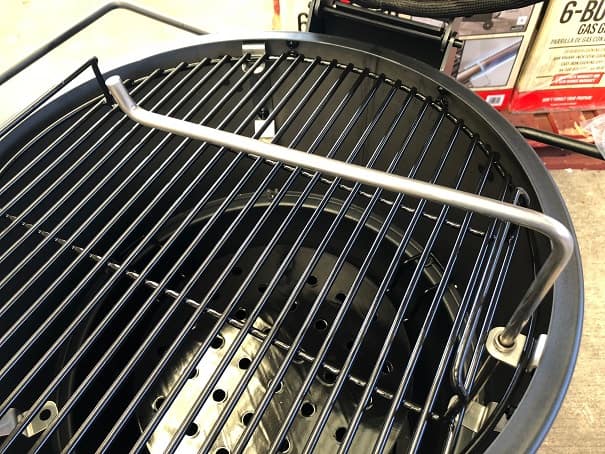 Using as a Traditional Smoker

You can use the Bronco as a traditional smoker and, if you arrange and light the charcoal correctly, get about 15 hours of “Low and Slow” burn time from a single load of charcoal.  This is plenty of time to smoke a brisket or a couple of pork butts.

Here is a video that shows how I set up the Bronco for low temperature smoking.

Using as a Charcoal Grill

You can also use the Bronco as a traditional charcoal grill by placing the charcoal basket on top of the heat diffuser. You can either keep the diffuser in its “down” configuration that you use while smoking or flip it over to get the charcoal closer to the cooking grate.  The user manual says to flip it up but that was not a stable configuration in my cooker.

Here is a video showing how I used the Bronco as a pretty nice charcoal grill.

Use to Hang Ribs or Chicken

One way of cooking on a Bronco that some people love is to use the three stainless steel rods and assorted hooks to hang ribs and chickens vertically in the cooker.  I have never been a fan of that technique as invariably the ribs closer to the fire get a little scorched by the time the entire rack is done cooking.

But, like I said, some people love the idea of hanging ribs so here is a fun video showing you the technique on this cooker.

Cosmetic differences between the two models are that the Pro is available as either black or orange and comes with a name plate on the back of the cooker where you can add a customized logo.

I gathered up all of the customer reviews for both the Original and Pro models of the Bronco from Walmart, Lowes and Amazon.  While the total number of reviews was low (less than 200 as of January, 2021) they paint a pretty clear picture of user satisfaction and are presented below. 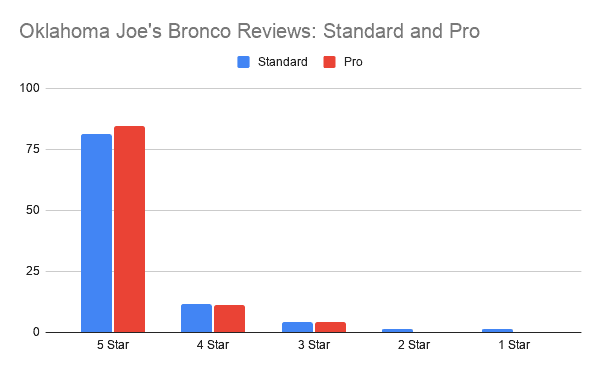 Two items really struck me when I looked at the data from the reviews.

The first item that grabbed my attention is that people really love their Broncos.

Here is a video I put together of my full hands on review of this cooker.

The general reasons people love their Bronco smokers include:

Once people figured out how to manage their charcoal and work the air vents they were able to easily turn out amazing barbecue.  The Bronco holds temperatures rock steady for hours on end and is a very fun grill to use.

As far as value is concerned there probably is not a better bang for your buck than the 18 inch model.

After reading through the limited number of reviews from people who were unhappy with their smoker the following trends emerged.

For many owners the Bronco was their first drum smoker and they simply did not understand how to use one.  They had trouble getting the smoker to get up to temperature, they were severely overshooting temperatures and running out of charcoal.

The inability to easily add more charcoal during a cook seemed to be the biggest complaint.

Other folks didn’t like the size of the cooker and were upset that it came with brackets for two cooking grates but only one grate comes with the cooker.

The Bronco Vs Other Smokers

In order to really appreciate how great the Bronco is I think it makes sense to offer some quick comparisons to other smokers.  Here are the top contenders.

The Pit Barrel Cooker is an affordable 18.5 inch drum smoker that re-ignited the barbecue world’s interest in hanging ribs and chickens over an open fire.  The PBC is a great cooker, the company is a small, veteran owned business and the owner is a really nice guy.

While there are many differences between the PBC and the Bronco the largest has to do with air/temperature control.  The PBC uses a bottom damper to let in combustion air and four open holes in the top of the barrel to let air out.  There really isn’t an easy mechanism to control the temperature in a PBC and this is by design.  The idea behind a PBC is you build your fire, hang your meat and walk away.  You don’t mess with vents you just let the meat and fire work their magic.

I do not have a single negative thing to say about the PBC.

I will say that the Bronco is a better cooker.  The Bronco can do everything that a PBC can do plus:

The 18.5 inch WSM is a great comparison to the 18.5 OKJ Bronco.  These two smokers are about the same size, cost about the same and both turn out amazing barbecue.  The WSM offers amazing temperature control and is what I used to learn to barbecue. It has a soft spot in my heart.

These two smokers each have a couple of strong points going for them.

WSM Win #1: It is easy to add more charcoal and wood chunks to a WSM in the middle of a cook.  This is not the case with the Bronco.  If you do not get the Bronco loaded and lit correctly then you will be out of charcoal in six hours and will have to take everything out and start with a fresh load of coals.

WSM Win #2: There is a large community of friendly WSM owners who love to share their knowledge on how to use and enjoy the WSM to the fullest. This is an unfair advantage for the WSM because it has been around for so long and the collective knowledge base is deep.

Bronco Win #1: The Bronco is 5x easier to move than the WSM.  I kept my WSM in the garage when it wasn’t in use and dreaded the thought of moving it back and forth to my driveway.  The WSM comes in three sections that I had to carry in three different trips.  After cooking there would have to be a fourth trip to deal with a large water pan full of grease.  The aggravation of moving the WSM is one of the reasons I stopped using mine.

Bronco Win #2: It is easier to control the air flow on a Bronco than on a WSM.  The WSM has three daisy wheel dampers across the circumference of the base with each damper allowing air into three holes (9 air inlet holes total).  You can spend a lot of time tweaking those dampers getting your WSM to line out.  The Bronco has a single air inlet that is easy to set.

For the same price of a Bronco you could also get an Oklahoma Joe’s Highland offset smoker.  The Highland is a beautiful looking smoker but, as far as performance is concerned, can not come close to the Bronco.

As soon as you buy a Highland you have to start modifying it to get it to work like it should.  You have to use gaskets and high temperature caulk to seal up all of the leaks.  You have to extend the smoke exhaust down to grate level.  You need a baffle to even out the heat.

After to get all of the mods in place and start cooking you will find the fuel usage to be astronomical.  I can get 15 hours of Low and Slow from 8 pounds of charcoal on a Bronco.  That same amount of charcoal would only last about four hours on a Highland.  he Highland uses so much fuel hat you need to tend the fire every 45 minutes.  Compare that against the Bronco where you can get your temperature set and walk away for hours on end.

Is the Bronco Worth the Money?

With an MSRP of $299 the Original 18 inch Bronco is worth every penny.  The Bronco has great performance and is less expensive than two other comparable cookers, the 18 inch Pit Barrel Cooker and the 18.5 inch Weber Smokey Mountain.

As far as value is concerned you will be hard pressed to find a better deal than the 18 inch Bronco.

With an MSRP of $699 the Professional 21.5 inch Bronco is a different story. The Pro costs more than twice as much as the original but you do not get twice as much smoker. Before I would buy the Pro I would probably do one of the scenarios below:

I actually like the idea of having two 18 inch Broncos.  I could have one set up for Low and Slow brisket and have the second one cranked up on High for chicken wings!