Nexgrill entered the griddle market in 2019 with two flat tops that look like clones of Blackstone griddles.  The Nexgrill products are sold exclusively through Home Depot and, at first glance, look like fine griddles.

However, when you take a closer look at real world data it appears that Blackstone makes the better product. 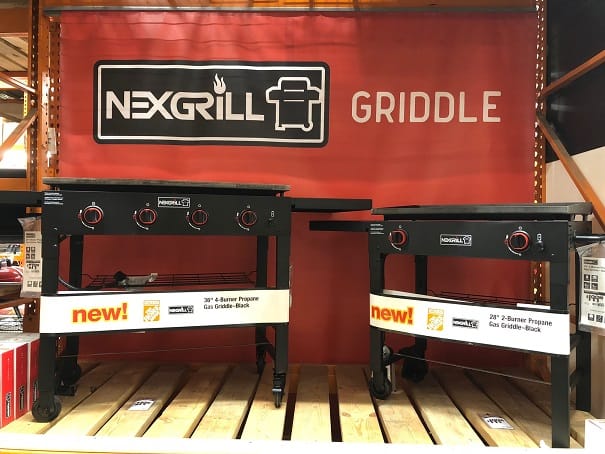 These griddles are complete knock offs of the Blackstone 28 and 36 inch griddles which are pretty dang nice products. 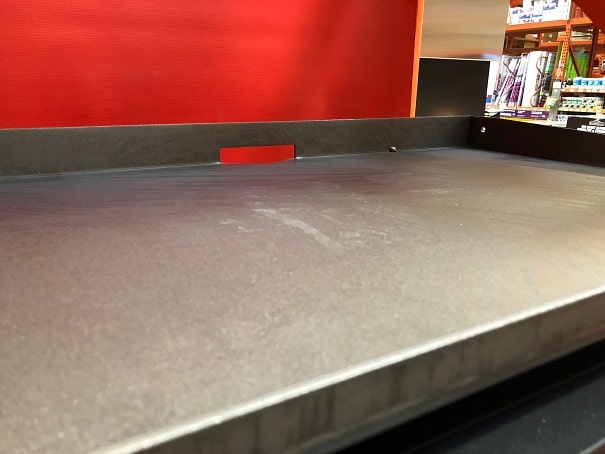 Just like the Blackstone these griddles have a rear grease drain for easy clean up. 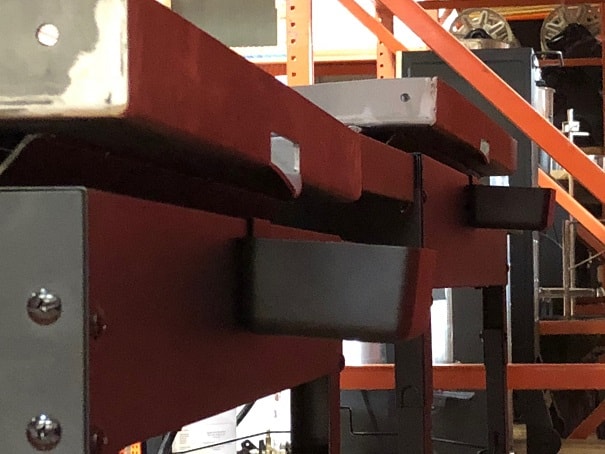 The 36 inch griddle offers 732 square inches of griddle area that is heated by four 15,000 btu/hr burners.  That works out to a heating capacity of 82 btu/hr per square inch.  Nexgrill says this is enough room for grilling 36 burgers at a time so you can easily feed over 20 people.

The four burners are straight tubes that let you dial in the exact temperature zones you want.

The griddle has two fixed caster wheels and two swivel wheels so it rolls about pretty easy but can be locked into place once you get it where you want it, has dimensions on 26 x 36 x 64 inches, and weighs in at 122 pounds.

Everything about this griddle LOOKS identical to the Blackstone four burner but there is a big difference in the griddle itself that makes the Blackstone better.

The 28 inch griddle offers 514 square inches of griddle area that is heated by two 19,000 btu/hr burners. That works out to a heating capacity of 74 btu/hr per square inch.

The griddle has two fixed caster wheels so you have to lift one end up by the handle and push it around if you want to move it.

The dual burners are actually horseshoe shaped to enable a more even heating of the griddle surface. 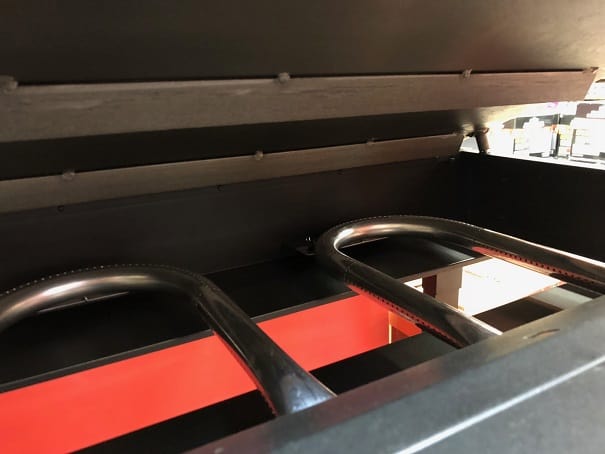 The equivalent Blackstone griddle has two “H style burners” but other than that detail the Nexgrill LOOKS identical to Blackstone (but isn’t).

When you look at the real world reviews for these grills it is apparent that people like their Blackstone griddles more than they like the Nexgrill product. 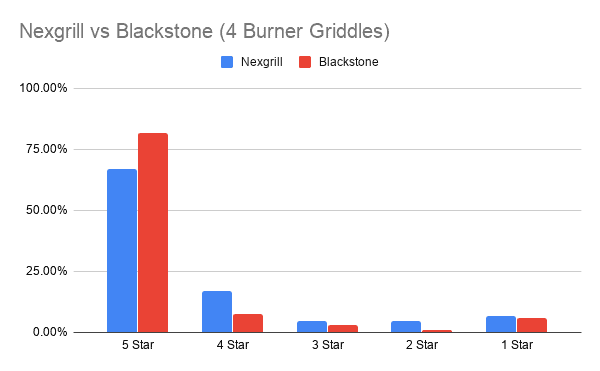 Blackstone has a clear advantage in 5 star ratings at 81% vs 66% for Nexgrill.  Even when you combine the reviews of all happy customers (5 Stars + 4 Stars) Blackstone still has the edge with an 89% positive rating compared to 83% for Nexgrill. 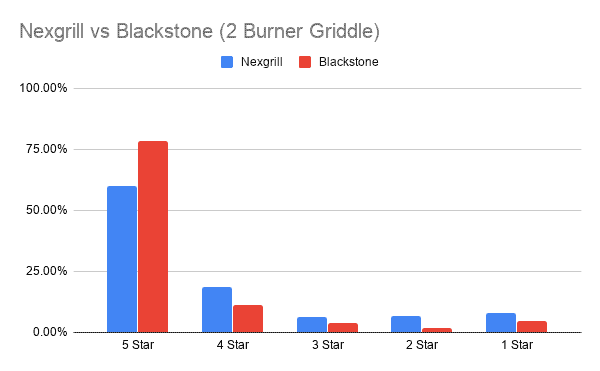 Blackstone has a clear advantage in 5 star ratings at 78% vs 6o% for Nexgrill.  Even when you combine the reviews of all happy customers (5 Stars + 4 Stars) Blackstone still has the edge with an 89% positive rating compared to 78% for Nexgrill.

I dug through all of the negative (1 and 2 Star reviews) for the brands to find out what the problems were and two issues emerged.

The primary complaint about both brands is excessive rusting of the cooking service.  While the complaint is common to both brands it appears to be a more common issue for Nexgrill.

The second complaint was unique to Nexgrill and especially for the two burner griddle.  Several Nexgrill owners were unhappy because the griddle warped.  Again, I did not see anyone complain about warping on the Blackstone.

I have two theories as to why the Nexgrill griddles occasionally warp.

Theory #1: There are three V Shaped Stiffening Bars underneath the griddle (both Nexgrill and Blackstone) that are designed to prevent warping.  These bars are attached to the griddle by multiple tack welds.

Take that theory with a grain of salt as I have only inspected a few griddles and am not a welding expert.

Theory #2: The lower grade steel that Nexgrill is using for their flat tops is more prone to warping.

Drawback #1: According to a 2008 University study, mild steel corrodes faster than carbon steel under acidic environments.  Based upon the material of construction is it safe to assume that the Nexgrill cooktop would get attacked faster by acidic marinades (anything containing vinegar) than Blackstone’s.

I cannot say for sure that Nexgrill’s warping and rusting issues are entirely because of the lower grade steel but it seems like the most probable cause.

Nexgrill introduced a new griddle in 2020 with stainless steel cabinetry, side tables and lid.  The griddle looks pretty and is designed to be a direct competitor to the Blackstone Pro Series. 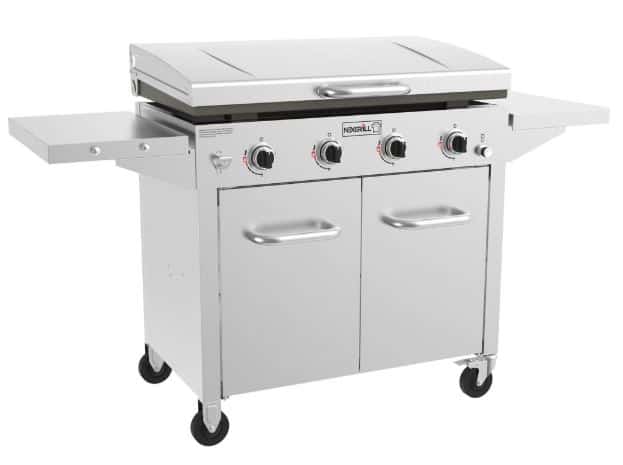 At this time (June 17, 2020) there are not enough reviews to really understand the quality of this griddle.  My biggest concern is that while the outside is prettier, the actual griddle is the same in the original four burner which means it has the potential to have rust/warping issues.

However, when I was scrolling through the “Questions” section on the Home Depot site I came across this piece of information:

It looks like Nexgrill has recognized that warping is an issue and have taken steps to address the problem by reinforcing the griddle.  I have no idea what steps they took to reinforce the griddle and if it will be effective.

I will post an update once more information is available.