Mortadella is a cooked Italian sausage from Bologna.  The sausage is an emulsification of ground pork blended with diced pork back fat and various spices.  Commercial mortadella is typically stuffed into large, 4-5 inch diameter casings and sold as thinly sliced cold cuts.

Mortadella has an extensive history going back well over a thousand years.  The first statue that incorporated this sausage was made in 1242 and the first recipe was recorded by Tanara in 1600.  Original recipes called for the incorporation of 33-35% diced fat while modern DPO regulations specify a minimum of 15%.

The origin for the name of this sausage is not well understood but is suspected of being based in the use of a mortar to grind the various spices that flavor the meat. 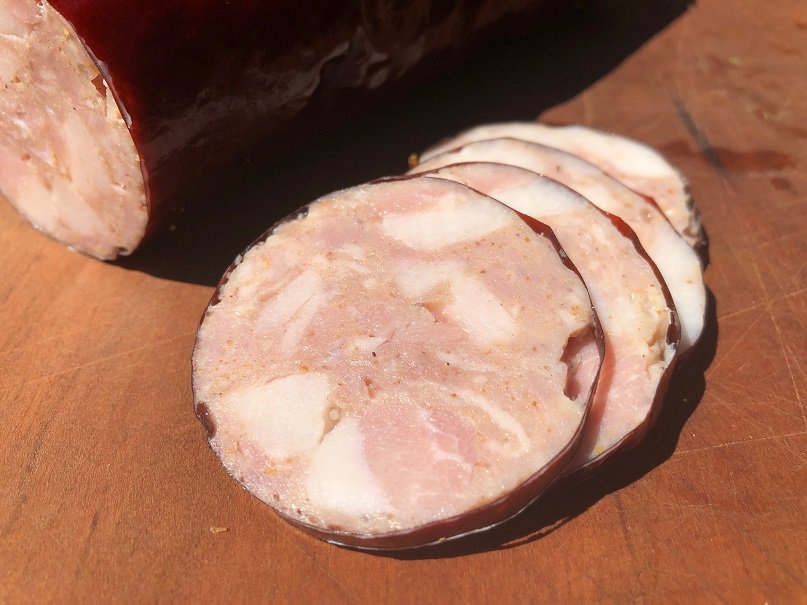 How to Make Mortadella 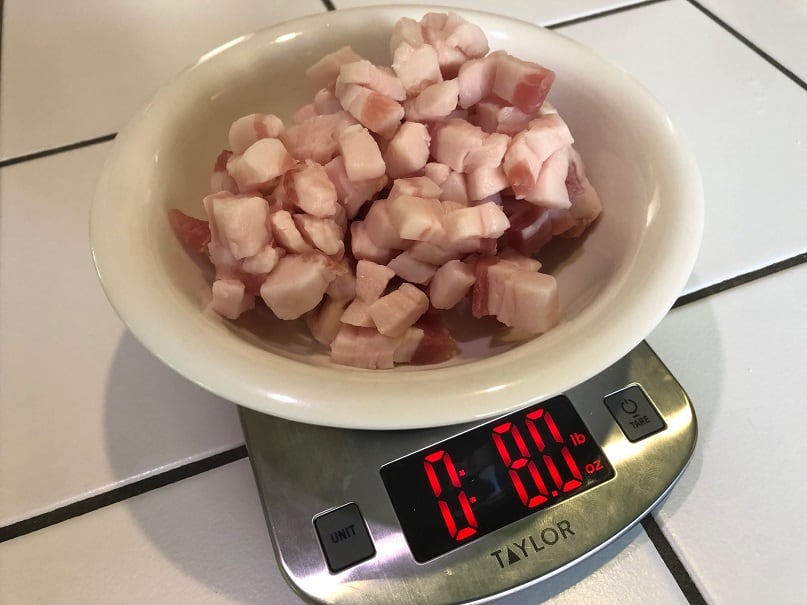 The ingredients for my version of mortadella are as follows: 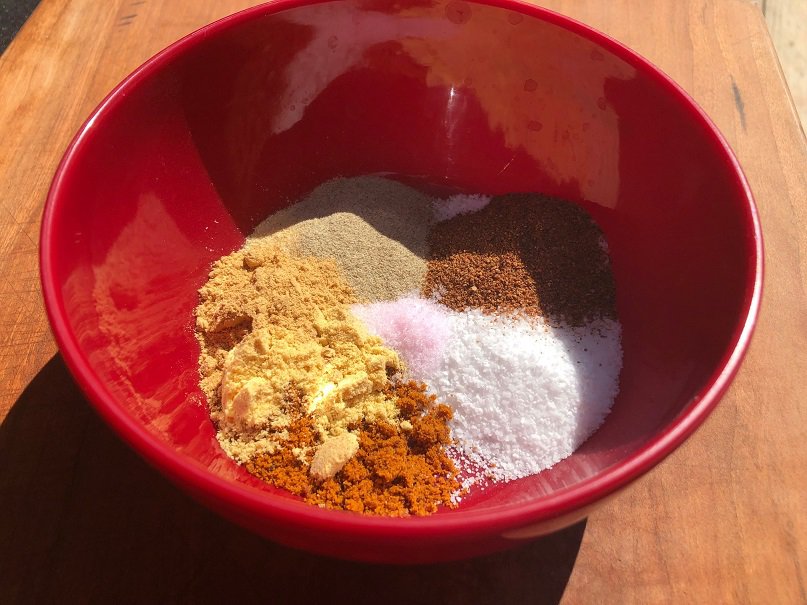 Cut the pork back fat into a quarter inch dice.

Place the diced pork fat into the freezer and allow to chill for at least 30 minutes.

Combine all ingredients EXCEPT the diced pork back fat and mix with a stand mixer on low for two to three minutes until a smooth paste is formed.

Place mixing bowl with the meat mixture into the freezer for 15-20 minutes to let the meat chill.

Remove the mix from the freezer and stuff into the largest casings you have available, tie off and place sausages into the refrigerator for 1-2 days to allow the cure to work.

After the sausage has cured for 1-2 days remove it from the refrigerator and poach in 175F water until an internal temperature of 150F is reached (typically 20-25 minutes).

Once the sausages reaches 150F remove from the poaching liquid and place in an ice bath until completely cooled. 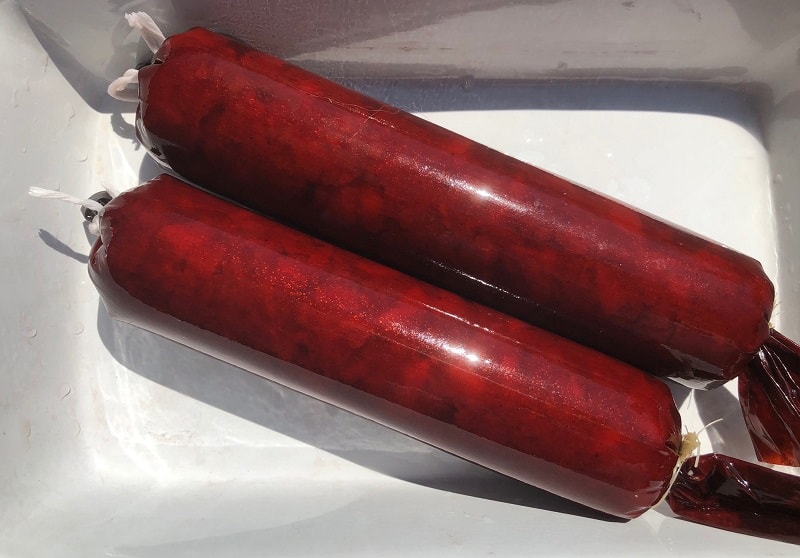 Mortadella is a classic ingredient for New Orleans style muffalto sandwiches and is an excellent addition to charchutterie plates. Green olives and pistachios can be added to the recipe for extra color and texture contrast.
Keyword Mortadella

Casings: Traditionally mortadella is stuffed into 4-5 inch casings.  The largest casing that I have available is 1.5 inch so that is what I used.  If you wanted to try making a larger diameter sausage you could form a loaf on a piece of plastic wrap, roll it up and then spin and twist the sides to form a large cylindrical sausage.  It sounds easy but is actually a bit awkward.

% Diced Fat Content: The sausage in this recipe had a diced fat content of about 30% which is what was specified in the recipes from the 1600s.  Modern varieties of this sausage can contain as low as 15% diced fat.  You could completely omit the diced fat and you would essentially be making the cold cut we know as bologna.

Seasonings: The seasoning variations for this sausage are all over the place.  It is believed that about a thousand years ago this sausage was seasoned with myrtle.  Other common seasonings include cinnamon, cloves, powdered bay leaves and coriander.  This sausage has been around for so long and undergone so many definitions that there simply is not a single seasoning profile.

Added Texture: Some people like to add pistachios or green olives for color and added texture.  With the addition of green olives you will essentially be making a round olive loaf.

I treat this sausage like a really nice bologna and use that idea to guide me on how to serve.

You could slice this guy thin and put it on some white bread with mayonnaise and yellow mustard and be happy as a clam.  Of course, you could also fry some in a skillet and then make the same sandwich along with a fried egg.  A Fried egg and mortadella sandwich…you know that would be awesome!

You could also use this as part of an “Italian Cold Cut Combo” along with some Genoa salami.  If you want to make something with a New Orleans twist then you you could make a classic muffaletta. The muffaletta originated at Central Grocery in New Orleans and features mortadella, salami and capicola on a hearty round bread along with mozzarella and olive salad. 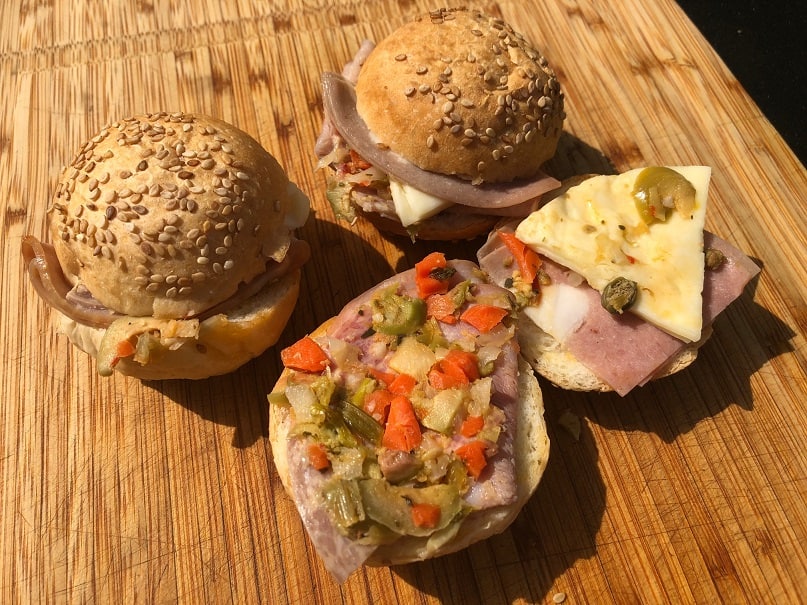 Some folks like to eat muffalettas cold but I like them better after they have spent a few minutes under a panini press and are thoroughly warmed through. 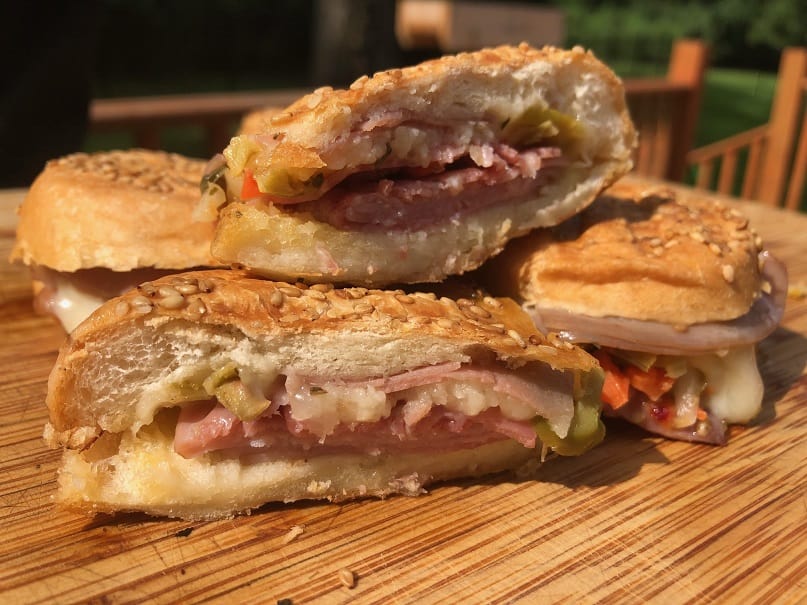 Mortadella is a fine addition to any charcuterie board where the beauty of the diced fat can be appreciated and the flavors get to shine on their own.

I have been making little snack trays with this batch.  My favorite so far was this one where I cut the sausage into cubes, coated with a spicy dry rub and served with sliced cantaloupe and smoked gouda. 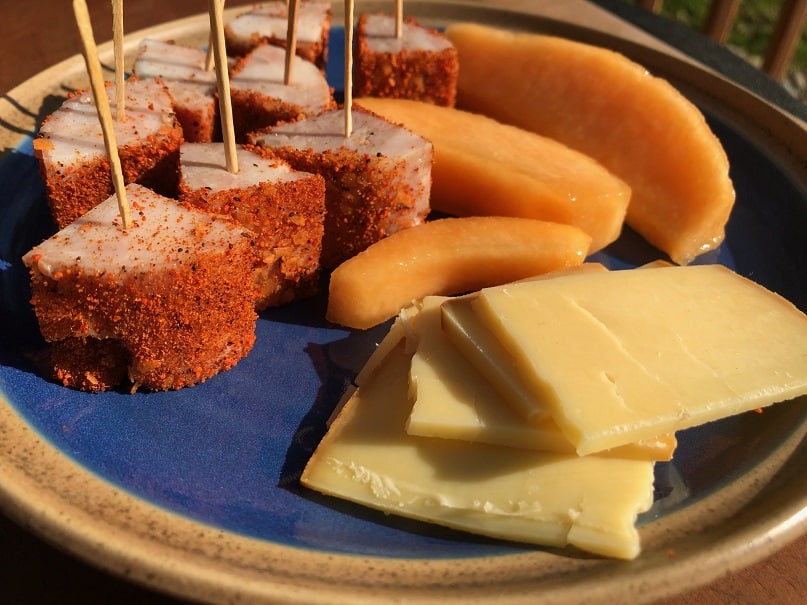 Now get out there and eat something great!