The new Traeger Silverton 620 debuted at Costco in the Spring of 2020 and a lot of folks have been wondering if they should buy the grill or not.  The quick answer is that the Silverton is a nice grill with a few minor drawbacks and is a great buy at a $699 in warehouse price point.

Let’s take a look at what is new for the 2020 Silverton and how it compares to some other Traeger grill models. 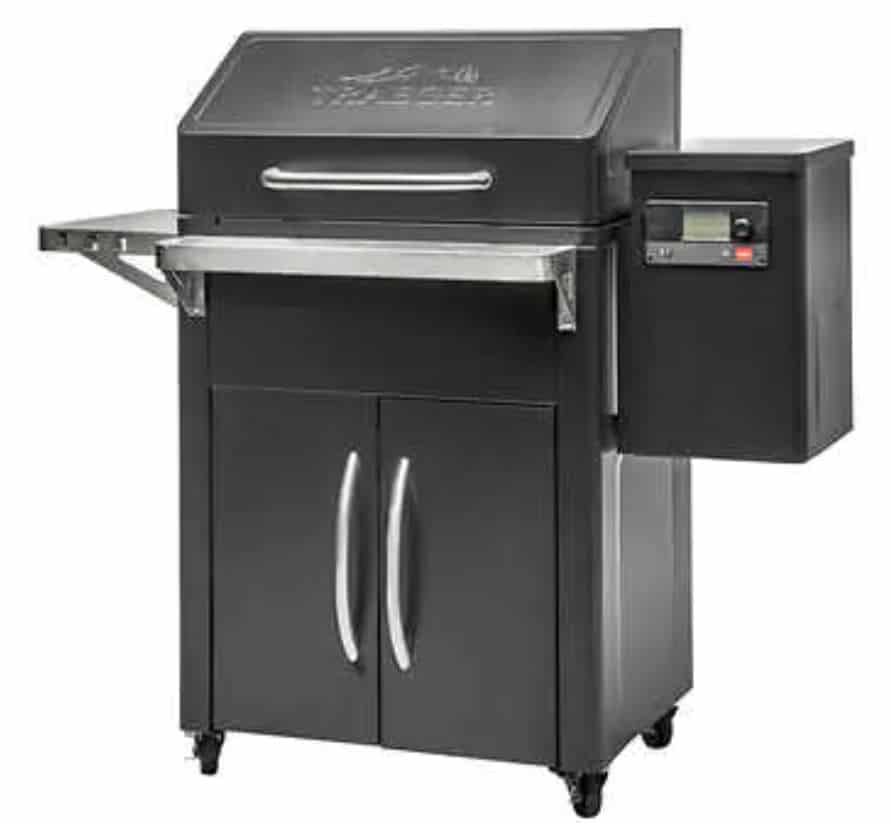 The biggest update to the Silverton is that it is now has the same WiFire controller and D2 Direct Drive system as the premium Ironwood and Timberline models.

The WiFire controller allows for tighter temperature control as well as letting you run the grill entirely from an app on your smart device.  The D2 Direct Drive system is a more powerful, and smarter motor/auger combination.

By combining the new controller with the new motor and auger you get the benefits of a new higher top temperature (500F instead of 450F) and the “Turbo Temp” feature which helps the grill back up to temperature faster after you open and close the lid. 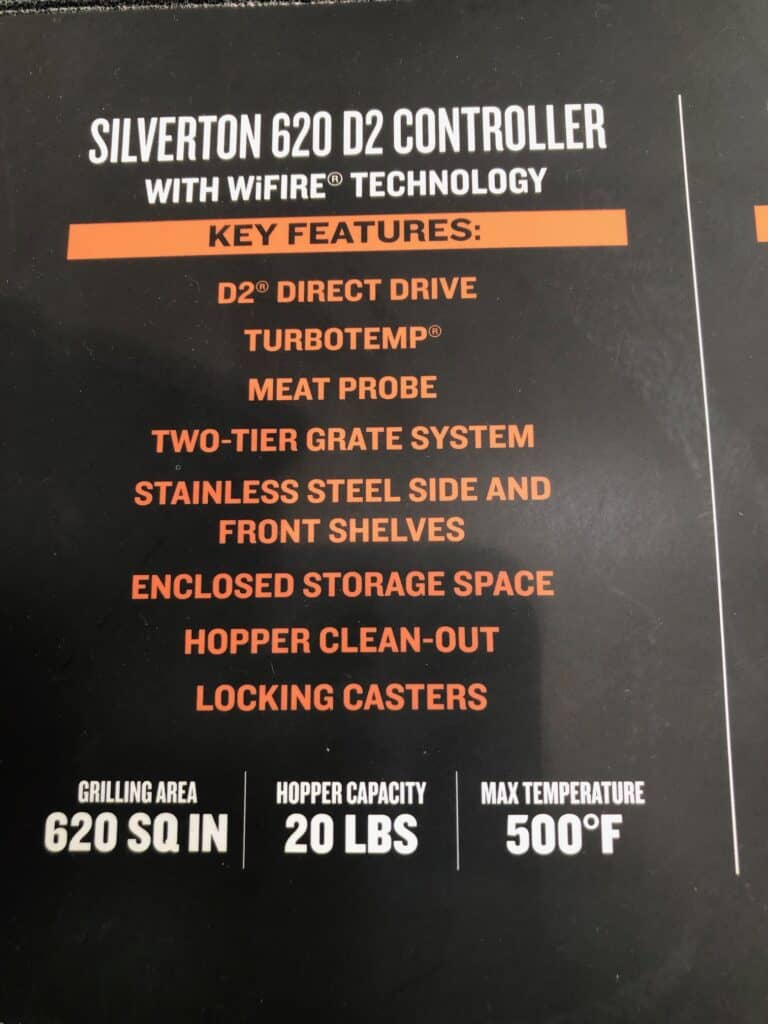 One of the big things to note is that the initial setup of the WiFire system is buggy.  The guys over at Reddit have a pretty good description of how to do the initial firmware update needed to get this grill going.

Pro Tip: The WiFire app will not connect to your 5 GHz WiFi signal.  You need to split the signal on your router to make a 2.4 GHz channel available.  Your 5 GHz channel is great for fast data transfer but has limited range.  The 2.4 GHz channel uses longer waves that are able to penetrate walls and reach your grill.

Product Specifications For The Silverton

The Silverton has a two tiered cooking grate system that offer a combined grilling area of 620 inches.  The grill comes with a 20 pound hopper which is equipped with a quick pellet dump system.

The grill has the same controller, meat probe, motor and auger as found on the Pro, Ironwood and Timberline grills.  The Silverton exhausts its some through vents in the back of the grill like the higher end Ironwood and Timberline grills. Traeger states that by venting the smoke through the back of the grill you get more smoke flavor and better convection for faster cooking.

There are two details about the grill that at first glance seem small but are actually pretty important.

The first detail is that the grill comes with a cover.  Moisture is an enemy of pellet grills and, in my opinion, a cover is essential.

The second detail is that the grease drain bucket is located inside the enclosed cabinet.  The pellet grills I use have an exposed grease drain on the outside of the grill.  I can’t tell you how many times I have knocked the grease bucket off the grill and dumped a giant pile of grease onto my driveway or patio. 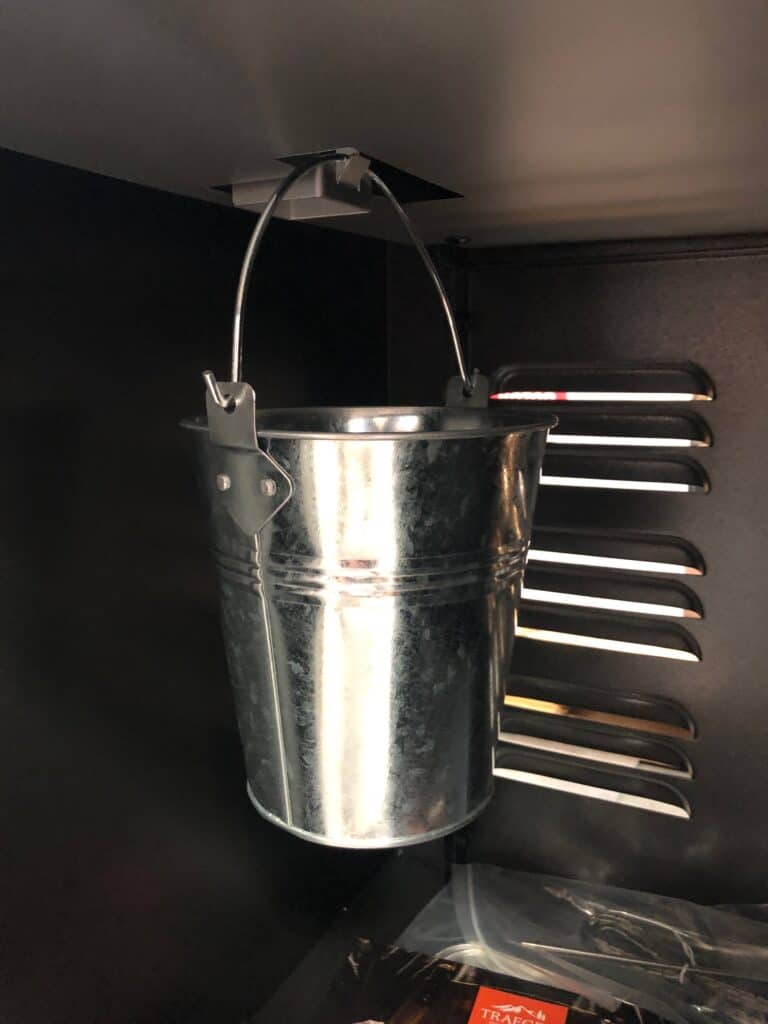 The Silverton is covered by a three year warranty.

Problems With The Silverton

The two biggest issues with the Silverton are that it doesn’t provide as much smoke flavor as the older model and the temperature profile inside the grill varies.

The lack of smoke is a problem for all of the Traegers with the new WiFire control system although folks work around this by doing an initial smoke at low temperatures (165-185F) for an hour before raising the temp to target temperatures.  The Silverton 620 does not come with the SuperSmoke mode that comes with the Ironwood series.

The inconsistent grate temperatures isn’t really a problem once you understand where the hotter spots are and adjust your techniques accordingly.  For smaller cooks using the secondary grate eliminates the problem completely.

Comparison to Other Traeger Grills

There are two other models of Traeger grills that could be considered as alternatives to the Silverton, the Pro Series 575 and the Ironwood 650.  Both of these grills are similar in size and features to the Silverton but I honestly think that the Silverton is the best buy of the bunch.

For my money I would buy the Silverton 620 over the Pro 575 in a heartbeat.

The 575 has a 15% larger primary grate than the 620 but the 620 closes the gap with a larger secondary grate.  The Silverton has a full sized pellet hopper, comes with a grill cover and is equipped with a front mounted work table.  Buying a table and cover for the Pro 575 will cost you an extra $120.

The Silverton should, in theory, also be a better cooker than the Pro 575 based on the outlet vent configuration.  The top mounted outlet vent on the Pro 575 lets the smoke go “Up and Out” while the rear mounted vents on the Silverton make the smoke go “Down and Around”.  The “Down and Around” approach provides better smoke contact with the meat while speeding up the cooking process through enhanced convection heating.

I pulled the customer reviews for the Silverton from Costco’s website and plotted them against reviews for the Pro 575 on Home Depot’s website.  Here is what the comparison looks like (data current as of January, 2021): 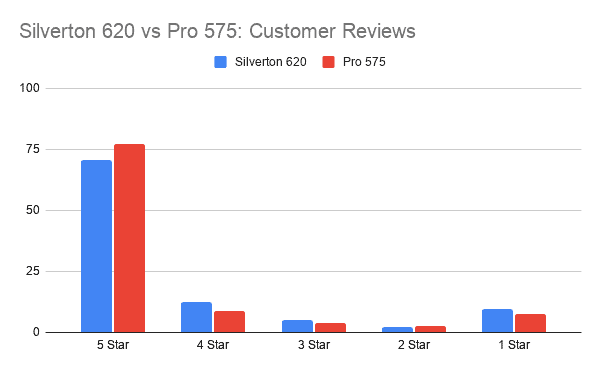 The biggest factor in the 1 star reviews for both models were grills that were either damaged in shipment or that arrived with non-functional control panels.  A secondary complaint on both grills was the difficulty of connecting the WiFire app.

Again, for my money, I would buy the Silverton instead of the Ironwood.

The biggest advantages the Ironwood brings to the table is that it has the Super Smoke mode.  Other nice upgrades on the 650 include double wall insulation and a sensor that lets you know if the hopper is getting low on pellets.  While those are nice advantages I don’t think that they are enough to warrant a $500 premium over the Silverton.

I pulled the customer reviews for the Silverton from Costco’s website and plotted them against reviews for the Ironwood 650 on the Ace Hardware’s and Home Depot’s websites.  Here is what the comparison looks like (data current as of January, 2021): 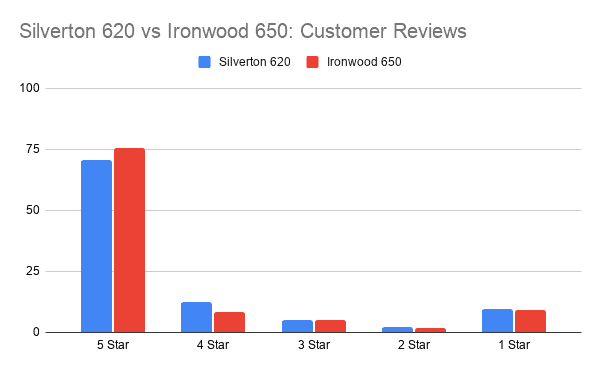 In terms of customer satisfaction the grills are equivalent which is important considering the significantly lower price tag on the Silverton.

Comparison To Other Brands of Pellet Grills

You could spend weeks comparing Traegers to other brands and still come away pretty confused.  The bottom line is that if you want a pellet grill with fancy apps and great searing abilities then the Silverton is the best buy in the Traeger product line.

If you don’t really need precision temperature control or want to control your grill via your phone then you could save a couple of hundred bucks by looking at one of these Traeger grill alternatives.

I have a Z Grill and really enjoy using it. The folks that make Z Grills appear to be the same factory that used to make Traeger’s.  As a result a Z Grill looks and functions a whole lot like the older style Traeger’s that had the manual dial in temperature controls.

Pit Boss also makes nice pellet grills.  The grills do not have all of the high tech features found on Traeger’s but they get the job done.  If you would rather spend your money on steaks than on apps then a Pit Boss might be right for you.  See Traeger vs Pit Boss for more details.

There was a lot of excitement in 2020 when Weber started making their first pellet grill, the Smokefire.  The Smokefire was designed to go head to head with the Traeger Ironside grills but it ran into some problems.  Check out Weber Smokefire vs Traeger: The Reviews Are Shockingly Bad! for more details.  The bottom line is I would buy the Silverton instead of the Smokefire.