I love to smoke chicken in my pellet grill! Smoked chicken is tasty, affordable and fast…you have to love that combination!  There are a lot of different ways to smoke a chicken but one of my favorites is to spatchcock the bird which makes it cook just a little bit faster than usual. 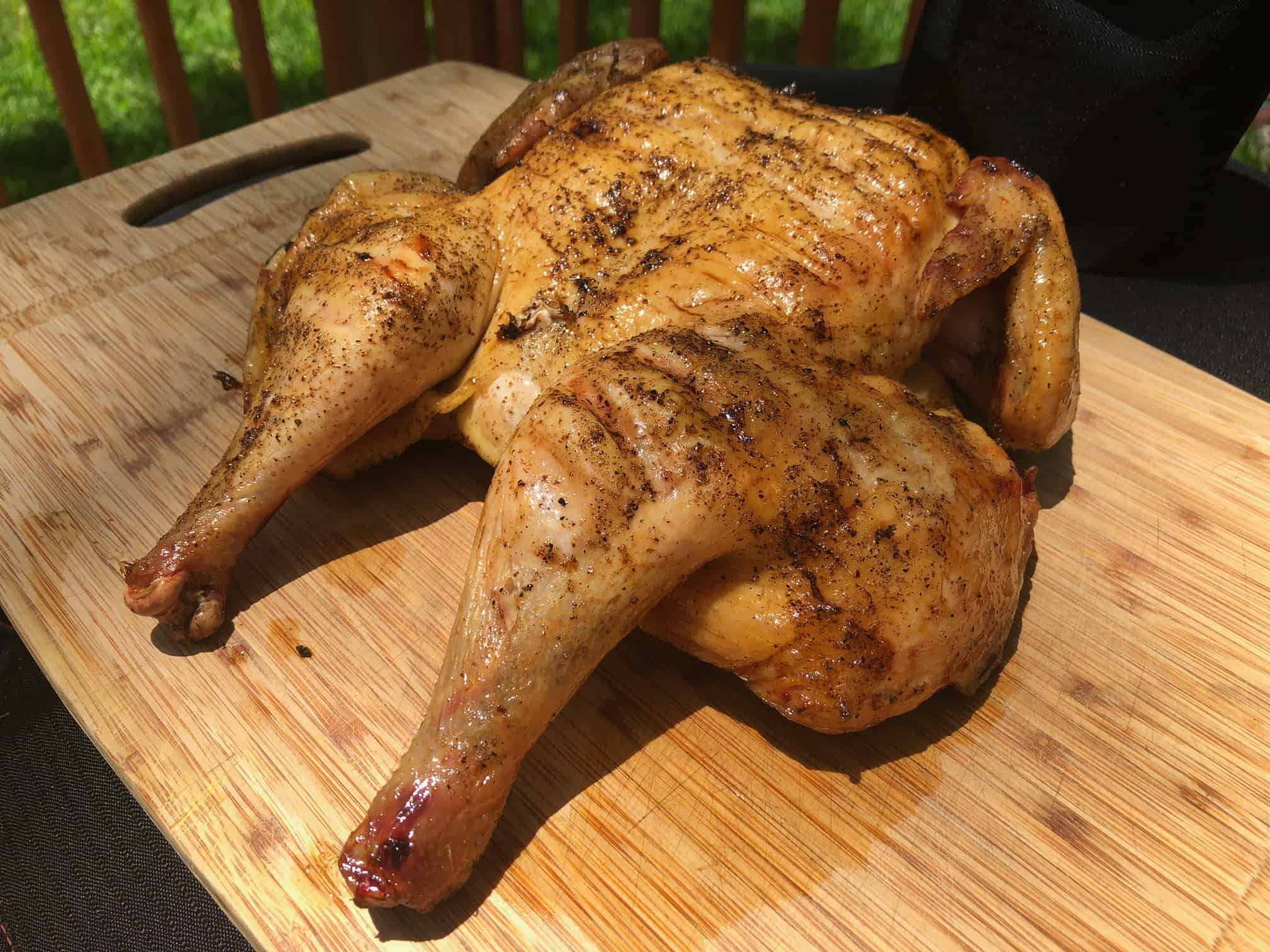 Ideally you want to brine the chicken in the refrigerator for at least four hours and up to overnight if possible. After the chicken has brined, rise it with cold water and pat dry with paper towels.

You are going to start by using a pair of kitchen shears to remove the backbone from the chicken.

Simply cut down one side of the backbone and then do the other side.  Once the backbone is out, flip the chicken over and press down on the keel to flatten the bird.

Here is a nice video that walks you through the spatchcock technique.

Once the bird is prepped I brush it with peanut oil and dust it with pepper.

I cooked this chicken on my Z Grills pellet grill set at 275F using hickory wood pellets.  This recipe works equally fine on a Traeger but if you are cooking on a Pit Boss that does not have a 275F setting then you will need to lower the temperature to 250F and extend the cook time.

I put the chicken on my pit skin side DOWN to get some nice grill marks for presentation.  Because the chicken is flat it will cook much faster than a stuffed whole chicken. 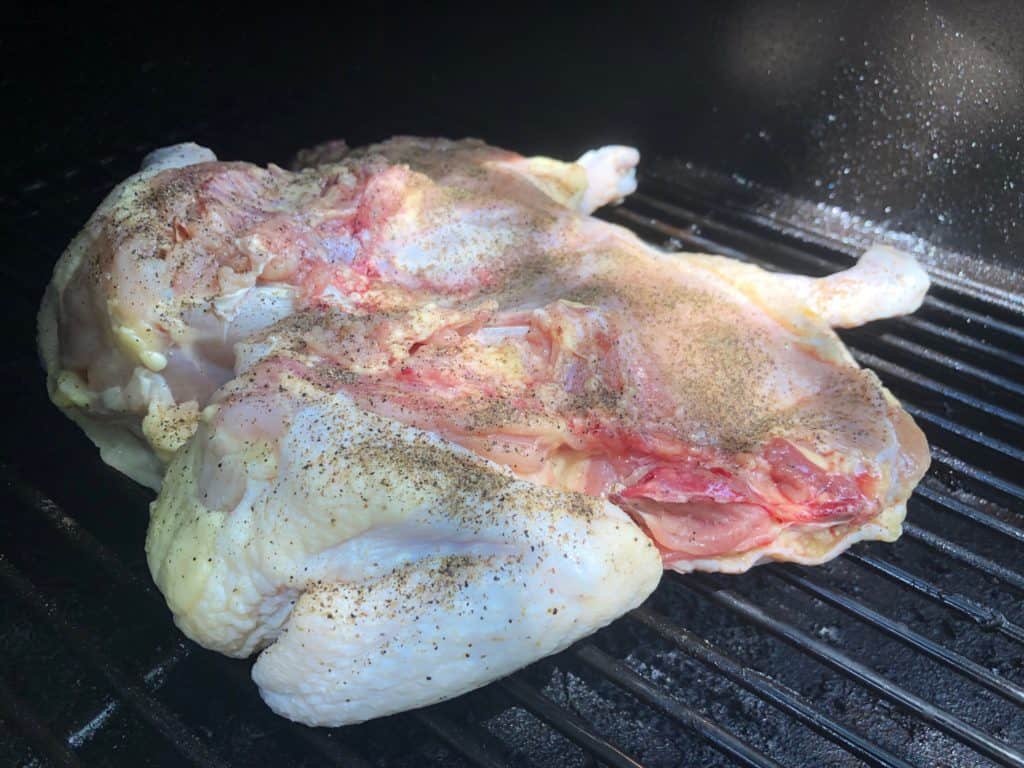 Be careful when you remove the chicken because the legs/thighs are not secured and will sometimes fall off during transfer to a platter. It’s not a big deal if that happens, it just messes up the presentation. 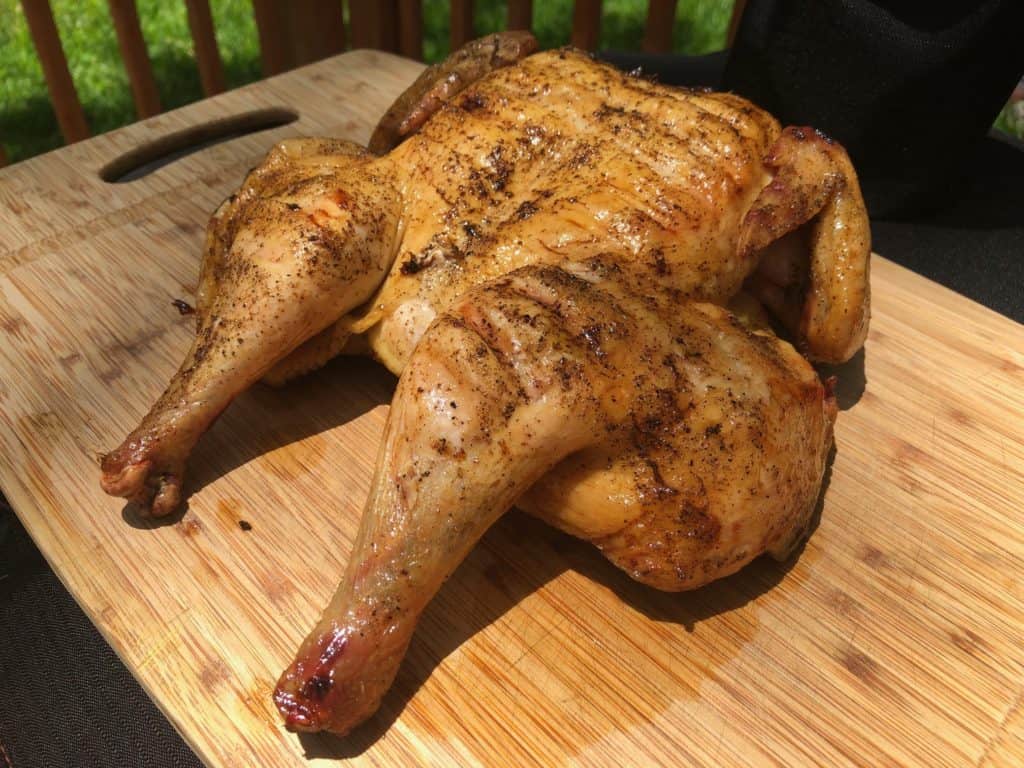 Why Smoke at 275F? I have found this temperature to be the best compromise between speed of cooking while still keeping the meat tender.  If you want to speed up the cook then you can bump the temperature up to 325F but the bird will be a little tougher when finished.

Which Wood Should You Use for Smoke? More important than “which wood” is “how much wood”.  Chicken can be easily overpowered by smoke flavor so it is important to go light on the smoke.  A lot of people use mild fruit wood chips like apple or peach when they smoke a chicken.  I cooked these on a Z pellet grill which naturally produces a light smoke profile.  Since I knew the smoke was going to be mild I went with a combination of oak and hickory.

How Do I Get Crispy Skin on Smoked Chicken? A smoked chicken will never have crispy skin.  What you are shooting for is tender skin that is not rubbery.

Is Pink Chicken Safe to Eat? Be prepared for this question if you intend to smoke a bunch of chicken for a crowd.  The finished smoke chicken will have distinct peak bands around the outer edges of the meat as well as near the bone joints.  The pink coloration is from the smoke.  It is NOT a sign of undercooked chicken.