Here is a simple but amazing recipe for grilling thick cut pork chops on a Weber Q1200 gas grill.  The Weber Q1200 is spectacular little grill and I have had a blast playing with it! 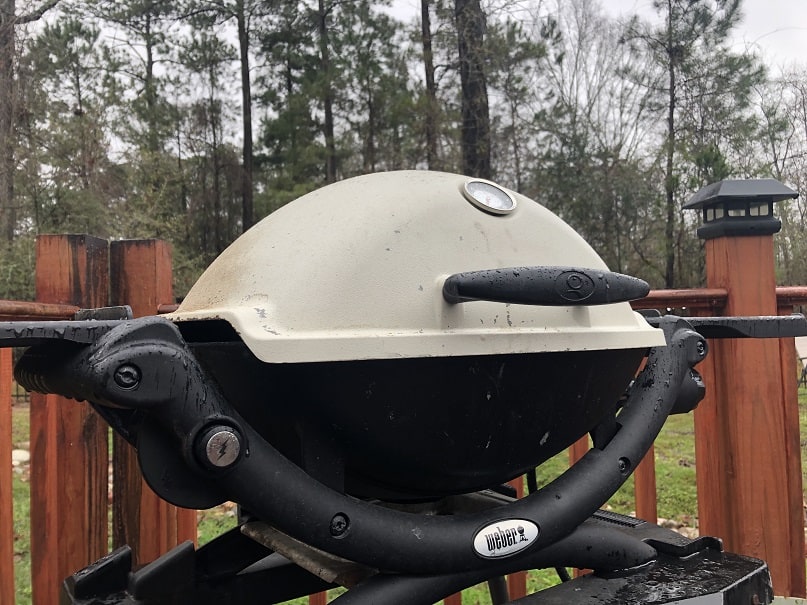 I started with two bone-in thick cut pork chops that I got from Target.  Since we are doing the whole quarantine thing these were bought and delivered by a fine young lady. 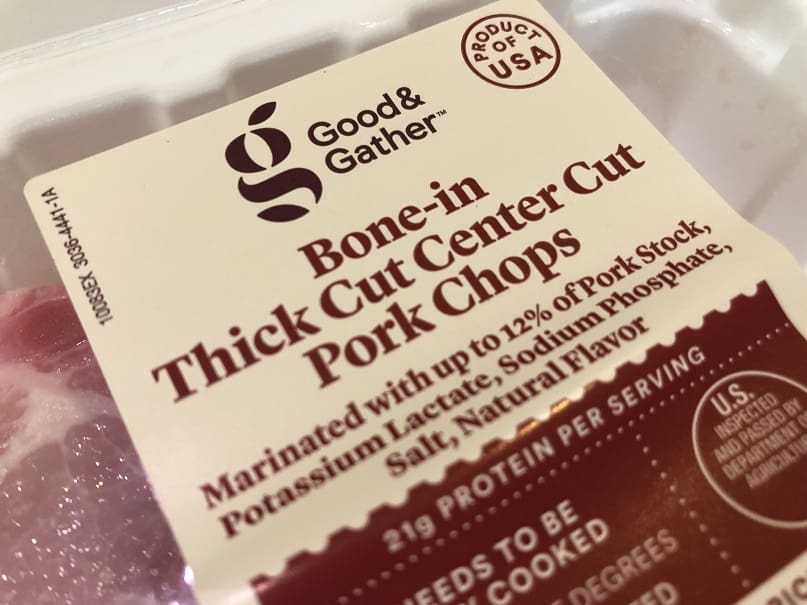 These chops, from the Good & Gather brand, had been marinated/pumped with salt, phosphates and pork stock.  While there are cons to using pork that has been pumped with salt and phosphates one thing that it guarantees is that these were going to be juicy as heck when they came off the grill.

I seasoned the pork chops with a light dusting of Slap ya Momma which is basically a kicked up salt and pepper blend.  You don’t need to use much salt for seasoning since these chops have already soaked in a salty marinade.

After the rub had soaked into the chops for about 15 minutes I slathered both sides of the chops with mayonnaise. The mayo adds another layer of flavor and helps create nice grill marks.

I put these chops onto the Q1200 which had been preheating on High for 20 minutes.  I kept the grill on High for the full cook. 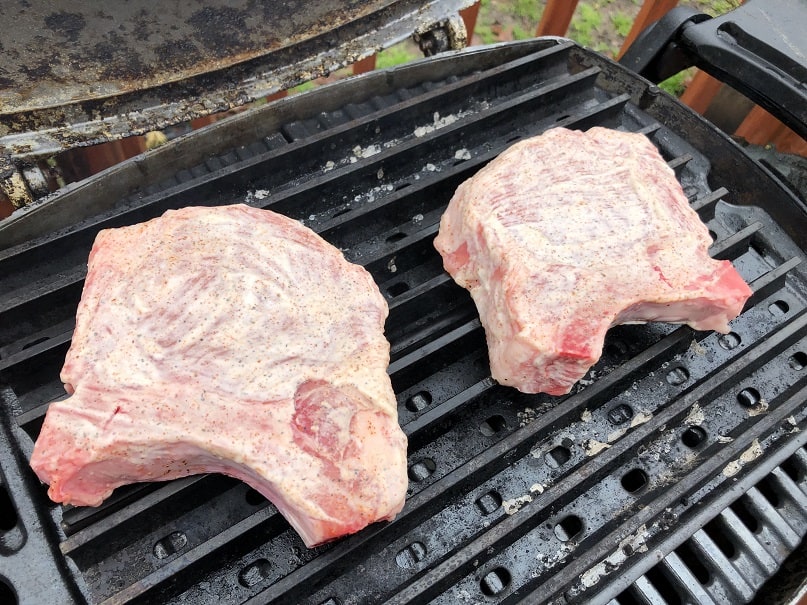 I grilled the chops for two minutes and then turned them 90 degrees and grilled for another two minutes.

I was trying to get some pretty cross hatched grill marks. The marks I got after four minutes were okay but not great.  Next time I will grill for 3 minutes, turn and grill another 3 minutes. 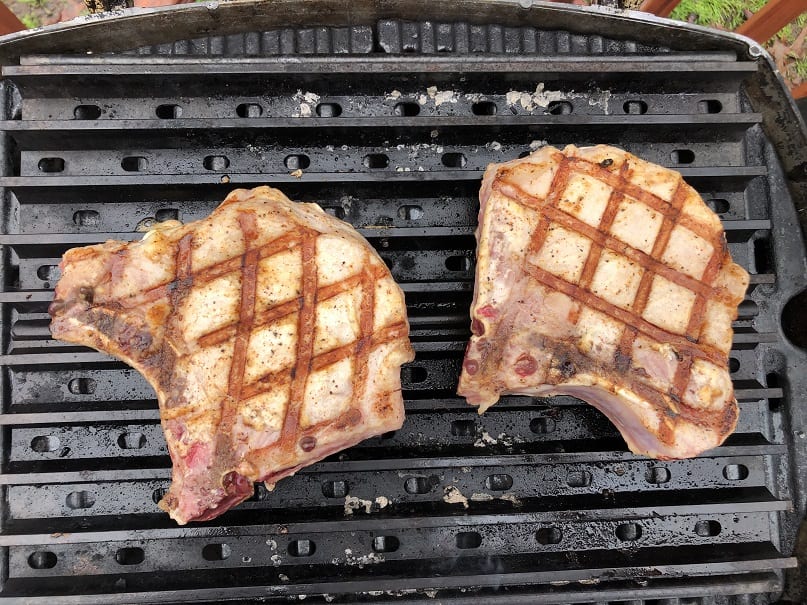 Now that the chops were flipped I let them cook for 10 more minutes.

After 14 minutes of total grilling time the chops had an internal temperature of 130F which was getting close to the target temperature of 145F.  I coated the chops with some Sweet Baby Ray’s Hot and Spicy barbecue sauce, flipped them over and let them finish cooking. 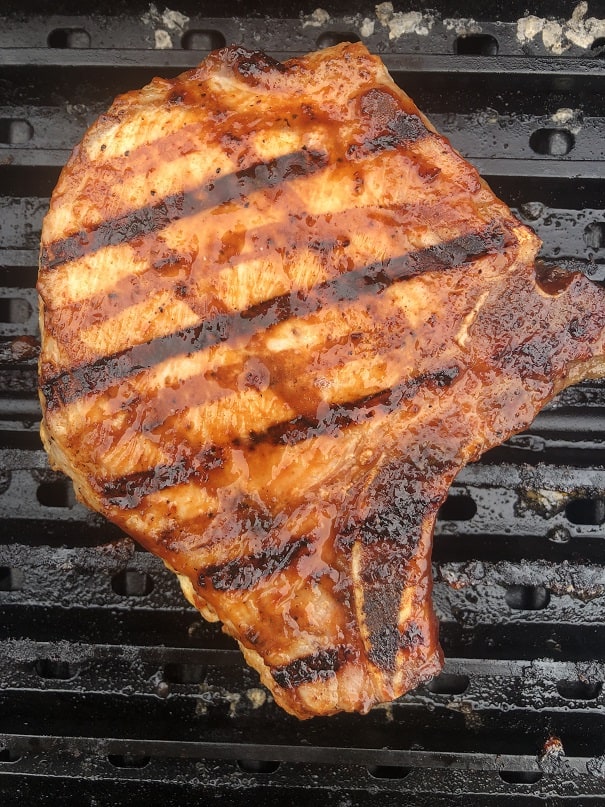 Once the pork chops reached 145F I removed them from the grill and let them rest for about five minutes before slicing.  The total cook time was just under 20 minutes.

I don’t think that it is important to rest the chops…I just didn’t want to burn my fingers!

As expected, these grilled thick cut pork chops were incredibly juicy and delicious!  They had the perfect combination of sweet and salty with just enough heat to grab your attention. 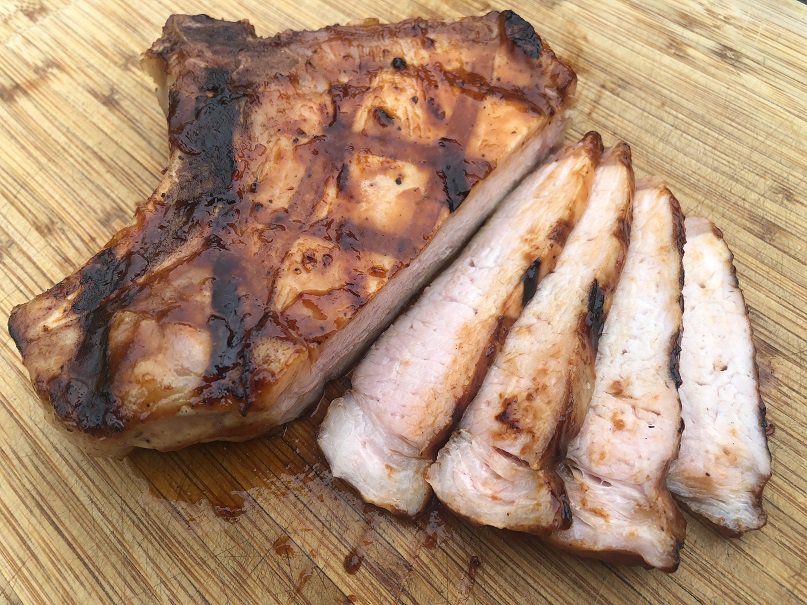 What Would I Do Differently?

These chops were great but I am always looking at ways to improve recipes.  The two things I would like to change next time I make these is to add some smoke and use a different barbecue sauce.

I got the smoke tube from Amazon and it should be here in a day or two.

The second thing I would change is the barbecue sauce.  Sweet Baby Ray’s is tasty but loaded with high fructose corn syrup as well as being incredibly unadventurous.

I bet these chops would be incredible with something like a pineapple jerk sauce or even an Alabama white sauce. I need to seriously up my barbecue sauce game and stop buying the mass produced products that you see all over the place.