Smoking chicken breasts can be a tricky proposition.  Breast meat is extremely lean and will turn into some pretty tough stuff if you take it past its target temperature of 165F.

This quick guide will walk you through how long to smoke chicken breasts under a couple of different scenarios.

I wanted to give you some precise numbers for this guide so I fired up my pellet grill and ran it at two different temperatures, 275F and 325F.

Smoked Chicken Breasts (Bone In and Boneless) at 275F

I inserted the thermometer from the Maverick digital temp probe into the smaller boneless chicken, put them on the pit and kept the lid closed until the boneless chicken reached exactly 165F.

Smoking Chicken Breasts (Bone In and Boneless) at 325F

I repeated the experiment above but had the smoker set to 325F. 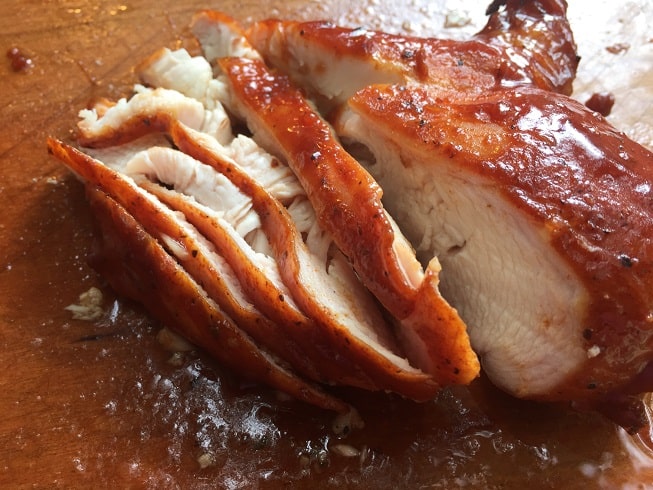 What Temperature is Better for Smoking Chicken Breasts?

Between all four pieces of chicken the absolute best was the boneless breast that had been smoked at 275F.

The chicken pieces smoked at 325F were tougher than those smoked at 275F.  I think the faster cooking made the muscle fibers “seize up” a little.

Between the two breasts smoked at 275F I liked the boneless one better because it was able to take on a little more smoke.  I also liked it because it was easier to slice and wasn’t covered in the rubbery skin that comes with smoking birds at low temperatures.

These results ought to be the same regardless of whether you are cooking on a Traeger pellet grill, Masterbuilt electric smoker or a Weber charcoal kettle.

Want to advertise, work together or give me a hard time?  You can reach me at [email protected]bqDryRubs.com.