Baby back ribs are one of the best things you can put on your smoker!  Baby backs cook up relatively quick and are always a crowd favorite.  The biggest trick with these ribs is figuring out how long they should stay on your pit so you can have everything ready for when you want to eat.

If you are smoking baby back ribs at 225F then plan on cooking them for five hours.  This time will vary by 30 minutes in either direction depending upon how big the ribs are and whether or not you wrap them in foil.

Let me walk you through a cook where I timed how long it took a couple of racks of ribs to get finished.  For the cook I was working with two slabs of ribs that weighed a little over three pounds each.  One slab was finished in four and a half hours while the other slab took five and a half hours.

Cook Times at 225F for Unwrapped and Foiled Baby Back Ribs

I seasoned two racks of baby back ribs with a dry rub and smoked them for three hours at 225F.  At the three hour mark the meat had started to pull back from the bone and the ribs had some nice color.

One slab of ribs was taken off of the smoker in wrapped it in aluminum foil along with some Parkay, honey, brown sugar and apple juice. 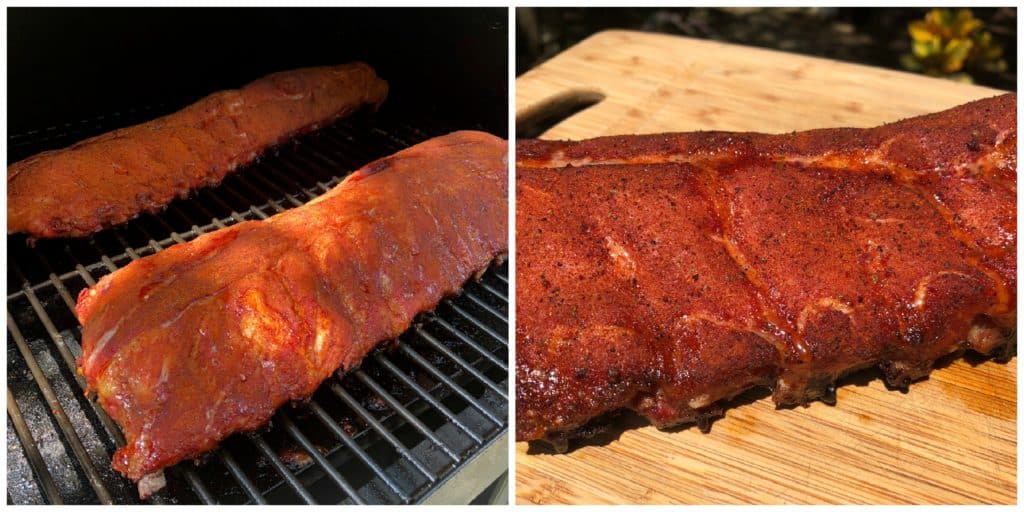 The foiled ribs were returned to the smoker along side the other slab where they cooked for another hour.

At the four hour mark I took the ribs out of the foil, painted them with some barbecue sauce and put them back on the pit. 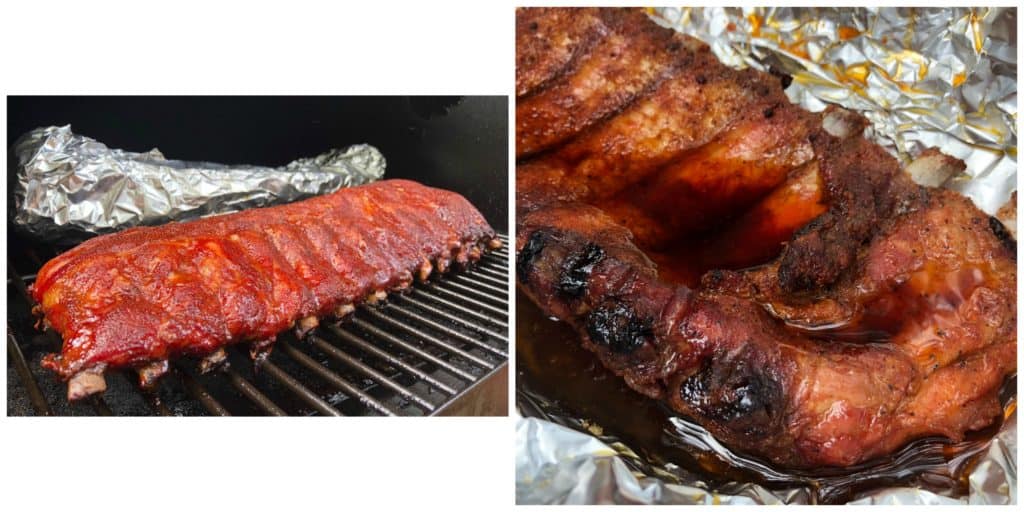 After another 30 minutes the ribs that had been in the foil were done for a total cook time of four and a half hours.

You can tell when the ribs are done by using a toothpick.  If the toothpick can slide through the meat with no resistance then they are ready to eat!  These ribs were “bite through” tender.

The second slab of ribs stayed on the smoker for another hour.  I cooked this slab until a toothpick slid through the meat and the slab almost fell apart when being lifted with some tongs.

These unwrapped baby back ribs were “fall off the bone” tender and took five and a half hours to smoke.

For a more detailed recipe check out this post for 2-2-1 baby Back ribs on a Pellet Grill!

Now that you have seen what I did let’s talk about why your ribs will probably be different.

Factors That Influence Baby Back Smoke Times at 225F

The four main factors that determine how long it will take the ribs to finish cooking are:

The Size of the Ribs Matters

Some purists insist that to really be a baby back rib that the slab cannot weigh more than two and a half pounds.  Purists aside, there are many stores that sell “extra meaty” baby backs that weigh in at over four pounds per slab.

Using Aluminum Foil Speeds Up How Fast the Ribs Cook

Wrapping the ribs in foil has benefits and drawbacks.

Wrapping speeds up the cook, protects the ribs from getting too much smoke and allows you to add more flavors in the foil pouch.  On the downside, you can lose a lot of your surface bark, it is easy to scald yourself when you open the pouch and it sometimes feels like cheating.

Based on the benefits and drawbacks there is a lot of variation in how people foil their ribs.

Some folks like to foil sooner and longer to get the ribs done faster.  One variation is to foil at the two hour mark, cook them in the foil for 90 minutes and let them finish up uncovered for another 30 minutes.  This would give you a cook time of right at four hours.

How Tender Do You Want Your Baby Back Ribs?

The “right” tenderness for ribs is a battle between ribs that are “bite through” or “fall off the bone” tender.

A “bite through” rib will have just a little bit of tug to it when you bite in.  The bite of meat will cleanly pull away from the bone and the remaining meat will stay intact.  This is the standard tenderness required in KCBS barbecue contests.

You can keep cooking your ribs after they hit the “bite through” stage until the slab just about falls apart on your pit.  The ribs will be melt in your mouth tender and will completely fall off the bone at some point between slicing and your second bite.

KCBS folks will tell you that “fall of the bones” ribs are over cooked and ruined.  The other 99% of the world’s population prefer the ribs that are the most tender.

We have been talking about smoking ribs at 225F but there is a lot of debate over what is the optimum temperature for rib smoking.

Why does temperature matter?

So while it might make sense to smoke ribs at as low a temperature as possible that also runs into problems.

The trade off between the speed of the cook and tenderness of the final product is what gets people dialed into the 225-250F range.

I have smoked ribs at both 225 and 250F and the only real difference that I have noticed is that the 250F ribs get done faster by 30-45 minutes.

Tips for Better Baby Back Ribs

Go Easy on the Smoke:  Baby backs are a mild flavored piece of pork that is easily overwhelmed by too much smoke.  Shoot for ribs that have been kissed by smoke instead of smothered.

Use the Right Woods:  The best wood flavors for smoking ribs come from fruit wood such as apple, peach and cherry.  Wood like hickory and pecan can overwhelm ribs and make the a little bitter.

Serve Sauce: A lot of folks will tell you that great barbecue doesn’t need sauce.  Those folks might be right but that doesn’t change that many folks love barbecue sauce and would appreciate it being served.  Serving great barbecue is about making your guests happy, not stroking your own ego.

Sweet Heat: Ribs are excellent with a Sweet Heat flavor profile.  On your next cook put on an extra slab and brush it with melted pepper jelly about 30 minutes before it is time to take them off your pit.  You might be surprised by how much you like them!