Baton Rouge in the summer is a funky place.  Between the searing heat and completely random summer thunderstorms the weather has forced me to spend a lot of time in the kitchen.

I spent the time making batch upon batch of homemade bbq sauce trying to find recipes that were different than anything I could get at the store.  The project was a lot of fun and all came together over the past few days when the weather broke and I got to do some field trials with my grills.

I threw a lot of recipes down the drain (not a fan of pineapple in sauces) but found a few that were absolute winners.  Here are five of my favorite homemade bbq sauce recipes; I hope you enjoy! 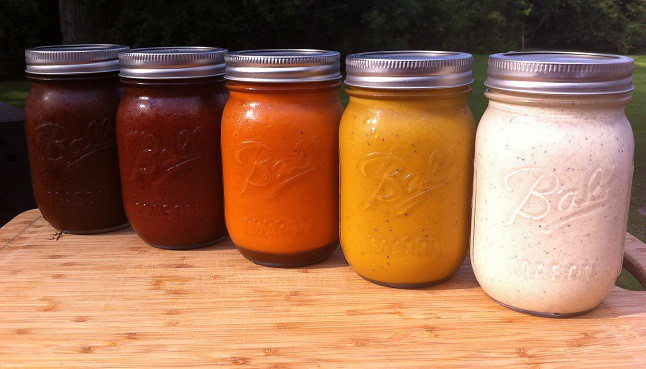 Coffee and grilling are two of the things that make me happy so of course I had to put these guys together. 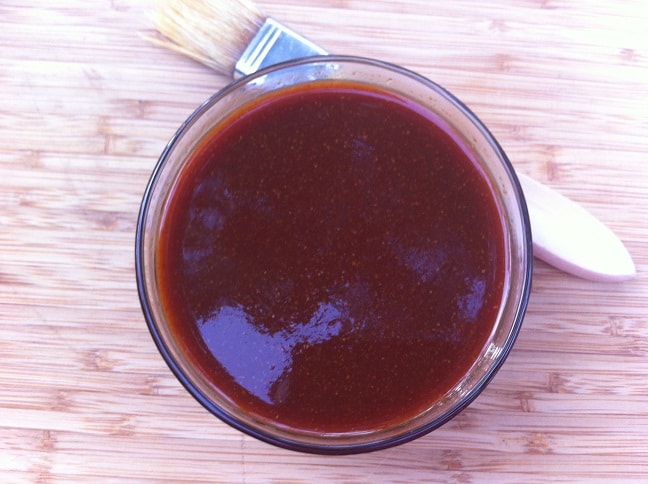 This homemade bbq sauce is excellent with beef and a little too powerful for anything else.  You can use this both as a marinade and as a basting sauce.

The brown sugar adds a nice balance to the bitter coffee and the ancho + chili powder combination really pops with beef.  I used this as a basting sauce while grilling some Flanken cut beef short ribs.  I was using high heat and didn’t have any problem with the sugar scorching.  The flavor was outstanding. 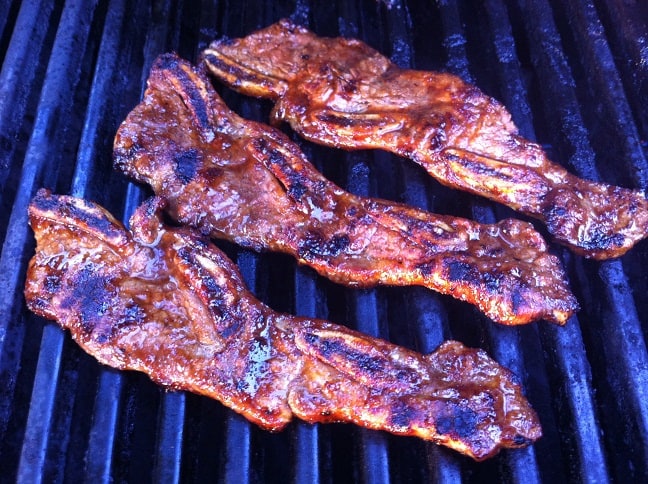 I would not hesitate to use this as a marinade for tri-tip, chuck roast or brisket.

This homemade bbq sauce is on the thin side and the solids will settle to the bottom of the jar so make sure you shake it up before using.

The key with this bbq sauce is to use it either before or while you are grilling so the sauce has time to work into the beef.  You don’t want to use this as a standalone dipping sauce.

Morning Brew Homemade BBQ Sauce Recipe: Bring all ingredients to a boil then simmer for 15-20 minutes.  Stir often to keep solids from settling to the bottom of the pan and burning. 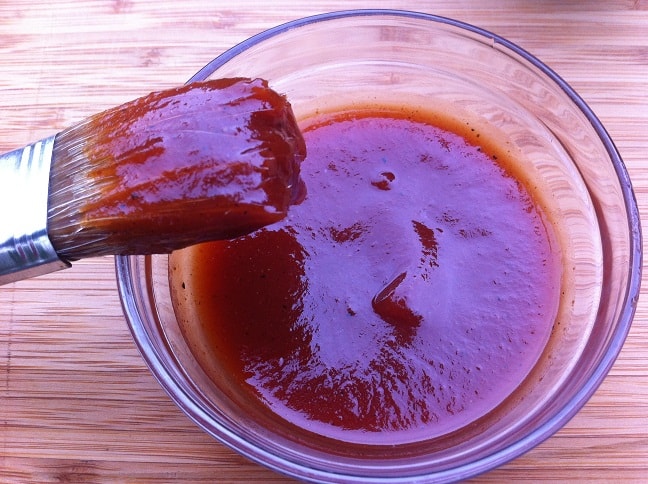 I was grilling chicken thighs and brushed this sauce on a few minutes before the chicken was done.  You don’t want to put this sauce on too early as it will scorch pretty easy.  This has a great color and a flavor to match. 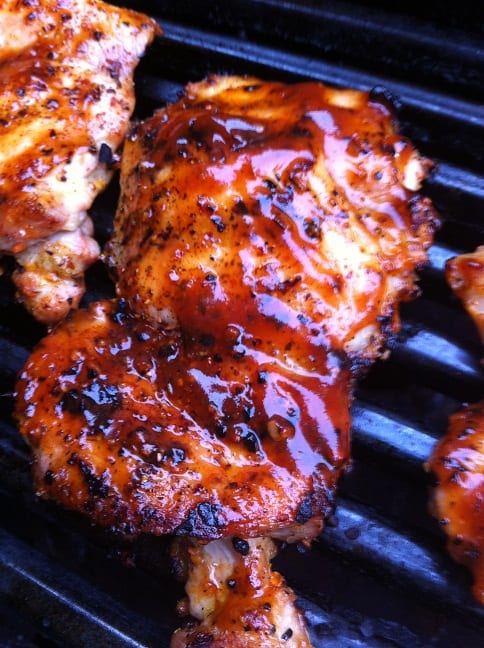 I mixed this bbq sauce 1:1 with some Louisiana hot sauce and made a mighty fine sauce for some grilled hot wings. 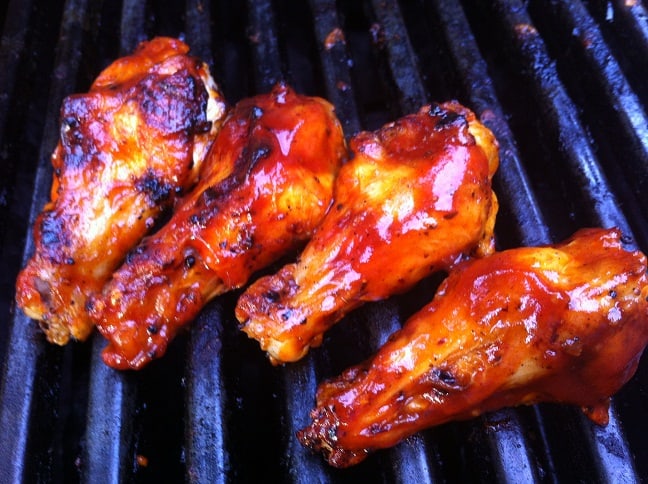 This bbq sauce is delicious hot or cold and can be used as a standalone dipping sauce.  This will work great with chicken and pork and would be a nice addition to a grilled hamburger.

Better than Kraft Homemade BBQ Sauce Recipe:  Bring all ingredients to a boil then simmer for 15-20 minutes.

Butter is the star of this silky bbq sauce and this stuff is dangerous.  We were eating this by the spoonful and that’s only because we were too embarrassed to use straws. 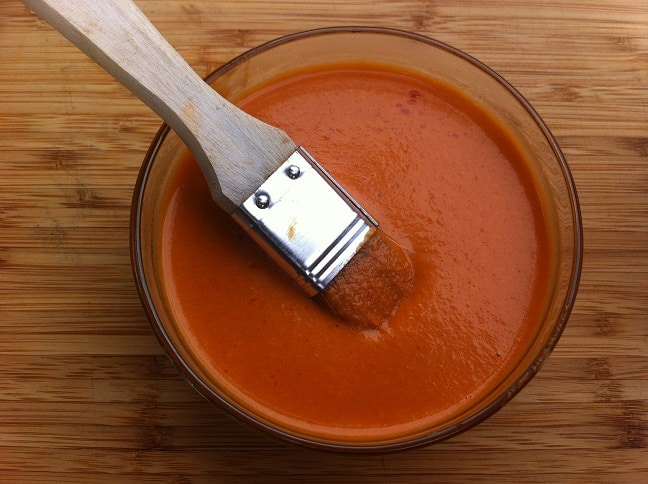 There isn’t much sugar in this bbq sauce so you can use it as a marinade or as a basting sauce and not worry about the sauce scorching.

The first time I used this bbq sauce I brushed it onto some thin cut pork chops I was grilling over high heat.  The color on the chops was incredible and the bbq sauce was the star of the show.

Have a dish of this bbq sauce on the side and you will be dipping everything into it. 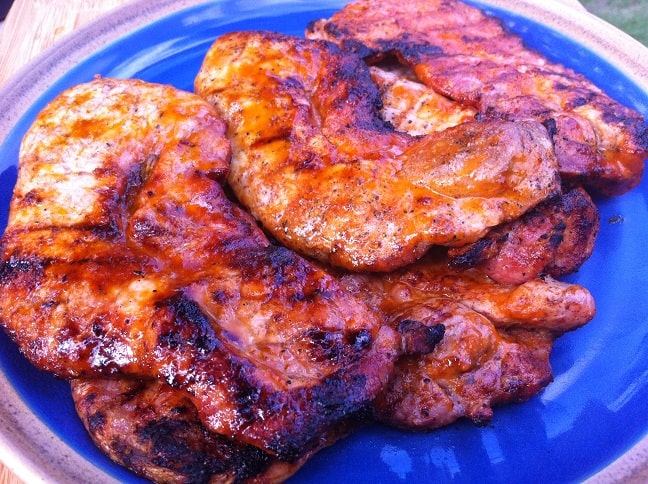 I used this sauce as a marinade for some chicken thighs (four hours) and grilled them up over direct heat.  The results were even better than with the pork chops. 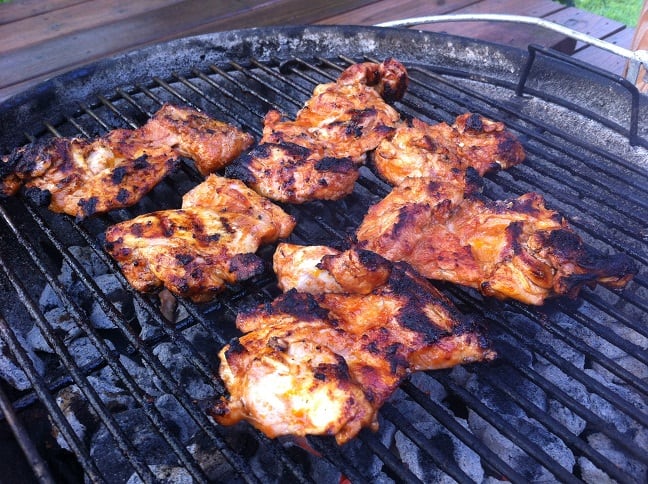 In order for this homemade bbq sauce to completely come together I had to use a hand blender.  When I was simmering the bbq sauce the vegetable oil separated from the tomato base and no amount of whisking would fix the problem.  I busted out my hand blender and 30 seconds of pulsing created a beautiful emulsion that held nicely.

I need to give plenty of credit to Paul Kirk as this bbq sauce is an adaptation of his Kansas City Rib Doctor Chicken Sauce (pg 170, Paul Kirk’s Championship Barbecue Sauces

Freaking Awesome Homemade BBQ Sauce Recipe: Bring all ingredients to a boil and simmer for 15-20 minutes.  Process with a hand blender to emulsify.

This homemade bbq sauce will not be a hit with everyone but certain people will love it!  The flavor of this bbq sauce is similar to honey mustard and is a variation on the classic Carolina mustard bbq sauce. 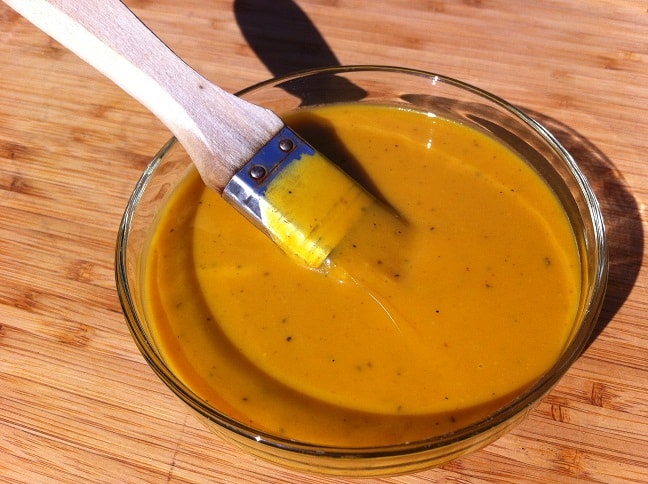 I haven’t had the pleasure of sampling a mustard bbq sauce in the Carolinas so I can’t speak to how close to authentic I got with this recipe.  I can tell you that it went great with some pulled pork and would be an excellent dip for pretzels and French fries. 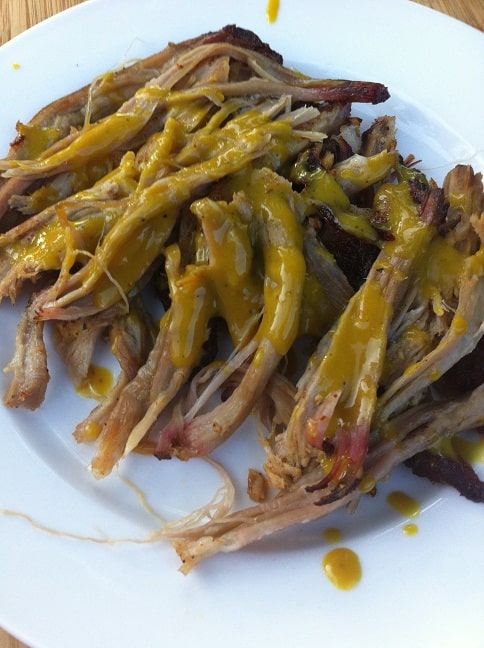 Marvelous Mustard Homemade BBQ Sauce Recipe: Bring all ingredients to a boil and simmer for 15-20 minutes.

There was no way I could write about homemade bbq sauce and not include something about an Alabama white sauce.  I have never seen anything close to this in a grocery so making it yourself is the only route to go. 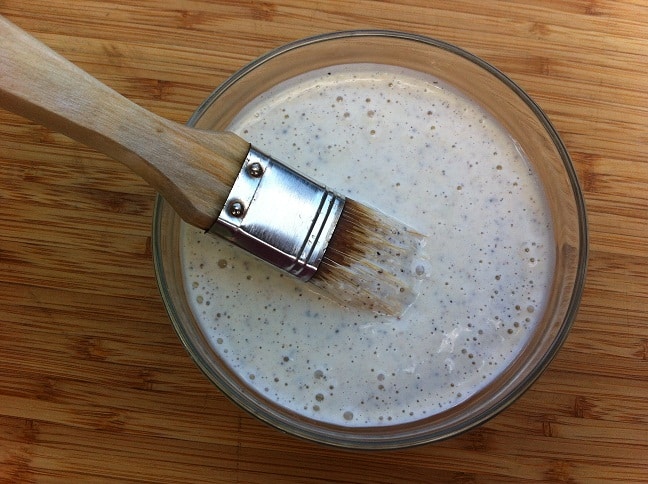 The flavor of this bbq sauce if extremely similar to Ranch dressing and is traditionally used to coat grilled chicken.  I can happily report that chicken and white bbq sauce is an excellent combination! 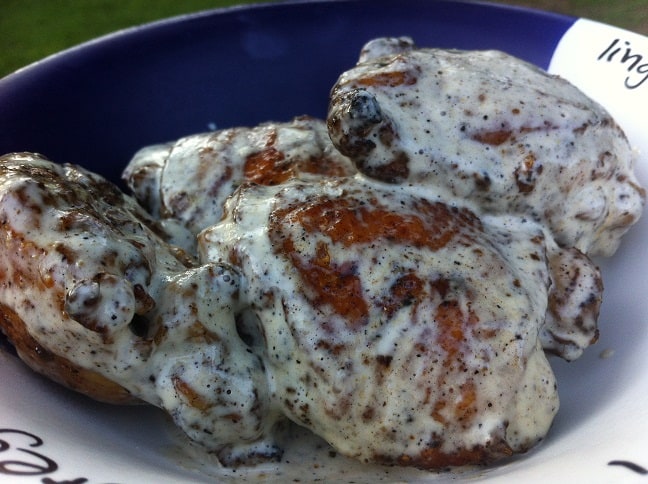 This is another homemade bbq sauce that is much easier to make with a hand blender.  I simply loaded all of the ingredients into the “smoothie cup” that came with mine and blended for a minute until all lumps were gone.  A whisk will work just fine for bringing this bbq sauce together but the hand blender is much more fun.

Alabama White Homemade BBQ Sauce Recipe:  Whisk or blend all ingredients until well incorporated then let rest in the refrigerator for at least an hour allowing the flavors to marry. 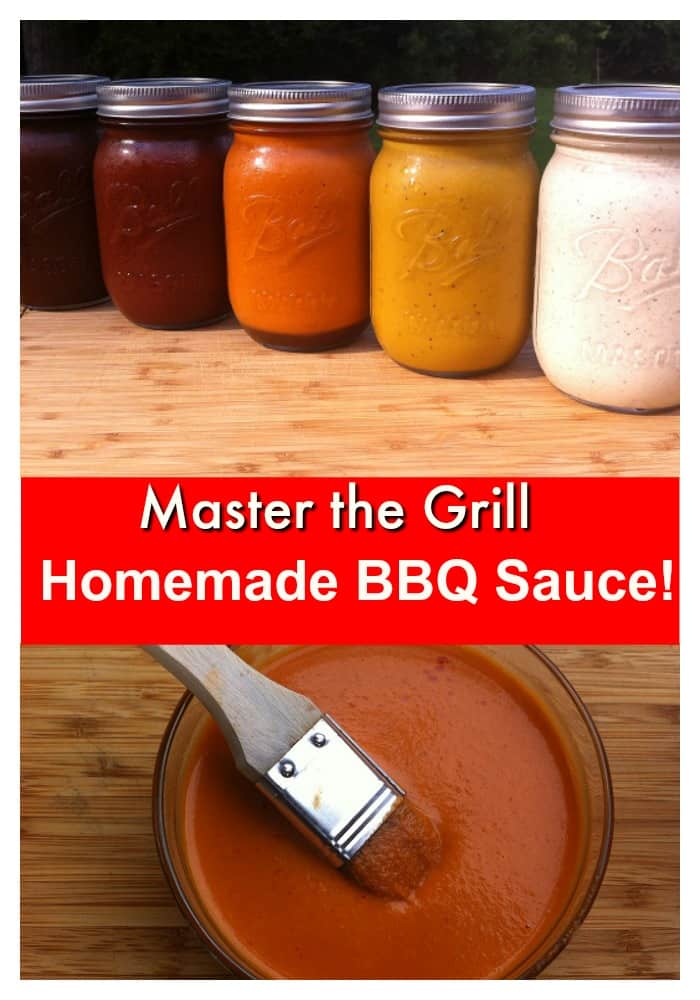