Let’s take a look at the techniques used to make the best grilled ribeye steak worthy of winning $1,000.  This post is a breakdown of the techniques used by two different grill masters who have won championships through Steak Cookoff Association sanctioned events. 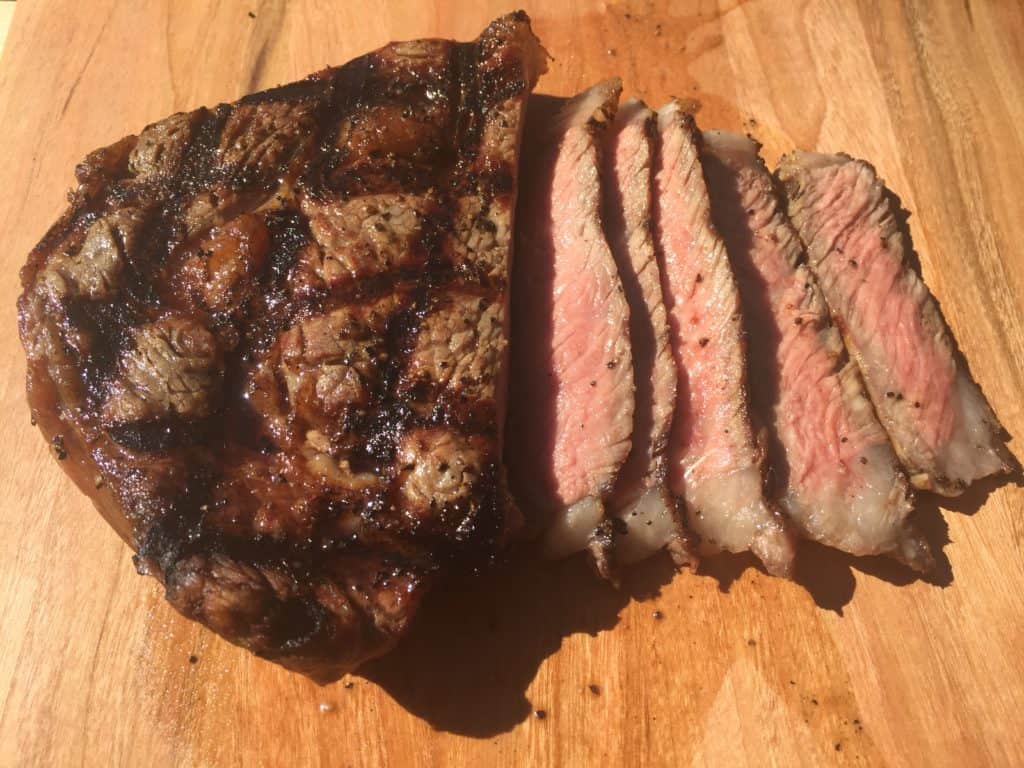 If you are not familiar with the Steak Cookoff Association and their events let me give you a quick rundown.

Teams are provided with two ribeyes that are a little over an inch thick and weigh approximately one pound.  The cooks have three hours to trim, season and grill the steaks.  Any type of grill can be used to cook the steaks.

The teams have a 30 minute window to turn in the finished steaks which must be presented in an ungarnished Styrofoam container.  The ribeyes are judged based upon Taste, Doneness, Texture, Appearance and Overall Impression.

The winner of the event typically takes home a check for over $1,000.

So, with over a thousand bucks on the line, how do the professionals grill their ribeyes?

Summary: The Killer Hogs barbecue team is composed of brothers Malcom and Waylon Reed.  They have a great YouTube channel (make sure to subscribe) and an awesome website.  Malcolm is cooking over Royal Oak briquettes and using cherry wood.

There are a lot of details about how Malcolm trims the steak, how much seasoning to use, etc. in his video below.

Summary: Darien, aka Kosmo, won the World Steak Championship in 2015.  He has a great line of steak seasonings, barbecue rubs, sauces, etc for sale over at KosmosQ.com.  This is a 7-8 minutes cook.  Kosmo is cooking over Kingsford briquettes and using hickory wood. Kosmo also has an awesome YouTube channel so make sure you subscribe.

Kosmo has shared a couple of different variations on how to grill a ribeye.  What follows is a summary of his general framework.

Apply a salt based rub and let the steak rest for at least 30 minutes.

While there is a lot of variation in those options the key components are consistent.  Get some salt on that steak at least 30 minutes before you start cooking.  Add in some other flavors (black pepper and garlic work great) and include something with a little bit of heat.

While the steak is resting heat your grill to at least 600F.

Cook steak for 1:15 then rotate by 45 degrees.  Cook for another 1:15 and then flip the steak and baste with melted butter. Rotate the steak by 45 degrees and start measuring the internal temperature.

After the steaks have rested, season with a sprinkle of Himalayan salt.

Here is Kosmo’s backyard video.  It is fun to watch and there are lots of tiny details that you can learn better by seeing than reading.

Here is a great video showing you exactly what an SCA event looks like.  The video is a blast.

You can find Kosmo’s products here.

Let’s take Malcolm’s and Kosmo’s techniques and smash them together!

Master Recipe for How to Grill Ribeye Steak

A key aspect of both Malcolm’s and Kosmos’s technique is the use of GrillGrate grill panels.  The most OBVIOUS reason people use GrillGrates is to get those amazing grill marks.  However, grill marks are not the most IMPORTANT reason to use GrillGrates.

GrillGrates are important because they heat evenly and transfer that heat to your steak through infrared energy. This lets the steak cook faster and more evenly.  GrillGrates are also important because they prevent flareups.  If you try grilling a fatty steak like a ribeye directly over a pile of scorching charcoal then you are going to end up with dripping grease catching on fire.

Some steak lovers think grill marks are useless and over rated and prefer a caramelized crust on their ribeyes.  Even these folks use GrillGrates.  They just flip the GrillGrates over and grill on the flat side.  If you are interested then here is my full GrillGrate review that I wrote a few years ago.

You can use this recipe without GrillGrates but you have to really keep an eye on things and make sure that the steak doesn’t burn.