I was scrolling through some old posts on this site and realized that I had a tasty and inexpensive recipe that had gotten lost in the shuffle.  I figured that this recipe for grilled pork sirloin tip steaks was worth republishing and getting a post all for itself!

I was working with the four pack of pork roasts from Costco.  These roasts are nice because they have already been pumped with a pork brine which saves some time on my end.

I took a couple of these pork roasts and smoked them but I think they were much better when grilled.

Here is what I did.

Start with a 2 pound roast and slice it, across the grain, into one inch thick steaks.  I was able to get five steaks from a roast but I have to admit that the last one looked kind of funky.

Actually, these are going to end up looking more like thick cut pork chops than steaks..but hey…you get the idea.

Season the chops/steaks with a sweet and spicy rub and let the rub melt into the pork for 30 minutes before grilling.  I went with a low salt rub since the pork had already been brined.  This rub has a high sugar content so I didn’t use very much on each steak, just enough to lay down some color and help get some grill marks.

Set up your grill for direct high heat (~500F).  If you want crazy grill marks then be sure to use a set of GrillGrate panels.

Baste the pork with melted butter and serve 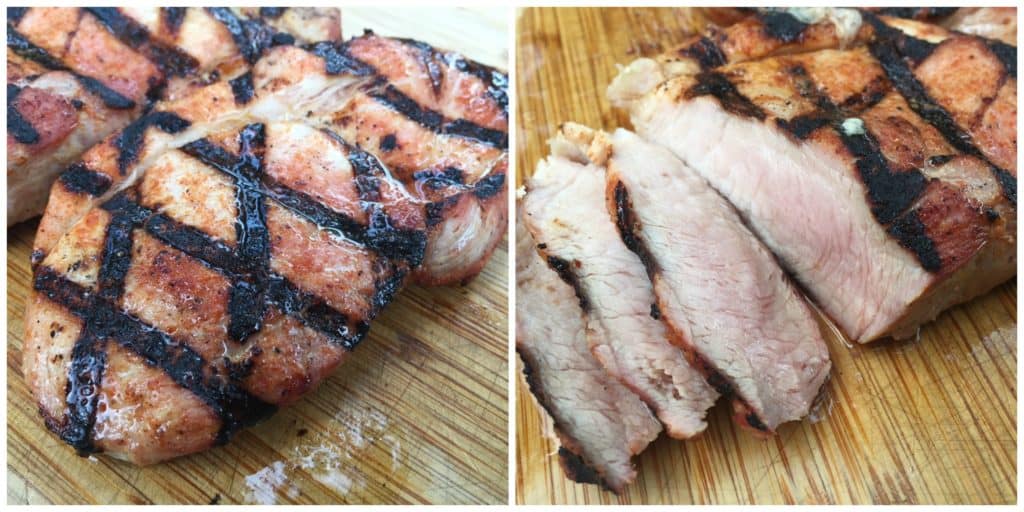 These grilled pork steaks turned out great and were my favorite way of cooking the pork sirloin tip roasts that I got at Costco.

If you are working with a roast that has not been brined then you should take a few hours and perform that step yourself. Brining really helps this cut stay juicy and tender while being grilled at high heat.