One way of stepping up your brisket game that doesn’t get much attention is to dry age your brisket.  Dry ageing has been used by the best steakhouses in the country for decades to transform beef that is already great into beef that is spectacular.

If dry ageing works wonders on steaks then it stands to reason that it would be equally great for briskets. 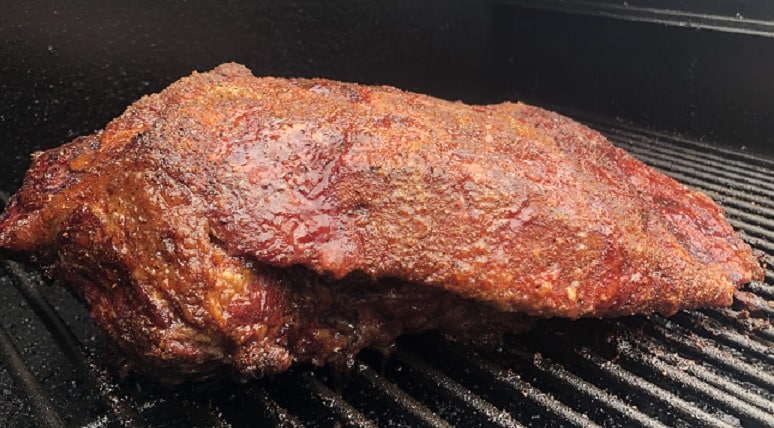 Despite the obvious connection that dry aging should make a spectacular brisket you will see very little mention of the technique in the barbecue community.  I think there are a couple of reasons that this technique has been overlooked; complexity and competitions.

Until a few years ago it was just about impossible to dry age a brisket at home without investing in a drying chamber that had both temperature and humidity control.  Steakhouses have entire rooms that have these parameters controlled so they can perform dry aging on a large scale but there simply wasn’t an easy solution for home use.

A few years ago a new product, the Umai bag, came to market that is specifically designed to make it EASY for people to dry age meat, including briskets, at home.   The Umai bag looks like a standard vacuum seal bag but is designed from a special polymer that lets small molecules like water and oxygen pass through the bag but prevents larger molecules that cause contamination and spoilage from passing in.

A lot of what gets talked about in the barbecue community is a reflection of what is happening on the competition barbecue circuit.  For example, when people see that Myron Mixon just won $10,000 with his brisket recipe then they start talking about how to cook Hot and Fast like Myron Mixon.  The problem is that KCBS barbecue competitions have rules and the presence of the rules restricts what the top cooks can do.

Since you can’t use a dry aged brisket at the major barbecue competitions the technique hasn’t generated much attention in the general barbecue community.

What Is Dry Aging

Dry aging is the process of letting beef sit in controlled temperature/humidity conditions for a prolonged period of time.  During this time the enzymes in the meat start to break the meat down creating a different texture and flavor.  Simultaneously, water is evaporating from the meat which concentrates the beefy flavor.

The resulting beef has a distinct flavor that is loved by many but is too strong for others.  Some of the words used to describe the flavor of dry aged beef are “nutty”, “Parmesan cheese”, “mushrooms” and “earthy”.  The longer the beef is dry aged the stronger these flavors become.  Think of it this way, if you love blue cheese then you will probably love dry aged beef.

How Long Should You Dry Age A Brisket?

While there isn’t a lot of data about the sweet spot for how long to dry age a brisket there is plenty of information when it comes to dry aging steaks.  It is agreed that you start to get the benefits of dry aging after 28-30 days but that the flavors really kick into high gear after 45 days.

Here is a video from Ballistic BBQ that covers smoking a 30 day dry aged brisket.  The brisket he started with was a little too small so part of the point dried out.  The big takeaways from this video:

Here is a brisket that has been dry aged for 45 days from Jaxx Drinkwater Southern Cooking and BBQ. He ended up wrapping the brisket in butcher paper and pulled it from the pit when the internal temperatures were in the 195F range.

He doesn’t give a lot of flavor profile information but it does sound like he was delighted with the results.  Again, the brisket was incredible juicy despite being dry aged for 45 days.

Here is Round 2 from Ballistic BBQ.  On this attempt he went with a much larger brisket and aged for 63 days.  After 63 days of aging the brisket had about a 33% weight loss but still turned out incredibly juicy.  Check out the 9:45 mark and you will see a RIVER of juice.

Greg says that the flavor has not turned “funky” yet but that he would not age past 63 days in the future.  He says that he has now tried 30 days and 63 days and if he does it again then 45 days will be the target.

Last up is a brisket that has been dry aged for 75 days from FOGO Charcoal.

I love this video.  When they get to the tasting you can tell that some serious flavor development has occurred.  They are talking about mushrooms, cheese, and a little bit of funk.  This is a flavor profile that some folks absolutely freaking love but others are not so comfortable with.

Have you tried dry aging a brisket at home?  How did it go? Would you do it again?

Drop a note in the comments below.  I would love to hear your thoughts!