The difference between a backyard cooks version of pulled pork and what you find at a Kansas City Barbecue Association (KCBS) competition are night and days apart.  When there is serious cash on the line the professionals pull out all the stops to make sure their pulled pork stands out from the crowd.

Keep reading and learn about the “money muscle”, how the pork butts gets trimmed as well as what injections, rubs and sauces the professionals use!

The first step is prepping a pork butt is the trim.  There are several things cooks are working to accomplish when they are trimming a butt.  They want to:

“PORK: Pork is defined as Boston Butt, Boston Roast, Picnic and/or
Whole Shoulder, weighing a minimum of four (4) pounds at the
time of inspection. After trimming, pork shall be cooked whole
(bone in or bone out), however, once cooked, it may be separated
and returned to the cooker at the cook’s discretion. It may be
turned in chopped, pulled, chunked, sliced or a combination of any
of those.”

There is a lot of information packed into those three sentences that influence how the butt gets trimmed.

The first thing to look at is that the butt must weigh at least four pounds.  Many butts have weights in the 8-10 pound range and the four pound minimum lets cooks get highly aggressive in how they trim. Any surface fat, silverskin, or dangling pieces of meat get tossed.  For many cooks any piece of meat that is not targeted for the turn in box gets tossed as well.  When you trim a 10 pound butt down to a sculpted 5 pound pork butterfly you also get the benefit of a faster cook time.

The second thing to notice is that you are allowed to turn in pork that is pulled, sliced, chopped or chunked.  Teams that want to show they have mastered this cut will try to turn in a box that contains at least three of the variations. Teams will trim the butt to expose the different sections accordingly.  Sliced pork will come from the Money Muscle, chunked pork will come from the Horn section and pulled is typically taken from the Tubes in the middle of the butt.

The last thing to look at is that the butt must be cooked whole.  The problem this creates is that different sections of the butt cook at different rates.  Teams for an answer for this problem as well and it typically involves cooking multiple butts and pulling them at different points.

Here is a GREAT video from the Piggin’ Whiskey barbecue team that shows exactly where the Money Muscle is located and how the butterfly the butt so each section gets maximum exposure for rubs and smoke.  You will be amazed at how he turns a standard pork butt into something that wins contests.

One of the things that makes competition barbecue so interesting is how differently teams approach each meat.  For example, while Piggin Whiskey opens up the butt as much as possible the Three Time World Championship winning Fatboys BBQ team takes the exact opposite approach.

Fatboys BBQ takes the bone out of the butt and then trims it so just the outside edge of the money muscle is exposed. The butt is squared off and is close to the four pound weight limit.  Here is the video where Corey Mikes shows the Fatboy’s technique in action.  You should watch the video as they also teach you about the FALSE money muscle and why you want to cut it off.

Corey has an online barbecue school that he mentions in the video.  If you want to learn all of the secrets of a Three Time World Championship winning barbecue team then you can enroll here.

If you are interested in upping your game even more then check out this article on smoking a whole pork shoulder!

After the butt has been trimmed the next step is to pump it up with a competition pork injection.  Using an injection has the following benefits:

There are multiple pork injections on the market and the most popular are from:

Some of these products are powders that you have to mix with water or apple juice while others are either ready to use or are concentrates.

Here is a useful video from Harry Soo from Slap Yo Daddy Barbecue doing a head to head comparison of all six of the most popular pork injections.  Harry cut the money muscle from six different pork butts and injected each one with a different product.  The takeaway from the video is that all six injections are excellent and which one you should use depends upon what flavor profile you are shooting for.

After the butt has been injected it gets patted dry and covered in a dry rub.  You want to get the surface of the butt dry from any excess or leaked injection so the rub does not clump.

What Are the Best Dry Rubs for Competition Pork?

There is not a single dry rub that dominates on the competition circuit.  The most common flavor profile I see teams using is “Sweet Heat”.  To get the sweet heat profile they will either use multiple rubs and apply them in layers or take a typical spicy rub and mix it with brown sugar.

Here are some of the common rubs teams use as a starting point.

Here is a recipe for a pork dry rub that the Squeals Like a Pig competition team shared on barbecue Pitmasters.

Putting It All Together

Now that you have seen all of the individual steps of preparing a pork butt let’s take a look at this great video from Chef Tom at All Things BBQ as he preps and smokes two butts from start to finish.  Chef Tom is cooking two butts so he can take one of them off when the Money Muscle is ready for slices and leaves the other one on the pit until it is ready to be used for pulled and chunked pork.

He is using the Smoke on Wheels pork injection and a 50:50 combination of 3 Eyz BBQ original and R Butts R Smokin Ozark Heat for the dry rub.

I hope you picked up a few tips and tricks from this article!  If you are getting ready to smoke some pork butts to feed a crowd then you might also want to read my article How Much Pulled Pork Per Person. 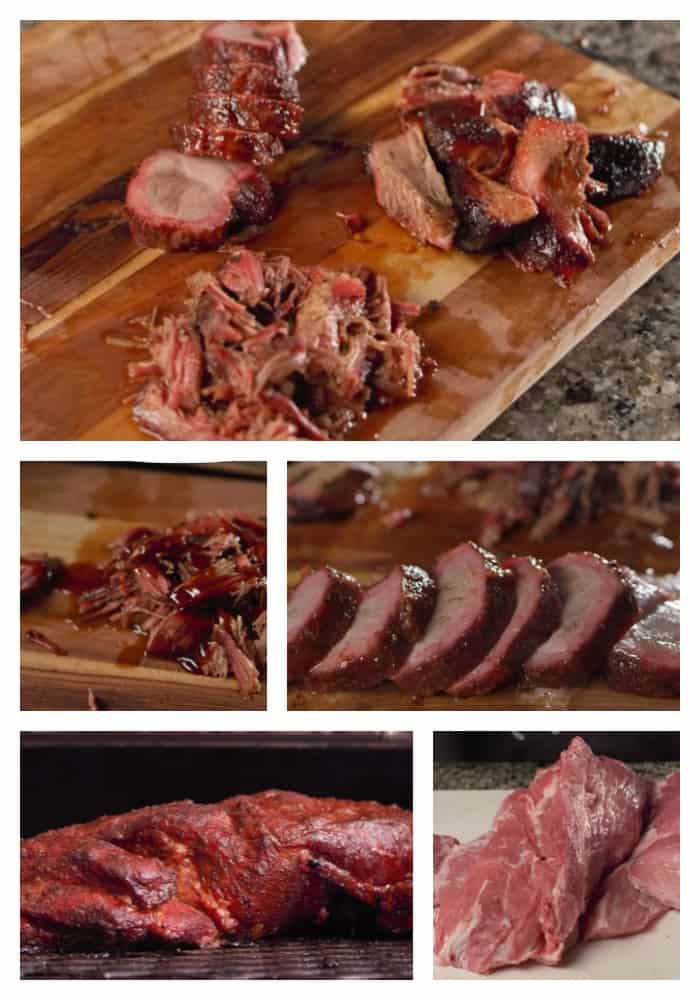