Capicola is a wonderful dry cured salumi that is a standard on antipasto platters and charcuterie boards.  The meat is almost always sliced extremely thin and there are several ways to enjoy this delicious treat.

You will see this cut called “cappacuolo” if you are ordering an Italian sub at Jersey Mike’s.

Let’s take a look at what capicola is, how it is made and what it tastes like.

What Kind of Meat is Capicola?

Capicola is made from pork.  More specifically, it is made from a whole muscle taken from the neck/shoulder region of the hog.  This particular muscle, typically called the “Coppa” weighs about 2.5 pounds and has a great balance of meat and fat.

Here is a nice video showing exactly how this muscle is removed from the “Boston Butt”. These guys go ahead and slice the muscle into steaks instead of using it to make capicola.

So, the first answer to the question of, “What type of meat is capicola?” is that it is a pork muscle from the neck and shoulder region of the hog.  The second answer is that it is meat that has been salted, seasoned and dry cured for months.  After dry curing the meat is safe to consume raw.

How is Capicola Made?

So how do you transform a raw piece of pork into a dry cured delicacy that is safe to eat when it has not been cooked?  While the overall process will sound complex the simple answer is that you get rid of any harmful bacteria that is present on or in the meat and you make the meat inhospitable to any new harmful bacteria that tries taking hold.

To get rid of any harmful bacteria that is present on or in the meat the pork is coated with a curing mixture of salt, nitrite and nitrate.  Other seasonings are also used but those are just for flavor and are not required for the dry curing process.  The pork rests in the “cure mix” for about a week to allow the cure to fully penetrate the meat.

The cure mix goes on a “seek and destroy” mission killing off bacteria.  The nitrite is essential for killing the really nasty critters like botulism.  After the initial dose of nitrite is used up the nitrate in the cure will slowly decompose and release another round of nitrite so the preservation effects will be long lasting.  It is the use of nitrites that gives cured meats their distinctive rosy color.

After the meat has fully cured the cure mixture is rinsed off and the meat is allowed to air dry under controlled temperature and humidity for several months until it has lost about 35% of its weight due to dehydration.  Once the meat has lost that much water there is not enough water left to support any new bacterial growth.  Bacteria has to have plenty of water to thrive and a properly air dried capicola is a low water environment.

Here is a look at one method for producing capicola.  There are a few extra steps used in this particular process are discussed below.

The extra steps for capicola production used in the video above were the use of casing and netting to maintain the shape of the meat while hanging as well as the use of a “starter culture”.

Some people spray the meat with a starter culture of a white bacteria that is perfectly safe for consumption.  The reason for including this step is that if the exterior of the meat is completely covered in a healthy bacteria then there won’t be any room for harmful bacteria to make itself at home.

The use of starter cultures to produce a coating of friendly bacteria is a good idea but is not required.

The hardest part of the whole process is controlling the temperature and humidity while the capicola air dries.  You have to get these right or else the outside of the meat dries out too fast and forms a hard shell that prevents water from the interior of the meat for being able to evaporate.

If you do not have a dedicated curing chamber with temperature and humidity controls….and most of us don’t…then you can still make capicola at home using a special dry curing plastic bag.  The UMAMI dry curing system uses a special type of plastic that lets evaporating water penetrate through the plastic while protecting the meat from any invading bacteria.

Is Coppa The Same as Capicola?

Some people use the term “Coppa” to refer to the muscle that is used for the production of Capicola.  If you have a high quality butcher in your town and ask for coppa then they are probably going to hand you the raw meat.

Some people use the term “Coppa” interchangeably with “Capicola”.   If you see a pack of dry cured, thin sliced coppa in your deli counter then that is the exact same product as capicola. 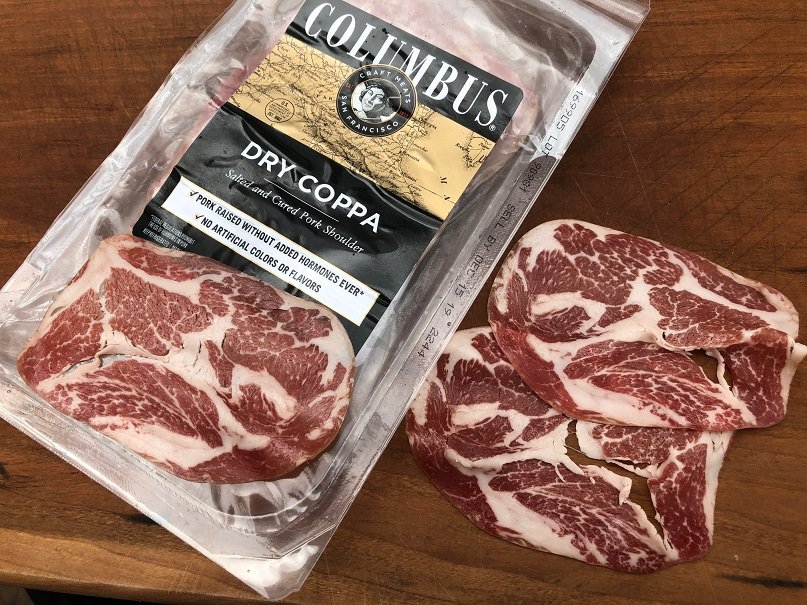 Other names for this cut are coppacolla and gabagool.

Capicola tastes like salty concentrated pork with a little bit of heat.  The spiciness of the meat depends upon the spice mixture used during production as some folks like to coat the meat with various peppers.  Regardless of what spice blend is used the overall heat level is low as the spices are only present on the edge of the meat.

There is a wonderful balance of meat and intramuscular fat in this cut.  The combination of the fat content and the fact that this is a raw, air dried product gives the meat a distinctive “Chew and Melt” feel.

While the size and shape of capicola is similar to a salami the flavor profile is distinctly different.  Salami’s undergo a fermentation step that produces a slight acid “twang”.  Capicola does not ferment so this acidic flavor note is not present.

How To Serve Capicola

I like to use capicola in ways that make sure it is a featured component.  Capicola is spectacular and I do not want it hidden in a dish.

I almost always feature capicola as part of a charcuterie or antipasto platter along with some sliced apples, hard cheeses, pickled or roasted peppers.  It also is great when crisped up and used as a topping for an omelette or salad.  Think of it as “super bacon”.

If I am honest though, I mainly just eat a few slices at a time while standing in front of the refrigerator when I am looking for a quick snack 🙂

Some folks use capicola when making Italian sub sandwiches along with assorted salamis and pepperoni.  Personally I think it is a waste to bury such a beautiful cut under a pile of other meats and a bunch of bread. 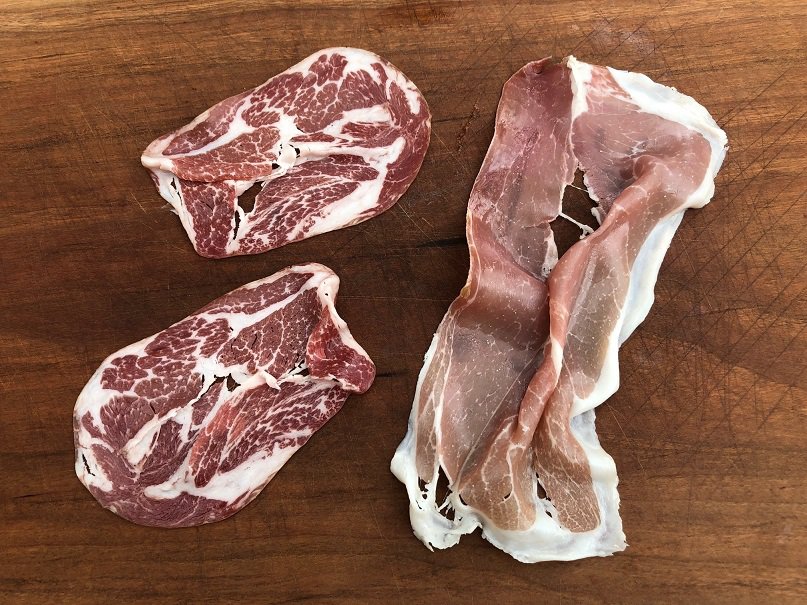 So which of the two is better?  In the head to head battle of Capicola vs Prosciutto I will go with capicola almost every single time!  Don’t get me wrong….prosciutto is GREAT….I just like capicola better.  Here is why I prefer capicola:

Serving Size:  A slice of capicola is perfect for a quick snack.  A slice of prosciutto is more than a mouthful.  I end up tearing the prosciutto in half to make single servings but a lot of times the fat around the edges comes off in the process and I am left chewing a thin strip of fat all by itself.

Cost: Because prosciutto is made from a whole bone in ham it takes a LONG time to dry cure.  Sometimes up to a couple of years.  The long production process raises the cost until, in some cases, it costs twice as much as capicola.  Both of these meats are delicious and I have a hard time justifying the cost of prosciutto when such a high quality alternative is readily available.

Flavor/Texture/Appearance:  The biggest issue for me is the fat distribution between the two choices.  The capicola has beautiful rivers of intramuscular fat woven through the meat while teh prosciutto has a primary band of fat around the outer edge of the meat. The end result is that the capicola looks prettier, has better flavor and is more tender.  This is like the difference between a Ribeye steak and a New York Strip.