Choosing the right meat to cook for a barbecue can be a real challenge.  You want to smoke something that will taste fantastic and feed a crowd.  These two requirements often has people wondering about brisket vs pulled pork and which one should they cook on their smoker.

If you are trying to decide between making a brisket and pulled pork then the primary considerations are:

Let’s look at each of these differences in more detail. 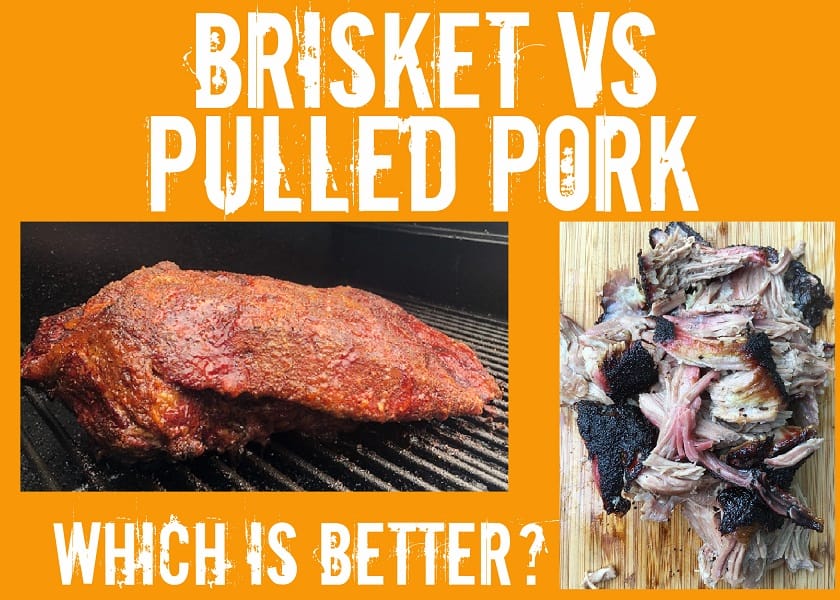 It is hard to ignore the obvious price difference between beef and pork.

The exact price difference is going to vary depending upon the grade of beef, where you are in the country, etc. but, in general, brisket will cost you 3-4 times as much as pork on a per pound basis.

To get a better idea on costs and how much raw meat you will need for your barbecue you can check out the following two resources:

Pulled Pork is Easier to Cook than Brisket

It is, without a doubt, much easier to cook pulled pork than a brisket.

To make pulled pork you just need to throw some rub on a pork butt, set your smoker to 250-275F and after about 5-6 hours wrap it tightly in aluminum foil.  After the butt has been wrapped in foil you let it cook for another 5 hours until the meat is as tender as butter.

A brisket is much tougher to cook because it is composed of two very different muscles, the point and the flat.  The “point” is extremely fatty while the “flat” is very lean.  Trying to get the flat tender without it drying out is one of the greatest challenges in the world of barbecue.

It is not uncommon to have to smoke a brisket for 15 hours and even after that much cook time it still needs to rest for at least an hour before slicing.  See How Long to Smoke a Brisket for more detailed information.

The one chance you have to level the playing field is if you cook the brisket so long that it completely falls apart and you end up making pulled brisket.  Pulled and shredded brisket is great for sandwiches but isn’t exactly the barbecue experience that most people associate with brisket.

Different Side Dishes and Sauces for Each Meat

The meat is only a portion of what you serve at a barbecue so take some time to consider what type of side dishes you enjoy.  It turns out that the sides that work really well with brisket are quite different than what you should serve with pulled pork.

Side Dishes for Brisket

Brisket has a strong, earthy flavor profile and is complimented by sides that can stand up to the beef.  Some of the classic side dishes for brisket include the following:

Side Dishes for Pulled Pork

In contrast to brisket, pulled pork has a rich sweetness that pairs well with sweet and creamy flavor profiles.  Some of the classic side dishes for pulled pork include the following:

How to Deal with Leftovers

When you cook either brisket or pulled pork you will usually have some leftover meat.

I like to divide the pulled pork into half pound portions, vacuum seal them and put them in the freezer.  It is really easy to reheat the pork, either by simmering in a water bath or by using a microwave.  The half pound portions are about the right size for feeding two people and are highly manageable.

Leftover brisket is a little harder to deal with.  When I cook a brisket I tend to slice it as it is being served so I don’t have slices sitting around and drying out.  This means any leftovers are typically in the form of a partially sliced brisket flat.  It is really hard to reheat brisket slices without them drying out so I will vacuum seal and freeze the intact flat.

Leftover brisket is much more versatile than leftover pulled pork.  I love using leftover brisket for chili, breakfast tacos, twice baked potatoes or even as a topping for a Caesar salad.  The sweetness of pulled pork limits what types of dishes it will work with.

There are a lot of differences between brisket and pulled pork. While a perfectly executed brisket is a true work of culinary art the reality is that it is a tough trick to pull off and pulled pork has a much better chance of success.

For most folks the budgetary considerations as well as the ease of preparation make cooking pulled pork the preferred choice.