When folks want to take their smoked brisket to the next level they start using injections.  This article will cover: 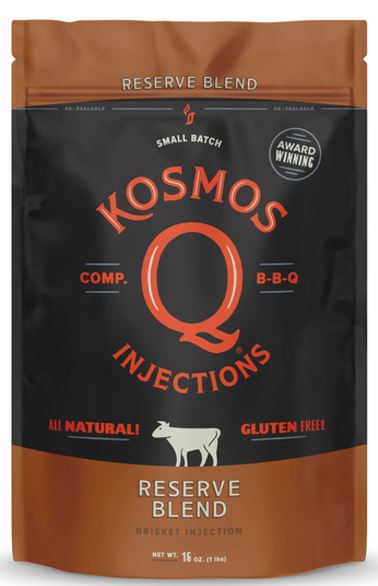 Why Inject a Brisket?

The problem of dry briskets can be partially solved by using Prime or Kobe beef but that solution is too expensive for many home cooks.  The problem of a bland interior is extremely prevalent among cooks using pellet cookers or electric smokers where the smoke profile is not particularly strong.

Using an injection keeps the brisket moist and flavorful.

Here are two of the best injection recipes you can make at home.  These formulations are simple but powerful.

While this recipe looks pretty simple the bullion cubes bring a lot of ingredients to the party.  The cubes typically contain salt, MSG, disodium guanylate, disodium inosinate and beef extract that work together to provide an enhanced beef flavor.  The cubes also contain hydrolyzed soy protein which provides some depth to the flavor profile.

Here is the injection recipe that is part of Myron Mixon’s brisket technique.

There are strong arguments made by World Championship winning pitmasters about why you should be injecting WITH or AGAINST the brisket grain.  The videos at the end of this article explain this in more depth.
Keyword Brisket Injection

While the two recipes above are excellent starting points most people who are serious about injections eventually switch over to commercial competition grade products.  The two biggest differences between the commercial injections and the homemade recipes is the amount of hydrolyzed vegetable proteins and the use of phosphates.

Hydrolyzed vegetable proteins are used to bring out latent taste characteristics, and generally round off and improve the flavor foods.  Phosphates serve many complex functions in injections and they are not all well understood.  Phosphates are used in many food products as an emulsifier to prevent the separation of fats. Phosphates are also used to greatly increase moisture retention.

Here are some of the most successful competition brisket injections used on the KCBS circuit.  All of these commercial injections are great.  I can’t tell you which one is best because that will really depend upon your cooking style and the flavor profiles you are shooting for with your rub and sauce.

The folks at Kosmos Q are World Championship Barbecue Winners (2015) and are sharing their award winning products with the public.  Kosmos offers three different brisket injections that have slight variations in flavor profiles:

The folks at Butcher’s BBQ are World Championship Barbecue Winners (2012) and have been in the meat business for over 30 years.  To the best of my knowledge, more competition teams use the Butcher’s BBQ injection than any other product.

Out of the three products the Prime is the most popular.

Here is a great video from Pitmaster Harry Soo doing a Side by Side comparison of six of the most popular commercial beef injection products.  The video is absolutely worth watching and will introduce you to some nice products.

How to Inject a Brisket

After injecting, pat the excess moisture from the surface and let the brisket rest for at least an hour before putting it on the pit.  The resting period will give the injection time to evenly distribute throughout the brisket and allow the phosphates a little extra time to work their magic.

There are many debates in the world of cooking briskets like:

Another debate is whether you should inject the brisket WITH or AGAINST the grain of the meat.

David Bouska is the owner of Butcher BBQ and makes one of the most popular commercial injections.  David is also a two time World Champion so it is fair to say he knows what he is talking about.

Here is a nice video by Pitmaster David Bouska that shows you how to inject AGAINST the grain.

On the other side of the coin is the winningest man in barbecue, Myron Mixon.  Here is a video with Myron telling you that you should inject briskets WITH the grain to minimize streaking.

Both of these guys are brisket masters and I don’t have a leg to stand on when it comes to telling you who has the better method.