It is easy to get confused when you are trying to figure out the differences between German sausages.  This is especially true when you consider all of the regional variations that exist for the different types of sausage.

Let’s take a shot at explaining the difference between two of the most popular German sausages, bratwurst and bockwurst.

Both of these sausages are traditionally made from a combination of pork and veal.  The major differences between bratwurst and bockwurst include:

Let’s look at each of these differences in more detail. 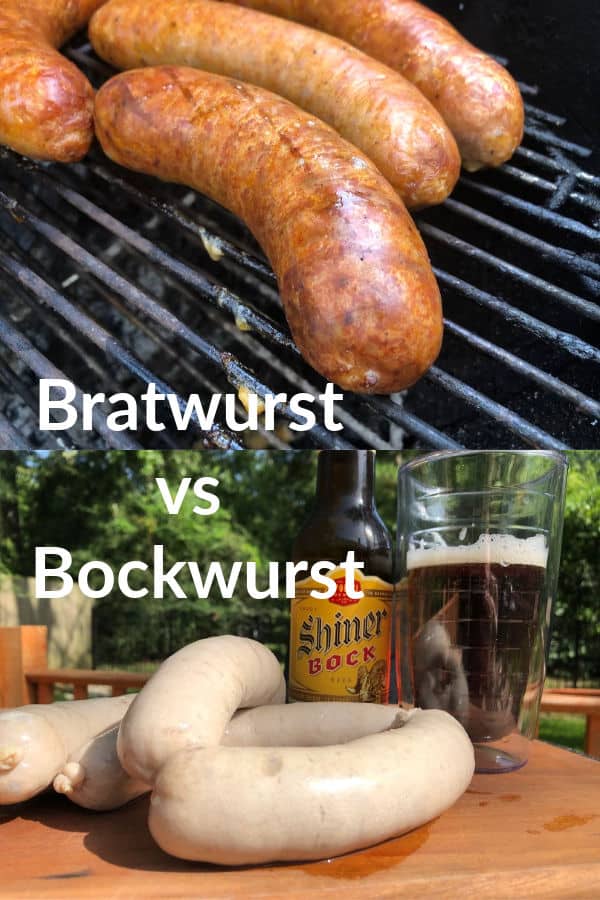 Both sausages are extremely rich and are often made with cream and eggs.  The ratio of pork to veal varies greatly depending upon the regional preferences and relative costs of the two meats. Often the veal is either omitted or replaced with turkey.  The primary differences in flavor comes down to the spice blends in which we find:

The most notable difference between these two sausages is how they look.

Bockwurst is always a pale, white sausage.  Bockwurst is also emulsified before stuffing which provides a smooth texture when cooked.

Bratwurst is typically a grey sausage that is coarsely ground before cooking.  This sausage has a coarse texture when cooked.

Bratwurst are typically grilled but can be baked or cooked in a skillet.  They are best when grilled and simmered in a beer/onion bath either before or after grilling.  Some people prefer to smoke their bratwurst.

Bockwurst should be gently poached to preserve their white color.  You could grill of smoke a bockwurst but it would taint the presentation.

When the traditional casings are used it makes the bockwurst look like a long, white hot dog.  I break with tradition and stuff bockwurst into 32 mm hog casings since that is what I have a steady supply of.

Since bockwurst is poached the casing has a little more “chew” that you get with a grilled bratwurst.  For that reason a lot of people prefer to remove the casing from bockwurst before eating.

I would take a bratwurst over a bockwurst any day of the week.

Bockwurst is fine but, for me at least, is a little fussy.  Traditionally bockwurst were made and served for festivals and celebrations and I suspect the extra care that went into making this sausage was a reflection of the importance of the festivities.  While I can respect that, I don’t really appreciate it.

I think a sausage ought to be fun, hearty and delicious, not dainty and special.

But that’s just me.