Although mortadella is distantly related to the popular American lunch meat that we refer to as bologna, there are significant and important differences between the two cured meats.

Many people on this side of the Atlantic have never heard of mortadella, but it’s an incredibly popular lunch meat and antipasto offering in Italy, and it’s gaining popularity around the world as well. If you already like bologna, then you will love mortadella, so keep reading to learn more about this traditional Italian delicacy. 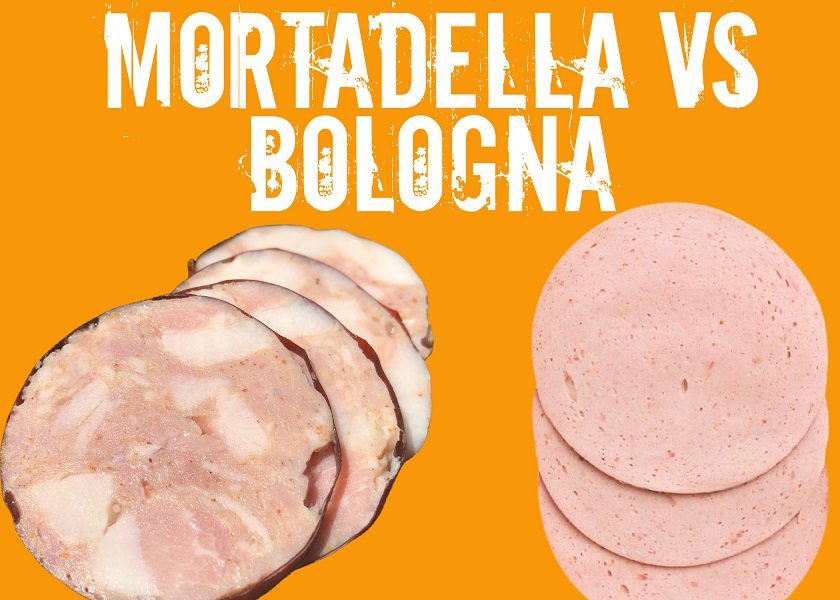 The main differences between bologna and mortadella are:

Let’s look at each of these differences in more detail!

What are the Ingredients in Mortadella and Bologna?

While both bologna and mortadella can be made from high-quality pork meat and spices, only mortadella must use a certain quality of ingredients.

The Main Ingredients in Mortadella

Mortadella, which is also sometimes called mortadella bologna, is a traditional Italian lunch meat that dates all the way back to the 14th century. Authentic mortadella actually has Protected Geographical Indication status (PGI), which means that the quality, ingredients, and origin of mortadella with this mark are guaranteed.

The basic recipe for mortadella is made exclusively from high-quality pork meat that is finely ground, mixed with chunks of pork neck fat, and then seasoned with black peppercorns, salt, and myrtle berries. Sometimes mortabella makers build on this recipe, adding additional spices such as coriander, caraway, cloves, and nutmeg, as well as olives, pistachios, pine nuts, and more.

The addition of whole pieces of pork neck fat lends mortadella a beautifully marbled appearance and a silky, delicate mouthfeel.

The Main Ingredients in Bologna

As we mentioned above, bologna can be made from high-quality pork meat from the neck, shoulder, or belly, just like mortadella. However, it’s more common for bologna to be made from many different kinds of meat, including chicken, beef, veal, or venison.

It’s also possible for bologna to be made from the trimmings and ground up meat scraps created in the production of other, higher-quality meats. However, this practice is becoming less common due to evolving consumer consciousness. If you like the taste of bologna but want to be sure you’re buying quality, just remember to look at the ingredients list and choose a lunch meat made from pork and not other meats or pork byproducts.

The meats used to make bologna are finely ground and then seasoned with a blend of peppercorns, salt, myrtle berries, and other spices meant to mimic mortadella’s signature taste. It is common for mass-produced bolognas to also include added sugar or corn syrup, which replaces the beautiful fat used in mortadella.

How are Mortadella and Bologna Made?

While both mortadella and bologna are considered sausages and are made by cooking and then curing ground meat and spices, there are a few key differences to consider.

The Makings of Mortadella

Mortadella is made by mixing finely ground, high-quality pork with spices, pork neck fat, and other ingredients such as olives and pistachios. This mixture is then pressed into an all-natural, inedible casing and, typically, tied with string and hung in a hot air dryer to cook for hours or even days. The sausage is then cured, which means it does contain nitrites and nitrates—although mortadella usually contains fewer preservatives than bologna, and there are smoked or dried versions available as well.

The Makings of Bologna

Bologna is made in a similar way. The ingredients are ground and mixed together, then pressed into an inedible casing to be cooked and cured. There are differences in the process, though, which create immense differences in the appearance, taste, and texture of the two meats.

While mortadella is typically studded with whole ingredients like pork fat, peppercorns, nuts, or fruits, the USDA states all hot dogs or other cooked sausages such as bologna must be comminuted. In other words, no matter what ingredients are used in bologna, they must be ground down into minute particles until they are indistinguishable from one another.

To accomplish this, sometimes bologna manufacturers use mechanically-separated meat, which is created by forcing bones and meat through a sieve under high pressure to separate the two, turning the meat into something resembling a paste or batter.

As a result of the different processes, mortadella usually has varied colors and textures and more subtle variations in taste while bologna is typically uniform in color, texture, and taste throughout.

How are Mortadella and Bologna Used?

While it’s common to find both mortadella and bologna between two slices of bread, mortadella is also served as a stand-alone meat on charcuterie boards or as an antipasto.

Italians love their mortadella, consuming around 160,000 tons of the meat every year. Although they do often use the meat in sandwiches, just like bologna, they are more likely to slice mortadella thin like a deli meat as opposed to the thick slices we’re used to. In fact, traditional mortadella along with Genoa salami and ham is the trio most submarine shops use to make their Italian subs.

In addition to its use as a deli meat, Italians like to slice mortadella thick like a summer sausage or dice it into cubes to include on a charcuterie board, shave it super thin and serve it like prosciutto alongside melon, cube it for chef salads, serve it drizzled with olive oil as an antipasto, or even saute it and toss it with pasta.

The Uses for Bologna

In contrast, bologna is usually considered only as a sandwich meat, sliced thick and stuck between two slices of white bread with some processed cheese. Or, sometimes, pan-fried to bring out the smoky flavors and then added to a sandwich.

Ok. That may be a little unfair. Bologna is actually making a bit of a comeback these days thanks to the emergence of some small-batch, hand-crafted brands. Even some big-name brands like Boar’s Head take a lot of pride in their craftsmanship and are a far cry from the cheap, pre-packaged stuff you used to get at school.

Bologna may never be as popular as mortadella is in Italy, and it may never be used with as much versatility, but it has become a perfectly healthy, delicious, and tender meat to add to your lunch menu if you know what to look for when you buy.