Bockwurst is a classic German sausage and, like all sausages, many different recipes and stories of origins exist.  This white, emulsified sausage is traditionally made from pork and veal and is cooked by poaching.  This sausage is very similar to weisswurst and the two are often confused.

Let’s take a closer look at this sausage, compare a few recipes and I’ll show you how I make mine. 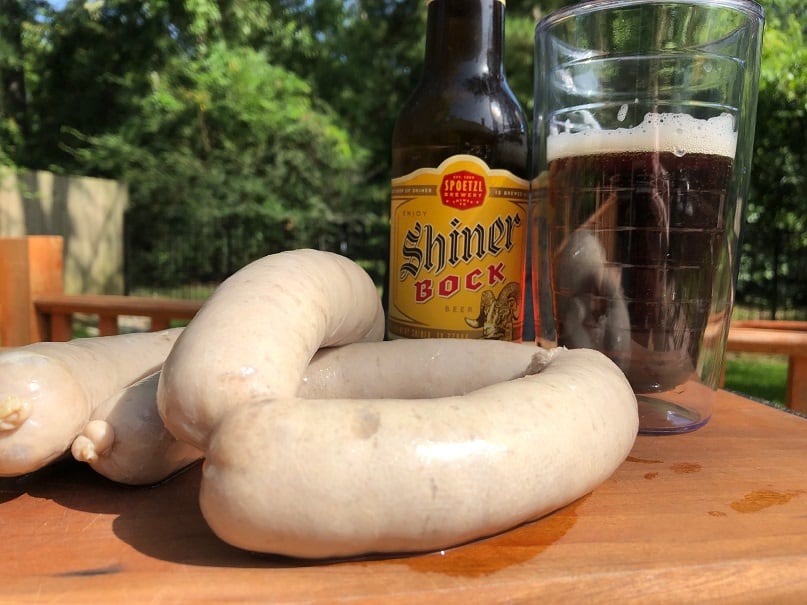 I spent a lot of time going down rabbit holes to figure out the history, recipe and cooking technique for this sausage.  Like all things sausage, the process was messy.

Let’s start with the name of “Bock” which is a reference to a style of beer.  Some people say the name is a result of:

I’m am going with the last explanation by process of elimination.

The white color of this sausage is one of its defining characteristics.  Bock is a dark style beer and I would not add a dark beer, or use a dark beer to poach, a sausage that I want to be as white as possible.

I usually go with the recipes from Rytec Kutas’ classic text, Great Sausage Recipes and Meat Curing, when I want to learn how a particular sausage ought to be made.  Here are the ingredients Rytec suggests for bockwurst but scaled down to a five pound batch.

I didn’t like that the Kutas recipe was vague on the amount of parsley and green onions so I checked Bruce Aidells’s classic, Complete Sausage Book, to see what he suggested.  For a four pound batch of sausage Bruce suggests using:

The other ingredients provided by Bruce are pretty similar to the above recipe with the exception that he uses a little less veal and makes up the difference with ground, skin on, chicken thighs.

I also checked Len Poli’s recipe and saw that it just used a little parsley, 1 tablespoon of dried, and did not include chopped onions of any kind.

I wanted you to have the recipes above because if you want to make the classic sausage then that is what you should use.  When I was playing around in the kitchen I wanted to make my own version of a Bockwurst so I changed things up a little.

How to Make This Sausage

Yeah, yeah…I should have chopped up a bunch of parsley and green onions.  I couldn’t be bothered.  That is what is great about sausage; you can do whatever you want!

Combine all of the ingredients and blend until a smooth paste is formed.  You can use a spoon but a stand mixer with the paddle attachment does a better job in less time (2 minutes). 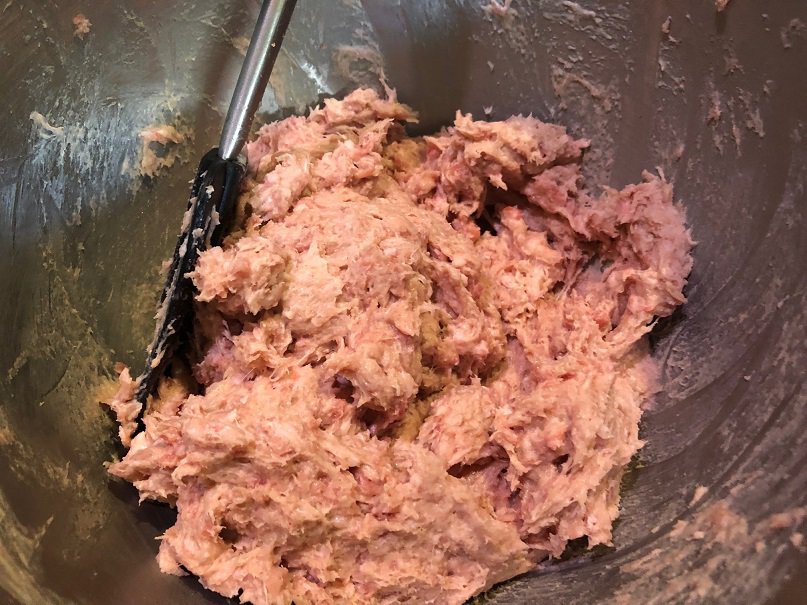 Put the mixture in the refrigerator for 30 minutes to let the fats chill and the flavors meld.

Add the links to a pot of 170F water and allow the sausages to poach for about 20 minutes.  The sausages will want to float so you will need to weigh them down. 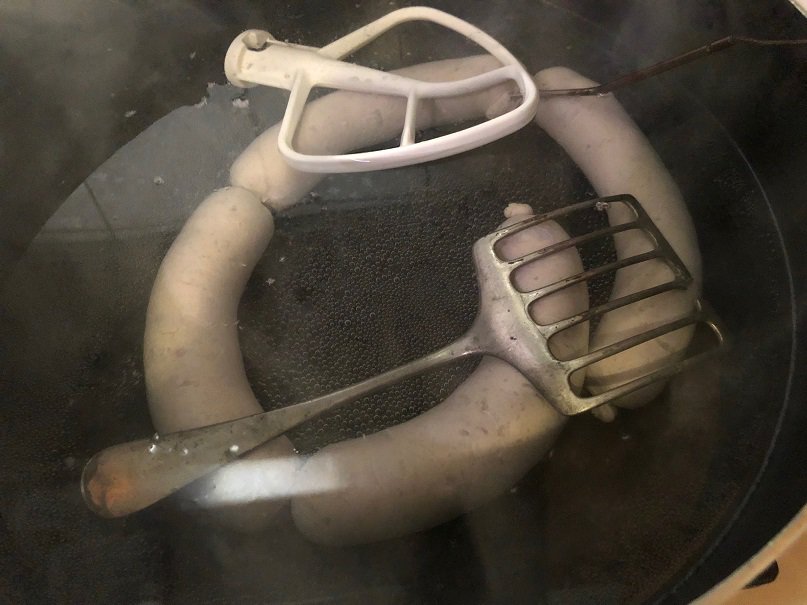 When the sausage reaches the target internal temperature remove them from the poaching liquid and add them to an ice bath to stop the cooking process.  Let the sausages cool for about 5 minutes and then move them to the refrigerator until you are ready to use. 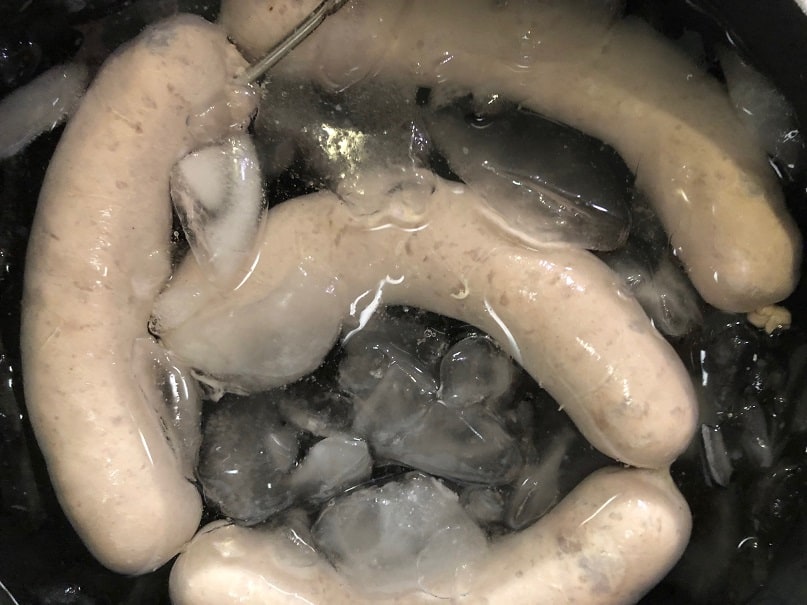 Of course, there is nothing stopping you from slicing these open right away and digging into some great eats! 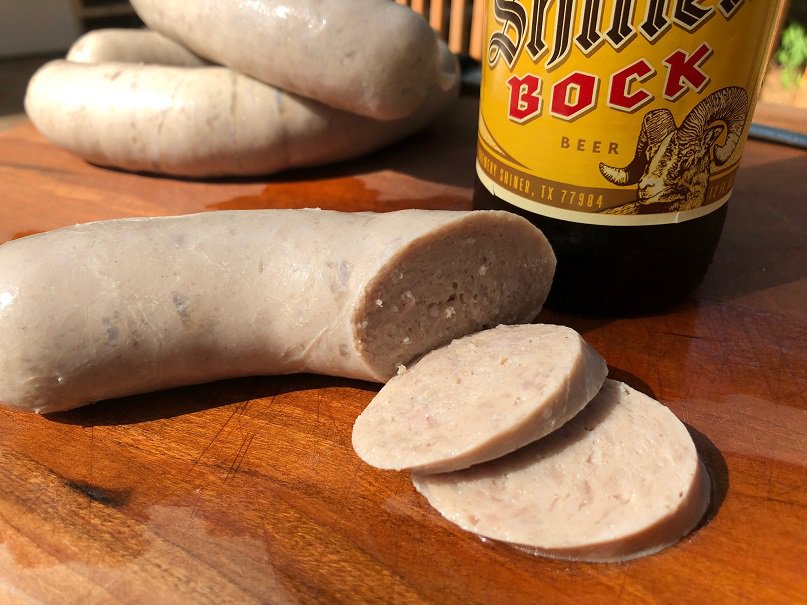 A Note About the Cooking Method

When I was researching this sausage I saw quite a few “Internet Specials” that state that this is a smoked or grilled sausage.  While you certainly can smoke or grill this sausage if you want, I do believe the proper method of cooking is to poach.

A defining characteristic of this sausage is how white it is.  Smoking or grilling would alter the color completely.

It is not a big deal and I am all for breaking traditions…just wanted to share my take on things.

A Note About the Sausage Casing

Because the sausage is poached and then chilled the casing does not have the same great crunch or snap that you get with a sausage like knackwurst.  While the casing is perfectly edible on this sausage it can be a bit chewy and as a result some people prefer to remove the casing before eating.

Are Bockwurst and Weisswurst the Same Sausage?

Since one of the defining characteristics of bockwurst is the whiteness of the sausage it leads to some confusion with another white sausage, weisswurst. In fact, the name “weisswurst” literally means “white sausage”. I have seen several online sources, including one sausage producer, that use the terms “bockwurst” and “weisswurst” interchangeably.

In Charcuterie, by Ruhlman and Polcyn, weisswurst is defined as a sausage “in which the fat equals 50 percent of the total meat and water” which is a considerably higher fat content than any bockwurst recipe that I have seen. Additionally, both Rytek Kutas and Len Poli list the two sausages as different and provide a recipe for each. FYI..here is Len Poli’s weisswurst recipe.

The bockwurst can be stored in the refrigerator for about 5 days.  The sausages are easily reheated in the oven or on a grill.
Keyword Bockwurst Sausage