When it comes to gas fired griddles the standard choice has been between Blackstone and Camp Chef.  If you do your shopping at Lowes then you might have noticed a new player in the griddle market, Blue Rhino.

For those of you short on time the short version is do NOT buy a Blue Rhino griddle.  The Blue Rhino products look amazing and get great reviews.  However, there is a legitimate, non-political, reason to really dislike this company and I do not believe the grilling community should do anything to support them.

Let’s take a closer look at the griddles that carry the Blue Rhino badge, check out the reviews and decide if this is a company that you want to support.

As of June 2020 there are three griddles in the Blue Rhino lineup. 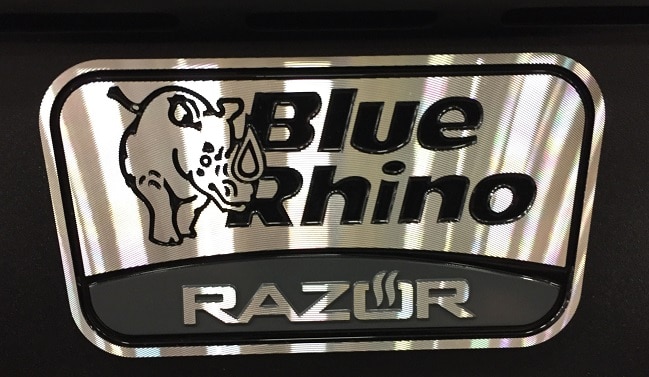 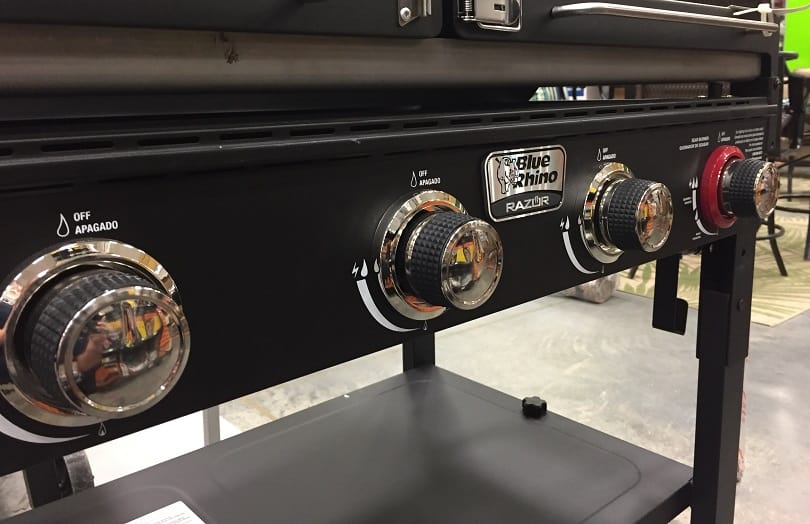 This looks and feels like a solid griddle.  One feature that I love is that the griddle comes with a built in folding metal cover that opens up to provide two massive side tables. 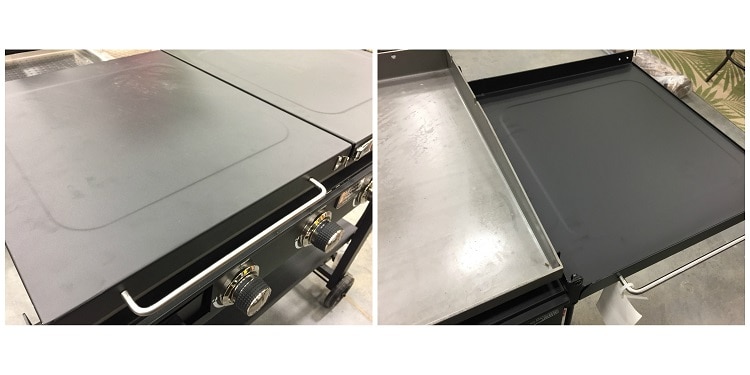 I checked the space between the two sides of the cover when it was closed and it looked TIGHT.  You might get some water coming through when it rains but I sure as heck couldn’t see how.  The latches on the front and back of the lid makes sure the fit is snug.

The burners are interesting and can provide 62,000 BTU/hr of heat. 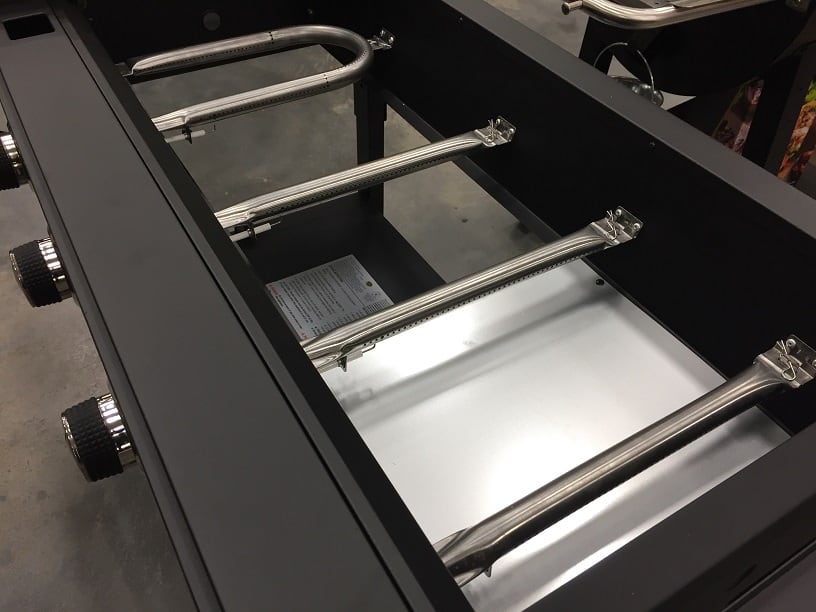 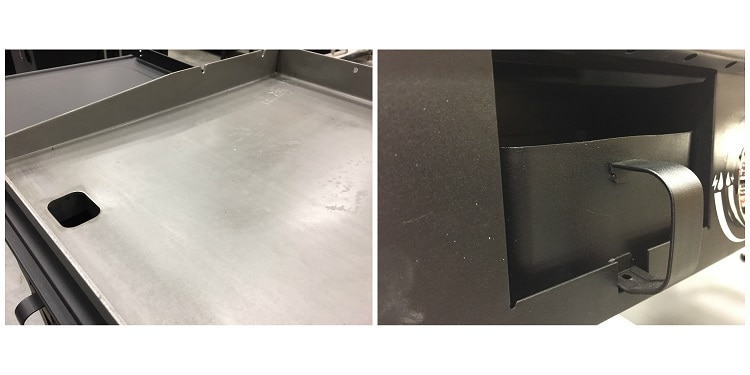 The grease drainage system is highly functional but has one minor issue.  The grease collection cup is medium sized and will fill up quick if you are cooking for a LOT of people.  You will need to keep an eye on your grease levels to make sure you don’t get an overflow. 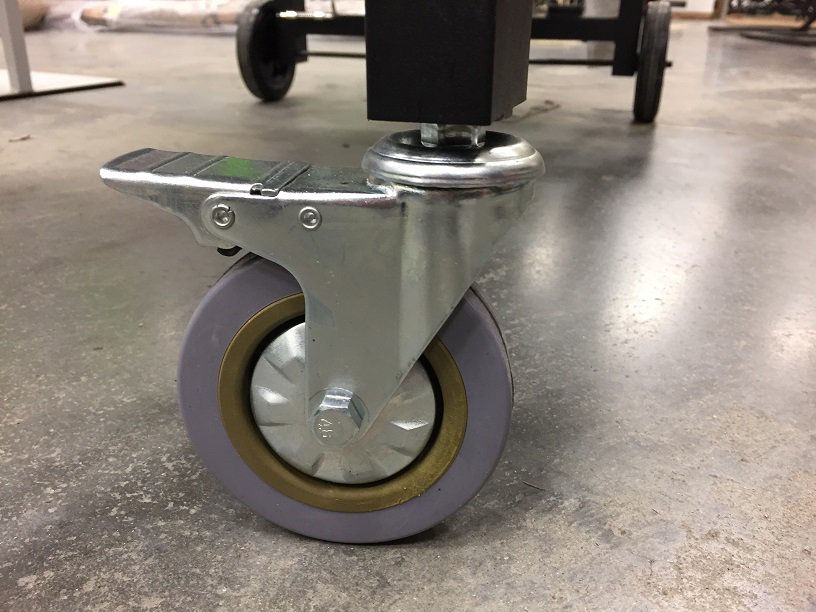 By having wheels on all four legs the Blue Rhino griddle is easy to move but will be next to impossible to level out if you are cooking on an uneven surface.

As of June 16, 2020 there were 264 reviews for this griddle on Lowes website.  Here is a summary of what people think about the product.

The most common complaints with the product include warping of the griddle along with excessive rust.

Head to Head Against Blackstone 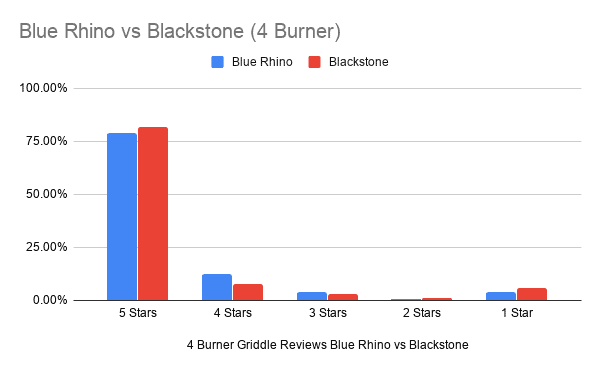 The reviews for the two brands are extremely similar with people really liking both products.

Blue Rhino has a two burner griddle that is mounted on a rollable cart. 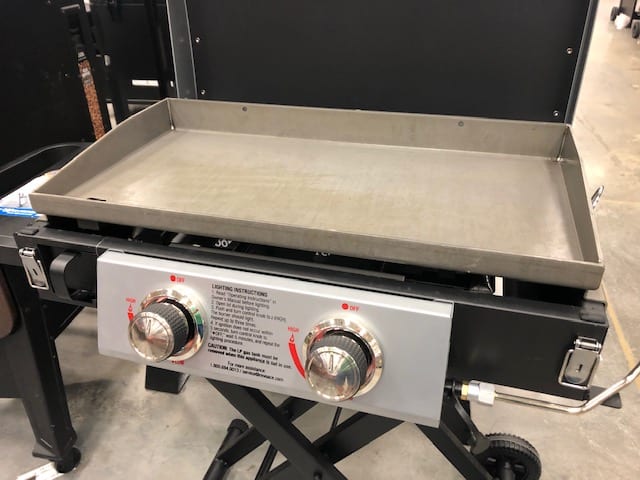 The griddle is fired by two semi-circular burners which provide nice heat distribution across the surface.   The griddle is set up for using a disposable one pound propane cylinder but you can use an adapter to hook up a full sized propane tank.

Lifting on side of the cart and rolling the griddle around is extremely easy so you shouldn’t have any problems moving it if you need to do so.  The lid latches securely in place and looks pretty when not in use.

This griddle is comparable in size (318 sq in) to the Blackstone 22 inch griddle (352 sq in) which is available as a tabletop griddle or a cart mounted version.  The cart for the Blackstone 22 does not have wheels and is harder to move.

This product is new for the 2020 grilling season so there are not currently enough reviews to make a true head to head comparison against the equivalent Blackstone.  However, the limited number of reviews (24 as of June 12, 2020) are positive overall and there is every indication that this is a nice product.

Blue Rhino also makes a single burner portable gas griddle that looks to be equivalent to the Blackstone 17. 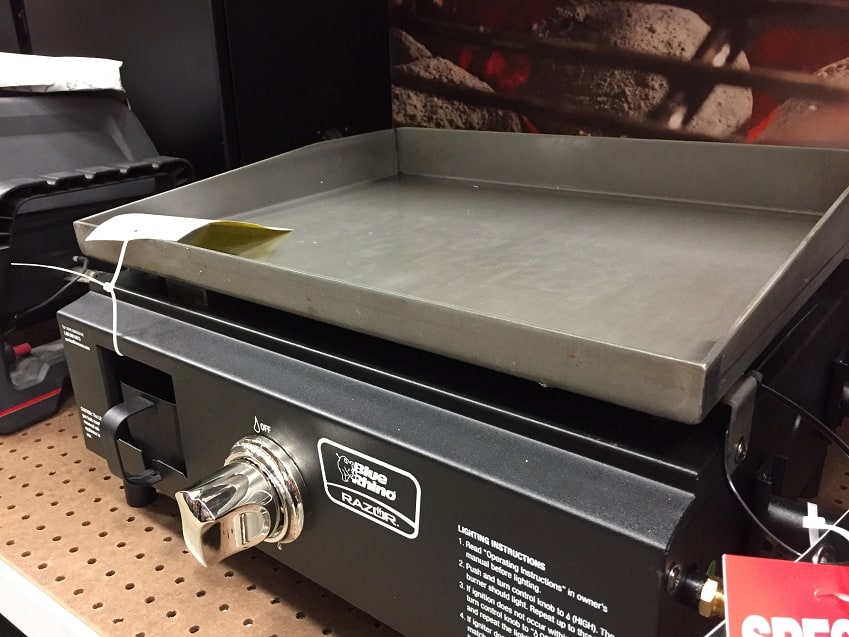 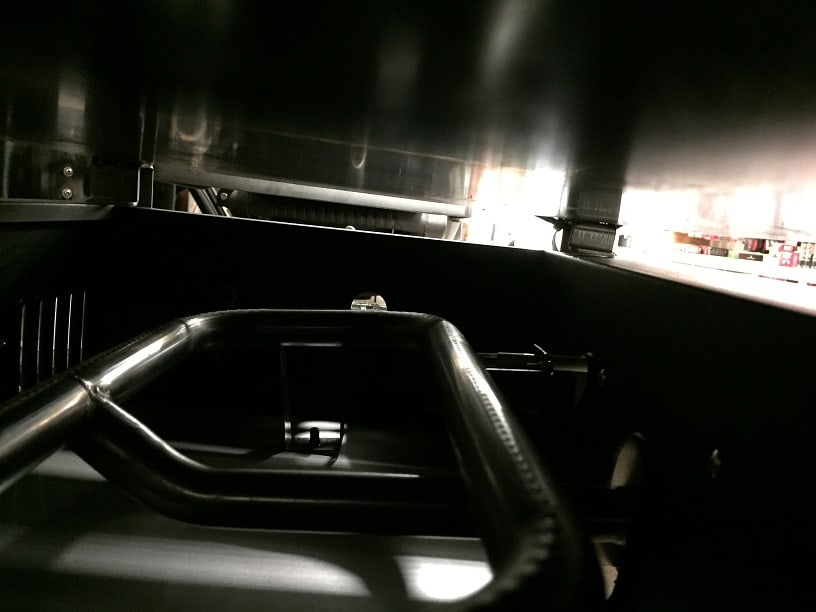 I can’t tell you which burner configuration is better and I would be surprised if you would notice much performance difference between them.  The circular burner is very similar to what you get on the Weber Q2200 and that works pretty well. 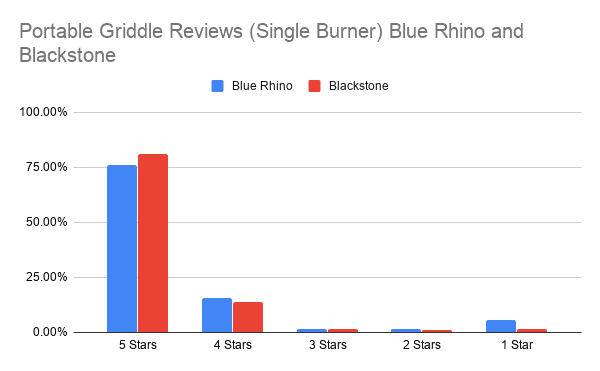 Personally I think all of the Blue Rhino griddles look pretty nice and I can understand why folks are going to buy them.

Before you go out and buy one of these griddles I want you to know that Blue Rhino ripped of backyard grillers like you and me for years.

In 2008 Blue Rhino conspired with AmeriGas Propane Exchange to give you less propane for the same price.  Instead of filling your 20 pound tank to the industry standard of 17 pounds they decided to only fill to 15 pounds while keeping the price the same.

This price fixing arrangement was finally busted up by the Federal Trade Commission in 2014.

Let’s be perfectly clear…if you bought a tank of propane between 2008 and 2014 then chances are that you got a screwing compliments of Blue Rhino.

Please do NOT give this company any more money.

Do everyone a favor and take a pass on these griddles.  Go with Blackstone, Nexgrill, Pit Boss or Camp Chef instead.