I wanted to come up with a better brisket rub recipe than the one I had been using for the past few years and decided to do a little “shigging”. “Shigging” is a term used on the competition barbecue circuit and refers to the process of studying the winning teams to see if you can steal their secrets.

Here was my approach:

All five brisket rubs have the following ingredients in common:

The MSG is Tricky

MSG is only explicitly listed as an ingredient for one of the products (The Most Powerful Stuff) but the flavor profile is there for all of them.

Two of the rubs contain disodium inosinate and disodium guanylate. When these two ingredients are used together they taste just like MSG.

What About Black Pepper?

I was shocked to see that black pepper was not a major ingredient. Black pepper is only listed as an ingredient for two of the five rubs. Maybe it is lumped in there with the generic terms “other spices”

The folks down in Texas swear that all you need for brisket is salt and pepper. I guess that’s a major difference between Texas barbecue and Championship Competition barbecue.

How Much of Each Ingredient?

So now that we know the important base ingredients to use in the rub the question becomes, “How much of each?”

We get a big clue when we go back to the product labels and look at the sodium content. I will save you from doing the math on this one.  These rubs range from 27% salt (Black Ops) to 42% salt (Most Powerful Stuff). I used these guides and dialed my rub into one that is 37.5% salt.

This rub is a flavor backed beast that will take your brisket to the next level. You get salty, sweet, smokey and savory along with a spiciness that builds in layers and grabs your attention. 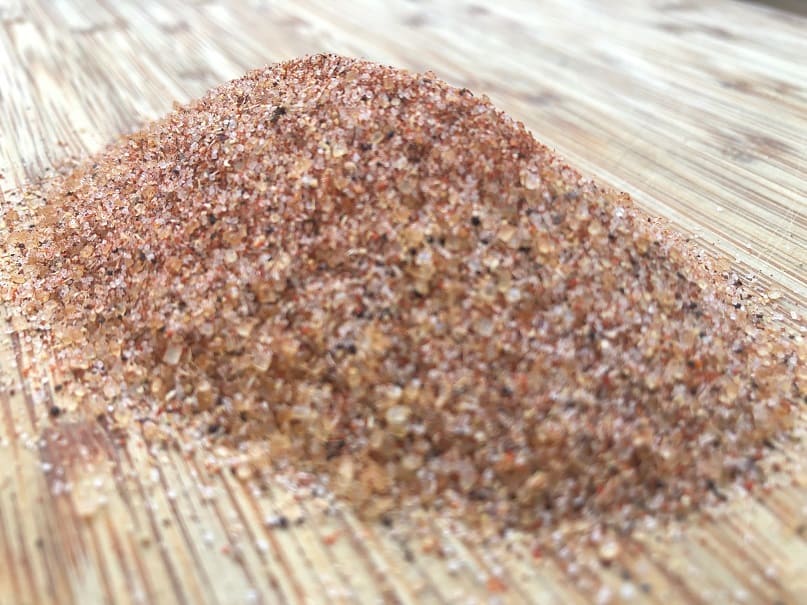 Salt: I use Morton table salt, not kosher. Kosher salt particles are much larger than the particles from the other ingredients and don’t mix as well.

Chiles: Chipotle for the smokey heat. Ancho for the sweet earthiness. Gebhert’s chili powder for the balance of chilis and the extra spices that come along for the ride.

Smoked paprika: If it doesn’t smell amazing then don’t use it.

Sugar: I use turbinado because I like it. You can use white or brown. If you want to make this really good then try using maple sugar.

If you want to learn more about the award winning brisket rubs I modeled my recipe from then keep scrolling. In the paragraph below I share the credentials from the teams/individuals and a few links where you can purchase their competition battle tested rubs. 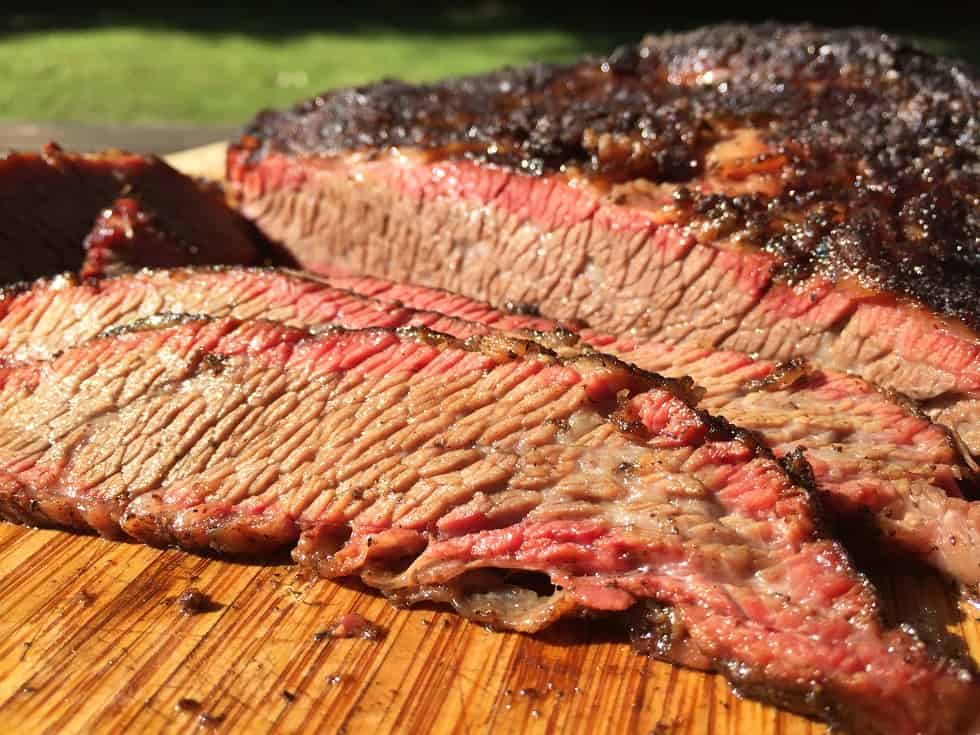 The products listed below are the award winning brisket rub recipes that some of the best pitmasters in barbecue have bottled up and made available to the public. These rubs have helped HUNDREDS of people take walks on the championship stage at KCBS events.  The rubs are listed alphabetically….they are all amazing.

Let’s look at each of these blends and see what makes them great. 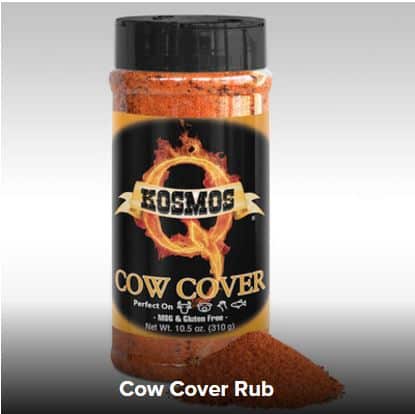 Kosmos was pretty clever with the savory portion of this blend.  The product itself does not contain MSG but does contains disodium inosinate & disodium guanylate.  When you blend these two ingredients together they taste just like MSG.

Disodium inosinate & disodium guanylate are NOT cheap ingredients.  Don’t let the chemical names of these ingredients put you off.  Both products are naturally derived from vegetables.

Care and planning went into nailing the savory aspect of this product.

Cow Cover also contains natural hickory smoke flavors.  This is becoming more and more common on the competition circuit as cooks opt for the precision controlled advantage of pellet grills.

Pellet grills are awesome but they can be a little light on the smoke flavor.  Kosmos takes care of this by adding a little extra smoke of their own.

The extra kiss of smoke from Kosmos’ Cow Cover makes this product a great choice for folks cooking briskets using an electric smoker. 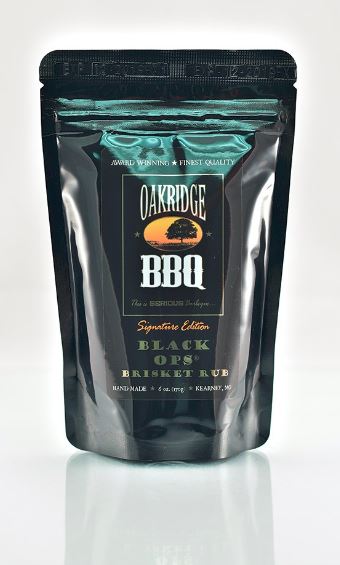 The flavor profile has heat form dried chipotles, savory from garlic pepper and onions, and extreme depth from coffee and shiitake mushrooms.

This product was invented was to be the Godzilla of brisket rubs.

Oakridge converted from being a successful competition team to a provider of rubs and brines just a few years ago.  In that short time the teams that use their products have racked up over 5000 top ten awards. 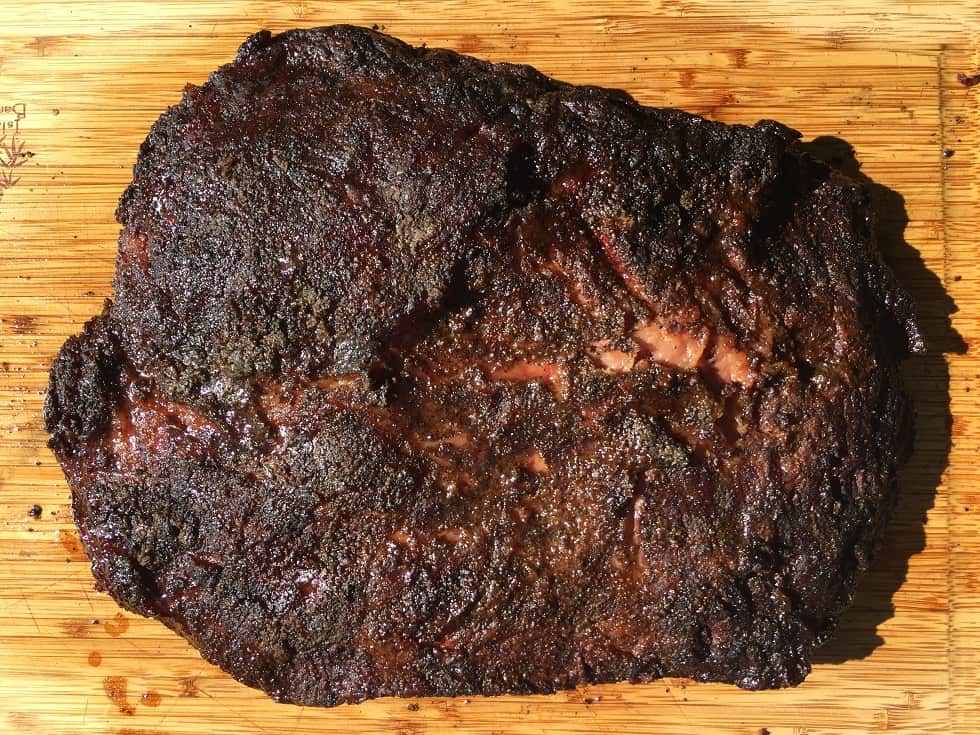 Pellet Envy: The Most Powerful Stuff

The Most Powerful Stuff is a signature rub developed by one of the most successful barbecue cooks in the country, Rod Gray of the Pellet Envy competition team. 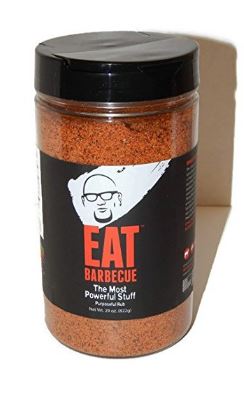 If you are interested in Rod’s barbecue credentials then here is where you can check out his list of 62 Grand Championships.

The Most Powerful Stuff is the only product in this list that uses MSG as an ingredient.  Personally I am a huge MSG fan but some people have a sensitivity.

The Most Powerful Stuff Ingredients

Click Here to Purchase Pellet Envy The Most Powerful Stuff 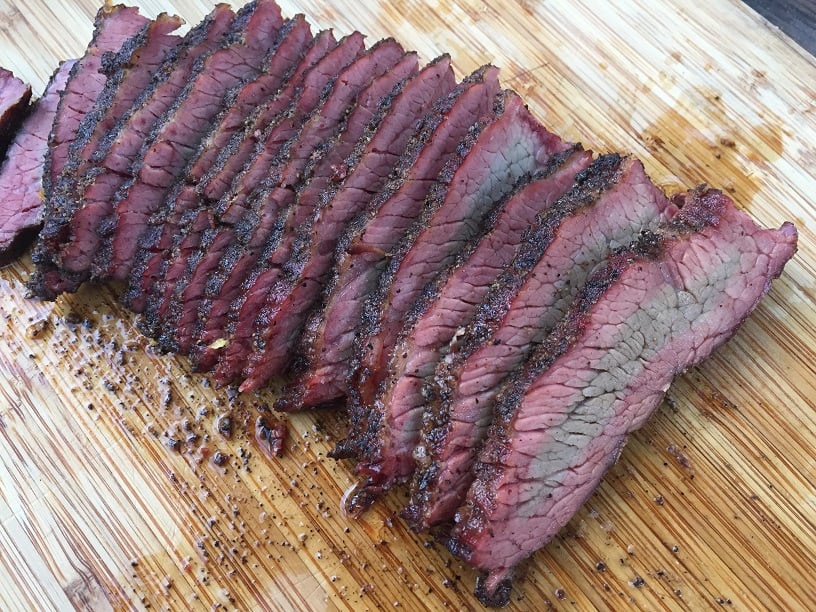 Plowboys Bovine Bold might be the most widely used brisket rub on the KCBS circuit. 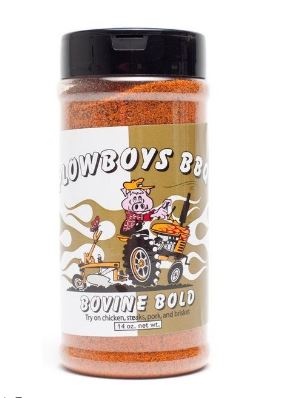 Because this rub is so widely used many teams try to set themselves apart by using this as a base rub and adding a layer of Montreal Steak Seasoning later in the cook.

Plowboy’s uses the same trick as Kosmos and adds disodium inosinate & disodium guanylate to their product to get that deep MSG flavor profile without actually adding any MSG.

The flavor profile is bold, beautiful and complex.  In addition to the standard actors of salt, chilies, garlic and onion they also hit you with tumeric and Worcestershire powder.

I am not a competition guy but after years of experimenting this is the product I keep in my pantry. 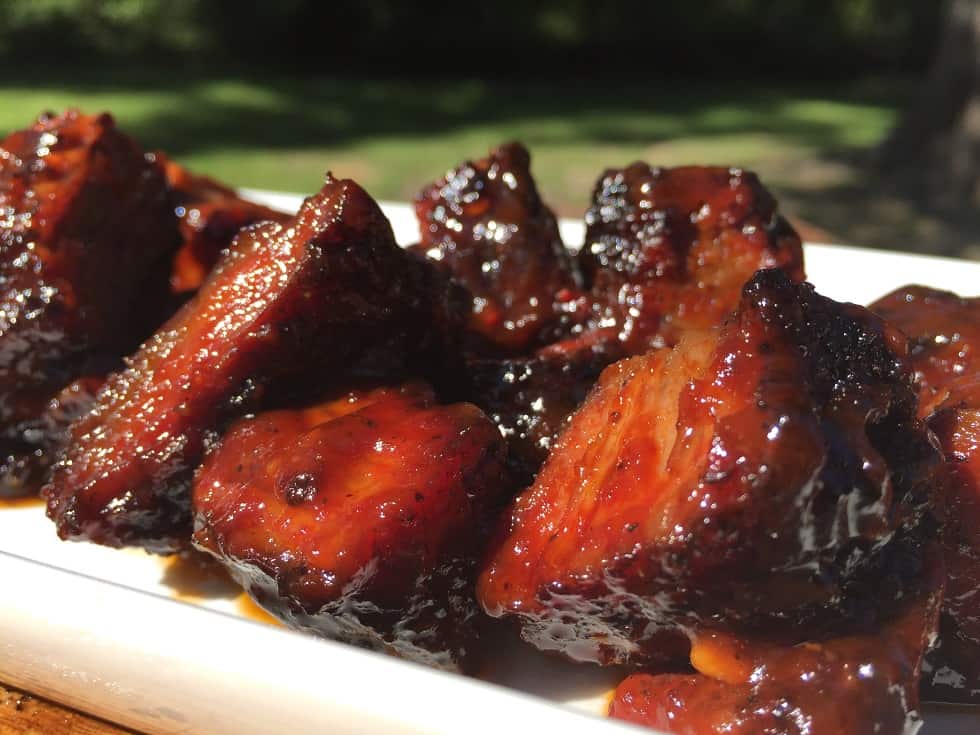 This rub is the “Moola” because it has been bringing home the money for briskets on the competition circuit. 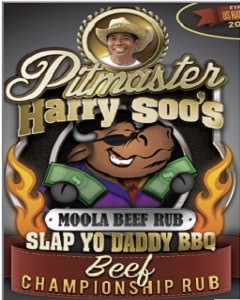 The Slap Yo Daddy barbecue team led, by Pitmaster Harry Soo, developed this rub and they know what they are doing.

Harry has a few awards under his belt.

So, yeah…he knows how to make products that win.  Harry uses maple sugar as a primary ingredient in this rub which gives it a complex and unique flavor profile.

Slap Yo Daddy Beef Moola is “savory with a kick”.  There is a nice level of heat with this brisket rub. 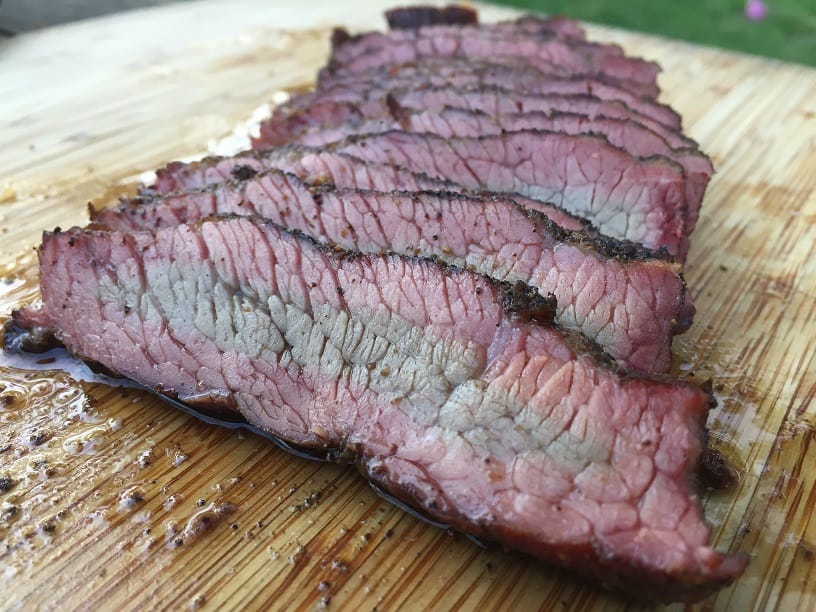 Like I said earlier, when it comes to barbecue there is always a LOT of debate as to what is really the best.

To be honest it often comes down to who you are cooking for and what are their expectations.

I am sure I have left a few great products off of this list. One up and coming product that is getting some serious attention is the Holy Cow rub from Meatchurch.  This product from Matt Pittman has been getting blown up on Instagram and Twitter.

So what about it folks….what are some other GREAT brisket rubs that belong on this list?  Drop me a line in the comments and let other folks know which products you love.